Sleek design and a gorgeous screen are the hallmarks of a new Galaxy Watch that hits slightly more than it misses. 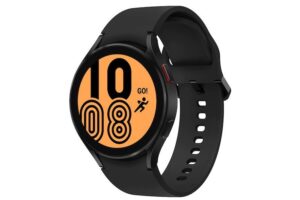 Quick verdict
If you’ve got a compatible Samsung smartphone, the Samsung Galaxy Watch 4 is a fully featured wearable with a gorgeous display that’s mainly held back by average battery life plus some other minor quibbles. For any other Android user, there are key features missing, which should make you reconsider the $449 entry point. Older Galaxy Watch users looking to upgrade may also miss the practical charging cradle.

How much does the Samsung Galaxy Watch 4 cost in Australia?

At the time of writing, the Samsung Galaxy Watch 4 BT 44mm version we were sent to review was available for $449, which is the RRP at all online outlets, including Kogan, Amazon and Samsung. For the smaller 40mm model, you're looking at about $399 from the same retailers.

The Samsung Galaxy Watch 4 comes in incredibly slimline packaging, which immediately tells you that you don’t get a wall charger. You’re either going to have to recycle an existing USB wall charger or use a computer USB port to charge. Outside of this, the Galaxy Watch 4 comes with a quick-start guide, the smartwatch and a magnetic USB wireless charger. 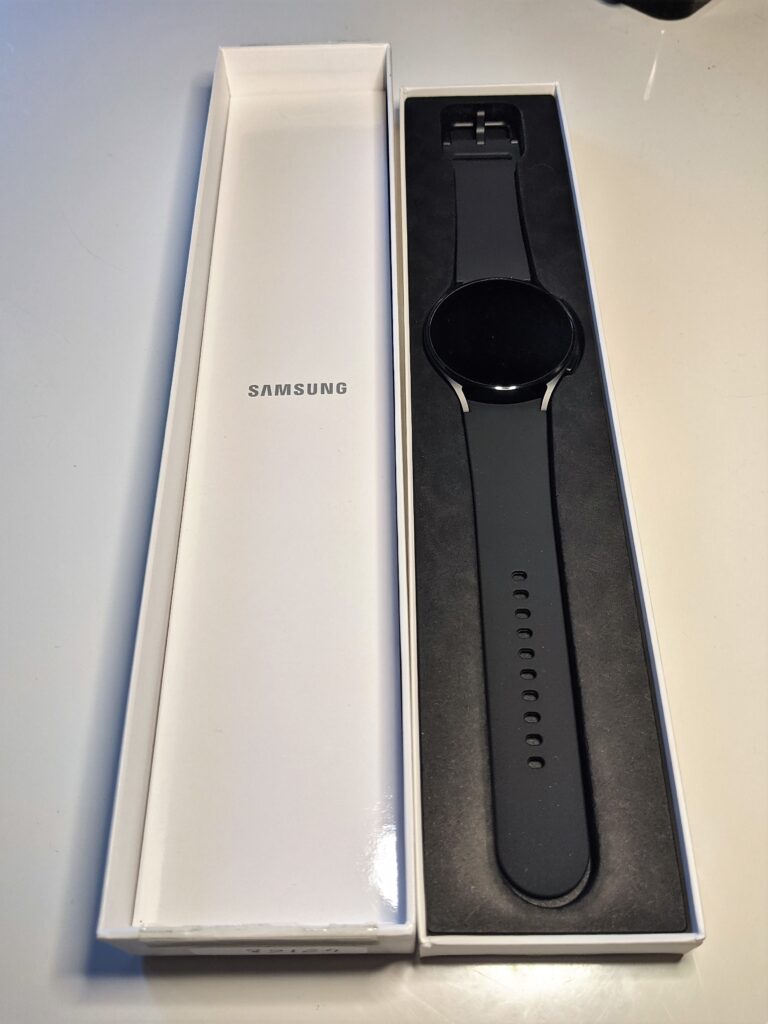 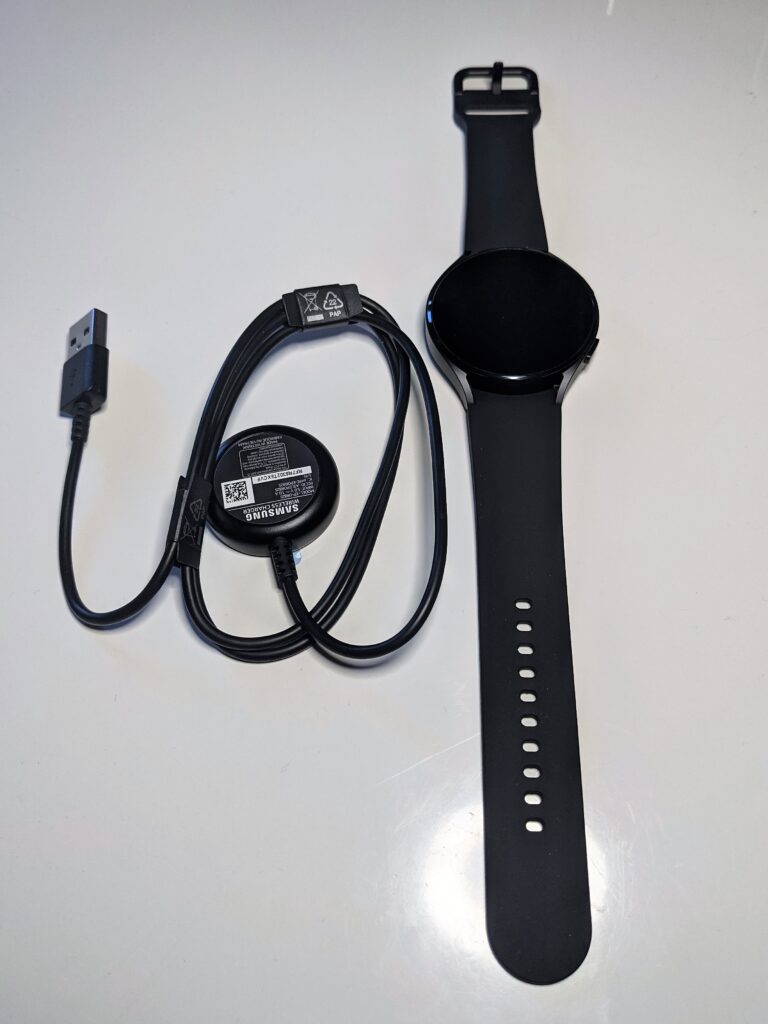 Below is a side-by-side comparison of the Samsung Galaxy Watch 4 44mm and 40mm variants.

As someone with thick wrists who’s still rocking the original Samsung Galaxy Watch, I was impressed that the Samsung engineers have reduced the overall heft and weight of the Galaxy Watch 4. The rubber band in the version Samsung sent me means the Galaxy Watch 4 offers all-round versatility, just as at home on your wrist during a sweaty workout as it is for everyday use or even at night while you’re sleeping.

The only thing I don’t like about the band is the end wraps under the rest of the band rather than the more traditional approach of having a loop to hold it above the band. It takes a little bit of getting used to but it’s still very comfortable to wear whether low on your wrist or higher where its sensor readings are more accurate.

And whether you’re using the Galaxy Watch 4 reactively or proactively, the Circular Super AMOLED display is gorgeous, whether you’re glancing at the time, interacting with apps or reading a notification. 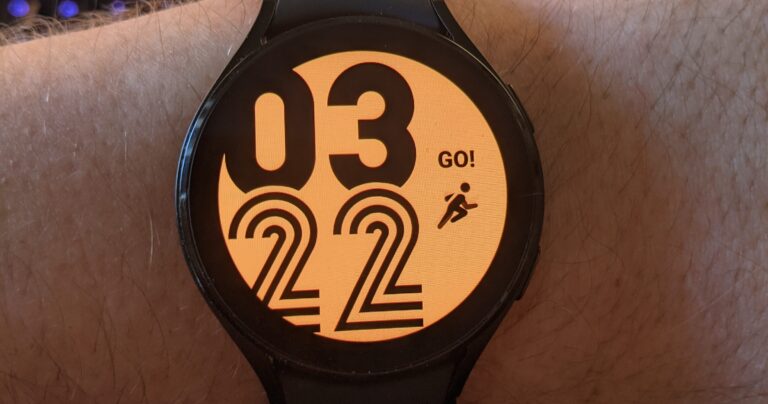 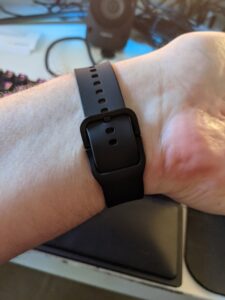 I’ve become accustomed to having to learn the quirks of older smartwatches to get them to respond to gestures. That’s not the case with the Samsung Galaxy Watch 4. Whether you prefer to flick or roll your wrist to see the screen, either action will result in the screen lighting up every time.

Handily, the welcome handholding during the initial (painless) configuration has a great mix of on-screen guidance for the basic gestures that help you resist the urge to constantly touch the screen and leave your dirty fingerprints all over it. When you do need to touch the screen—whether it’s tweaking settings, interacting with apps or clearing notifications—the Galaxy Watch 4 is a speedy performer that keeps up with you. You can even viably respond to text messages from the smartwatch screen, too (install Gboard for even easier watch-screen typing).

The biggest disappointment will likely be shared with anyone who doesn’t use a Samsung smartphone. For those with a Samsung smartphone, there are no feature disclaimers. For those with other Android phones (like my Google Pixel 5), the functionality isn’t as fully featured. I wasn’t able to use any of the deeper health settings, including the blood pressure tracking, because they require Samsung Health Monitor, which can only be installed from the Galaxy Store on a compatible smartphone. I tried my Samsung Galaxy tablet and it wouldn’t even work on that. As someone who has high blood pressure, not having access to this feature is incredibly disappointing.

Earlier I mentioned that the Samsung Galaxy Watch 4 is comfortable enough to sleep with it on. While that’s true, you may not want to because the battery life taps out at about a day and a half. Samsung rates it for around 40 hours with regular use, but I was reaching for the charger late in the morning to top it up after the previous day’s use. That’s particularly disappointing in comparison to the original Galaxy Watch, which I tend to recharge once a week.

In fairness, that’s the difference of a 472mAh battery vs the 361mAh one inside the Galaxy Watch 4, but that should at least translate to a couple of days. Thankfully, you can go from no juice to fully charged in around 90 minutes, while 25 minutes of charging gives you a 25% charge. Without a charging cradle, though, the Galaxy Watch 4 doesn’t as easily double as a bedside clock of a night while it charges, unlike the original Galaxy Watch.

If you own a compatible Samsung handset and the Samsung Galaxy Watch 4 is your first smartwatch, it’s likely you’ll very quickly fall in love. The screen size and overall design are great, and the Galaxy Watch 4 can keep up with even the speediest of multitaskers.

Still, the lack of an included wall charger, a downgrade from the cradle chargers of old, and battery life of around a day and a half hold it back even for Samsung smartphone users. For those seeking to pair the Galaxy Watch 4 with other compatible Android handsets, some of the better health features like blood-pressure monitoring are sadly missing. Apple users need not apply as iPhones aren’t supported (unlike older Galaxy Watches).

Ultimately, this makes the Galaxy Watch 4 more or less recommendable depending on whether you intend on pairing it with a Samsung smartphone.