Sequels are rarely better than the original, but the Huawei Watch Fit 2 is one of the few exceptions. 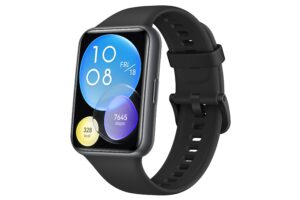 4
See it at Kogan

The Huawei Watch Fit 2 is a seriously impressive fitness smartwatch for under $300, boasting SpO2 monitoring, an inbuilt GPS, Bluetooth calling and tracking for up to 96 different workout types. No, it’s not on par with more expensive rivals from the likes of Apple and Fitbit, but for those on a budget, it’s hard to beat.

Despite a tricky few years thanks to a certain search-engine-slash-tech-conglomerate suspending access to its smartphone services, Huawei is powering on with a renewed focus on wearables. 2020’s O.G. Huawei Watch Fit had a lot of potential, but fell short in a few key areas. Fortunately, the Watch Fit 2 is an improvement in almost every way.

Huawei has a rather expansive and complicated wearables lineup, ranging from entry-level fitness trackers (like the Huawei Band 7) to its flagship smartwatch, the Huawei Watch GT 3 Pro. The Huawei Watch Fit 2 sits comfortably on the more budget-minded side of things, retailing for $299, though you can find it for slightly cheaper. At the time of writing, most online retailers are offering a bonus $50 gift card, though that promotion is set to end on July 17.

At first glance, the Watch Fit 2 doesn’t stray far from the design of the original. Same band, same material, similar weight, and mostly the same shape. It even comes in similar colourways: Black and Sakura Pink, with 2020’s Mint Green switched out for a chic Isle Blue colour. The only noticeable difference in size between the two is that this year, Huawei has opted for a wider case (and thus a larger, higher-resolution 1.74-inch AMOLED display). 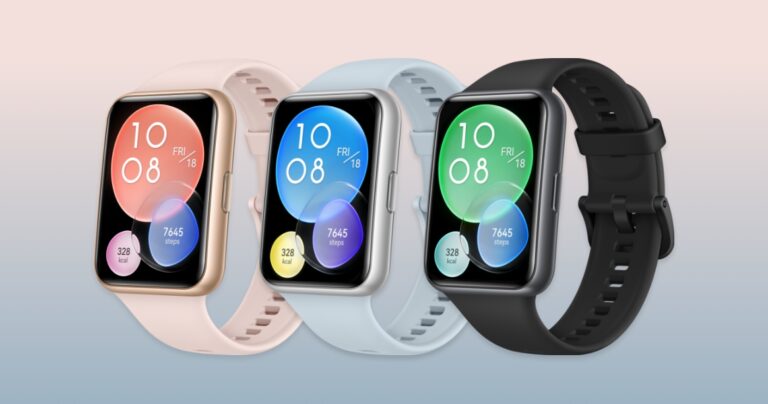 The display itself is bright, vibrant, smooth, and responsive – more so, I found, than the original Watch Fit, which could be a little jittery at times.

Unfortunately, like its earlier edition, the Watch Fit 2 uses proprietary watch band connectors, meaning getting your hands on spares is a little trickier than ordering a standard 20mm band off Amazon. Additionally, only one size wristband comes in the box, unlike other brands which often provide a small and a large option. It’s not a huge issue, but it left quite a bit of excess when tightened to the right size on my wrist.

Thanks to its polymer casing, the Watch Fit 2 isn’t the most premium-feeling device in the world, but it’s comfortable and unobtrusive, making for what is, overall, a good-looking watch. 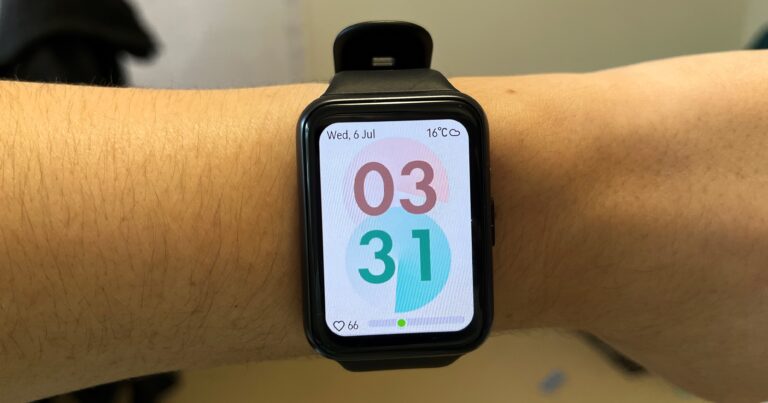 The Huawei Watch Fit 2 is, as the name suggests, a fitness tracker first and a smartwatch second. It’s clear from the kinds of health features on offer that Huawei is going for a more holistic approach to fitness tracking.

There’s the usual step count, heart rate monitoring and workout tracking, plus SpO2 (blood oxygen) measurement, onscreen workout animations, sleep tracking, and an inbuilt GPS to map your runs. But delve into the Huawei Health app and there’s a myriad of wellness metrics that track everything from how much water you’ve drunk to whether you’ve done your daily breathing exercises. I’m not the kind of person who wants that much data about myself, so the options were a little overwhelming, but for those looking to gain a more detailed picture of their health, I can see it being useful.

My biggest gripe with the Watch Fit 2 is that, like its predecessor, it seems to only count steps if the arm wearing the watch is swinging while you walk, thus significantly undercounting steps and calories burned. To put that into context, I walk my dog every day for about half an hour, and the arm wearing the watch is usually the one holding the lead. According to my Apple Watch, I take around 4,000 steps during that walk. My Fitbit Versa 2 gave a similar result. The Huawei Watch Fit 2, however, clocked a little under 3,000 steps. That’s a pretty significant difference.

In terms of more typical smartwatch features, I was pleased to see that Huawei introduced Bluetooth calling and quick replies (the latter for Android only) in the Watch Fit 2. Its omission in the original Watch Fit was a major downside for me, so I was keen to give it a go. In my testing, however, the call quality proved a bit iffy for the person on the other end of the phone (or shall we say watch) – multiple people complained that I sounded muffled or said they could hear a scraping sound even when I sat completely still. Not ideal, but I’d still rather imperfect Bluetooth calling in a pinch than none at all. The Watch Fit 2 also supports music playback, but only for Android users.

Unfortunately, like the original Watch Fit, the Watch Fit 2 isn’t NFC-enabled, so you can’t make card payments using your watch like you would with an Apple Watch or Fitbit Versa or Sense.

One thing Huawei always gets right in its wearables is battery life. The Watch Fit 2 is advertised as lasting up to 10 days with standard usage and 7 days with heavy usage, which was pretty accurate based on my experience.

When you do finally run out of battery, recharging is a speedy affair, with a five-minute juice providing enough charge for a full day and about an hour to bring it back up to 100%.

Sure, the Huawei Watch Fit 2 isn’t going to give the Apple Watch a run for its money any time soon, but considering it’s about half the price, it punches well above its weight. It also offers some welcome improvements from the original 2020 model, and though it won’t replace your phone completely, it’s a worthy sidekick on your health and wellness journey.