How does Huawei’s newest smartwatch stack up? 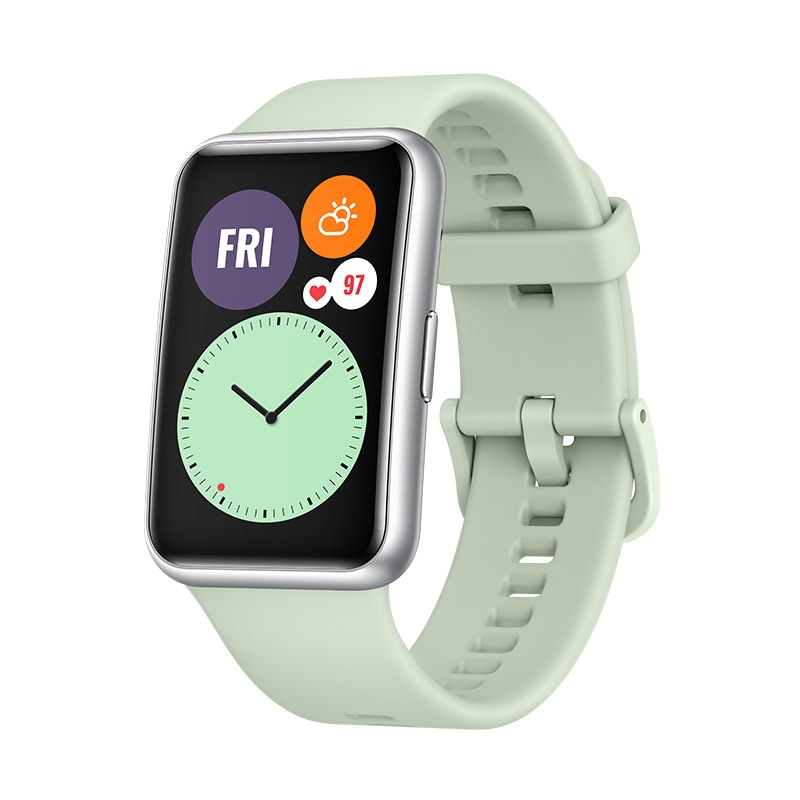 The Huawei Watch Fit is pretty light on smartwatch features, but with an SpO2 sensor, stress monitoring, sleep tracking and myriad of exercise modes, it’s an extremely feature-packed health tracker for its sub-$250 price, and a single charge will last you a whole week (if not more).

Huawei has had a rough go of it the last few years, and while their smartphones are still in a bit of a grey area thanks to the ongoing trade beef with the US, the Chinese tech giant is still pumping out some great products, and the Huawei Watch Fit is no exception. Coming in at less than $250, this somewhat unusually-designed watch punches well above its paygrade, with tons of health-tracking features, however, as I found out, there are still some shortcomings.

There’s no debating it - the Huawei Watch Fit is one of the best budget smartwatches you can get. At an RRP of $249, the Watch Fit sits on the lower end of the entry-level smartwatch/fitness tracker pricing spectrum, falling between $50 and $100 less than the Garmin Forerunner 245 Music, Fitbit Versa 2 and Apple Watch 3 and offering some health features that the big three don't have, like an SpO2 sensor, inbuilt GPS and more.

If you're wanting to save even more, most retailers (including Huawei’s own online store) are slinging it for $199 or even less, making it an even more tempting proposition.

Most smartwatches I’ve had the pleasure of testing tend to look rather similar to one another. The Apple Watch 6, Fitbit Versa 3 and Oppo Watch all had the same rounded-square sort of design. I like that, with the Watch Fit, Huawei went down a different route.

The AMOLED display measures an impressive 1.64 inches in size, and shock horror, it’s not a square. Instead, Huawei has opted for a looooong, stretched-looking display, one which just managed to span the width of my (admittedly small) wrists. The screen is big, bright and beautiful, however, I did find it to be a little more jittery when scrolling compared to the likes of Fitbit and Apple’s offerings, which I would assume to be due to a lower screen refresh rate. 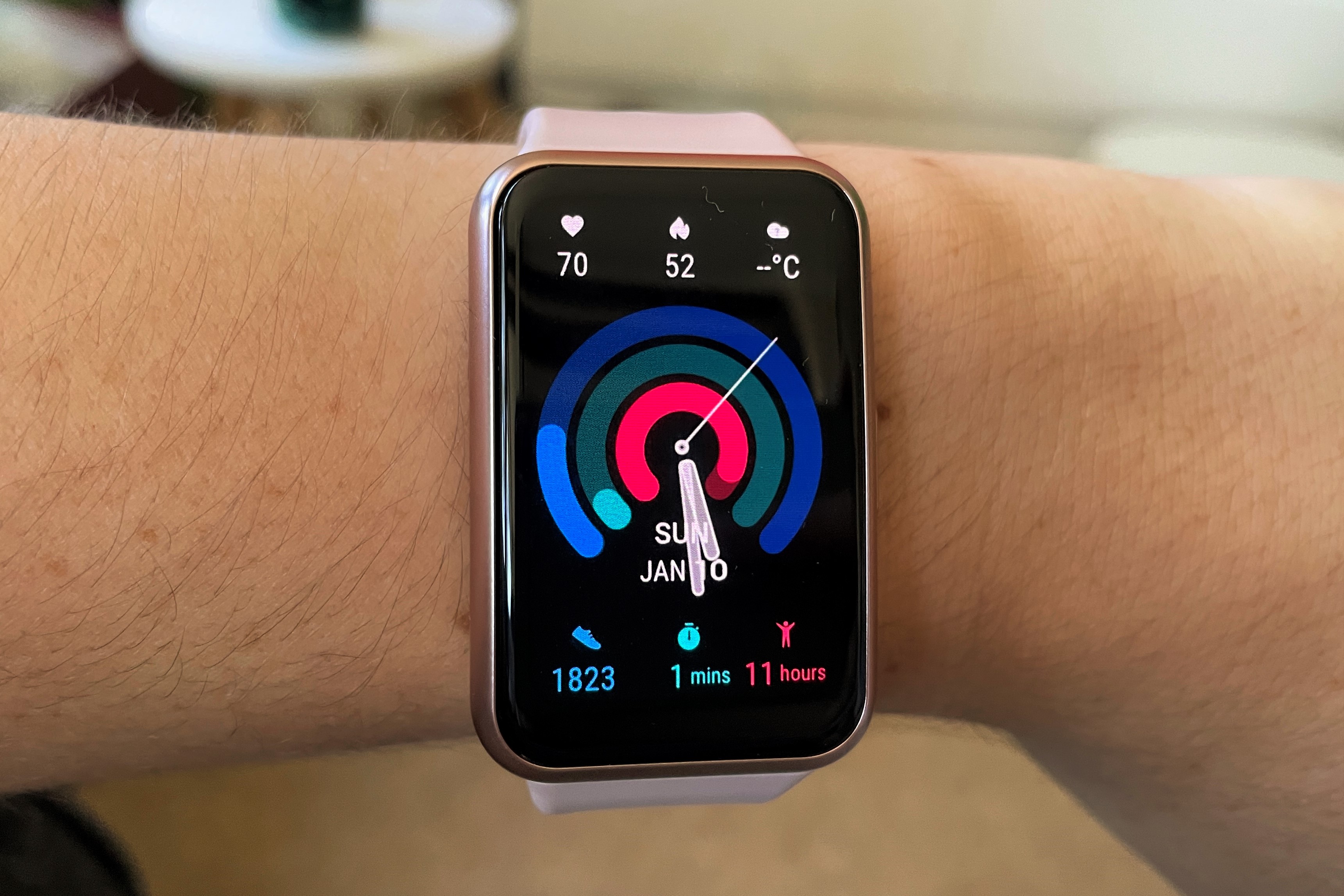 One big difference between the Watch Fit and other devices in its price range is material. While most watches in the sub-$300 bracket sport an aluminium case, Huawei has kept costs low by using a plastic case that simply looks like metal. It’s perfectly fine to look at and comfortable to wear, but of course doesn’t feel quite as premium as others on the market.

I tested the Sakura Pink model, which claims to cover wrists between 11 and 19 cm. If you want a little more room to work with, you’ll have to go with the Mint Green or Graphite Black variant, which caters for wrists between 13 and 21cm. The silicone watch strap is removable on all three models, however, Huawei doesn’t offer any other bands, so you’re pretty much stuck with the one you get, unless you can find a third-party manufacturer.

The Huawei Watch Fit runs on its own proprietary operating system, and with no app store to speak of, you’re pretty limited when it comes to smartphone connectivity. You can’t control your music, reply to texts, check your emails or install any third-party workout apps. Plus, since there’s no NFC, you can’t pay using your watch, and no speaker or microphone means you can’t answer calls, either. These are big downsides, there’s no denying it, but if you’re not interested in bells and whistles, you’ll be happy with Huawei’s streamlined approach.

Why? Well, lack of smartwatch-y features aside, the Watch Fit is above all a health and fitness tracker - and a good one at that. It tracks the usual suspects, like steps, minutes of activity, heart rate and sleep, but there are a few extra features that are rather surprising given the watch’s low cost. First, there’s the inbuilt GPS to track your walks, runs, rides and swims (it’s 50m water resistant) without needing to be near your phone. Next, there’s the increasingly popular SpO2 sensor, which tracks blood oxygen saturation, and finally, the Watch Fit even measures your stress levels and suggests breathing exercises to help you relax.

Comparing the data tracked by Huawei to similar data on my Apple Watch and Fitbit, I would have to say it appears to be the least accurate of the three, underestimating steps and calorie burn and overestimating sleep. Even so, it’s accurate enough to get a general idea of your health and fitness, and there’s just no beating the Watch Fit’s ridiculous 96 workout modes.

I've often lamented that smartwatch manufacturers need to focus more on improving battery life, so my interest was well and truly piqued when I saw Huawei advertising the Watch Fit battery life at up to 10 days of regular use. In practice, I found it to be closer to about seven. Iffy estimates notwithstanding, a week is pretty damn good, and it charges super quickly as well - in fact, you can get a solid day of use from a five-minute juice. Not bad at all.

Yes, if you’re on a budget.

The Huawei Watch Fit isn’t the best smartwatch on the market, but it isn’t trying to be. It’s a budget-friendly, feature-packed and attractive health and fitness tracker that’ll keep you motivated all week on a single charge. Is it going to replace your phone, or at least share some of the load? No, but it just might make you a whole lot healthier and fitter.