Aussie Broadband combines some of the best NBN speeds and NBN plan prices to take our pick for best value NBN provider.

How good is Aussie Broadband?

Aussie Broadband is a fairly new provider in the Australian NBN space. Its speeds are great compared to equivalently priced rivals, while it is one of the only providers to actually publish how much NBN bandwidth it has.

Prices start at $69 a month for unlimited data at speeds that should be enough for someone who just does some basic HD Netflix streaming, while it’s only a $20 jump for its max speed 100Mbps plan.

We like it too, and think it’s the best value NBN provider you can get if you want fast speeds. If you’re still not sold on NBN,  read more in our guide to whether NBN is actually faster than ADSL2+ and 4G.

Which Aussie Broadband plan is best?

Aussie Broadband has NBN plans aimed at light users as well as heavy downloaders and gamers.

If you’re just looking to get a basic NBN internet connection for mostly checking emails, browsing the web and the occasional YouTube or Netflix video, then Aussie Broadband’s NBN 25/5 plans starting at $60/month for 100GB data might be perfect for your needs.

While its speeds are basic, they’re still a decent upgrade from ADSL2+ if that’s what you’re currently on, and is probably more than enough for your daily tasks. All Aussie Broadband plans now have no setup fees and are month-to-month.

All its plans are also BYO modem, however if you really need one, you can get a modem or router via Aussie Broadband for an additional $149 + delivery.

If you watch a bit more Netflix or download a few things extra each month, then 100GB of data is probably not going to be enough for you, especially if you’re streaming in HD.

If you only have one TV and a couple of phones or tablets in the house and don’t require massive amounts of data at a time, then the 25Mbps NBN plans are still probably all you need with additional data. You can move to a 500GB plan for an extra $9/month, but our recommendation would be the unlimited data plan which is only $4 more and totals at $69 per month.

Check out our roundup of the best high-speed internet plans for streaming for more options.

Once you start to add a few more people along with additional TVs and devices to your household, you might need to consider a higher speed tier. If you have more than one TV, enjoy 4K content or have a few phones being used at once, you’ll want to start looking at NBN 50Mbps plans.

Aussie Broadband’s 50Mbps plans are some of the best according to the ACCC, averaging over 43MBps during peak periods at night. This means that when it’s 8pm and the whole street wants to watch Netflix, you can do so without it lagging or buggering. It’s one of the reasons Aussie Broadband’s NBN 50/20 plans get hundreds of positive Aussie Broadband review scores.

For this plan tier, you’re looking at $70/month for 100GB, which goes up to $79/month for unlimited data. Like Aussie Broadband’s other NBN plans, they’re month-to-month and don’t have set-up fees.

When the NBN first went online, many providers were offering speeds without having enough capacity for users to actually achieve those speeds. This forced the ACCC to step in and has since forced NBN providers to advertise their average peak NBN speeds. This is essentially the speeds their customers average at night when the connection is used the most.

Aussie Broadband is one of the leaders in this field. It’s usually in the top three to four for providers in terms of average speeds according to the ACCC’s broadband performance data at all plan levels. In its February 2020 update, Aussie Broadband scored fourth for download and upload speeds during busy hours and third for download speeds in the busiest hour. It’s also one of the only providers that publicly shows how much CVC capacity it has for its customers, which is a good reflection of the speed you’ll actually receive on your connection.

What is NBN CVC?

CVC stands for Connectivity Virtual Circuit and is what internet providers buy from NBN to sell and provide you with a connection. Think of CVC like lanes on the NBN highway, with the NBN having many highways across the country that you need to buy these CVC “lanes” on. Essentially, just as a highway with more lanes for cars means more cars can get through, an NBN provider with more CVC means more data traffic gets through. You can see how much CVC and how close to capacity it is for Aussie Broadband here.

It’s all well and good to have a fast NBN connection with lots of data. But if things go wrong, you want to know that your problem can be solved. Luckily if you’re looking at Aussie Broadband review scores, you’ll see most people rave about the support from Aussie Broadband and its Australian-based support team.

How to sign up and connect to Aussie Broadband

Signing up for Aussie Broadband is fairly simple once you’ve worked out what plan is right for you and can be done online in minutes.

Once you’ve signed up online, it could either take hours or weeks until you’re online depending on whether or not you have an existing NBN connection. If you’ve already got an NBN connection with another provider, you could be switched over to Aussie Broadband before you go to sleep that night.

However, if you’ve never had an NBN connection at your premises before, NBN will need to send out a technician to your home to get you connected. This could be in a few days or a few weeks depending on availability.

If you do need a technician, you’ll need to be home for them to install the NBN hardware for you. This usually takes less than one hour to do.

Aussie Broadband has partnered with Fetch TV to offer its boxes as part of Aussie Broadband NBN plans. If you don’t have a smart TV or an existing set-top box, this could be a great addition to your plan.

Fetch TV comes in two options: Fetch Mini and Fetch Mighty. Fetch Mini provides basic smart TV options such as Netflix, Stan, YouTube and free-to-air catch-up apps, as well as pause and rewinding of live TV. This costs an extra $10 a month on your plan.

Fetch Mighty adds to this 4K streaming and the ability to record and save up to 1TB of live TV for an extra $15 a month on your plan.

Fetch also has a bunch of different channel packs you can add, starting at $6 for individual packs or $20 a month for all four popular packs. These include channels such as Nickelodeon, National Geographic, BBC Knowledge and ESPN. Find out more with our review of the best TV and internet bundles available in Australia.

What modem does Aussie Broadband use?

Aussie Broadband offers a Netcomm NF18ACV modem to its NBN customers. All of its plans are BYO modem, however if you want to buy a new modem off them, it’ll cost you $149 plus $15 for standard delivery or $20 for express. This includes 4x Ethernet ports and dual-band AC WiFi for fast wireless browsing across the house. 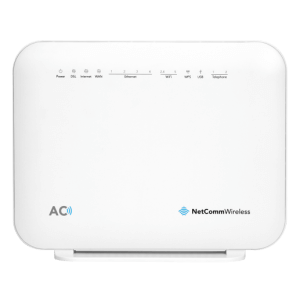 This exact modem though you can find a little cheaper through other online retailers, with the cheapest we’ve seen at about $130.

It’s also worth shopping around for other modem router brands if you know what you’re looking for. For around the same price, you can pick up a modem router like D-Link’s DIR-879 for example which will offer you better range in your house and better speeds across all your devices.

We’ve got plenty more reviews on Australian NBN providers. When it comes to first-class value, we recommend reading up on Exetel. If you’ve got a need for speed, check out our Superloop NBN review. If you’re one of the unlucky few who still can’t connect to the NBN, there are plenty of quality alternatives on the market. Not sure how fast your download speeds are? Find out how to test your NBN internet speed with our tool.