Disney+ has quickly become one of the most popular streaming services in Australia but is worth staying subscribed to in 2022?

Disney+ has worked out the kinks since launch and added a healthy lineup of quality original series and fast-tracked theatrical releases to the service.

The worst you could say about Disney+ so far is that it's price is a little too high and that the quality of its Originals isn't consistent (but that's true of most streaming services).

Disney has brought a budget to the small screen that would make Scrooge McDuck blush; evidenced by the high-quality originals we’ve watched so far, such as The Mandalorian, Wandavision and Obi-Wan Kenobi.

Then there are the Disney classics: Beauty and the Beast, Aladdin and The Lion King all come to mind but more recent Pixar fare such as Frozen 2 and Onwardare an on-demand godsend for parents across the world.

Disney's high-profile acquisition of 20th Century Fox also means you can find some 90s animation gold, such as The Simpsons and the animated X-Men series. Not to mention more mature content (like Arrested Development and Grey's Anatomy) via Disney+ Star.

The Disney+ app has also improved significantly since its launch, so we've decided to re-evaluate the app's worth in an increasingly competitive market.

All pricing and deal information on this page is accurate at the date of publish (May 23, 2021)

Disney+ initially launched at $8.99 per month but with the introduction of Disney+ Star, the monthly price has gone up to $11.99 per month. That change took Disney+ from being cheaper than most of the competition, to more expensive (at the cheapest entry point).

Here’s how Disney+'s pricing compares with other Australian streaming services:

How does Disney+ compare?

Disney Plus vs Netflix, Stan and more
View Plans

There are benefits to subscribing for an entire year. In the case of Disney+, you'll save roughly $23.90 if you sign up for a year (rather than paying every month). It also temporarily safeguards you against sudden price increases.  Disney+ has been around long enough now that we can say with a good deal of confidence that if you like it so far, you'll still be enjoying it a year down the track. That said, it's not a guarantee and there aren't any options to get a refund if you find you're not using the service as much as you used to.

We've enjoyed the originals Disney+ has released so far but they're few and far between and the quality can be hit and miss. Still, if you've got those Disney classics on repeat, signing up for a year is a good way to save a bit of dough. 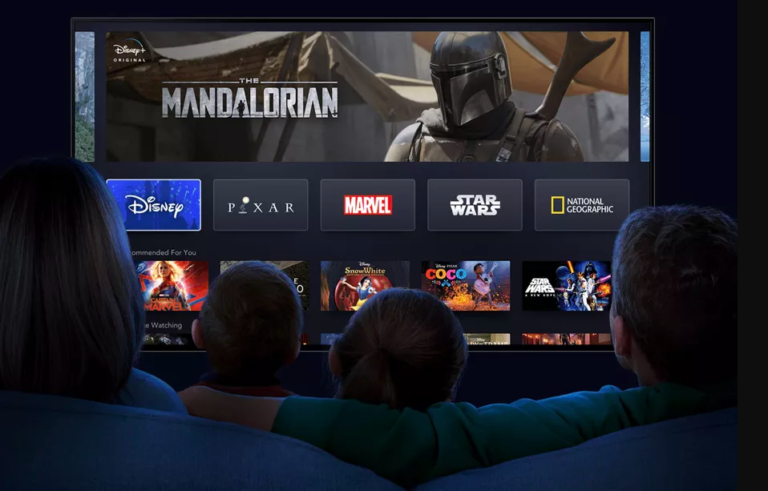 Navigating the Disney+ app is intuitive on every device we've tested. Disney realises that while the Venn diagram of Marvel, Star Wars, The Simpsons and Disney classics fans overlap occasionally, there are still many users who are here for one thing and one thing only. When you first launch the website or app, you'll see buttons for each of those categories front and centre, in addition to Star, the new hub for more mature content Disney acquired when it bought Fox. Scroll down further and you'll find carousels of the same categories you'd see on any other streaming service (e.g. 'Because you watched' and genre recommendations). At launch, Disney+ was missing a Continue Watching feature, but that's since been added and is given prominence on the landing page.

There are some fantastic navigational options you don't get on most services. A-Z movies and series lists, lists of 4K/UHD content. That sort of thing. The A-Z list has come in handy a few times because the Disney Plus search function just isn't very advanced.

Take the Hulu original Marvel's M.O.D.O.K for example. If you just search 'modok,' the search won't recognise the title without the periods between each letter. Instead, you're served the 1993 Iron Man animated series.

Disney+ is touting a robust set of accessibility features, such as descriptive audio, closed captioning, and audio navigation.

The descriptive audio is the star of the show here. It's clear, concise and does a bang-up job of describing every scene for the titles we've managed to test it on. However, the audio navigation could use a little work. Subtitle options and closed captioning customisation have also improved across devices at launch, allowing you to select the language of the audio and subtitles, and tweak the font (size, colour, background) to whatever reads best.

What happened to the Disney+ free trial?

At launch, Disney+ offered a 7-day free trial promotion but in the lead-up to its exclusive Hamilton movie, the offer was removed. New subscribers are now billed the $11.99 subscription from the moment they sign up. This move echoed Netflix's decision to remove its free trial just a few months before.

Over the last couple of years, Disney has been slowly herding all of its franchises and properties back into its own stable, buying back distribution rights across the world to launch Disney+ with all the usual suspects.

At launch, it was slim pickings for anything with a more mature slant. Outside of its Marvel/Star Wars TV movies and TV shows (and a few documentaries courtesy of National Geographic), the line-up was mostly aimed at children. The original Marvel and Star Wars shows that released in the months following helped that somewhat but Disney dialled things up when it introduced Star, a new hub for all the seriously adult series and movies that the company gained in its acquisition of Fox (Deadpool, Logan, Alien etc.).

As of June 2022, there are 648 TV shows available to stream on Disney+ (up from 450 in 2021), including what's offered on Star. Some of the most popular TV shows available include Grey's Anatomy, This is Us, Orville, Obi-Wan Kenobi, Pistol and Under the Banner of Heaven and more.

You can find every TV show that was added with Disney+ Star in our guide but we’ve also picked out some of the best TV shows available to stream on the service in Australia, including Gargoyles, Lizzie McGuire, Star Wars: Rebels and The Mandalorian just to name a few.

Movies on Disney+ in Australia

Star sweetens the cinematic deal with classics like Die Hard, Alien and more

Disney wasted no time corralling its cinematic gold from potential rivals before it first launched so the general rule of thumb is that if it's under Disney's thumb, you'll find it streaming on Disney+. You'll find every major MCU (Marvel Cinematic Universe) except for Hulk and Spider-Man available as well as every Star Wars flick, and most things produced by Fox (Die Hard, Predators, Alien... the list goes on).

There aren’t as many original Disney+ movies in production as there are TV shows, but there are a small handful of original movies such as the Chip 'N Dale Rescue Rangers, that really hit.

We've dug through the entire list of movies available and have put together a solid binge list of the very best movies on Disney+ .

When did Disney+ launch in Australia?

Disney+ launched on the 19th of  November 2019 in Australia and New Zealand, only one week after the service debuted in the U.S., Canada and the Netherlands on the 12th of November 2019.

It’s quite rare for Australia and New Zealand to get early access to these global entertainment services (or movies and television in general) so while the week wait felt like an eternity for Star Wars fans looking to avoid The Mandalorian spoilers, we still had it better than many other countries, such as the UK, Germany, France and Italy, who had to wait until the 31st of March 2020.

On the 23rd of February 2021, the company launched Disney+ Star, a new add-on to the service that introduced an additional 447 movies and 155 TV shows.

What devices can I watch Disney+ on?

Disney+ is available on just about every major streaming device except Australian set-top boxes (Fetch and Foxtel iQ).

If you’re looking to watch Disney+, there’s a healthy line-up of compatible streaming devices available (see our recommendations here). There are the usual mobile and tablet suspects (iPhone and Android), then there are set-top boxes such as Apple TV, streaming media devices like Chromecast and Fire TV Stick, gaming consoles (PlayStation and Xbox) and Samsung, LG, Sony and TCL Smart TVs.

If you don’t have a compatible device, you can always stream Disney+ via your web browser on PC or Mac.

Here are the questions people are asking about Disney+ in Australia.

Unlike the Netflix Australia launch, which saw a fraction of the library migrated to our shores, the Australian Disney+ library actually has more TV shows and movies in Australia than it does in the US.

Yes. Disney+ allows subscribers to download TV shows and movies for offline viewing. In our time with the app, we haven't noticed any restrictions on content that's available for download (as is the case for Netflix and Stan).

Your data cap will also be thanking Disney because not only can you download TV shows and movies on your home WiFi network, you can also select Standard, Medium or High for the download file size and quality. So if you're running low on data, you can opt for the lower quality download.

It sure does. Unlike most streaming services, Disney+ offers support for 4K/UHD resolution, HDR10 and Dolby Vision on its standard subscription tier. Disney Plus also doesn't make you go searching for it; it has a dedicated category for 4K/UHD/HDR titles that's accessible directly from the navigation menu.

All you need is a subscription and an eligible 4K television (here are our picks for the best 4K TVs available).

Yes. Not only does Disney+ offer typical closed captioning and subtitles but it will also offer descriptive audio support and audio navigation assistance as an option for users. That’s a decent range of accessibility features straight out of the box.

Disney hasn't disclosed any particular details about the service's expected data usage but we've run a few tests streaming in HD and data saver mode to get an idea of how much data Disney Plus uses. On average, we found that the Disney Plus app used 2.2GB per hour for HD streaming and 1.5GB per hour using the app's data saving mode. If those figures are giving you excess data shell-shock, we might suggest upgrading to an unlimited broadband plan.