There’s a lot going on beneath the surface of the lid of the Microsoft Surface Laptop 4.

As someone who writes for a living, the Surface Laptop 4 ticks all the right boxes. The screen is gorgeous, default brightness is just right, the keyboard is an easy transition from a full-sized alternative, and the touchpad is helpful in a way that so many others are not. Despite being somewhat hefty, this is a laptop you can comfortably plonk on your lap for work, browsing, video bingeing or even gaming.

There are a few quirks – most notably the lack of ports – but none of the minor detractors are enough to hold back the Surface Laptop 4 from being a serious contender for your next laptop purchase. 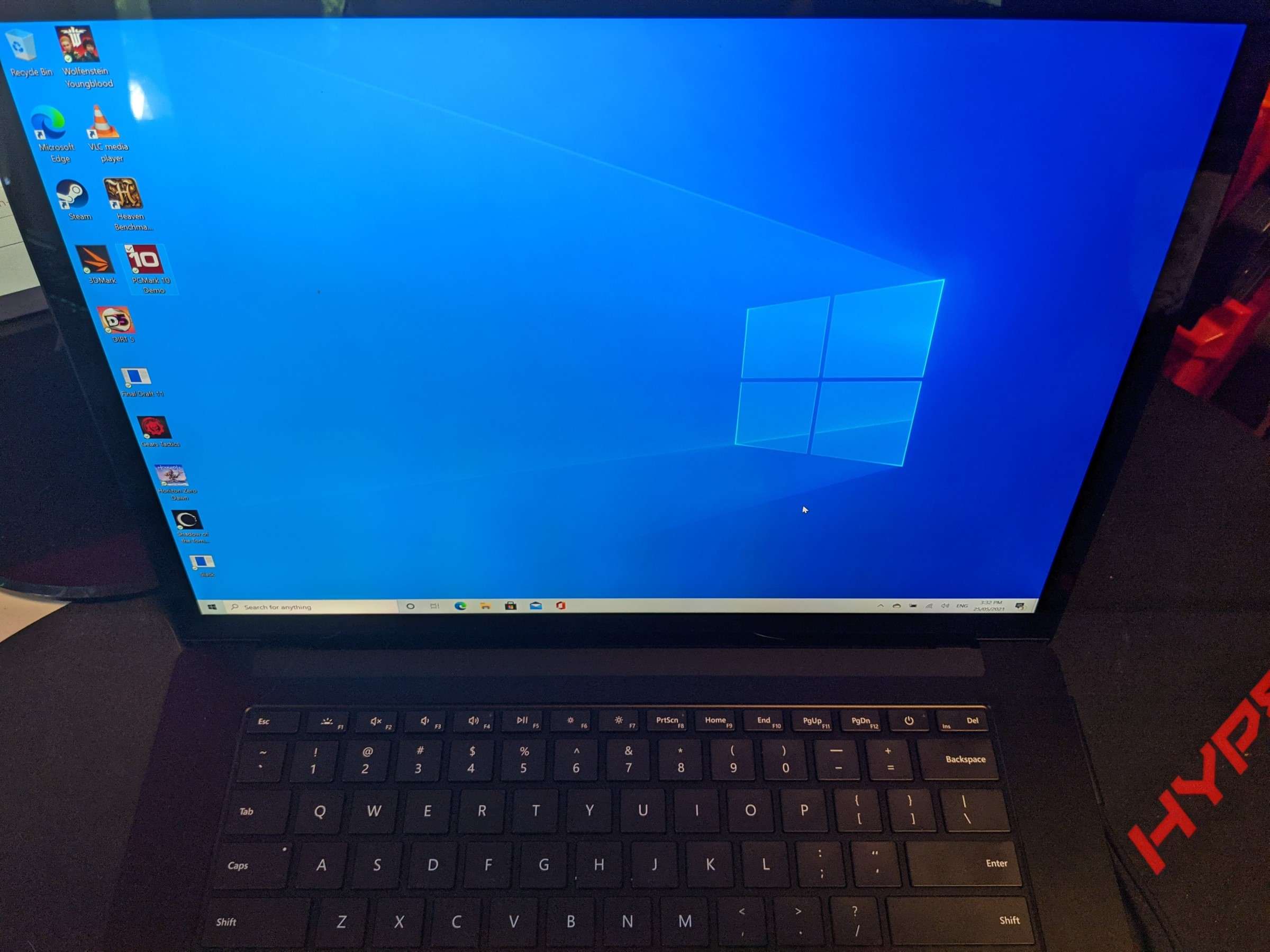 How much does the Microsoft Surface Laptop 4 cost in Australia?

It has to be said that Microsoft sure knows how to pack a box so the premium experience starts right from when you remove the plastic. Inside the box you’ll find the Surface Laptop 4 as well as the power brick and a separate power cable, which feels a smidge shorter than other laptops I’ve used and reviewed.

The screen size of the Microsoft Surface Laptop 4 determines the overall material and feel. Opting for the 13.5-inch screen lets you choose between softer Alcantara or metal, whereas the 15-inch model only comes in metal. After using and reviewing laptops with plastic bases, I was immediately drawn to the aluminium case even if it adds to the overall heft and shows how grubby my fingers are (mostly on the bottom of the Surface Laptop 4, though).

Maybe the metal plays a role in this, but lifting the lid isn’t as easy as I’m used to from my faithful XPS 13 or the Asus TUF Dash F15 I recently reviewed. You really need two hands to crack the lid. Once opened, there’s a quiet and responsive keyboard with an appropriately sized touchpad beneath it which, mercifully, doesn’t actually suck. I usually reach for an external mouse to make laptop use less painful, but the Surface Laptop 4 touchpad doesn’t have the usual sporadically responsive quirks of competitors. My only gripe with the keyboard is there’s no dedicated Function-key shortcut to disable the touchpad, and it still weirds me out that you have to activate the Function key to use the typical top-row keyboard F-keys. 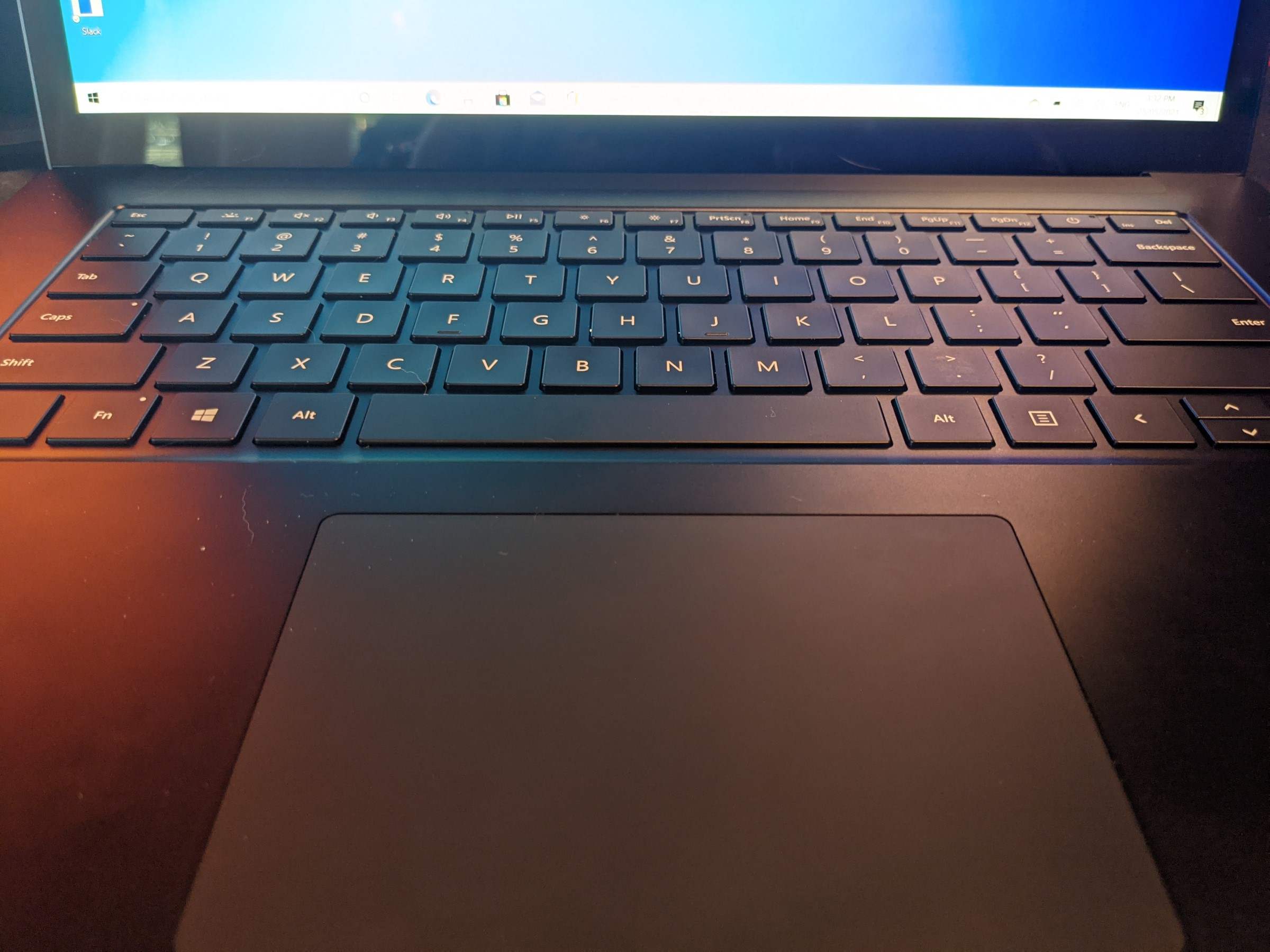 To keep the bottom portion of the laptop a strictly keyboard/touchpad affair, Microsoft continues its Surface trend of a dedicated power button on the keyboard. While this keep things neat, you do run the risk of erroneously killing the screen if you use the delete key a lot, which is just to the right of the power button. Thankfully, errant taps only turn off the screen, and if you’ve configured facial recognition (via the webcam), you’ll be back to where you left off before you can unleash too many swear words.

The main issue is the obscene lack of ports, which means you’re effectively forced to buy a dock and/or use Bluetooth peripherals. All of the ports are located on the left, too, which is great for southpaws but less great for righties looking to use a wired mouse. Plus, there’s only one USB-A port alongside a USB-C port.

The Microsoft Surface Laptop 4 comes in a variety of specs configurations, starting with the choice of either 13.5-inch or 15-inch display, followed by whether you prefer an Intel or AMD processor. These choices can be enhanced for more dollars with linked bigger hard drive capacities (256GB, 512GB and 1TB) and total memory (8GB, 16GB or 32GB RAM).

The specs table below is reflective of the review model Microsoft sent me, which was a 15-inch Ryzen 7 Surface Laptop 4 with 16GB of RAM and 512GB storage. 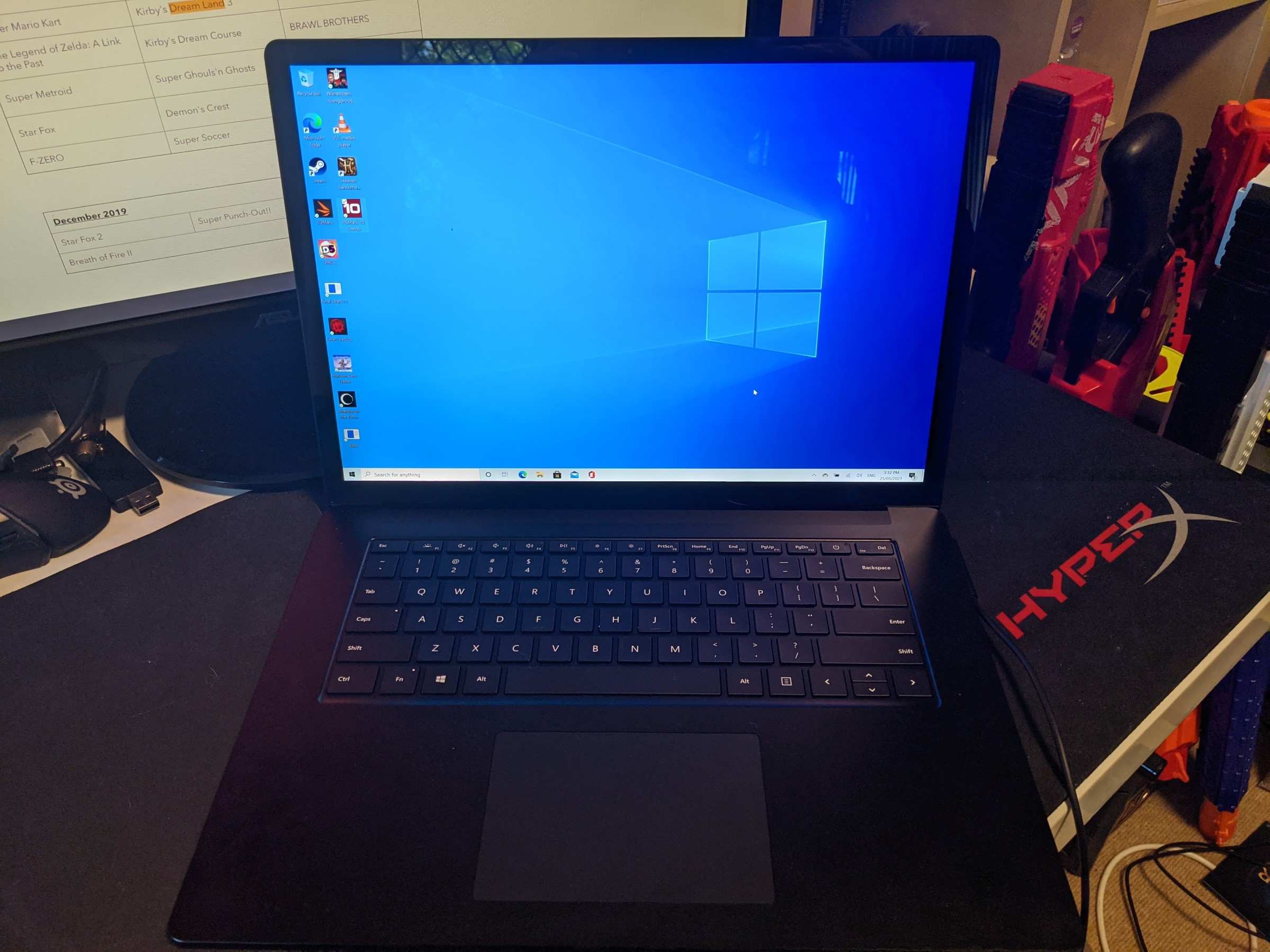 There’s plenty of power beneath the hood of the Microsoft Surface Laptop 4, even if I did struggle to awkwardly connect the power cable one-handed. For those keen on productivity, the Surface Laptop 4 has you covered. It goes from powered off to logged in and ready to use in under 15 seconds, which includes the half second it takes for the camera to log you in if you have facial recognition activated.

Thankfully, that facial recognition was robust enough to detect that other faces were different to mine and default to other login methods as required. While it’s quick to log you in, it’s a shame the webcam is limited to 720p, which is a noticeable quality drop compared to the gorgeous 2496x1664 PixelSense Display and the surprisingly crisp audio from the speakers.

As a lifelong Intel devotee, I was particularly impressed with the AMD Ryzen 7 processor and integrated graphics combo. The Surface Laptop 4 keeps up with everyday tasks, multitasking effortlessly between the expected use cases. Even when I pushed it to make some noise with some gaming, the fan didn’t get close to anything distracting in volume, which meant it was easy to play on lower volumes without having to up the audio to drown out the fans.

In fairness, gaming ups the heat on the Surface Laptop 4 noticeably, but while it was enough to warm my lap, it never got to uncomfortable stages and I couldn’t feel the heat through the keyboard. It helps that the vents sit on the back of the laptop beneath the screen so you don’t have to deal with hot exhaust air either. It’s refreshing to comfortably use a laptop on my lap again.

Battery life and charging times are particularly impressive, too. I got just shy of eight hours out of a 4K video test and around 11.5 hours with a looping YouTube video test, both with the recommended battery setting. Had I lowered it to battery saver, the results would have been even better, but these tests are in line with what I expected for the 17.5-hour typical-usage claims for the 15-inch Ryzen model. Charging from 0% to 100% took under 90 minutes with the screen on, so expect even faster times if you’re charging with the Surface Laptop 4 switched off. 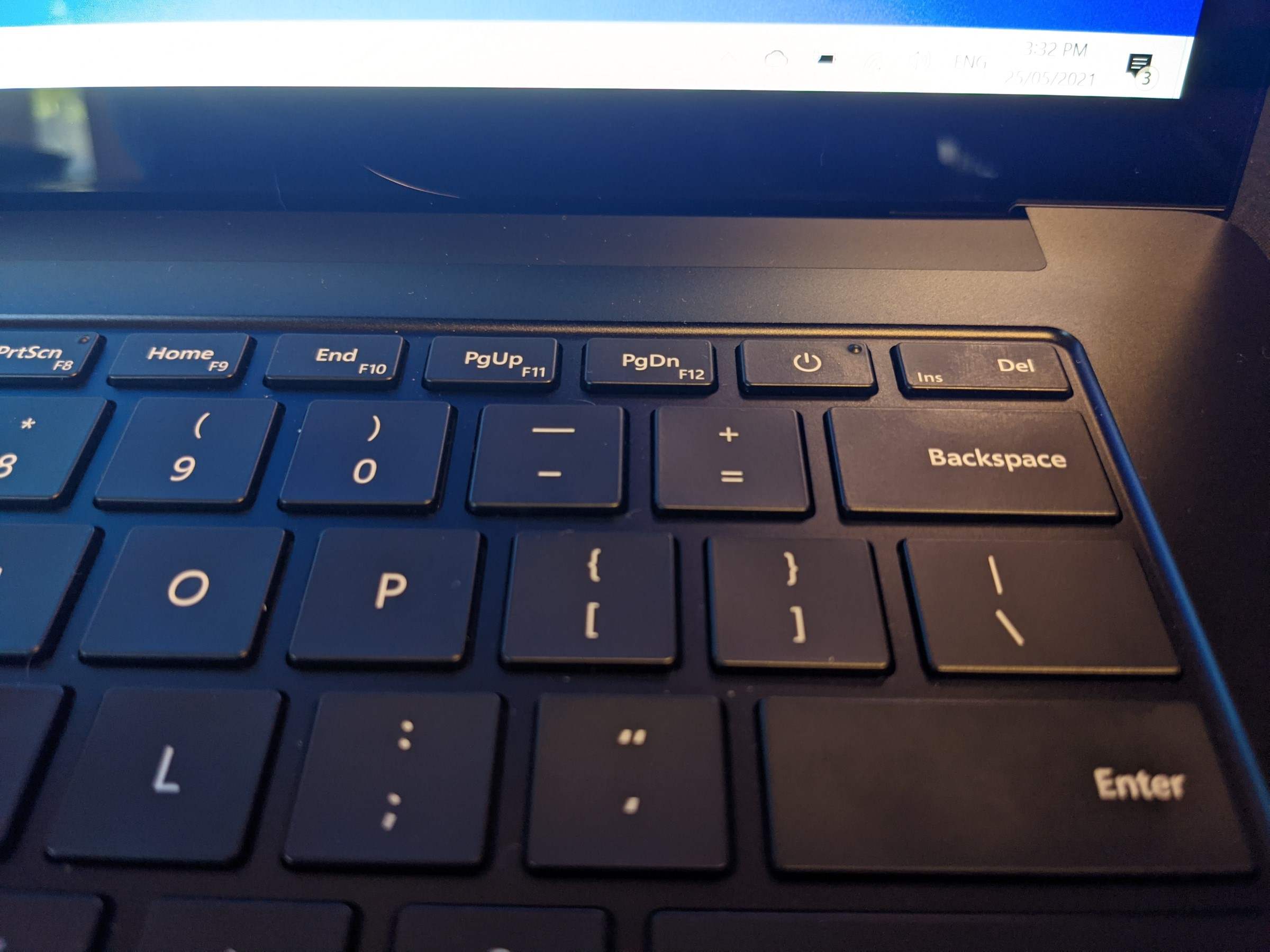 Is the Microsoft Surface Laptop 4 worth it?

The Microsoft Surface Laptop 4 is absolutely worth it, and the fact it’s available in 13.5-inch and 15-inch configurations, with Intel and AMD options to please purists, means you can pair screen size and processor preferences with your budget. There are a handful of gripes that hold back the Surface Laptop 4 from being a five-star success story, but they’re not enough to hold it back from being wholly recommendable.

To put it all into context, I’m due for a laptop upgrade, and while I’ve been saving for the latest version of the XPS 13, along comes the Surface Laptop 4 to make me reconsider my Dell allegiance.