The ASUS Vivobook Pro 16X OLED hits your wallet hard, but delivers big benefits for those who need a performance-oriented laptop with a larger screen. 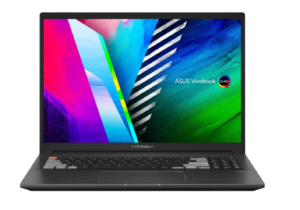 The ASUS Vivobook Pro 16X demands a premium when it comes to price, but delivers tangible benefits for those who need a performance-oriented laptop with screen that's both bigger and better.

While overall specs and design here doesn’t deviate too much from what you’ll find in the rest of this year’s Vivobook Pro lineup, those who can afford to spend a little more may find that those few extra inches of screen add a lot where it counts. 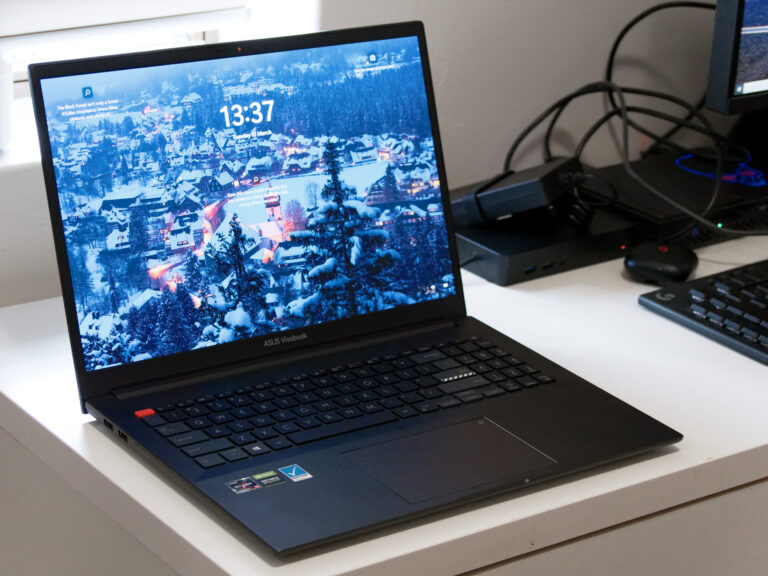 The ASUS Vivobook Pro 16X OLED comes with the same bare-bones accoutrements as other modern laptops. The packaging itself is fairly generic, but includes both the laptop and a 120W AC adapter. 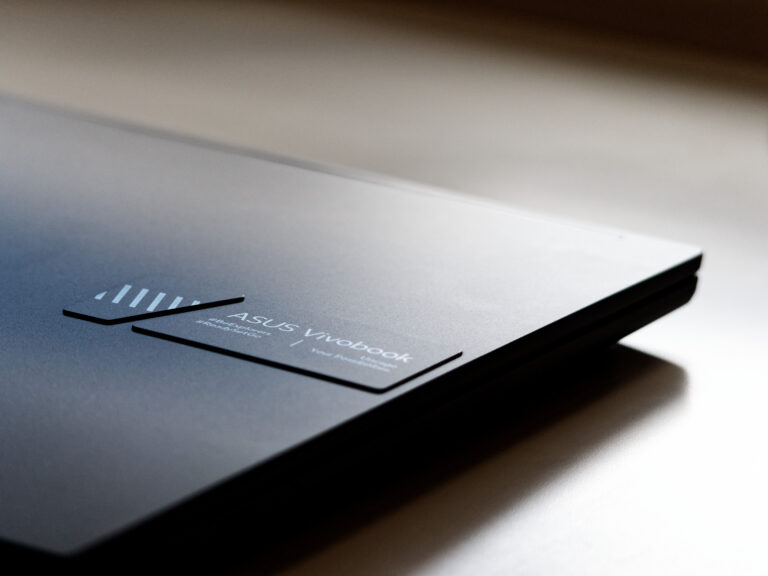 Right from the get go, the ASUS Vivobook 16X Pro OLED makes few concessions to the notion that the core appeal of a laptop should have anything to do with its looks. Simple clean lines see it skew closer to the world of industrial design than luxury electronics. In an era of trend-chasing and lifestyle-focused computing, there’s something refreshing about that bluntness.

I’ve been reviewing laptops for a fair few years now, and I don’t know if I’ve ever seen a laptop with this many bells and whistles attached to the display. Most of these concern the display. Rather than opt for quality or quantity, ASUS have tried to stack both decks in their favor.

The 16-inch 4K screen on the Vivobook Pro 16X is gargantuan compared to most other mainstream laptops. What’s more, this display comes with a laundry of other specs that compound the baseline appeal of the high resolution OLED panel involved.

Like many such laptops, the ASUS Vivobook Pro 16X is a machine that’s as defined by the screen on the outside as it is by the specs on the inside. The Vivobook Pro 16X OLED boasts a response time of 0.2ms, peak brightness of  550 nits, support for 100% DCI-P3 and Pantone-validated color, VESA Certified Display HDR support, touch sensitivity and a dedicated mode that reduces blue light, which primes it to reduce the eye strain associated with longer usage without compromising on fidelity.

Still, the most tangible design choice for many is going to be the 16:10 aspect ratio. Combined with the larger physical footprint, it gives the ASUS Vivobook Pro 16X OLED a more squared design that sets it apart from the slimmer rectangles found elsewhere.

This profile can take some getting used to. However, in practice, the realities of working on a laptop screen this big quickly set in. At times, the Vivobook Pro 16X feels less like a laptop with a bigger screen and more like a high-end desktop monitor with a more portable form-factor.

Unsurprisingly, this blurring of traditional laptop qualities extends into the means by which you use the Vivobook Pro 16X on a daily basis.

The keyboard is a little on the chunky side, but 1.5mm of keypress gives everyday usage a satisfying and desktop-like depth. The wider, high-precision trackpad yields similar experiences.

While ASUS haven’t gone the full ScreenPad route here (as seen with the latest Zenbook range), they have kitted the Vivobook Pro 16X out with a unique DialPad. This is essentially a virtual control dial that can be summoned onto the trackpad when needed.

It's a neat idea, but in practice, its uses are both too broad and frustratingly narrow.

While the ASUS Creator Hub app does let you tinker with and customise the DialPad for use with any application, scant few actually support any sort of functionality that you can't already do with hotkeys or basic shorrtcuts like Alt-Tab in Windows.

The exception to this rule is the Adobe Suite, which does currently support DialPad integration across Adobe AfterEffects, Premiere Pro, Photoshop and Lightroom Classic. Again though, there's not a lot here that you couldn't do by other and potential more intuitive means. 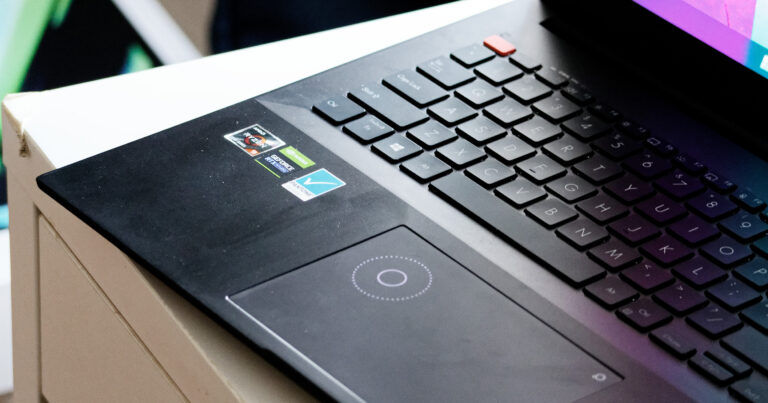 Ports-wise, the ASUS Vivobook Pro 16X OLED sits somewhere between the curated selection of inputs found in a modern Macbook and the library of legacy ports found in bulkier, enterprise machines like the ThinkPad P1.

Given the larger size and content creator bonafides, I was surprised to see only a single USB 3.2 Gen 1 Type-C port on the Vivobook Pro 16X. While this comes flanked by a trio of standard USB-A ports, two of these are USB 2.0. Only the third is USB 3.2 Gen 1. Unless you know what you’re looking for, the visual differences between the three are fairly easy to miss. It’s the kind of scattershot layout that only accentuates the existing issues with port standards rather than try to work around them.

Despite these inconsistencies, ASUS mostly hits the mark when it comes to ports here. Rounding out the above, you get a headphone jack, Micro SD slot and a HDMI 1.4 output. It’s hard not to wish for a little more, specifically a standard SD slot, but it’s easy to like what’s here.

There are a few other small touches worth noting here, such as a physical webcam shield, a microphone with built-in noise-cancellation tech, speakers that are integrated into the hinge, and a fingerprint sensor that’s built into the power key. Assessed individually, these are nothing new. The modern laptop landscape is as vast as it is diverse. Nevertheless, like the bundled-in subscription to Adobe Creative Cloud, these little details serve to make the overall package a little more robust.

The ASUS Vivobook Pro 16X is a laptop loaded with design choices that lean in and complement the process of helping you actually get work done, rather than lead in on looks.

The baseline specs for the ASUS Vivobook Pro 16X OLED are as follows.

What can be upgraded in the Vivobook Pro 16X OLED?

While the display on the ASUS Vivobook Pro 16X OLED is very much the main attraction, the rest of the spec sheet complements it well.

As standard, the laptop is kitted out with a minimum of 16GB of RAM, 512GB of SSD storage, NVIDIA GeForce RTX 3050 Ti graphics and an AMD Ryzen 7 processor. The model we reviewed rocked a Ryzen 9 processor, which is pretty much as good as AMD processors get (short of a Threadripper) when it comes to laptops.

Unfortunately, that spec sheet supremacy was rarely reflected in the benchmarks scores for the Vivobook Pro 16X OLED.

When it came to tests that leaned on the CPU and memory for the device, ASUS’ portable powerhouse failed to eclipse Apple’s M1-powered Macbook Pro or even the Lenovo Yoga Slim 7 Pro OLED.  It excelled on some fronts, but even when set to the dedicated performance mode it failed to push boundaries in the way that you might expect it to.

However, these figures don't tell the full story. Benchmarks rarely do.

The fact that the ASUS Vivobook Pro 16X OLED didn't deliver scores as high as that of Lenovo's Yoga Slim 7 Pro when it came to Novabench or Cinebench doesn't discount the reality that this machine has something that Lenovo's laptop lacks: a dedicated graphics card.

For several years now and for a variety of globe-spanning factors, getting ahold of a graphic card has been both expensive and convoluted. In this environment, laptops with a dedicated graphics card like the one in the ASUS Vivobook Pro 16X OLED offers exceptional, and arguably unprecedented, value to those who need them. Rendering 3D graphics in Blender this machine versus on older or integrated graphic hardware turned workloads that would have taken minutes into seconds.

What's more, if you’re working in a professional role where 3D rendering is needed, you’re probably going to have a much easier time hunting for this laptop than you will a conventional graphics card.

Burned down via streaming video content on YouTube, the 61Wh battery inside the ASUS Vivobook Pro 16X OLED lasted 9 hours and 58 minutes. That’s a fairly respectable result, but one that definitely feels a little on the short side given the hit to portability that comes with the larger form-factor.

For some, the impact of this blow to the ASUS Vivobook Pro 16X OLED’s appeal may be softened by the fact that the device supports quick charging via the 120W USB Type-C charger that it ships with. That’s a lot of watts, which goes some way towards making up for the fact that the USB Type-C ports on the Vivobook Pro 16X OLED can’t be used for charging. 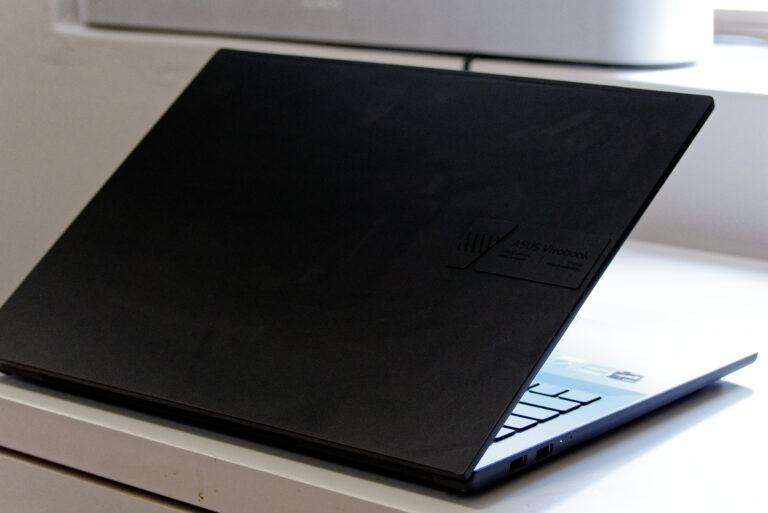 At a recommended retail price of $2899, the ASUS Vivobook Pro 16X ends up being one of those laptops that’s really difficult to recommend without a few caveats.

Given the overlap in the design and specifications when it comes to this particular laptop and the rest of this year’s Vivobook Pro lineup, it’s clear that the thing you’re really paying extra for here is that physical screen space. And even for enthusiasts, finding the value in those additional pixels can be tricky.

Not everyone needs a screen this big, this bright or this squared. However, if your needs are more pro-grade, then the math changes. If you’re the kind of user whose needs find those quirks to be quintessential and a dedicated graphics card to be a necessity rather than a nice-to-have, then the Vivobook Pro 16X OLED does provide both for a half-decent price. Laptops with a 4K OLED screen this big and nice are available through other OEMs like Dell, but you’re almost certainly looking at spending more.

The Vivobook Pro 16X isn't a laptop for everyone, but if you can tell at a glance that it’s big screen is going to be to your benefit, you’re gonna love it.