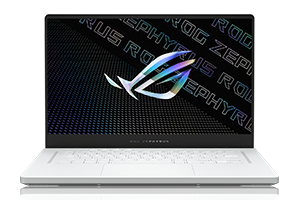 Despite a unique form factor that leaves it leaner than most gaming laptops, the ASUS ROG Zephyrus G15 (GA503) reaps the benefits of pairing up a best-in-class AMD Ryzen 9 5900HS processor with Nvidia’s latest GeForce RTX 3000 Series GPUs. It isn’t the cheap choice, and it won’t quite cut it as a desktop replacement, but if you’re after something that’s both sleek and surprisingly powerful, it’s the gaming laptop to beat. 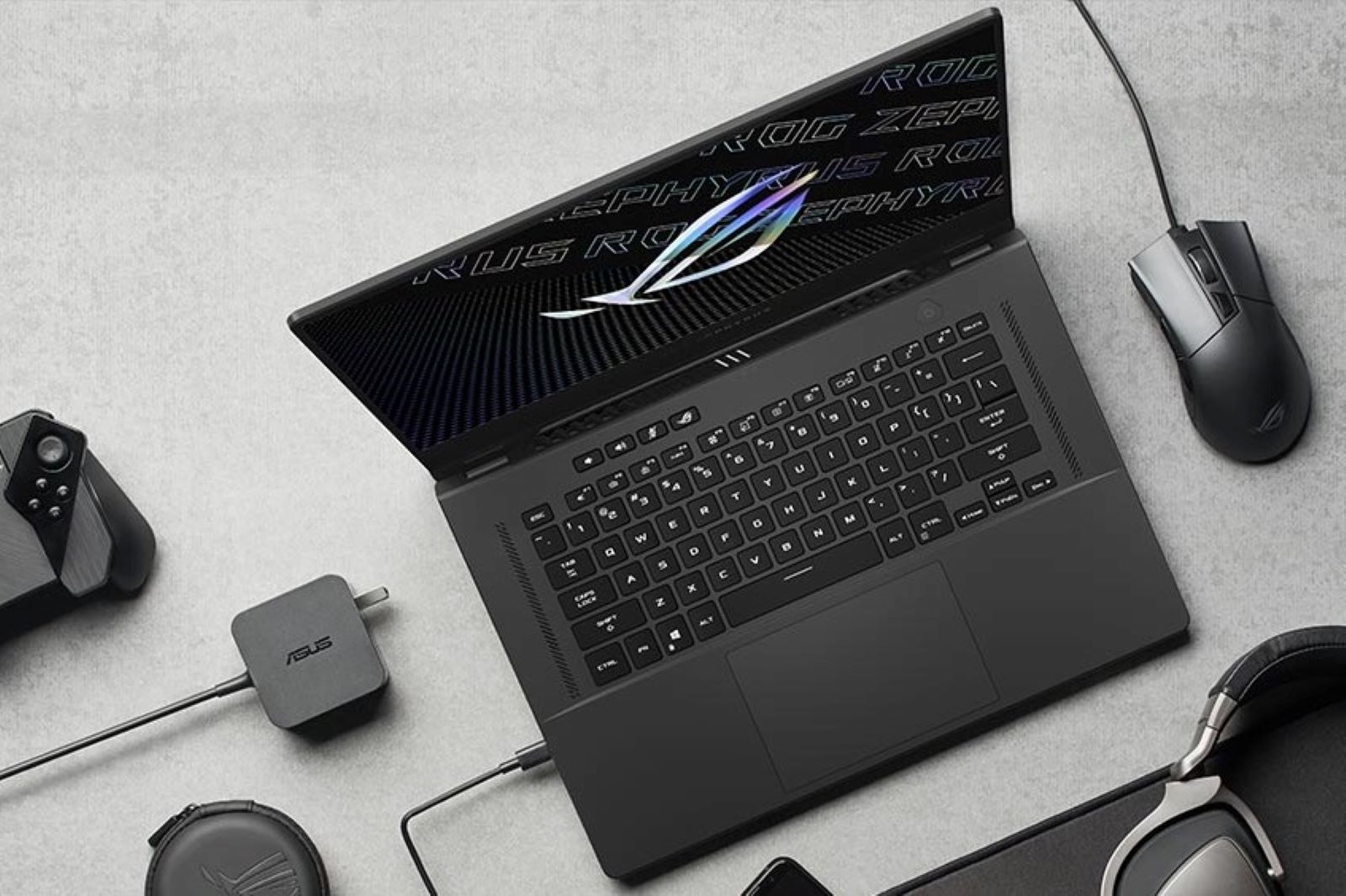 How much does the ASUS ROG Zephyrus G15 (GA503) cost in Australia?

You won’t find any extras or value-adds within the packaging for the ASUS ROG Zephyrus G15. Beyond the laptop itself, you get a 200W AC/DC Power Adapter, a manual and a warranty card. That’s it.

Rather than play to them, The ASUS ROG Zephyrus G15 is the gaming laptop designed to defy your expectations about gaming laptops. Rather than rock chunky heat vents and a Christmas tree’s-worth of RGB lighting, it’s thin, light and more inconspicuous than most of its competitors.

If you’ve done much research, you might already know that much of what works about the ASUS ROG Zephyrus G15 has inherited from the even leaner and meaner ROG Zephyrus G14. ASUS’ hasn’t reinvented the wheel here. They’ve just made it a little bigger - though thankfully without adding too much bulk in the process.

Two colour options are available, but the bone-white variant of the device is easily the more striking. Even if it means living with more visible wear over time, it makes for a great contrast to other gaming laptops.

The headliner here is the Zephyrus G15’s display, which works out to be 15.6-inches in size with a native 1440p resolution, a 165Hz refresh rate, 3ms response time and 100% DCI-P3 colour gamut coverage. Though it lacks a formal Nvidia G-Sync certification, this screen does feature a more generic Adaptive-Sync that looks to make up some of the difference.

Beyond the look and feel of the thing, the ROG Zephyrus G15 also boasts a bevy of everyday quality-of-life inclusions and improvements. These include a fingerprint sensor (integrated into the power button), a larger touch-pad and ASUS’ iconic ergo-lift hinge design. The last of these is probably the most meaningful of the bunch since it doesn’t just make the Zephyrus G15 more comfortable to type on but also assists with airflow and thermal management. 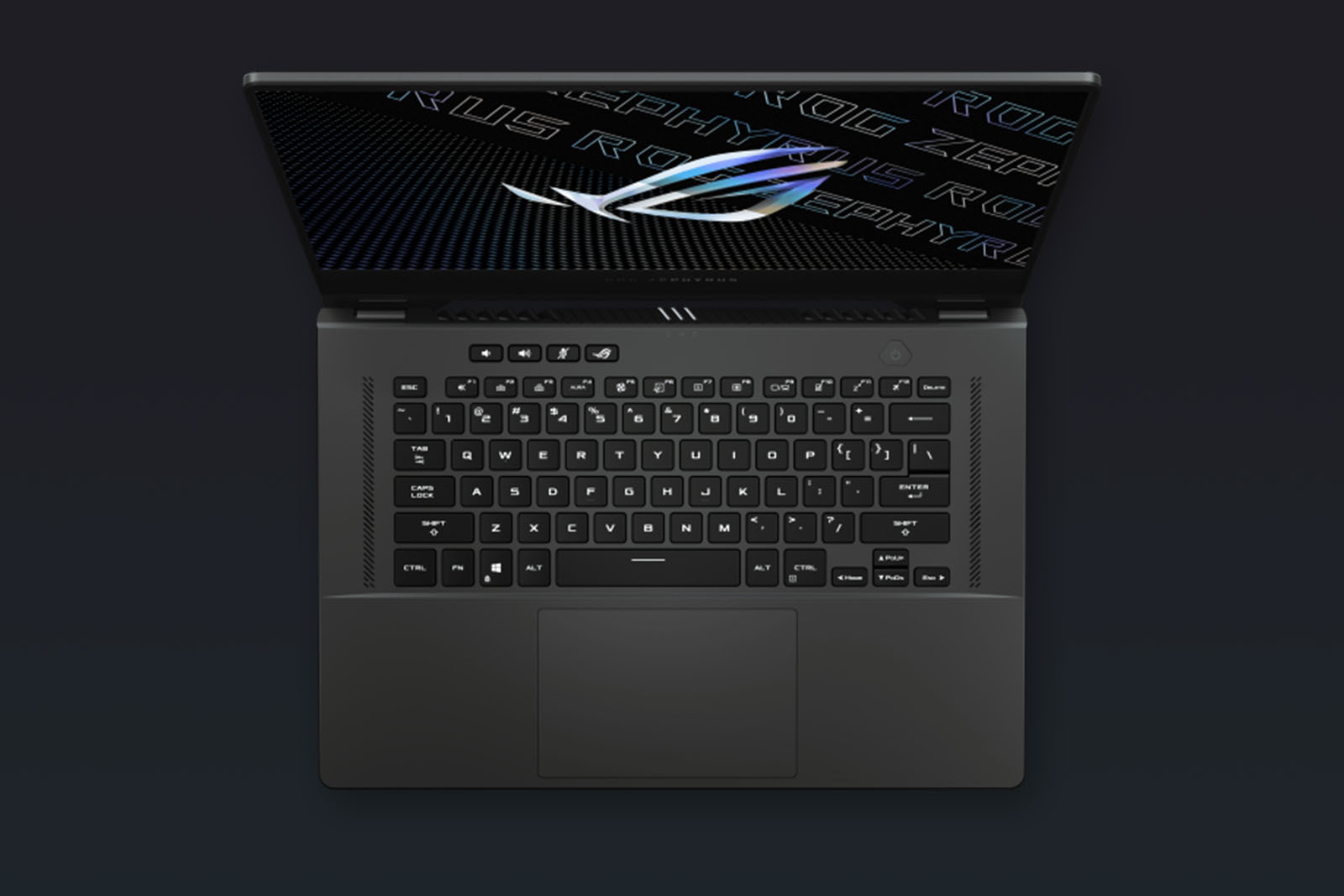 A few more minor details let slip that ASUS doesn’t see the Zephyrus G15 as an ‘every bell and whistle’-worthy device. The keyboard here is backlit but not RGB and the larger trackpad is made of plastic rather than the glass found in the previous generation. These aren’t precisely dealbreakers, but they’re not exactly the highlight of the experience either. Take the bizarre omission of a built-in webcam. Even if this exclusion doesn’t directly impact or affect the experience of gaming on the ASUS ROG Zephyrus G15, it does feel a little unnecessarily frugal.

In the age of working-from-home and streaming megastars, it’s a choice that leaves you scratching your head.

There are six discrete heat pipes under the hood, four heatsinks and two fans pulling heat away from the guts of the Zephyrus G15. There’s also an extra layer of liquid metal coating the CPU and a nifty self-cleaning system that works to cleanse the interior of the Zephyrus of dust and other particles. This setup works in tandem with the different scenario profiles (configured via ASUS’ Armory Crate software) to maximise performance given the situation. For example, there’s a silent mode you can use to quieten the fans, while the performance and turbo modes let you crank even higher framerates out of the hardware.

While the ROG Zephyrus G15 takes plenty of visual and design cues from the G14, it also ditches what was arguably the most striking feature of its predecessor: the AniMe Dot-Matrix display on the back. The perforated exterior of the G15 looks almost identical, but it lacks the nifty programmable array of bulbs that brought a new dimension of customisation to the gaming laptop equation.

Last but not least, there’s a set of Dolby Atmos-powered speakers. For the most part, these sound decent enough, though they sometimes struggle to compete with the fans’ humming inside the ROG Zephyrus G15 when under heavy load. Although it earns its stripes as relatively quiet by gaming laptops standards, the Zephyrus G15 is far from silent. We’d recommend a decent set of headphones if you’re after the best experience. 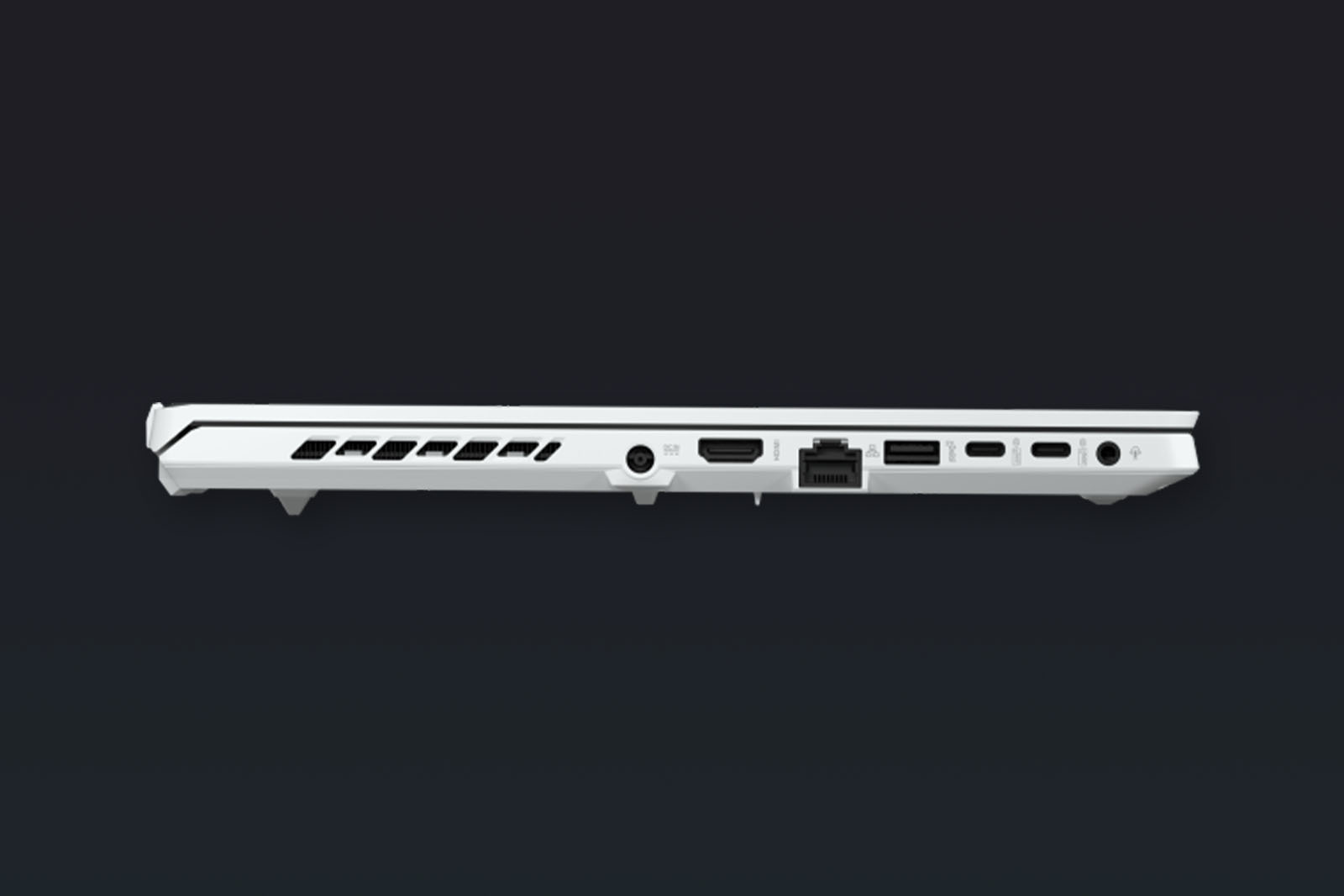 The baseline specs for the ASUS ROG Zephyrus G15 are as follows.

Storage: The baseline ASUS ROG Zephyrus G15 comes with 512GB of M.2 NVMe PCIe 3.0 SSD storage. Some of the other models bump that upwards to a more generous 2TB.

Memory: The baseline ASUS ROG Zephyrus G15 comes equipped with 16GB of DDR4-3200 SO-DIMM RAM, but this is upgradable to a maximum of 48GB in memory modules.

If you’re humble enough to drop things down to 1080p, the ASUS ROG Zephyrus will be able to confidently chew up and spit out a silky-smooth gaming experience with an uber-high frame rate pretty much no matter what you throw at it. If you can swallow your pride, you can even get infamously demanding titles like Cyberpunk 2077 up to the triple-digits for frames-per-second.

If you prefer 1440p, the numbers aren’t nearly as high, but they’re more than respectable. You’re looking at a clean and consistent 60FPS for big, visually-intensive AAA experiences like Destiny 2 and Doom Eternal, even when you tick every bell and whistle in the settings menu. If that’s not enough, you can use the Zephyrus G15’s in-built overclocking tools to push things even further. It didn’t take much tinkering with the ASUS’ Armory Crate software to squeeze an extra 20FPS or more out of hardware-intensive titles like Apex Legends, Total War: Three Kingdoms and Kingdom Come: Deliverance. 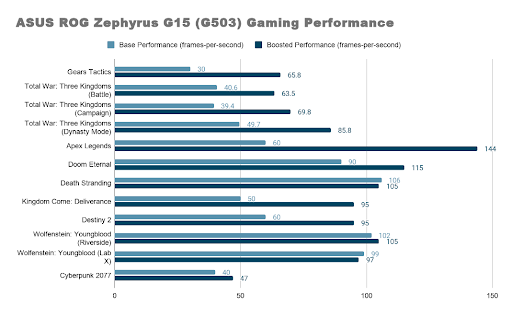 In terms of the more standard benchmarks, the ROG Zephyrus G15 scored high marks across the board. 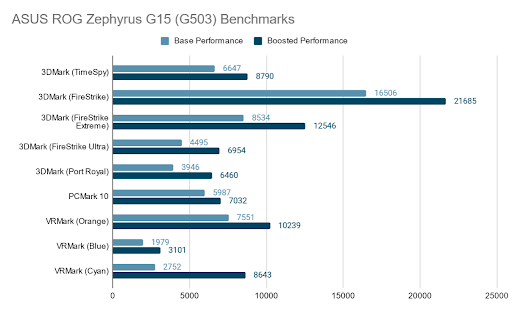 ASUS’ original ROG Zephyrus was the gaming laptop that put the company on the map and marked them as a serious contender in the gaming laptop niche. Their latest riff on the formula lives up to that reputation and then some.

The new ROG Zephyrus G15 is leaner, cheaper and provides more bang for your buck than most laptops in its weight class. It’s not that it doesn’t cut corners but that it’s smart about it. ASUS have picked the right battles and stayed well clear of compromise on raw performance.

If you’re serious about getting a gaming laptop but don’t need a full-blown desktop replacement, the ASUS ROG Zephyrus G15 is a standout option that you shouldn’t walk past without consideration.