The Surface Laptop Go holds up as a comfortable and affordable choice if you're happy to work within its limitations. 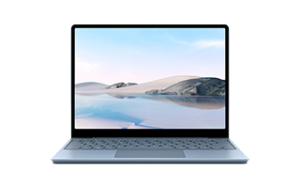 There are numerous options for those who want to go even cheaper, but Microsoft’s own Surface Laptop Go sets the bar when it comes to affordable Windows laptops. It delivers a combination of design, specs and performance life in a way that puts it in conversation with far pricier products.

Rather than ask what sacrifice you’re willing to make, the Surface Laptop Go asks you to think about what you really need in a laptop. That’s not to say that there aren't compromises or shortcomings here, but if you’re already in the market for a budget-friendly laptop, the Surface Laptop Go makes a compelling argument that its particular caveats are trade-offs you’re going to be willing to make.

Low base memory and storage 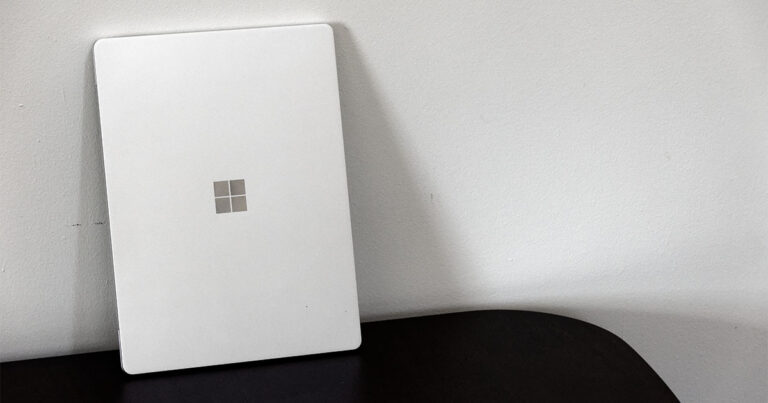 Here’s how much the Microsoft Surface Laptop costs in Australia

The Microsoft Surface Laptop Go is as light on extras as budget laptops get. The packaging here is simple, clean, and doesn’t include anything apart from a 39W power brick and a Surface Connect cable that can be used together to charge the device. 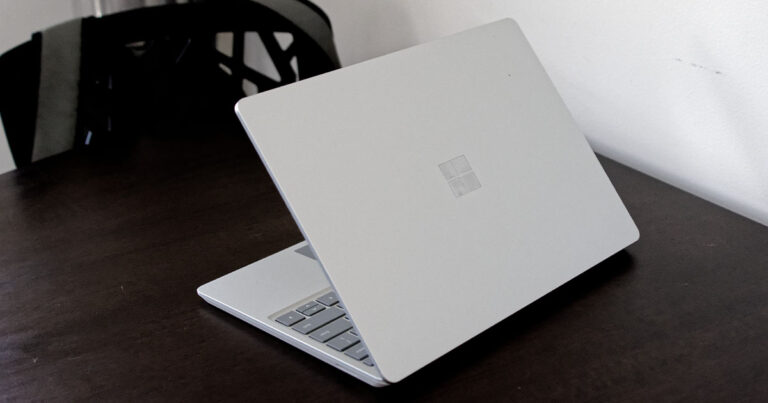 There’s a real crispness to the picture quality here that’s easy to like.

There are simple laptops, and then there are laptops that embody the idea of simplicity in the way that the Surface Laptop Go does.

All of this is to say that the Surface Laptop Go succeeds at making a basic, frill-free Windows experience feel as frictionless as possible. It’s nothing fancy, but everyday workflows feel snappier and more responsive than the hardware would suggest.

There’s nothing here that doesn’t need to be, aside from maybe the glitzy logo on the back. The Surface Laptop Go features both a predictable array of ports on the outside edges plus a satisfying - and sometimes surprisingly - punchy keyboard on the inside.

Wrapped between a soft underside and a more metallic top halves of the machine is a 12.4-inch PixelSense display. This aspect-ratio is a little irregular and the maximum brightness on the panel is sometimes a little dimmer than I’d like, but for most things it does the trick.

Even as someone who knows about the many benefits of going with a laptop with better screen tech, the Surface Laptop Go made me feel like those perks were something I’d be willing to lose for the right price. There’s a real crispness to the picture quality here that’s easy to like. 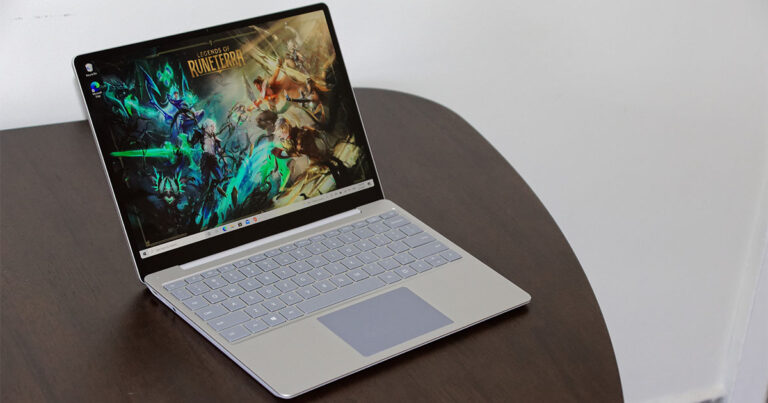 As opposed to the regular Surface Laptop, the Surface Laptop Go does come with several key compromises. If you’re looking to choose between the two, you’ll definitely want to keep these in mind because most of them aren’t immediately visible or noticeable.

Even the highest spec version of the Surface Laptop Go available still loses out to the superior processors, additional storage options, larger display, and additional RAM found in the mainline Surface Laptop.

One of the few areas where I think the minimalist tendencies of the Surface Laptop Go backfires is the port selection. While the build quality is great and the specs managed my daily workflow well enough, the fact that you are limited to a single USB type-A and USB type-C port is likely to prove a problem over a long-term use. If you’re pairing this thing up with a non-Bluetooth mouse, you’re already halfway towards being out of ports completely - which is not great.

The other notable drawback of the Surface Laptop Go is the fact that it ships with Windows 10 S. Although this choice does ensure the device feels pretty snappy right out of the box, it also means you can’t install applications that exist outside the Microsoft app store without upgrading to Windows 10 Pro. This is free, but it’s annoying that you have to go through the process at all.

The baseline specs for the Microsoft Surface Laptop Go are as follows.

What can I upgrade? 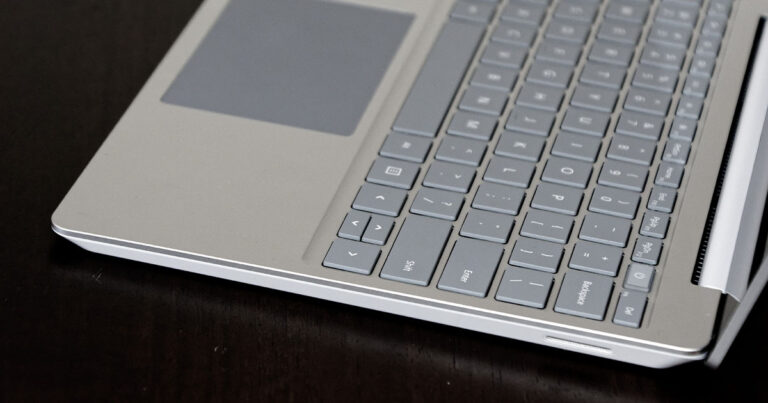 It’s humble, but it’s got a lot of heart.

The 10th Gen Intel Core i5-1035G1 found inside the Surface Laptop Go is far from a high-performance chipset, but it does sit above the average relative to the rest of its generation of mobile processors. This makes it a suitable match for the design sensibilities on display here. It’s humble, but it’s got a lot of heart.

In action, I found that the Surface Laptop Go was surprisingly capable given the price tag and the processor involved. However, when it came to the benchmarks, the difference between the hardware here and pricier options became pretty apparent.

The results varied, but they were hardly surprising. If you’re looking at more intensive uses like video rendering, you’re going to be much better served by something a little more expensive.

This reality is made all the more clear when by the noisiness of the fans of the Surface Laptop Go. While the speakers on the device do a good job of covering up the occasional bout of whirring, I did still notice them when the hardware was under heavy load. It’s not as loud a gaming laptop and the thermal output isn’t particularly taxing, but I still found it to be a clear downside you’re inevitably going to encounter when you go with a laptop this cheap.

As it lacks a dedicated GPU, the Surface Laptop Go struggles to run games outside those that can exist within a web browser. However, for those with a fast internet speed and a subscription to Xbox Games Pass Ultimate, the recent launch of Xbox Cloud Streaming is an option that might offset these technical shortcomings.

Burned down via streaming video content on YouTube, the 39.7Wh battery inside the Surface Laptop Go lasted 7 hours and 41 minutes. That’s not terribly long, but it doesn’t feel like major compromise either. It gives you enough to get through a regular day of usage, but little else.

In situations when it does run out of juice, the Surface Laptop Go can be charged back up fairly quickly by either the Surface Connect charger that the device ships with or another USB Type-C charger from another brand.

Even if it doesn’t look the part, it feels super easy to make comparisons between Microsoft’s Surface Laptop Go and Apple’s entry-level MacBook.

Like the latter, the Surface Laptop Go feels like an effort to manifest the best baseline experience for what this operating system can offer. Microsoft’s track record for this is mixed, but it actually feels like they managed to succeed here.

If you’re doing a bang-for-buck comparison, it might be possible to find other laptops in this price-range that give you a little more RAM or a more impressive display. However, if you’re happy to sacrifice some frills and work within the limitations, the Surface Laptop Go holds up as a comfortable and affordable choice for those who want something that can reliably handle the essentials of on the go computing. 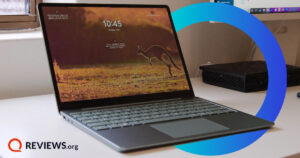