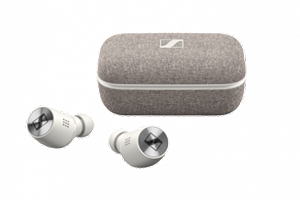 Sennheiser’s sequel to the 2018 Momentum TW (True Wireless) earbuds is an almost flawless improvement on everything that made the original a hit. With a few years in the kitchen, Sennheiser has managed to improve overall battery life (and listening time) and add ANC (active noise cancelling) without compromising the concealed form factor and extraordinary sound we loved in the original. But this sequel's bigger budget and smoother finish result in one slippery pair of buds with a higher price tag. 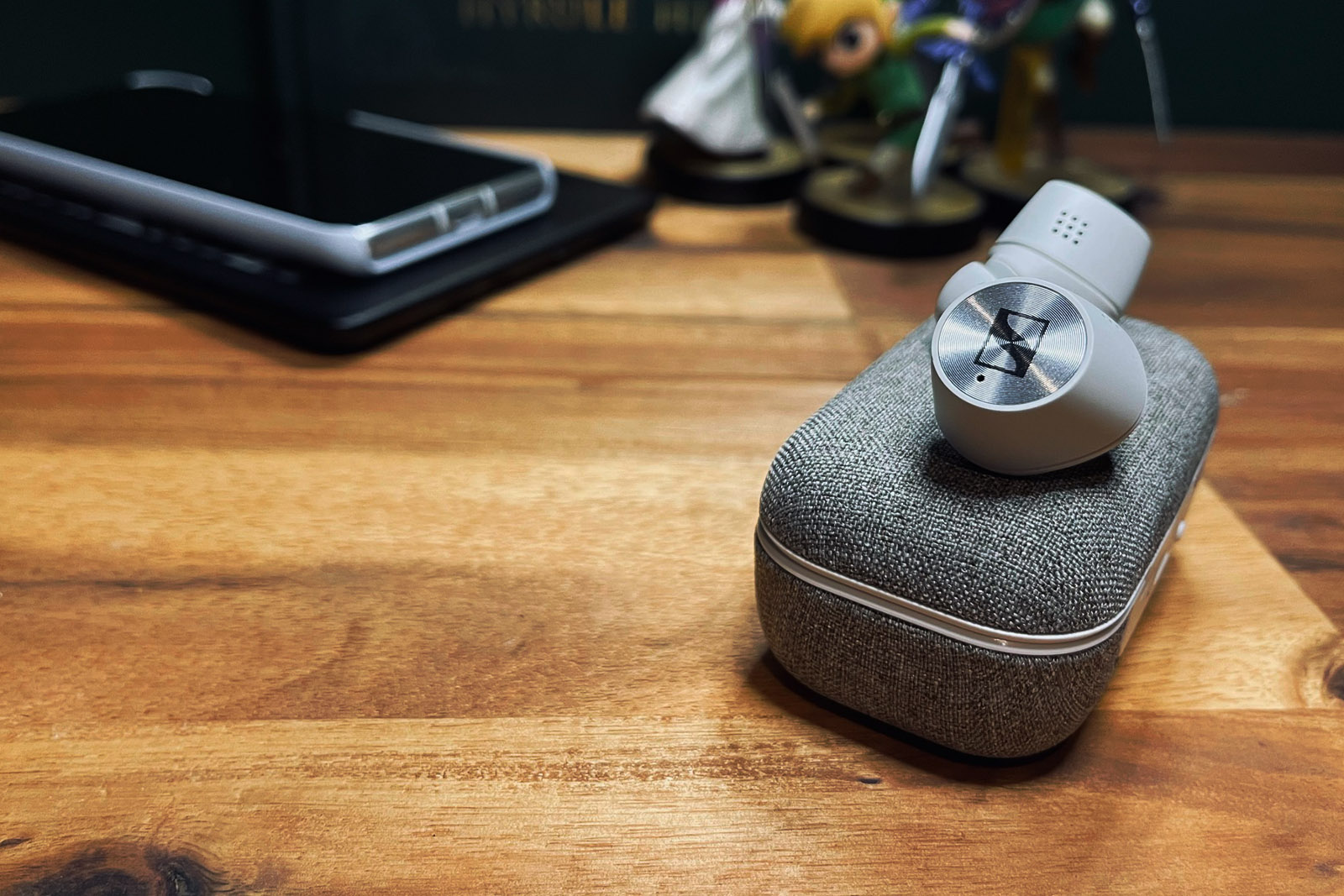 Sennheiser’s continued investment in the true wireless game has given us an incredibly solid pair of buds but the company expects you to foot part of the R&D bill. Sennheiser charges a breathtaking $499.95 RRP for the Momentum TW 2. That’s more expensive than the Apple AirPods Pro, Bose QuietComfort Earbuds and Jabra Active Elite 75t. It’s the priciest pair of buds we’ve reviewed in a long time.

Thankfully, you can find some decent deals that shave off a good chunk of the premium price. For example, The Good Guys currently have the Momentum TW 2 at $377 though that deal finishes soon. Otherwise, Amazon has consistently good deals on the Momentum TW 2 (35% off at the time of the writing).

The best prices on Sennheiser Momentum True Wireless 2 in Australia

Design and comfort: Handle with care

Back when they first released, the highlight of the original Momentum was its elegant and discreet design. Thankfully, those principles have carried over in the Momentum TW 2. You’d struggle to tell the two products apart if not for the updated microphone design.

They come in black or white and both options are adorned with a textured silver touchpad on each ear. They’re light (6 grams per bud) and don’t stick out past the outer ridge of your ear. The 58g case is still wrapped in a nice textured fabric that feels comfortable (and secure) when handled.

Still, there’s one issue with the design that’s more obvious now I’ve tested out Jabra’s Active Elite 75t (which is the closest competitor, design-wise) and it’s just how slippery these buds can be. The Momentum TW 2 buds boast a smooth plastic finish. They taper out from the touchpad and back in again towards the ear, offering no grip whatsoever.

Grab an earbud with a little too much pressure and it’ll slip between your fingers and fire across the room. I’d say I’ve fumbled an earbud roughly every third or fourth time I’ve had to handle them. It happened just moments ago. I found it, thankfully, but if anyone else had been in the room, I’m pretty sure I’d be up for manslaughter. This was a problem with the last Momentums but it really stands out now that a stray bud could cost me $499.95, give or take.

The Active Elite 75t from Jabra has a slightly rubbery, textured surface that makes them a lot easier to grip but even the non-sporty Elite 75t are a little easier to grasp than the Momentum TW 2s.

All of this is to say, a little extra grip would go a long way. Maybe there’s room in the Sennheiser lineup for a sports variant but it couldn’t possibly cost any more than Sennheiser already charges for the Momentum TW 2.

If you do happen to let this pricey pair of buds slip in the wet, you’re protected with IPX4 water resistance (just like the previous model). That won’t save you if they go for a dip in the toilet bowl but a bit of rain or a splash of water here and there won’t do much damage. 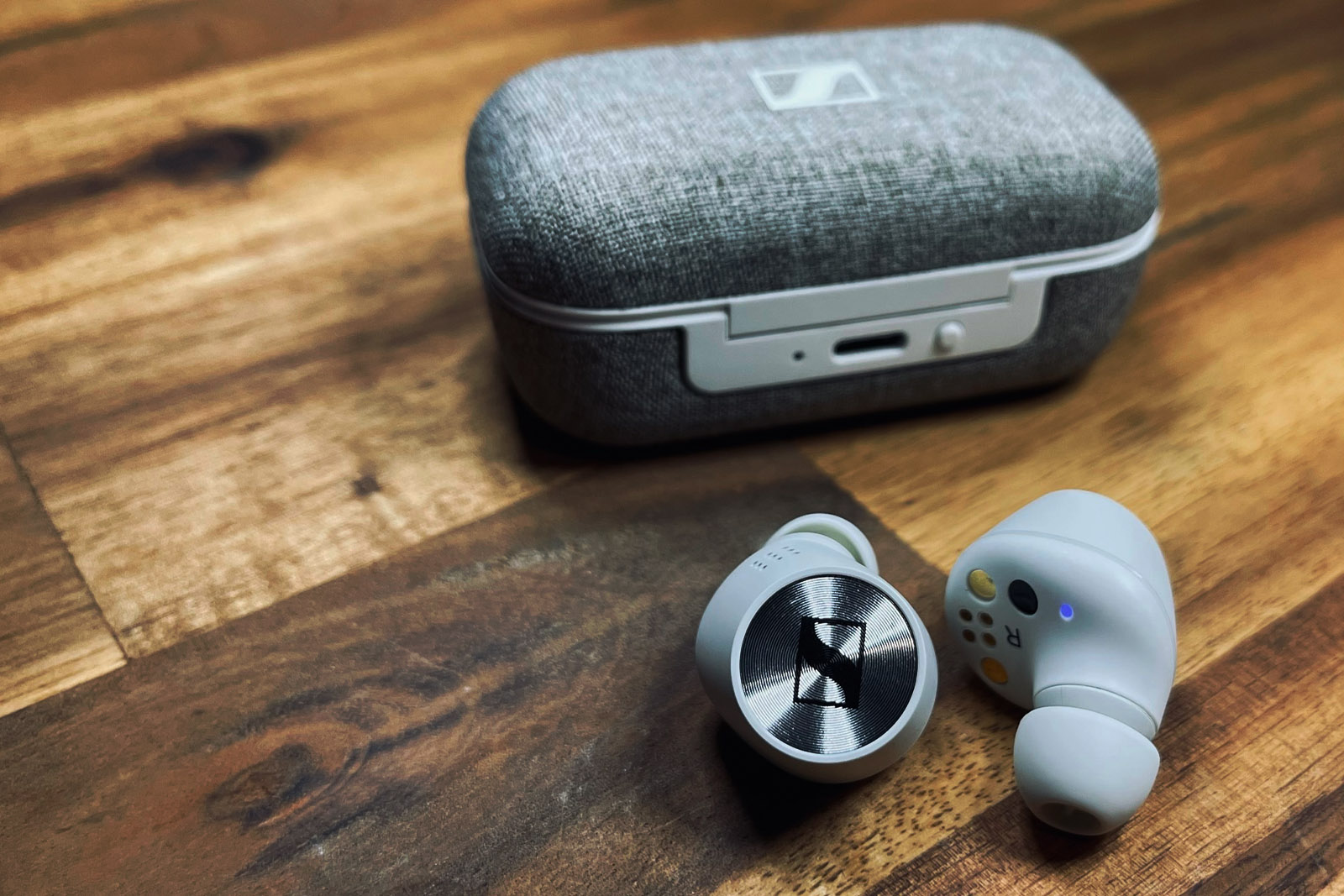 Comfort: Lighter than before but not perfect

In addition to being a slippery so-and-so, the Momentum TW 2 also isn’t the most comfortable pair of earbuds out there. I can go an hour or two max before needing a breather. It’s nowhere near as uncomfortable as the Audio-Technica ATH-CKS5TW but not as easy on the old King Lears (ears) as the Jabra Active Elite 75t. They’re somewhere in-between. Perfectly suitable for most.  I'd recommend trialling out each of the four tip sizes (XS, S, M and L) and even switching between two sizes regularly if you want to avoid a conched out concha.

Controls: Not the worst touch controls

Briefly touching on controls, the Momentum TW 2s don’t stray from the incredibly annoying standard of touch controls but they are a tad more intuitive and responsive here than what you’ll find in some of its competitors (like the Bose QuietComfort Earbuds).

There are some clever little audio cues to let you know when you’ve tapped once, twice or three times and I’m yet to experience any issues with them recognising my touch. The touch control scheme can be just as confusing as other brands but the equally intuitive Sennheiser Smart Control app (iOS and Android) will give you a full rundown on the comprehensive controls. 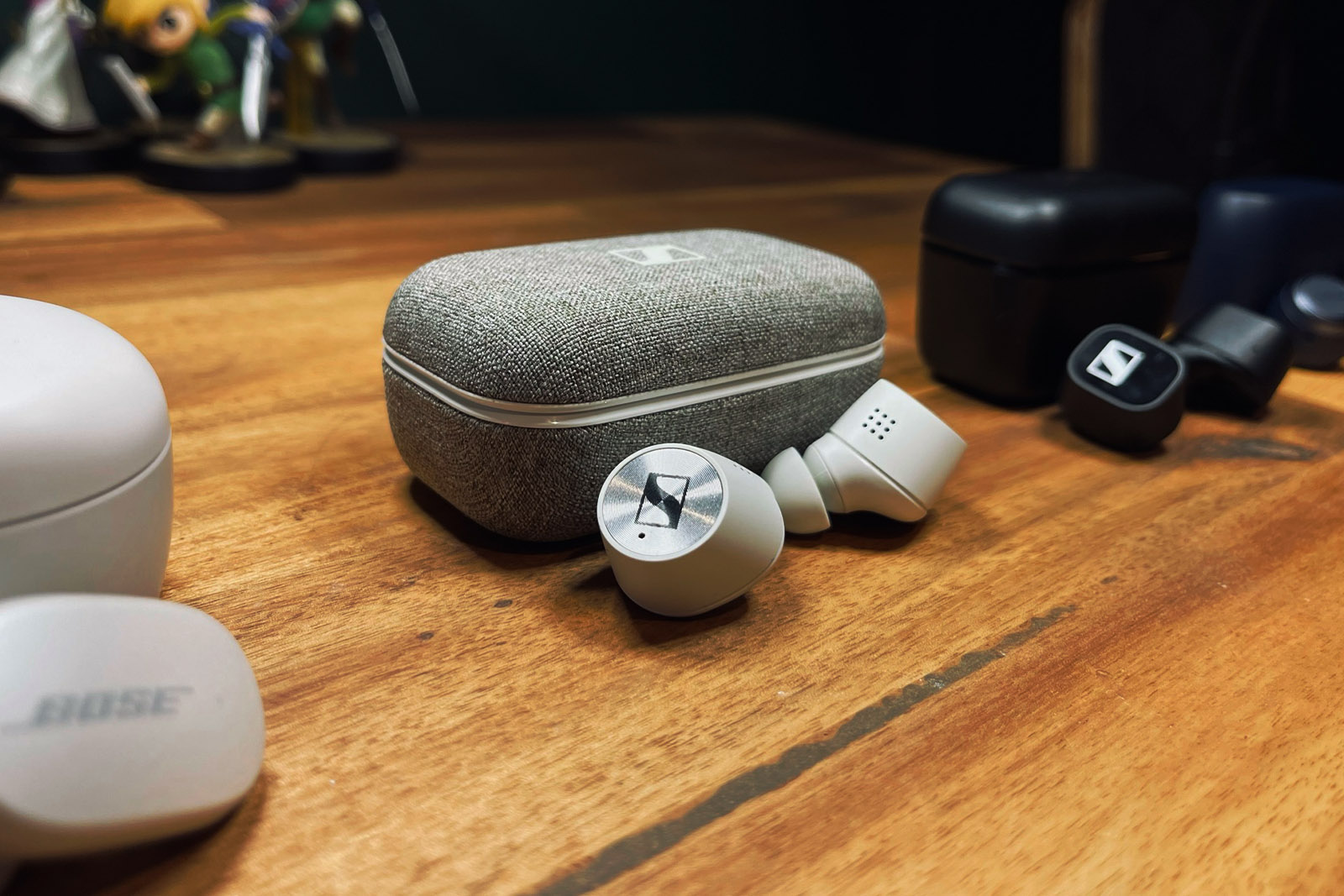 Listening to music with Momentum TW 2

In this long journey of true wireless earbud testing, it’s hard not to feel like I’m parroting my previous sentiments with a little +1 attached but that’s the case with the Momentum TW 2 upgrade. It’s building on some of the best-sounding buds in the game. ANC goes a long way in lifting the experience to another level but otherwise, the overall sound profile remains just as clean and comfortable as it was with Sennheiser’s original Momentum.

Getting balanced bass with in-ear headphones is a constant struggle for manufacturers but I don't think anyone’s done it better than Sennheiser has here. Naturally, the compact build of truly wireless earbuds makes it tough to reproduce what can be achieved with a good pair of over-ear headphones. A lot of brands end up over-compensating, with a bass-heavy profile that can feel like it’s thumping your brain when you kick the volume up a notch. With the Momentum TW 2, you get rich bass that never feels like a direct assault on your eardrums, no matter how high you crank it. Admittedly, I’m a bit of a sucker for burly bass but I find the Momentum TW 2 satisfies my addiction to bass without sacrificing any clarity (or comfort) when listening at a high volume. That’s great news because you’ll be compelled to dial the Momentum TW 2 as high as they go.

Songs with a particularly crowded soundstage are a joy to completely immerse yourself in. Take 'Thriller' for example. Between the vocals, the backing harmonies, the synthesizers, drum machine, electric guitar, pipe organ and piano—not to mention the busy horns section and additional sound effects, like footsteps and howling—there’s a lot going on.

Growing up, listening to 'Thriller' through the FM radio of a 1994 Hyundai Excel was sick, but it was all just one big funky electrical soup to my tiny baby ears. Listening to 'Thriller' with the Momentum TW 2 feels like I’m listening to an all-new song, like a ground-up remake instead of a remaster. Every instrument and effect listed above (plus plenty more) is delivered and positioned with spectacular clarity.

The marquee upgrade between the Momentum TWs and Momentum TW 2 is ANC (Active Noise Cancelling). For this type of earbud, with smaller silicone ear tips, the Momentum TW 2 does a fantastic job of cancelling out general chatter and everyday hustle and bustle. It’s not quite as good at ANC as Bose has managed with its QuietComfort Earbuds (or Sony’s WF-1000XM3) but again, they’re a different breed of buds.

That’s not a bad thing. If you find you don’t need ANC switched on, you can save yourself a fair bit of battery life with it switched off.

For obvious reasons, I haven’t been able to test the ANC during air travel (which is where it comes in handy most) but my everyday tests have shown the ANC technology Sennheiser uses is competent at blocking out the low rumble of passing trains one street away from my home office.

The call quality of the original Momentums was perfectly fine but Sennheiser seems to have improved ambient noise reduction in the latest model. Anecdotally, outside rabble (like passing cars and blowing gales) have less of an impact on calls (on both ends of a call).

Call quality is better across the board. There don’t seem to be any significant improvements to the microphone itself, the pinhole mic of the last generation has been replaced with an expanded grill, which might be helping with the overall clarity of my voice on calls. 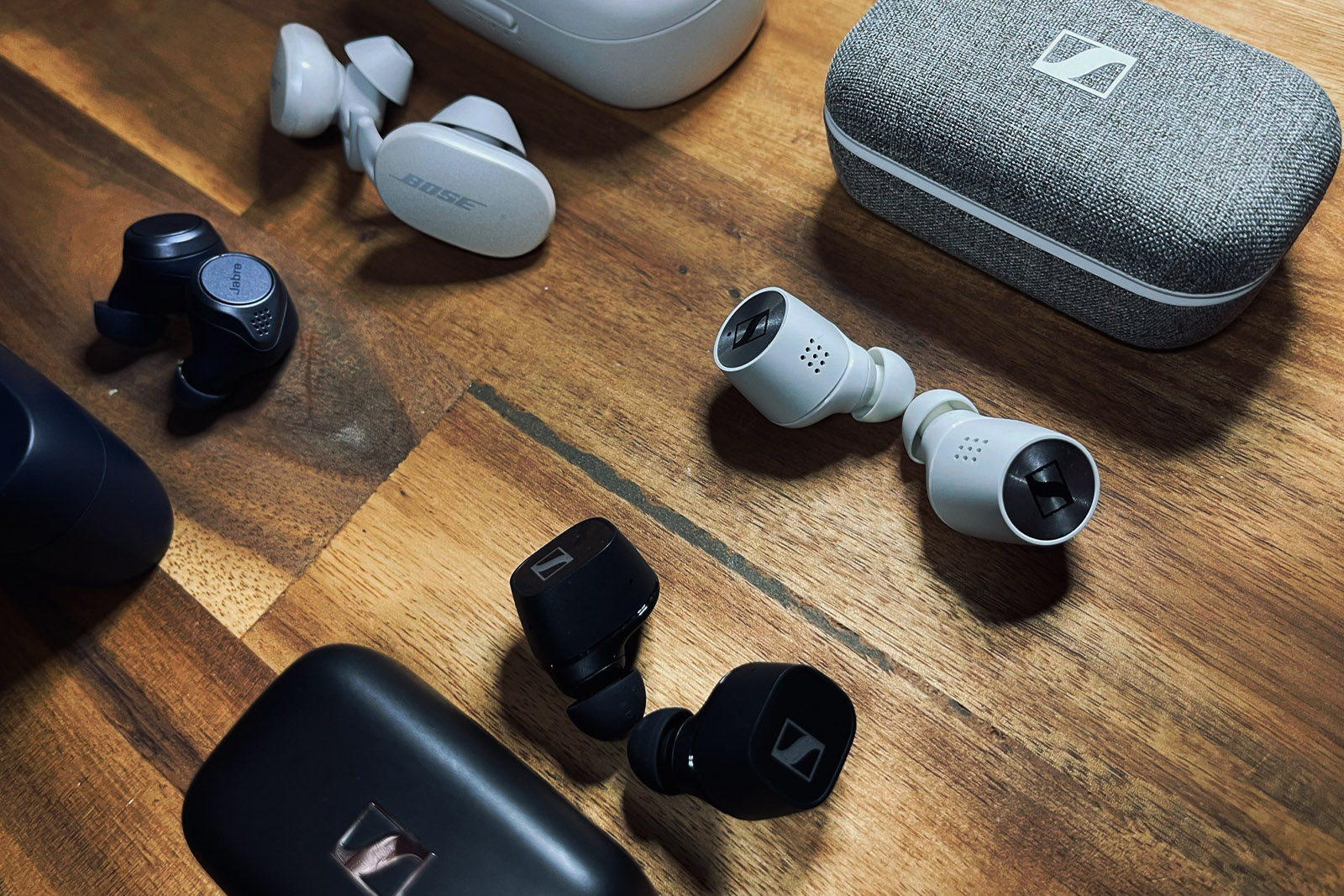 Better battery life makes up for the ANC drain

The Momentum TW 2’s battery lasted about as long as expected in our tests. Running music through the earbuds at 75% volume with ANC switched on, the earbuds conked out at a bit over 4 hours.

Still, Sennheiser gets a slap on the wrist for advertising 7 hours of playback (per bud) without any context.

This is an increasingly cheeky trend from headphone manufacturers where they advertise figures that don’t take into account the toll that ANC, a feature that’s switched on by default, takes on battery life. Instead, they typically market an absolute figure with a little asterisk and a vague footnote on testing conditions.

Just be upfront about how long the buds last with ANC switched on, nobody will judge you. (Okay, there might be a little judgement).

While the overall battery life has been improved from the original Momentums (which lasted 4 hours, roughly) that’s mostly to compensate for the added drain that ANC introduces. If you use the Momentum TW 2 as intended, you’ll get about the same battery life as before.

Of course, none of this changes the fact that Sennheiser has more than doubled the overall amount of battery life you get from the buds and case combined (28 hours overall vs the Momentums' 12-hour total) without adding any significant heft to the charging case. 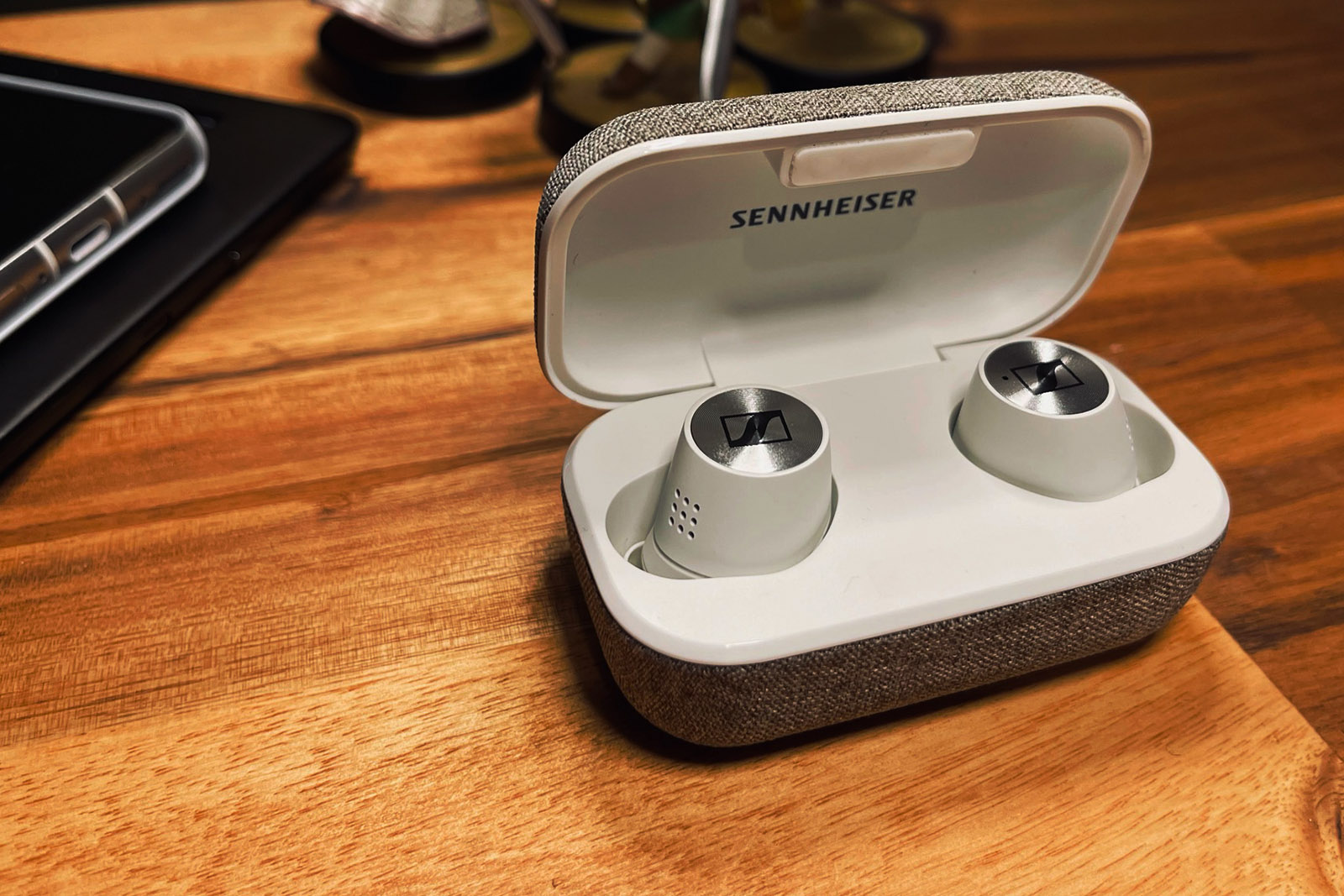 If you’re willing to pay the premium for first-class audio and design, the Momentum TW 2 should be a top contender on your list. Personally, I’d rather save a bit of cash for a more secure and comfortable pair of earbuds, like the Jabra Active Elite 75t, or hold my breath for Sony’s upcoming WF-1000XM3 replacements, even if the overall audio quality isn’t quite as good.

The generational gap between the Momentum TW and the Momentum TW 2 also isn’t significant enough to warrant an upgrade if you're already rocking the last-gen buds, but the added ANC is a welcome addition if you’re devoted to the Sennheiser brand.