The Jabra Elite 4 Active are fitness buds for the frugal

Frugal and focused on fitness. 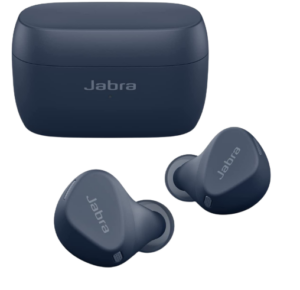 The Jabra Elite 4 Active are as interested in being fitness-friendly as they are kind on your wallet. They're not as heavy on fidelity, features and flair as some, but the straightforward approach to wireless audio here is likely to be a surefire hit for others.

The Jabra Elite 4 Active aren't the crown jewel in the brand's current roster, nor are they a contender for the title of best true wireless earbuds. Still, they're a great reminder of how far the brand has come over the past six years.

It's easy to overlook or forget, but Jabra's original Elite Sport were one of the first true wireless earbuds to land in the hands of consumers. Back in 2016, Jabra beat the first-generation Apple AirPods to market by several months. What's more, the Elite Sport laid a foundation that remains surprisingly intact across Jabra's current crop of Bluetooth-based audio options.

The Jabra Elite 4 Active puts a gym and wallet-friendly twist on that formula. This take is light on flash and flair, but big on value for budget-oriented buyers. It's not hard to want more than the Elite 4 Active can give, but it's easy to like them. 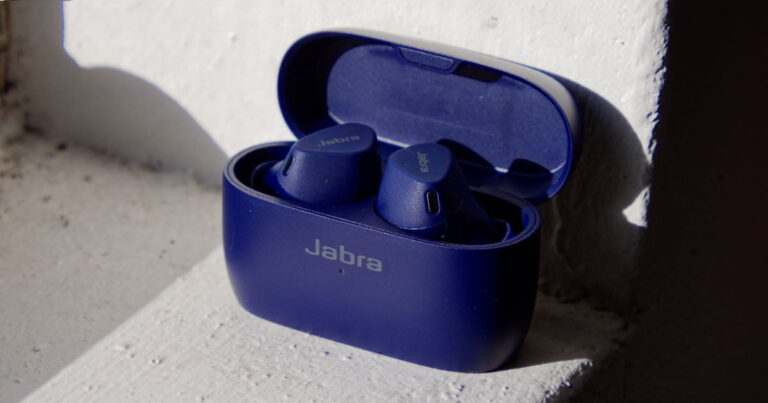 How much does Jabra Elite 4 Active cost in Australia?

A workout for your wallet

In Australia, the Jabra Elite 4 Active are priced at $179.

That's not quite the bottom of the barrel when it comes to true wireless earbuds, but it's a decent way down that direction. The Elite 4 Active are slightly cheaper than a set of Apple AirPods, but not quite as inexpensive as the Jabra Elite 3.

Depending on the retailer, you might be able to find them even cheaper. Check out the table below for a round-up

An earful of ergonomic design 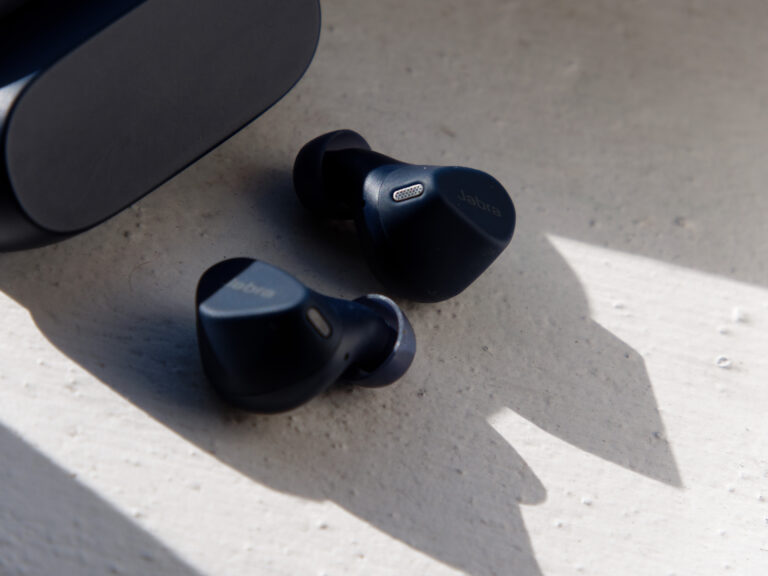 The Jabra Elite 4 Active have a surprising amount in common with the original Elite Sport. Like those earbuds, they opt for a more nubbish form factor than something with a structure provided by a stem

The Jabra Elite 4 Active are moulded to match the grooves of your ears rather than engineered to fit around them. The earbuds themselves are strikingly compact, and while they never fell out on me during a workout, they sometimes felt alarmingly loose in my ears.

While the Jabra Elite 4 Active look like they've got touch controls, they've actually got physical triggers that are seamlessly integrated into the body of each bud. While these triggers manage to avoid the usual pitfalls, they ended up being a let down in other ways. I found myself frequently stymied by the control scheme, which was more than a little unwieldy from the get-go and can't be customised using the connected app.

Still, the carry case for the Jabra Elite 4 Active is compact enough that it's easy to like. There's no physical pairing button to be found here. Just a USB Type-C port on the back used for charging.

Within Jabra's current lineup of true wireless earbuds, the Jabra Elite 4 Active sit above the budget-friendly Elite 3 but below the Jabra Elite 7 Active. That's either second-last or third place, depending on how you look at it.

However, looking at the lineup in this way obscures the fact that most of Jabra's true wireless earbuds have a lot more in common than they do apart.

All four models boast 6mm drivers, a compact wing-free form-factor and support for customisation via the Jabra Sound app (available on both iOS and Android). The Jabra Elite 4 Active also adds several features that the Elite 3 lacks, such as active noise cancellation, IP57 water resistance, in-ear pressure relief and an adjustable ambient mode.

On the other side of the equation, Jabra's middle-of-the-road earbuds lack the Jabra Elite 7 Active's adjustable ANC, "ShakeGrip" design and multi-point Bluetooth connectivity. The latter also boasts more battery life and microphones, which isn't massive but it may make them a better fit for those who want more battery life and better call quality.

The sum total of this exercise in comparison is simple. The Jabra Elite 4 Active has enough of everything to get by, but not quite enough to celebrate.

Sound quality that can't keep up with the battery life 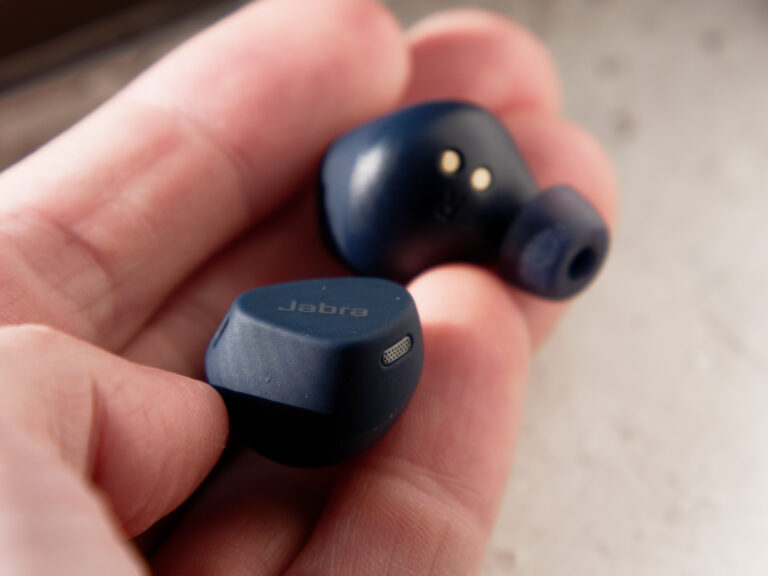 The Jabra Elite 4 Active are billed as having active noise cancelling, but I never felt quite as isolated as that back-of-the-box inclusion might suggest. Even when listening to louder music, more than a little ambient noise managed to bleed through into the mix.

Over time, I found it hard to shake the notion that an ergonomic design does most of the heavy lifting here. The results of this engineering are easy to like but all-too-oft limited.

While the Jabra Elite 4 Active do a good job of maintaining clarity amid the hustle, bustle and general chaos of my local gym, they rarely sounded particularly great. The soundscape offered up by the earbuds often felt very narrow, and a lot lighter on the bass than I'm typically used to.

As part of our earbud testing process, we put the Jabra Elite 4 Active earbuds to the test with a playlist designed to tease out the finer capabilities of the hardware. This process found that the earbuds struggled with the subtleties of the sub-bass in Childish Gambino's "3005" and had a hard time balancing out the vocals on Nina Simon's "Feeling Good" with the rest of the track.

The Jabra Elite 4 Active struggled in a similar way when it came to the usually-vibrant soundscapes of The Weeknd's "Blinding Lights" and "Comfortably Numb" by Pink Floyd. Both translated poorly here, though the Elite 4 Active fared slightly better when it came to the guitar riffs in "While My Guitar Gently Weeps" by The Beatles and the chaotic orchestrations of "Do It Again" by Steely Dan.

The quality of the microphones built into the Jabra Elite 4 Active true wireless earbuds were a little coarse in terms of quality but much more audible than some of the budget buds we've tested in the past.

The microphones on the Jabra Elite 4 Active are not quite as sharp or close to studio quality as something like the AirPods Pro, but were much clearer in action than the microphone on the Nothing Ear 1 and less blunt than the one on the Sennheiser Sport True Wireless.

Kinder words can be reserved for the Jabra Elite 4 Active's battery life. The earbuds boast 6 hours of playback per charge, with another 22 hours supplied via the charging case. In total, you're looking at 28 hours of listening time total. This isn't quite category-leading, but it is fairly competitive in the current in-ear headphone landscape.

If you're looking to choose between the Jabra Elite 4 Active and the slightly pricier Elite 7 Active, there are several differences you'll want to keep in mind.

As mentioned above, the Elite 7 Active boasts an extra two hours of battery life, multi-point Bluetooth connectivity, an extra set of microphones and a design that promises to be both lighter and more secure in your ears.

That said, the biggest difference between these two sets of Jabra earbuds is the way in which noise cancelling is manifested. While both boast active noise cancelling rather than a more passive implementation of the feature, only the more expensive Jabra Elite 7 Active offers the option of adjusting the degree of acoustic elimination on the fly.

With the Jabra Elite 4 Active, you're hoping that the noise-cancelling here can rise to the occassion. If it can't, then there's not much you can do about it. If you like the idea of having a possible plan B on that front, then the Jabra Elite 7 Active might be the better set of buds for you.

Is Jabra Elite 4 Active worth buying? 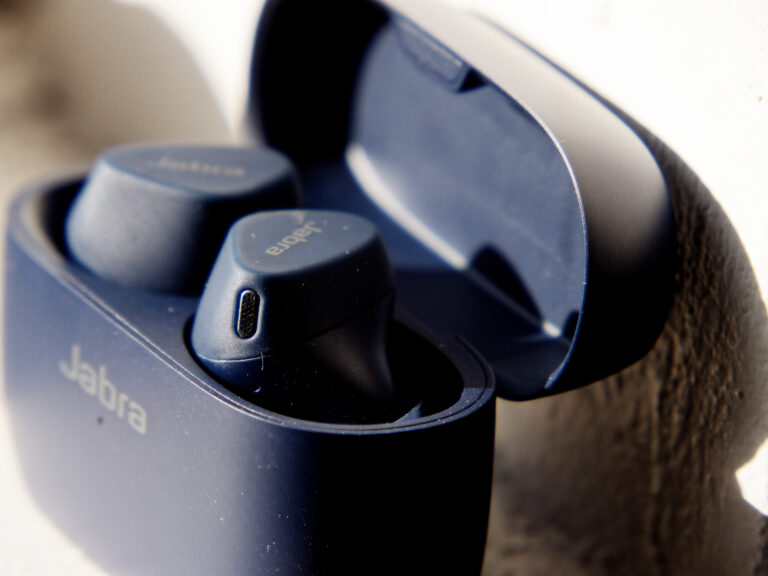 The Jabra Elite 4 Active aren't the cheapest true wireless earbuds on the audio brand's arsenal, but there's a case to be made that they are the most competitive one.

You're looking at an extra $50 on the Jabra Elite 3, but you're getting a lot closer to the capabilities of the Jabra Elite 7 Active than the difference in price might suggest. The noise-cancelling and audio quality offered by the Jabra Elite 4 Active is far from best in class, but the practical perks, durable design and plentiful battery life do a decent job of smoothing things over.

Even if they aren't perfect, the Jabra Elite 4 are a great plan B.

How does Jabra Elite 4 Active compare?