8 of the best gaming keyboards available

Insanely competitive picks outside the membrane. 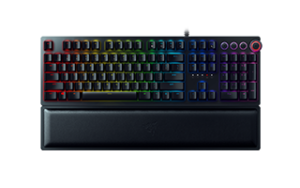 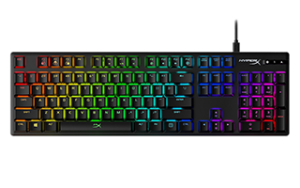 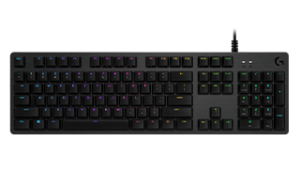 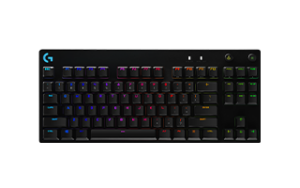 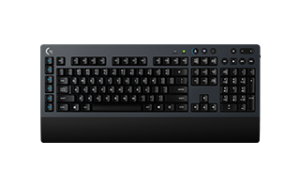 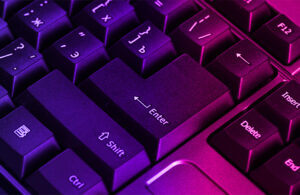 There was a time when gaming keyboards were created equal. Then mechanical keyboards loudly clacked their way into existence and the competition between manufacturers heated up.

Ultimately, if you are looking for gaming peripherals that offer measurable in-game advantages, you want to start with a great gaming mouse and a solid gaming headset before investing in a gaming keyboard.

For gaming keyboards, let’s get clacking with the list. 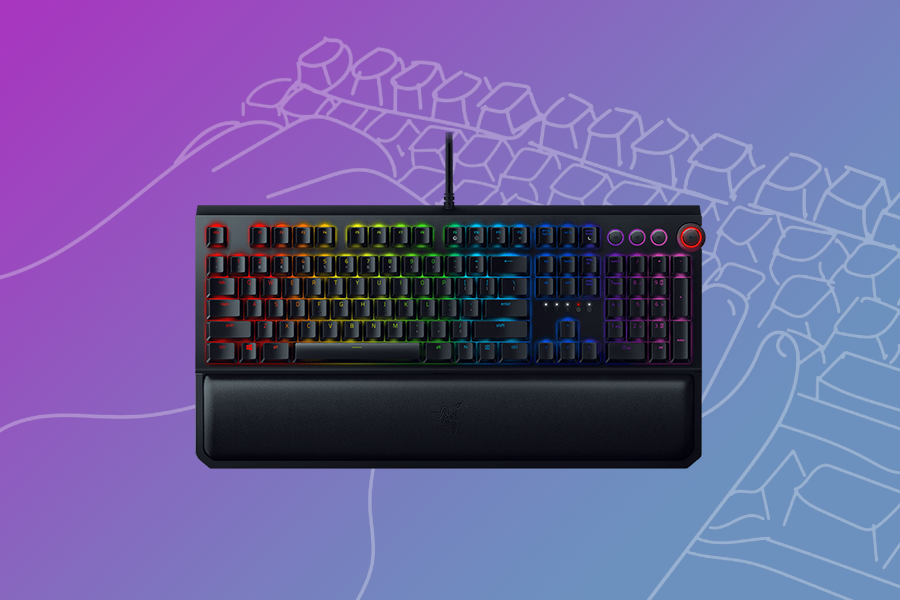 Let’s be honest, the average PC gamer is inherently lazy. This means any keyboard that’s just as great for everyday use as it is for a wide array of gaming is going to win this category. And that’s exactly what the Razer Huntsman Elite does: splices all-day work and all-night gaming sessions with excellent results and great comfort.

That comfort comes by way of a detachable wrist rest that’s a cinch to connect or remove. Despite being detachable, it’s got a firm desk grip that’s enough to be practical for even the most intensive typing or fragging session. Speaking of performance, the individual key switches on the Huntsman Elite are amazingly speedy to the point that you have to eliminate membrane-keyboard bad habits of resting your fingers on keys with any amount of pressure applied.

This learning curve may sound frustrating, but the competitive (and words-per-minute) gains are absolutely worth the retraining. The Huntsman Elite is definitely closer to enthusiast-grade ‘investment’ than ‘budget-friendly’ in terms of the cost, but it’s still worth it, unless you’re a gamer who’s big on macros (there aren’t any dedicated macro keys) and/or USB pass-through.

Take these punchy considerations into account for your next gaming keyboard purchase:

Before the Razer Huntsman Elite (above) became my gaming keyboard mainstay, the HyperX Alloy Origins was my go-to keyboard for gaming and everyday computing, in that order. What it lacks in wrist-rest ergonomics, it makes up for in some other key areas. First, the aluminium design of the keyboard chassis both feels great and provides a reliable and immovable foundation for even the most frantic gaming session or chat monologue/tirade.

Despite its full-size design and aluminium base, the Alloy Origins is a ’board that’s built to travel. It’s not as tall as most gaming keyboards, saving space by ditching macro keys and even dedicated media controls. Those are noticeable cons for fans of both, but media playback can be controlled with f-key combos. The other perk that makes the Alloy Origins a versatile traveller – or a gaming keyboard that can easily be switched out for something else – is the detachable USB-C cable.

Given the increasing prevalence of this USB standard, it means you can be AFK and charging a USB-C-capable wireless gaming mouse, smartphone, or tablet. It’s great to see HyperX shunning the stubborn trend of fixed or brand-specific attachments. The keystrokes feel glorious, too: fast, responsive, and comparatively quiet even with mechanical switches. 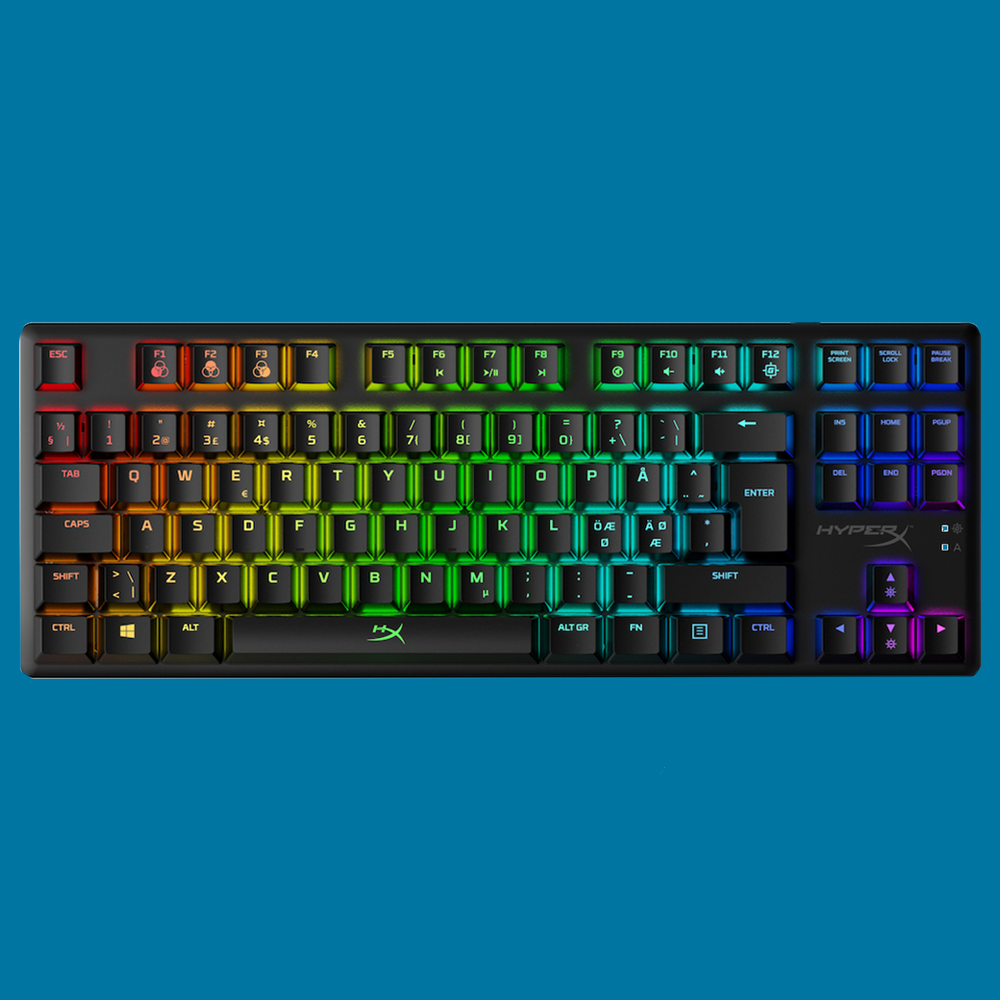 This is most definitely a keyboard that’s targeted at fans of shooters, more so than those who prefer strategy titles and RPGs. You can tell just by looking at it: despite it’s full-size presentation, it’s been pared back to preserve as much desk real estate as possible, which is important for the shooter fan who wants as much uninterrupted mousepad space as possible.

Logitech has ditched everything but the bare essentials, so you’ll have to get used to f-keys for media playback and other functionality (including macros) that might otherwise have a dedicated physical key on another multipurpose gaming keyboard. That said, the Logitech G512 is a joy to play and type on, with a tactile and audible click feedback for the GX Blue variant that lets you know exactly when your keystrokes are registers. It’s louder than some of the other options above, but not obnoxiously so.

If you’re not a fan of the click, you can opt for a GX Red (quieter) or GX Brown (springier) variant instead. Those fond of RGB lighting will find the illumination options illuminating via the easy-to-use downloadable Logitech G Hub software. Expect to see your shooter responsiveness improve with the G512, more so if you’re upgrading from a membrane keyboard. Plus, USB pass-through means you can connect compatible devices while you play. 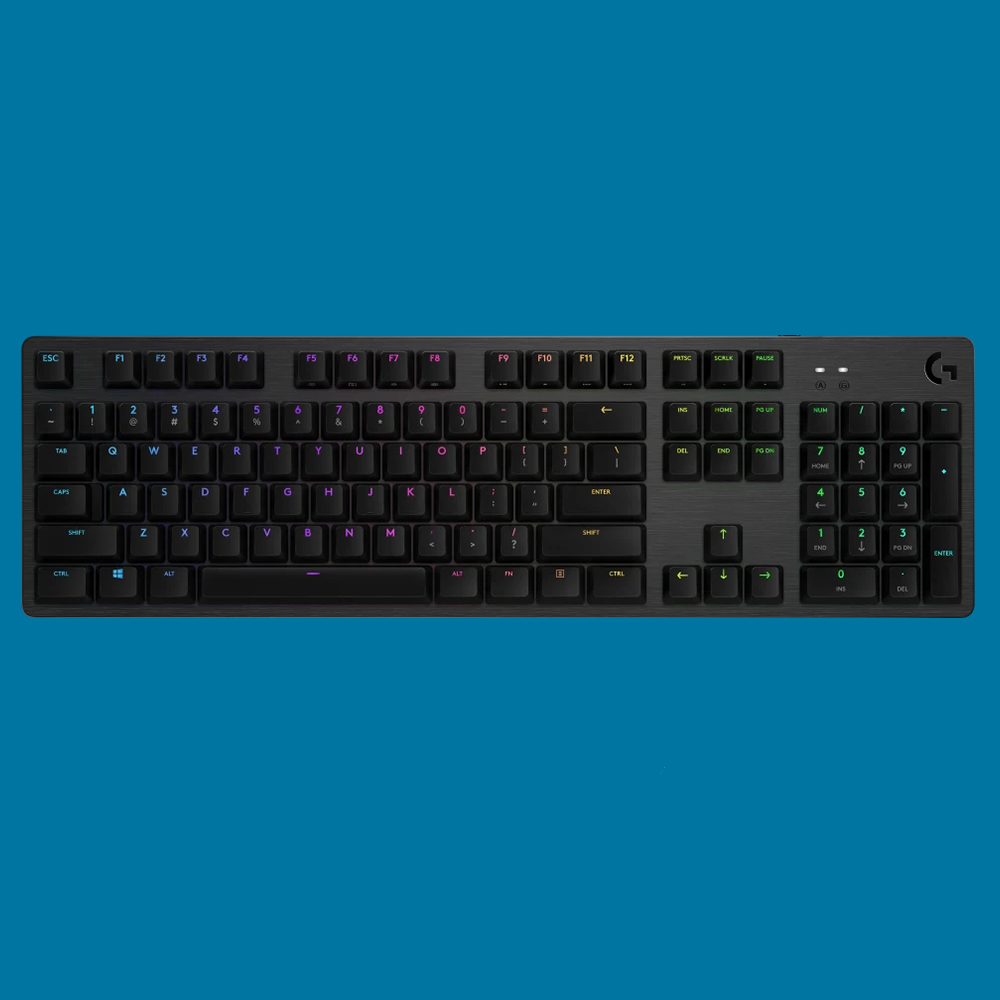 If you thought the concept of a gaming keyboard is niche, welcome to the Inception-like niche-within-a-niche otherwise known as ‘tenkeyless’ gaming keyboards. It feels superfluous to add ‘gaming’ in there because tenkeyless is built exclusively for gamers. The ditched numerical keypad brings the size and overall weight down, which results in a keyboard that’s designed to travel.

The Logitech G Pro X is our current pick of this gaming keyboard subgenre, which is light enough to be mobile, but still weighty enough to stay still while playing. Despite the size-over-function nature of tenkeyless ’boards, it’s a nice touch that Logitech has retained a dedicated win-lock key to avoid accidental game minimisation through an erroneous press of the Windows key.

Other everyday functions are relegated to f-key combos, but you’re really buying this keyboard solely for gaming and not everyday use. Logitech’s Romer G key switches are a great mix of responsiveness, reasonable keystroke pressure, and comparatively quiet, too. The best bit with the G Pro X, though, is if you don’t like the particular switches it comes with, they keys are built to pop out and you can buy (expensive) replacements that snap into place. 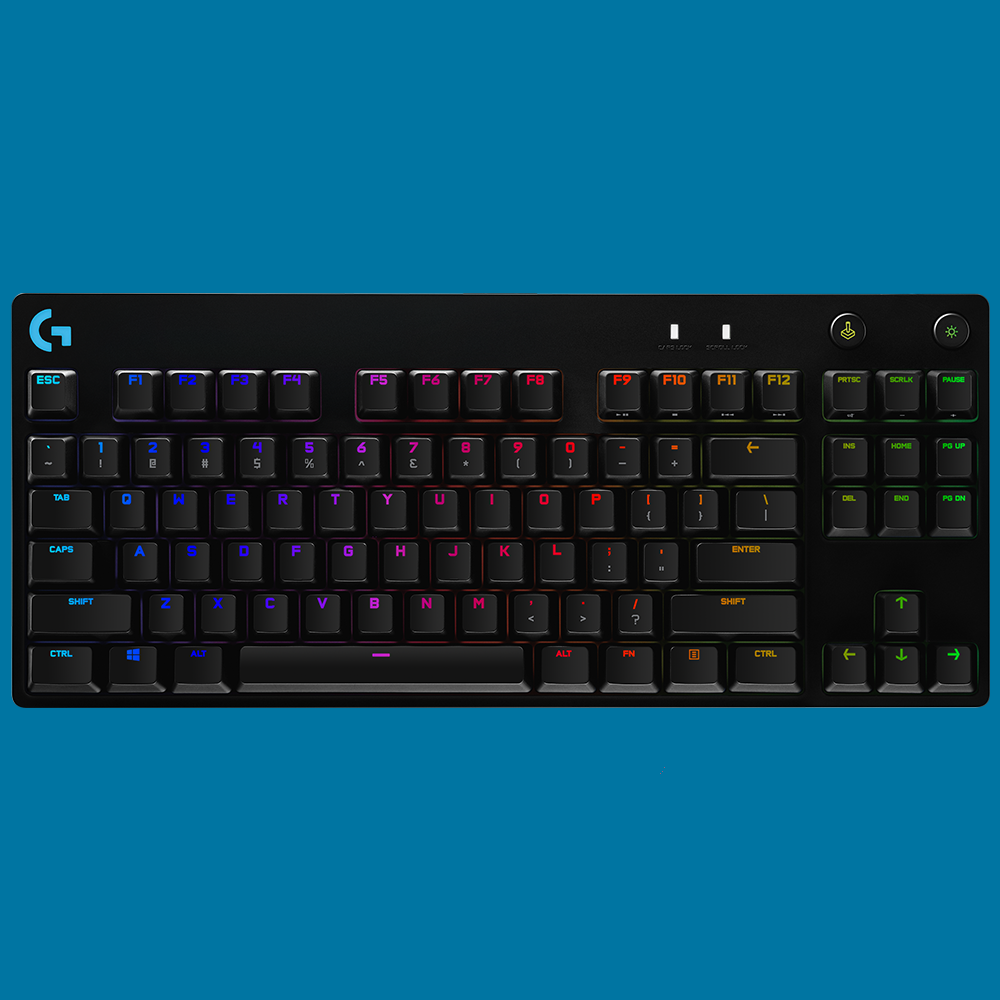 When it comes to gaming keyboards, purists will tell you that wireless is a bad thing. After all, any technology that inherently adds latency – even the kind that’s measured in tricky-to-notice milliseconds – is a bad thing, right? Not necessarily. Gaming mice have annihilated the wireless-vs-wired debate in recent years, and manufacturers are finally bringing this battle to the keyboard frontline.

Case in point, the Logitech G613. It’s an oldie but a goodie, and the first wireless mechanical keyboard where ‘mechanical’ means it’s aimed at gamers. The G13 is a bit bulky with what feels like some wasted space, but the inbuilt wrist rest is comfortable, and the overall size doesn’t feel unwieldly whether you’ve got it on a desk, a table, or balanced on your lap.

Logitech has clearly built this with a mix of gaming and everyday use in mind, so you can take advantage of the dedicated media playback buttons for the former, then have the versatility of six left-keyboard macro keys and a dedicated win-lock key. The battery life you get from two AAs is massive, while being able to connect to multiple devices (via Bluetooth) makes for a versatile keyboard.

Meanwhile, the Romer-G keys are a great mix between quietness and performance. Logitech’s Lightspeed Wireless technology tops it all off – the same kind used in its responsive wireless gaming mice – for 1ms report rate when using the USB receiver for a wireless gaming keyboard that performs as though it’s wired. 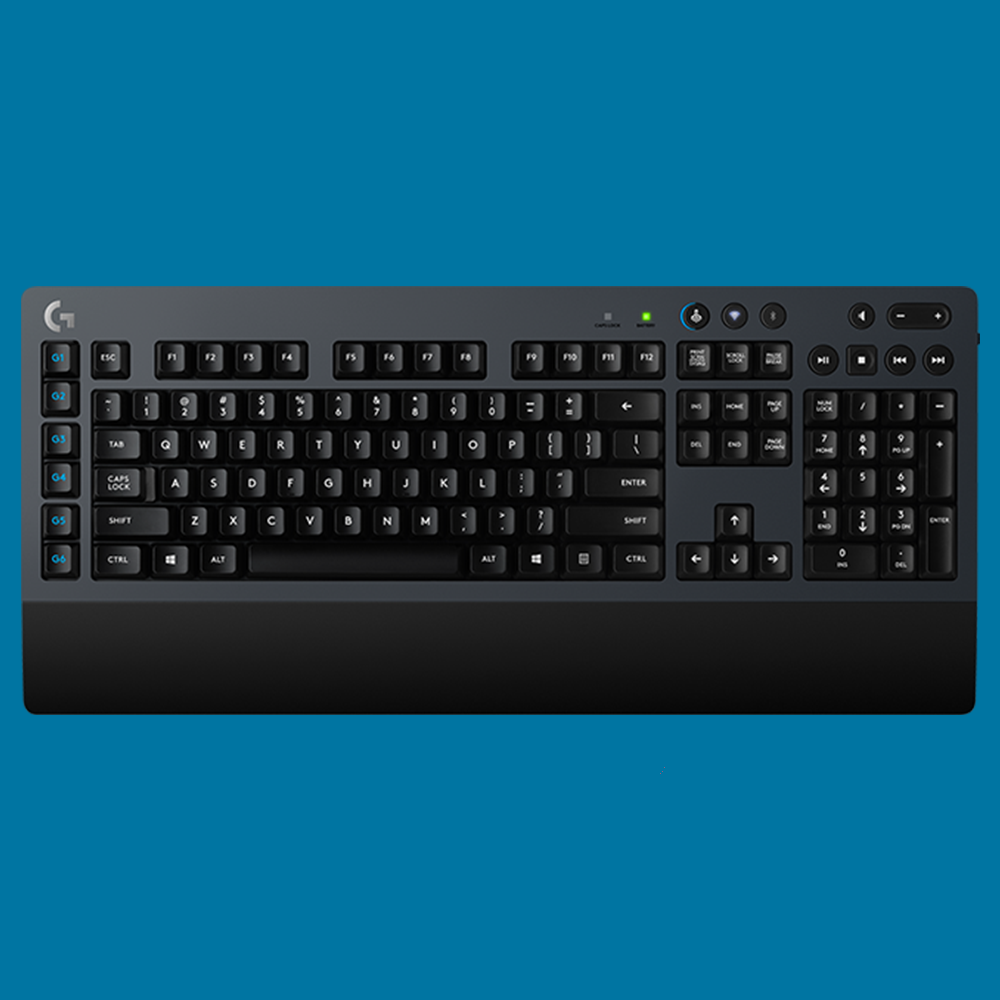 If you want the perks of a gaming keyboard but want to save pennies, entry-level options like the Razer Cynosa Chroma are worth a look, albeit expect to be working with a membrane keyboard at the sub-$100 price point. For an entry-level gaming keyboard, invest a bit more for a Tesoro Excalibur. Even the entry-level model has admirable results, more so if it’s your first mechanical keyboard.

For something a littler wackier that’s specifically built for hardcore gamers, the Razer Tartus Pro is a gaming keypad with 30 programmable optical-switch keys, where the side-mounted joystick means you can easily free up four fingers for inputs and keep your thumb for controlling in-game movement. There’s a learning curve, but the benefits are worth it.