Both are great streaming devices but which is the best?

The Chromecast with Google TV and Apple TV 4K are naturally two of the most popular streaming devices you can buy.

The Chromecast with Google TV is the best streaming device for both Android and iOS users, but the Apple TV 4K is a better set-top box if you’re eternally bound to the Apple ecosystem.

While there are solid alternatives out there, like the 4K-upscaling Nvidia TV Shield Pro, there’s no denying Apple TV and Google Chromecast are your best two options for the most comprehensive range of streaming apps.

But out of the two, which is the best option these days? Does it matter if you’re an iPhone or Android user? Let’s stack the Apple TV 4K up against the Chromecast with Google TV and see which comes out on top. 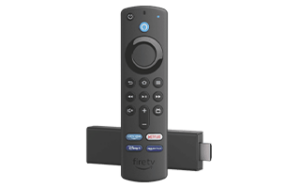 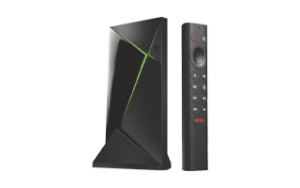 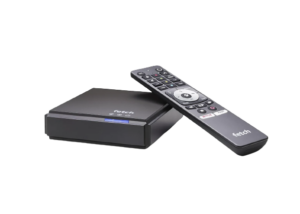 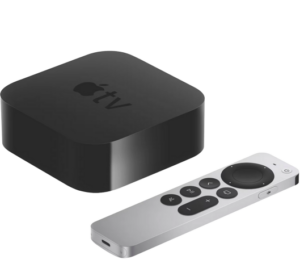 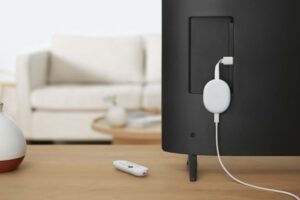 No smart TV? No problem

We're currently living in a golden era of streaming services and devices. Let's find out which avenue is right for you.
Find the best streaming devices

Our first round - and it’s a biggie - is price. It’s not even close.

The Chromecast with Google TV 4K will cost you a cool $99 whereas the Apple TV 4K is, well… Apple-priced. The latest Apple TV 4K is more affordable at $219 for a 64GB model, but it's still a lot more expensive than Google's top streaming device.

Even the Siri Remote on its own (for those with older Apple TV models) will cost you $79, which itself is just a little cheaper than the Chromecast with Google TV.

Chromecast devices also have a solid track record for selling at a steal around the holiday season and if you want to go even cheaper, a Chromecast with Google TV HD will cost you just $59 at full price. 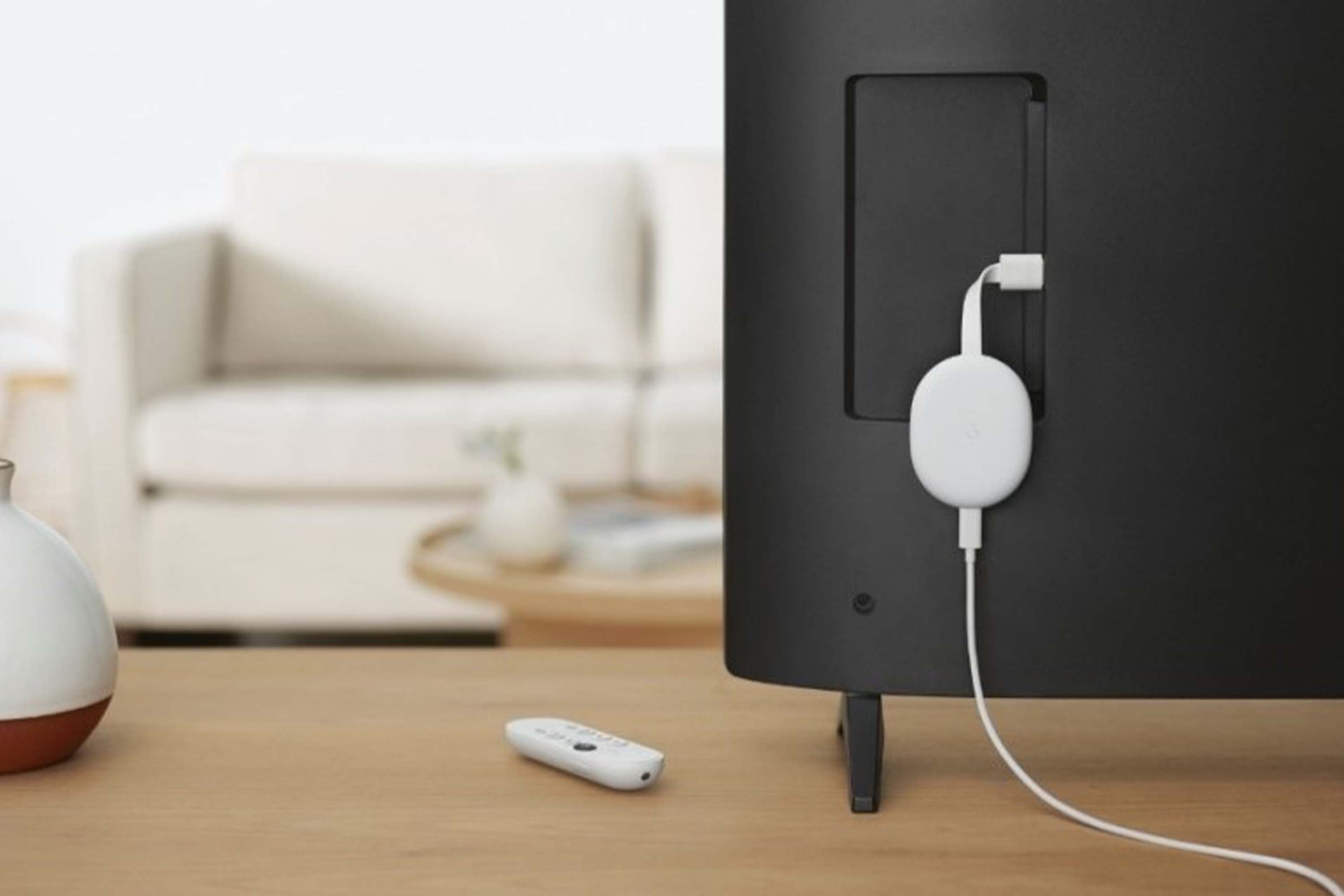 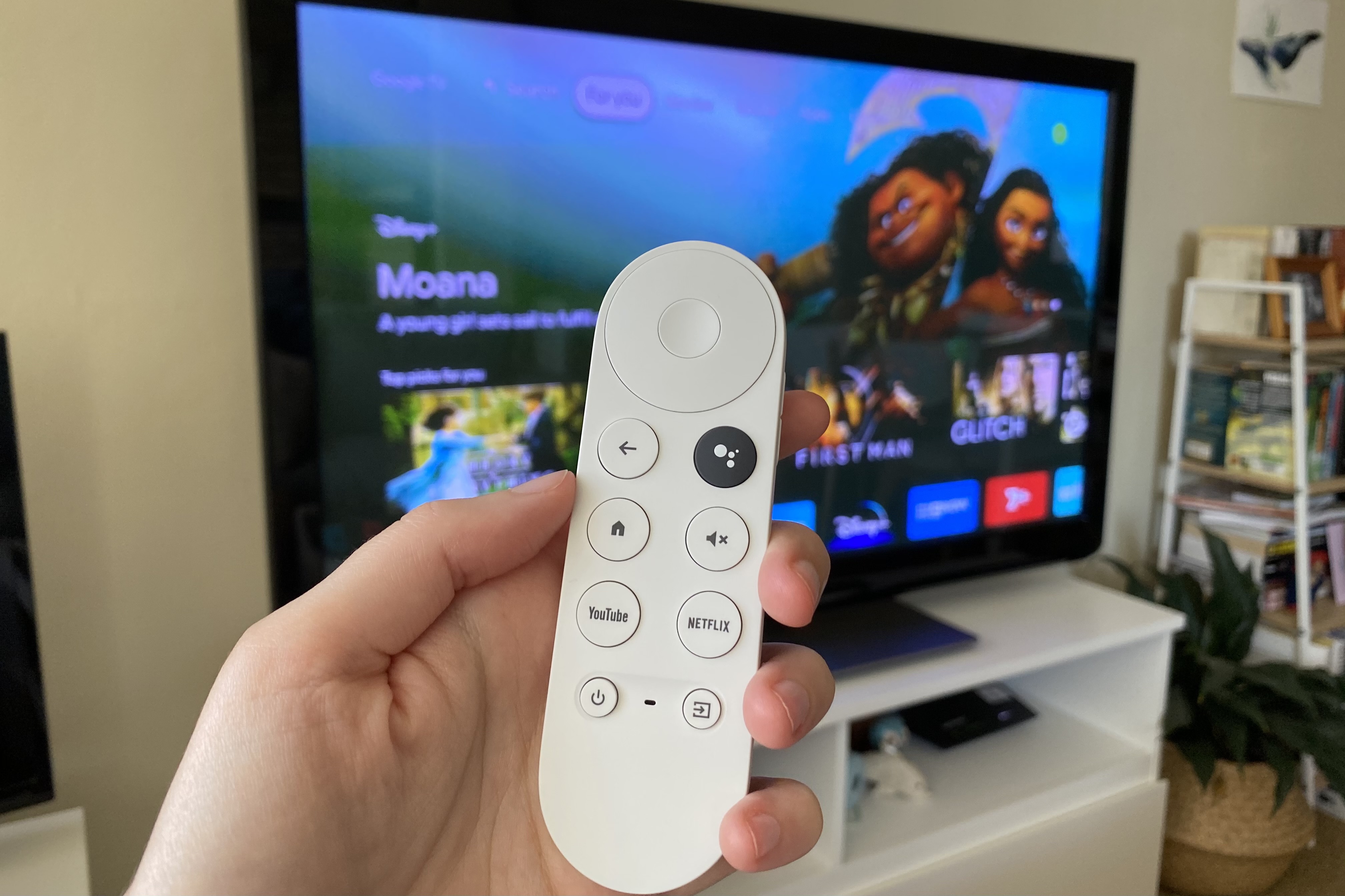 Don’t let the Chromecast with Google TV’s price tag fool you, you’re not losing anything in the way of video quality by opting for the cheaper device. Both devices offer the latest in streaming tech: 4K HDR video up to 60fps with support for Dolby Vision, Dolby Atmos and HDMI 2.1.

With that said, the Chromecast with Google TV (4K) just boots up and expects you to trust that it’s taking advantage of those features.

The Apple TV 4K actually holds your hand through the setup and sports a few user-friendly features that make setup and optimisation a breeze for the home theatre layman.

The Apple TV 4K’s settings let you view video quality information, test HDMI connections and use Apple’s fancy Colour Balance feature —a neat tool that uses your iPhone's camera to calibrate the Apple TV’s colour profile to best suit your TV’s display. It basically removes all the guesswork and lets you make the most out of your Apple TV 4K and television. 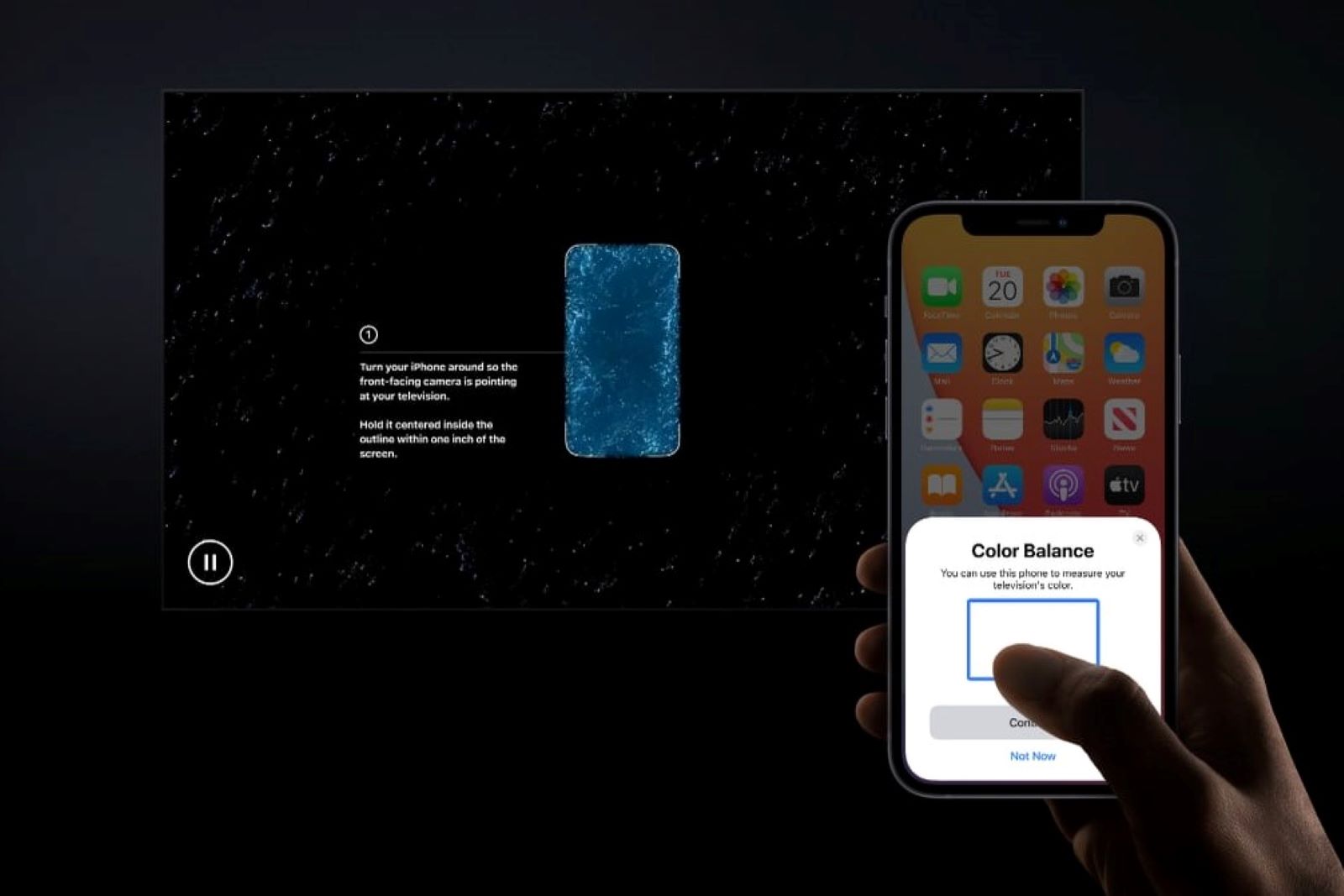 Despite costing $79 if you purchase it separately, Apple’s Siri Remote control is a great upgrade. The new touch-enabled click wheel adds a welcome tactile feel, opposed to the old remote's glass touch panel, and it’s a little heftier, meaning it should be (hopefully) a bit harder to lose.

The Chromecast with Google TV remote control is perfectly capable too. Feature-wise, it does just about everything the Siri remote does, including voice control via Google Assistant. But it feels a little cheap and having to replace AAA batteries is a bit of a chore.

The Siri Remote, on the other hand, is charged via a USB-C cable, just like most iPads. 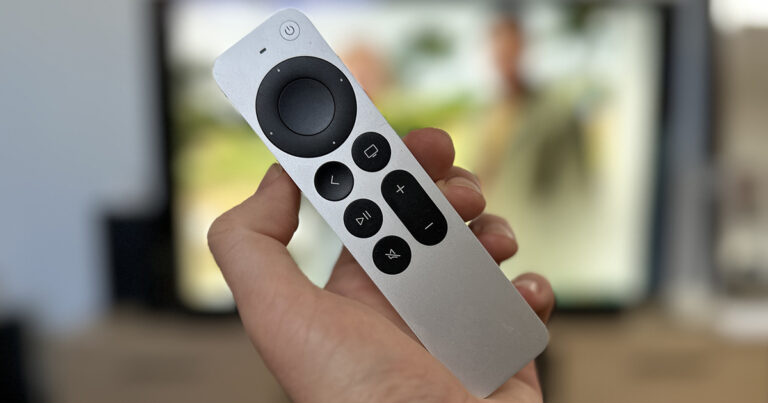 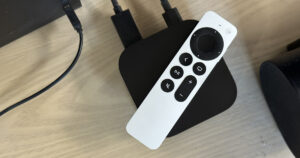 A price cut and a speed bump

Both devices offer unparalleled access to every major streaming service available in Australia. That’s what makes them the best. While some streaming services will weigh up the worth of maintaining support for an Xbox or Wii U app, you can always count on ongoing support for Apple TV and Chromecast, if not through a native app then via AirPlay and Casting from the mobile apps at the very least.

And now that the Apple TV+ app is available on Chromecast with Google TV, your options are more flexible than ever.

So for native streaming app support, it’s a tie. With that said, AirPlay and Chromecast aren’t quite as harmonious. Chromecast support is simply more widespread whereas AirPlay is unique to Apple devices.

Your iPhone can cast to Chromecast but your Android can’t AirPlay to Apple TV 4K.

You also can’t Chromecast Apple TV+ content or anything purchased through iTunes from an Apple iPhone, despite the ability to stream Apple TV+ natively on Chromecast with Google TV. It’s an odd restriction that feels like a relic of Apple’s airtight ecosystem.

There is one extra benefit for select Apple users on Apple TV 4K - Spatial Audio.

If you invested in a pair of AirPods Max or AirPods Pro, you can able to use the jaw-dropping Spatial Audio feature. Essentially, Spatial Audio is a levelled-up version of immersive 360-degree audio tech. It's an in-ear surround experience with one key difference: Apple's Spatial Audio technology locks the position of the audio to the screen or device you're watching on. If you turn your head while wearing AirPods, voices will still sound like they are coming from the TV's position.

If there's a sound off-screen to the left, turning your head left will make it sound like the sound is directly in front of you (whereas typical 360-degree audio would continue to play the sound through the left ear).

It's hard to explain with words just how effective it is at fully immersing you within the world of the TV show or movie you're watching but it's definitely worth experiencing for yourself.

It's also worth noting that the Apple TV 4K comes with 64GB or 128GB internal storage, depending on the model you choose. This could be especially helpful if you're downloading games from Apple Arcade. The Chromecast with Google TV has a paltry 8GB, which won't get you far.

Chromecast with Google TV does have games but the selection is pretty obscure and the one game we did try to play—Aliens Pinball—crashed at start-up.

Not only does the Apple TV support a long list of App Store and Apple Arcade games but your save data and progress are stored in the Game Centre so you can start a game of NBA 2K21 on your iPhone and pick up where you left off on your Apple TV. Plus, you can use your PlayStation 5 or Xbox Series S/Series X controller to play those games on the Apple TV 4K.

Apple Arcade has some seriously solid games that play well on smartphones and tablets and transition nicely to the big screen. 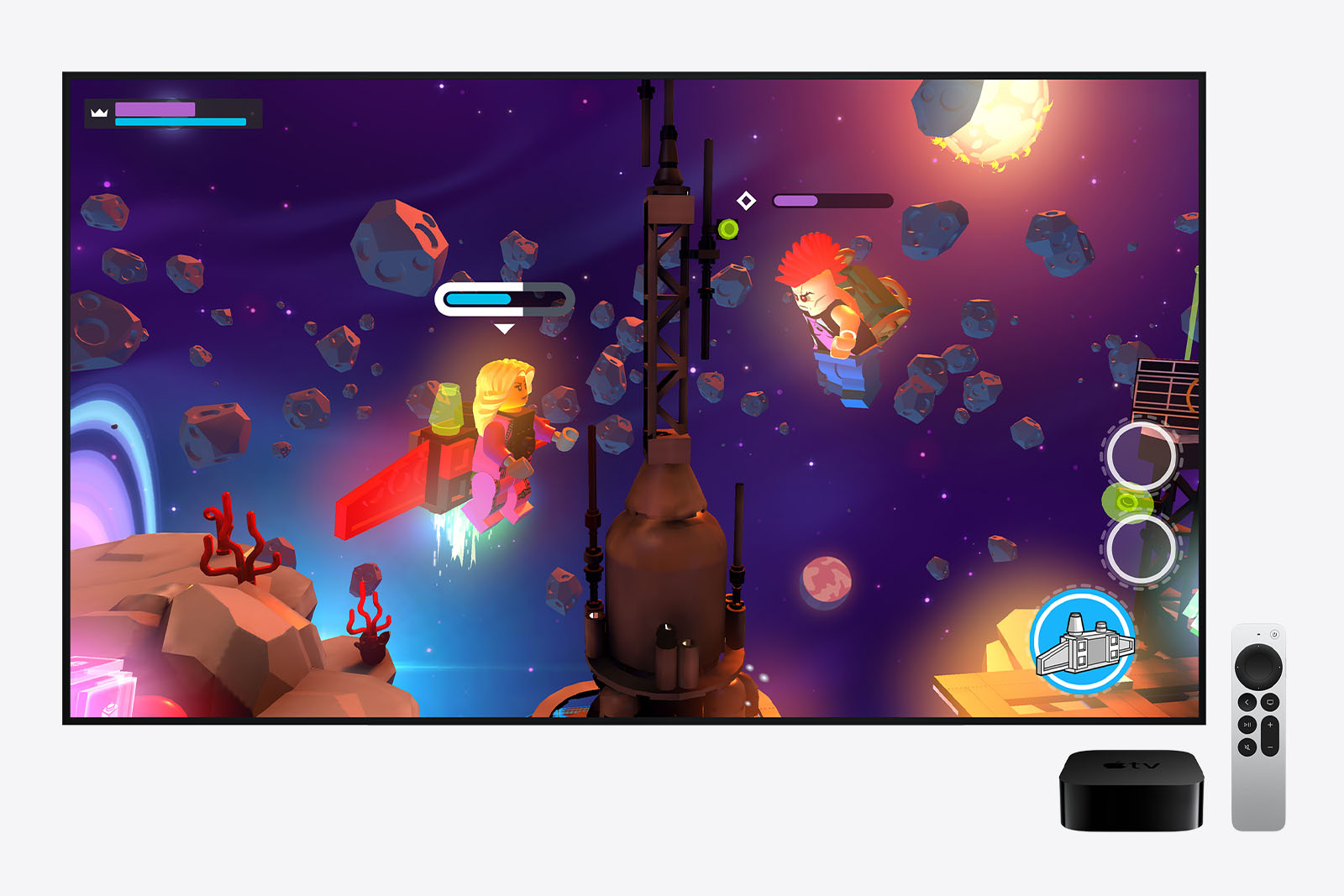 Now that we've explained the biggest differences between the Chromecast with Google TV and the Apple TV 4K, let's recap by comparing the two technical specs of the two devices side-by-side.

The new Apple TV 4K is powered by the A15 Bionic processor - the same chip you'll find in the standard iPhone 14 - making it insanely fast. It's the most responsive streaming device we've tested. On the other hand, the Chromecast with Google TV can feel a little sluggish. Waiting a few extra seconds for a streaming app to open isn't a big deal, however.

One thing we haven't touched on yet is the Apple TV 4K's superior WiFi technology (WiFi 6) and Gigabit Ethernet port (on the 128GB model). Those two inclusions could make a big difference for people with superfast broadband or those who prefer a wired connection.

The 128GB model also has Thread connectivity, for those hoping to use it as a smart home hub.

Overall: Which is the better choice for most?

Forgive me Tim Cook, but I simply can’t resist the Chromecast’s price tag. It’s the most versatile and accessible streaming device available for both Android and iPhone users.

With that said, I’ve also tasted the forbidden fruit and it was delicious. The decadent Apple TV 4K comes at an unholy price but it’s the best premium set-top box for people who have completely converted to the Apple ecosystem.

There are a few reasons Apple users, specifically, would spend more on the Apple TV 4K. If you want to make the most of Apple's stable of premium services, the ability to play Apple Arcade games on the big screen is a huge bonus, and so is the inclusion of Spatial Audio for Apple AirPods Pro and AirPods Max owners. It's also hard to argue with the seamlessly fast performance.

But if you're simply an iPhone user and not too entrenched in the ecosystem, the Chromecast with Google TV is a great value choice.

For more options, check out our complete list of the best streaming devices available in Australia.