The Synology RT6600ax is an incredibly versatile and future-proofed router. 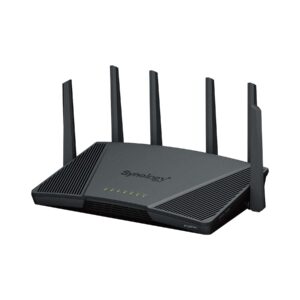 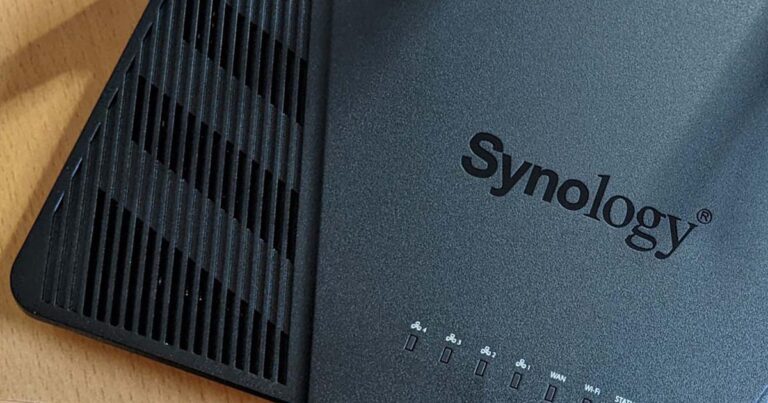 It’s hard to get excited about NBN-compatible routers, particularly when it comes to how they look. The often-black networking boxes tend to be an eyesore and offer comparable features. But while the Synology RT6600ax most certainly looks like a router, it’s the future-proofed power and incredible versatility that make it such an impressive contender in the router space.

The Synology RT6600ax retails for $599, which is expensive in router terms and about as pricey as mesh systems. The pricing is around high-end gaming routers but it’s still very much costlier than mid-tier WiFi 6 routers (up to $350-ish) that will suit most homes. That said, the RT6600ax has the features and future-proofing to justify the steep price.

Please note the original RRP provided at the time of review was $461 but that has since been raised to $599 because of "unexpectedly high shipping costs".

Not a preconfigured plug-and-play router. 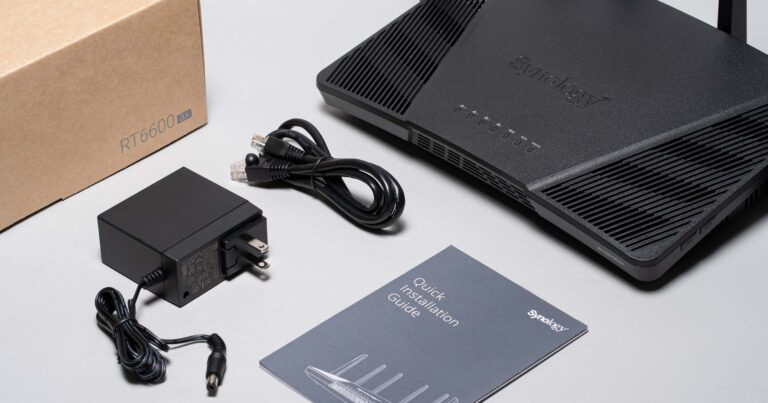 The Synology RT6600ax isn’t one of those preconfigured NBN provider-sent routers that’s plug and play, but the hardware setup and network configuration steps are incredibly straightforward. Download the Synology DS router app for Android or iOS before you disconnect your old router, unless you don’t mind using a bit of mobile data to get the app during installation.

Apart from that, the hardware setup steps are incredibly straightforward. Where other routers ask you to unbox separated antennas then screw them in and position them, Synology simply asks you to fold out the six already-connected antennas to a 90-degree angle. From there, link the included power cable between wall outlet and router, then the Ethernet cable from NBN connection box to the blue ‘WAN 1’ port.

Push in the power switch on the Synology RT6600ax router, then wait a minute or so for it to start up. Use the default WiFi password from the quick-installation guide on an iOS or Android device for the easiest guided installation.

What is Synology?
Over the years, Synology has made a name for itself as a provider of quality network-attached storage (NAS) products. The company was founded in 2000, and while it still mainly sells NAS products, it’s also branched out into the router space, including the Synology RT2600ac, MR2200ac and, most recently, the Synology RT6600ax.

A showcase for WiFi 6 speeds. 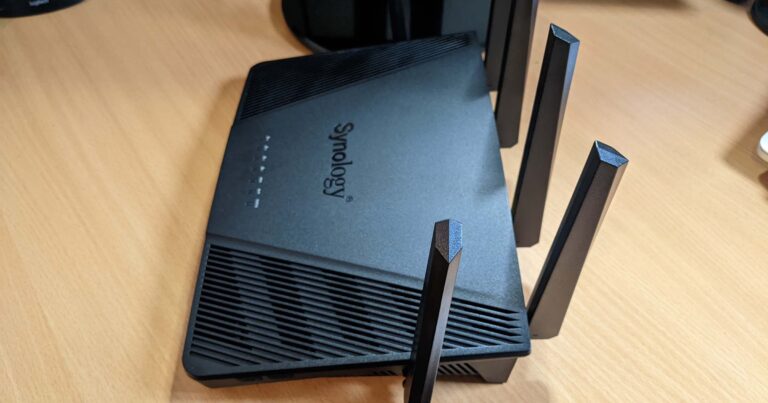 The Synology RT6600ax is a very speedy performer, as you’d expect from a WiFi 6 router with six antennas. For my comparison tests, I used my ageing but faithful Netgear Nighthawk Pro Gaming XR700, which is a WiFi 5 router. In fairness, the only reason I’m using the XR700 instead of the newer, speedier Nighthawk XR1000 is the XR700 has six Ethernet ports compared to the XR1000’s four (the RT6600ax also has four Ethernet ports for devices).

So while these speed-test results aren’t the same as pitting two WiFi 6 routers against each other, they are indicative of what you can expect when shifting from WiFi 5 to WiFi 6 (assuming you have compatible WiFi 6 devices to benefit from the performance boost). Using a Superloop NBN 100/40 plan during the busy evening hours via FTTC, I got the results below with the Nighthawk XR700. Note that lower numbers for latency, jitter (delay in sending data packets) and packet loss (data packets fail to send) are best, while higher numbers for download and upload indicate better performance.

And below is how the Synology RT6600ax performed in tests with the same Google Pixel 5 smartphone for WiFi 6 testing and desktop PC for the single Ethernet baseline speed test (with a gigabit Ethernet cable).

As you’d expect from a newer WiFi router with WiFi 6 and two more antennas, the Synology RT6600ax enjoys an almost comprehensive win over the XR700. Latency differences are negligible, but there were only two instances of speed decreases in the speed tests for the RT6600ax, with a bunch of results offering beyond-100% speed boosts.

My apartment isn’t massive, but it’s great for testing the strength and object-penetrating power of WiFi gear because of thick walls. The lounge and TV results are in the same room as the router (though the TV has a thick base, which likely blocks some signal for the “TV” tests), but every other room in my apartment has at least one thick wall between it and the router. The spare room, bathroom, kitchen and laundry have two thick walls (though the kitchen and laundry are closer to the router), while the bedroom has one but is also at the opposite end of the apartment from the router (also true of the bathroom and spare room tests).

Bottom line: the Synology RT6600ax offers a powerful WiFi signal, even for homes with thick walls. 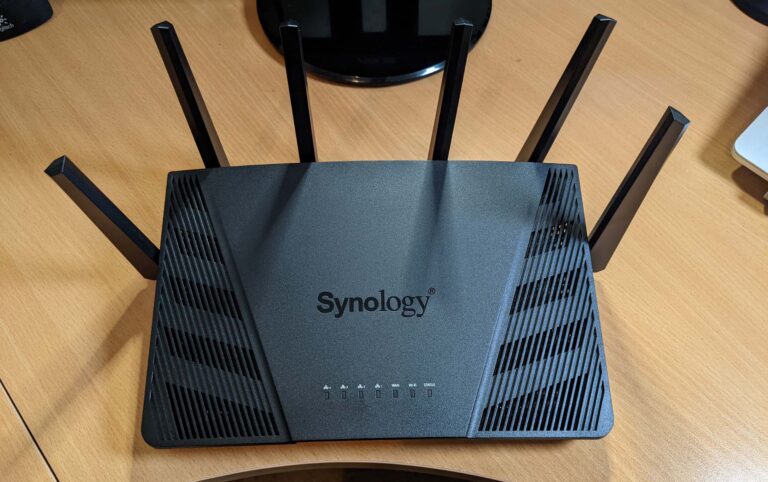 The Synology RT6600ax has hardware-expansion potential. If you have a large home, or walls thicker than the ones in my apartment, you can purchase multiple Synology RT6600ax routers and interlink them to create a mesh WiFi system. While very expensive at launch prices, it’s a great option for full-home blistering speeds, particularly if you want to upgrade down the track with hopefully cheaper pricing.

There’s also a single USB 3.0 port on the back, which has two functions. It can be used as a tethering port with an iOS or Android phone, which is a great internet backup option in the event of a power outage (though keep a close eye on mobile data usage). The other function that I appreciated was connecting an external hard drive and effectively adding NAS functionality to the Synology RT6600ax.

For my tests, I used a USB 3.0 external drive, and it offered up to 113MBps (note: megabytes, not megabits) transfer speeds with a couple of clicks. I did have to disable a 2.4GHz anti-interference feature for those speeds, which still gave me a warning about USB 2.0 speeds even after I’d disabled it, but otherwise activating it was a few clicks in the Synology Router Management (SRM) operating system.

I was able to transfer a 15GB file in two minutes and 17 seconds, and the only hiccup was minor input latency for internet-connected things like Office 365 and the browser address bar. It’s not ideal for such a slowdown during full-speed NAS transfers, but it’s something I hope will be ironed out in the future. The WiFi transfer test of the same file was understandably slower, though, measuring in at around 35MBps and taking six minutes and 57 seconds to complete.

The only other quirk of the SRM operating system I didn’t like was an occasional warning that Ethernet speeds were 100Mbps instead of the 1Gbps they should be registering at. In fairness, one of the LAN LED indicators on the Synology RT6600ax suggests I’m using one older Ethernet cable, but that wasn’t connected to a device I was using for testing. It’d be more helpful if SRM identified whether it was all devices being impacted or a particular device/LAN port because this apparent 100Mbps Ethernet speed limitation wasn’t reflected in my tests.

Outside of that, SRM is an easy-to-use and highly expandable operating system that encourages tinkering. I really appreciate that Synology has been internally inspired by its NAS operating systems for a logical layout that makes personalising incredibly straightforward. If you do anything wrong, you can always reset via the pin port on the back of the router, which I had to do when the Synology RT6600ax didn’t like my attempts to change its default IP address.

Synology RT6600ax worth it? 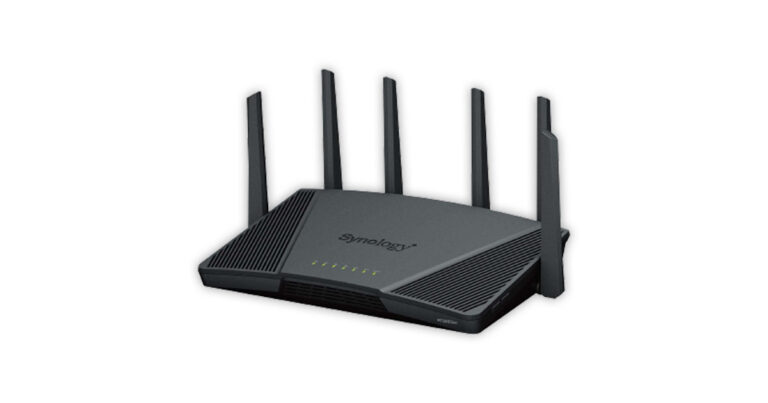 If you don’t mind treating a router as an investment, the Synology RT6600ax is absolutely worth the admittedly steep asking price. While admittedly expensive, with only minor quibbles holding it back—some of which will hopefully be addressed in future firmware updates—the Synology RT6600ax is a future-proofed router that’s easy to use and has plenty of versatility for those who like to tinker.

How we review routers

We test our routers in ways that are meaningful to everyday users. That starts with looking at where the price of a router falls in comparison to its peers, relative to the features it offers. Then comes the setup, evaluated in terms of hardware installation and initial configuration to get connected.

We like a router that’s easy to install, simple to configure and one that’s easy to tinker with for users who like to personalise settings inside a router’s operating system. Ultimately, though, a router has to offer a speedy and reliable network—mainly for preserving internet speeds but also for local transfers—which is why we pay close attention to the results of our speed tests.

From there, we test a router as an everyday device. While high-end, future-proofed bells and whistles are great, we like routers that reliably work in the background to make it easy to browse the web, play games, share files locally and, ideally, offer wide-reaching WiFi networks.

Here are the most frequently asked questions about Synology.
Synology absolutely still makes routers, which is how this review was able to happen care of a pre-release product sample from Synology. Today’s Synology router has a familiar operating system to anyone who’s used a Synology NAS.
The Synology RT6600ax has impressive security features. Easily configure network settings across multiple wireless networks and network types with or without parental and traffic controls within the Synology RT6600ax’s operating system.
Either follow the quick-installation guide or download the DS router app (for iOS or Android), which offers guided steps. If you follow these steps, it should only take a few minutes to get online.