You’ll pay a premium price for it, but the Netgear Nighthawk XR1000 is a solid router. 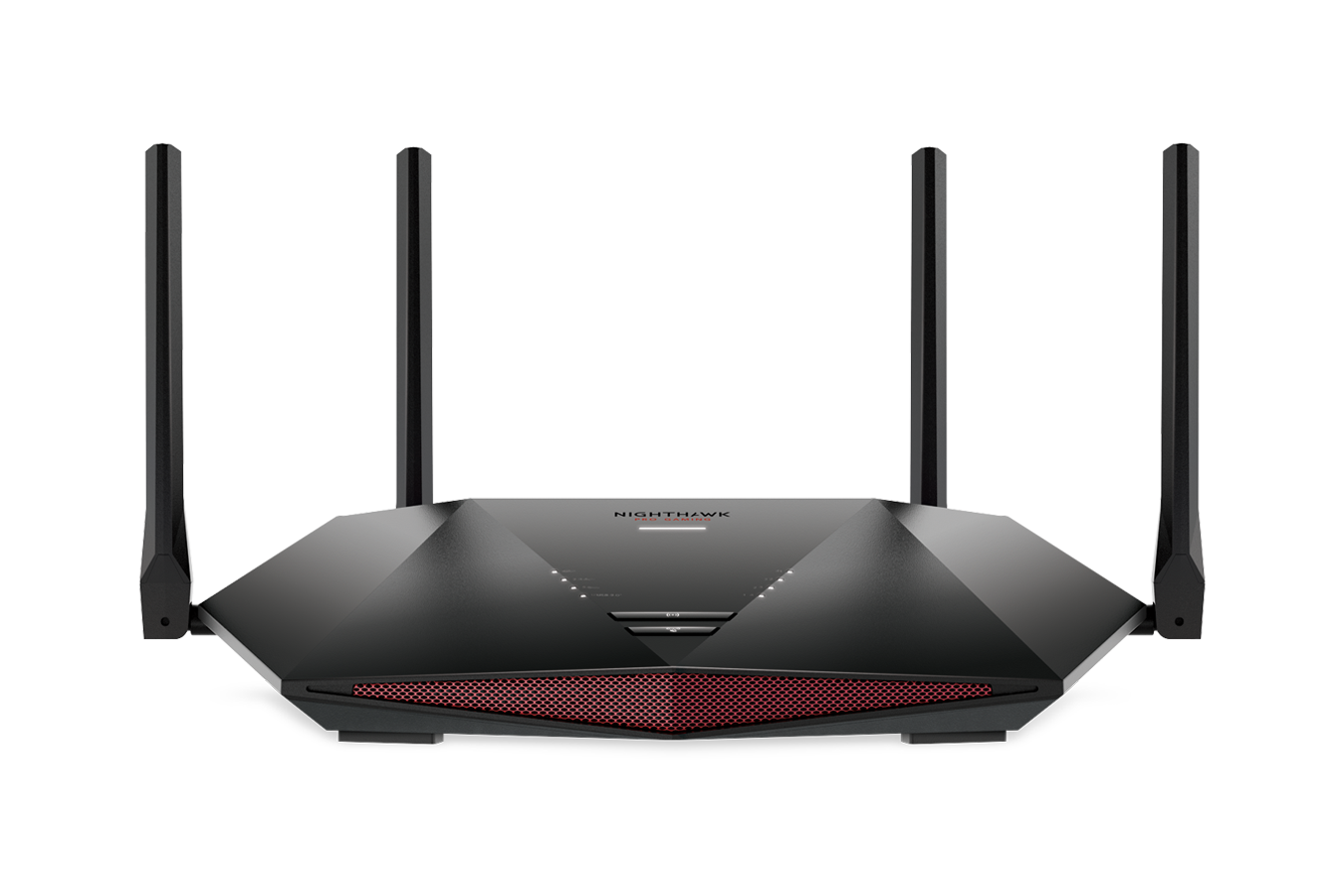 Despite having a ‘gaming router’ moniker, the Netgear Nighthawk XR1000 is an incredibly user-friendly router. Use Netgear’s Nighthawk app to give step-by-step guidance for configuration and rely on the app for basic interactions. Alternatively, dig deeper into a vast DumaOS 3.0 router interface if you fancy. The XR1000 is mainly held back from full marks because of the price you pay for some missing ports.

Data effective 1/3/2021. Offers and availability vary by location and are subject to change.

It’s not just that homes are anticipated to be stuffed with connected devices at an ever-increasing rate, it’s also that their smooth operation is dependent on the right networking gear. Cue the entry of WiFi 6, which isn’t just speedier than its predecessors, it’s also better at handling more simultaneous connections.

WiFi 6 is a great way to free up wires in your home, while still not compromising on speed, latency and overall reliability. And this is exactly where the Netgear Nighthawk XR1000 steps in – an upgrade to the not-so-old XR500 – to tempt gamers, particularly, into a router upgrade. But there are perks that even non-gamers should appreciate. 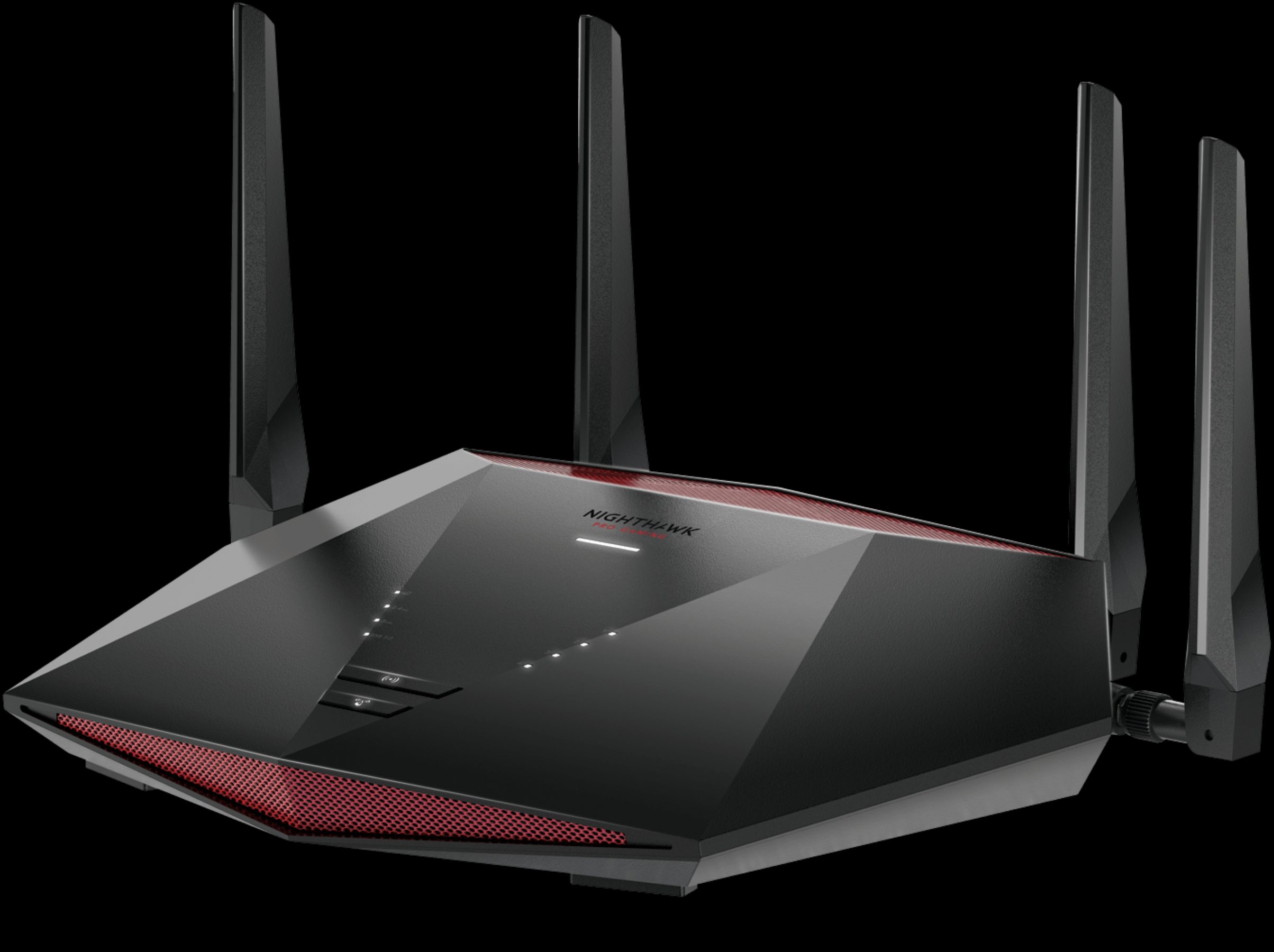 Everything you need to get online

The Netgear Nighthawk XR1000 comes well-packaged and it’s also incredibly easy to get to everything you need. You’ll find the XR1000 in the middle, with separate sections for the power adapter, detachable antennas, an Ethernet cable and the quick-start guide. You need to screw in the four antennas, but don’t plug anything else in just yet.

If you prefer a digital copy, you can find the XR1000 user manual here and the XR1000 installation guide here.

Step-by-step guidance from the Nighthawk app

This is one of the easiest routers I’ve ever had the pleasure of installing outside of a few initial niggles. I’m old school, so I’m used to inputting router connectivity information manually. If I’m lucky, the router will automatically detect my internet connection, so I don’t have to stuff around with that part before tweaking other settings. As long as you have Netgear’s Nighthawk app installed on your smartphone before you switch routers, the XR1000’s setup is a breeze.

There aren’t any trick steps here; just follow the prompts. You’ll need to power cycle your modem before connecting the Ethernet cable to your XR1000 and powering it on, but initial connection only took around 10 minutes. Additional configuration was a few minutes more (there was a firmware update), but it only took around 15 minutes to have my internet and main local wireless network details seamlessly switched over and ready to use. 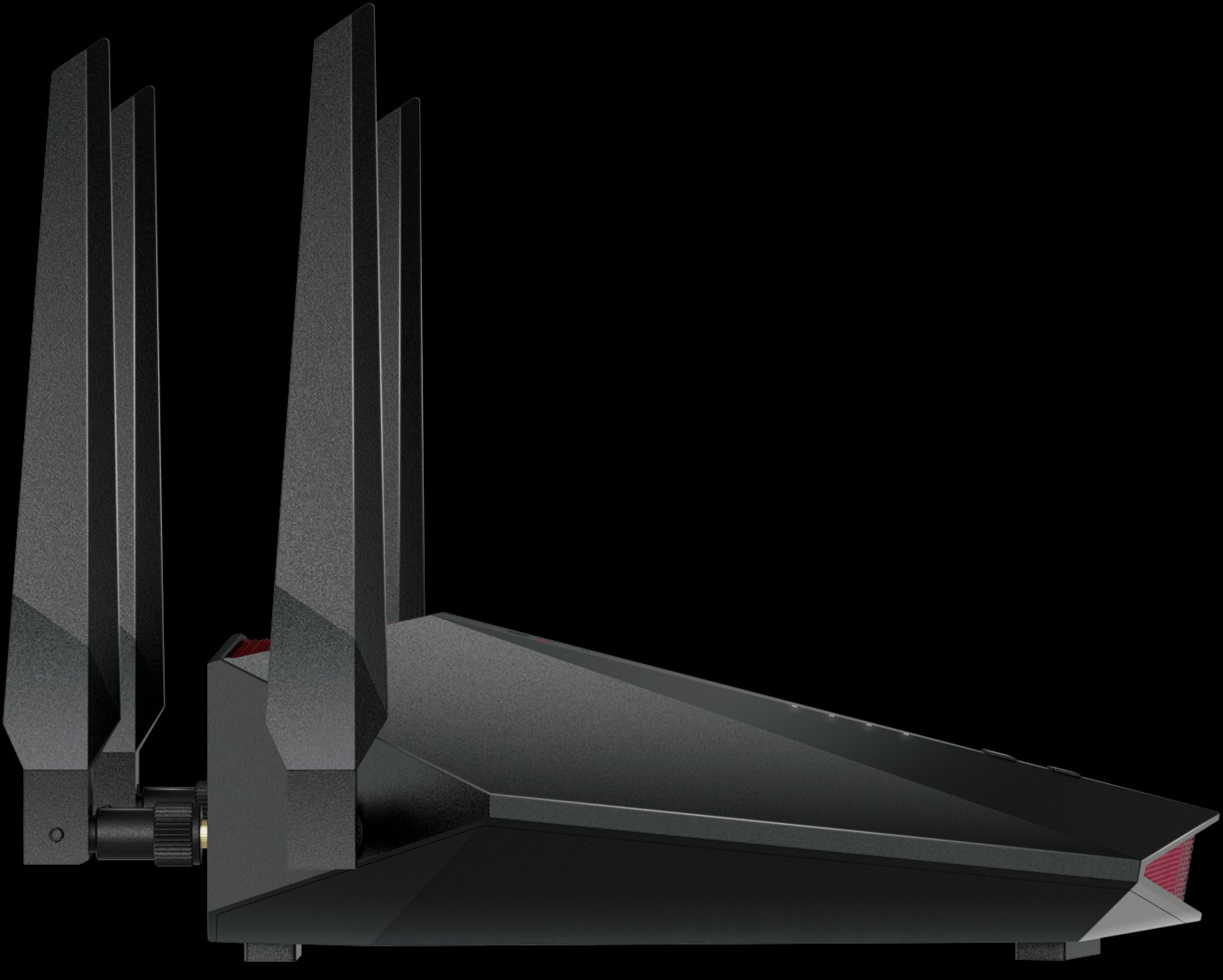 If you’re upgrading your router to the Netgear Nighthawk XR1000, or any other router for that matter, keep the name, security settings and password of your local wireless network (SSID) the same. This way, you’ll only have to tweak the WiFi network name and password once on the router and all of your old devices should connect automatically. Remember to do this for both the 2.4GHz and 5GHz WiFi bands to ensure a smooth local network transition.

The Netgear Nighthawk XR1000 is branded as a gaming router, and if you’ve ever encountered one of these router variants in the past, you’ll know they can sometimes be hulking things. This isn’t the case with the XR1000, which packs a lot of power into a comparatively smaller package. This means it can fit inside the right-sized TV unit, even if it should be sitting atop something to keep those aerials tall and clear.

As a WiFi 6 router, the performance is great at offering Ethernet-like speeds for wireless devices, and it even does a great job of boosted handling with WiFi 6 devices. I ran internet speed tests across a WiFi 5 (Samsung Galaxy S9 Plus) and WiFi 6 device (Samsung Galaxy S21), and the benefits of WiFi 6 were made quickly apparent. At short range on the XR1000’s 5GHz band, upload speeds, latency and jitter were negligible, but the S21 had a close-to-20Mbps edge over the S9 Plus for download speeds.

Shifting the tests into the bedroom, where there’s a thick concrete wall between devices and router, both the 5GHz and 2.4GHz tests were taken out by the WiFi 6-capable S21, convincingly so when it came to the 2.4GHz tests. The final test was conducted in the study, which can only be wirelessly reached by the 2.4GHz signal and, even then, that’s through two thick concrete walls. WiFi 6 had a commanding 70% edge over the WiFi 5 device for download and upload, with a 60% improvement in jitter. While far from ideal networking situations at 36/14Mbps speeds on an NBN 100/40 connection, it makes for viable WiFi 6 networking in an interfered space that’s usually only wirelessly accessible with a WiFi mesh system. 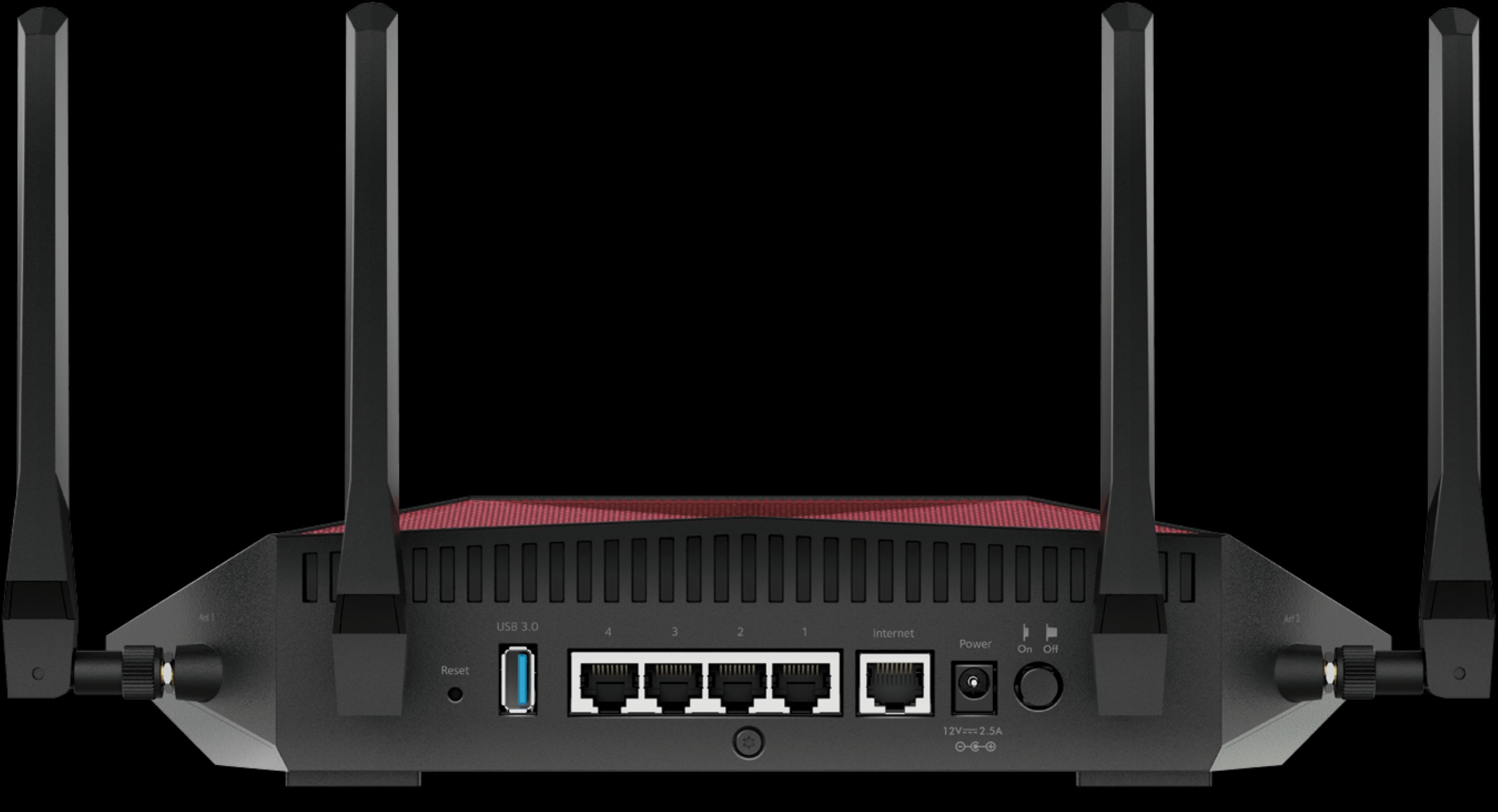 The hidden cost of a gaming router is usually that it takes at least a moderate amount of networking proficiency to set up and tweak. It’s great to see that Netgear allows for simplified networking controls via the Nighthawk app, which means you can take advantage of a powerful router without having to know anything about networking.

Conversely, if you want to tinker, there’s an incredible range of settings to dig into as part of the DumaOS 3.0 dashboard. It’s more refinement than revolution compared to DumaOS 2.0, but there are fantastic gamer-centric features including an improved Geo-Filter, a Ping (latency) Heatmap, and old-faithful Quality of Service to ensure you have enough bandwidth for latency-sensitive tasks (gaming and VoIP, specifically) when others start trying to hog the bandwidth.

I personally appreciated how easy it was to forward ports, switch my router’s IP address, change my DNS to something faster and more private, and to enable a network-level VPN service. Despite my knowledge when it comes to tweaking with router settings, I love that the Nighthawk app lets me know when there’s a firmware update, which benefits XR1000 owners of all networking experience levels.

A pricey but worthy investment in future-proofed WiFi 6 networking.

If your router (gaming or otherwise) is getting long in the tooth, the Netgear Nighthawk XR1000 is absolutely worth considering. While the price is high, treat it as an investment in your future devices that will likely include WiFi 6. The main disappointments for this gaming router is on the ports front: limited to only one USB 3.0 port (handy for turning a USB drive into a network drive) instead of two, and only four Ethernet ports instead of six or eight. Still, if the ports and price aren’t detractors for you, consider the XR1000 a wholly recommendable WiFi 6 networking companion.

Looking to level up your gaming gear?

Or tune in for our top picks for gaming headsets