Fixed Wireless NBN: Everything you need to know

WiFi on a grand scale.

Australia is a vast nation, which is why the prospect of rolling out fibre to every home isn’t entirely practical. Still, while those in rural and regional areas don’t have access to all of the NBN speed tiers of fixed-line homes in metro places, a Fixed Wireless NBN plan offers better speeds, lower latency and bigger-data plans than Sky Muster satellite NBN.

What is Fixed Wireless NBN, and how does it work?

The easiest way to conceptualise Fixed Wireless NBN is to think of a massive WiFi network or, if you’re familiar with it, home wireless broadband. While the networking gear in your home is designed to share the internet wirelessly for dozens of metres, Fixed Wireless technology is built to wirelessly connect homes to the NBN up to a dozen or so kilometres away. 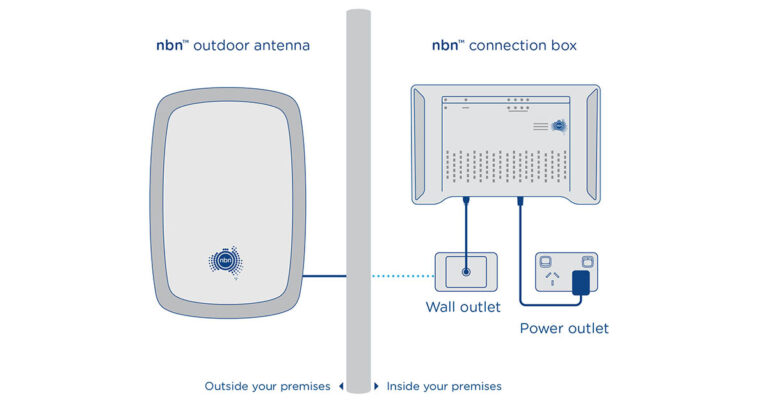 Below is a breakdown of popular Fixed Wireless NBN 12 plans from our comparison engine:

And you can see popular NBN 25 plans below:

Finally, these are the popular NBN 50 plans from our database:

​Homes in metro areas have the biggest selection of NBN providers, and we track dozens of them in our comparison engine. The list is smaller when it comes to Fixed Wireless NBN providers, but we still track more than 10 in our database:

NBN technologies in metro areas like Fibre-to-the-Premises (FTTP) and Hybrid Fibre Coaxial (HFC) can connect to NBN 100, NBN 250 and even NBN 1000 plans. Fixed Wireless NBN, though, maxes out at 75Mbps as part of a Fixed Wireless Plus plan, which is more reliably treated as an NBN 50 plan. NBN 50 plans typically reach download speeds up to 50Mbps, while Fixed Wireless NBN users can also sign up to NBN 25 (25Mbps max download) and NBN 12 (12Mbps).

The Fixed Wireless NBN modem is more commonly called an NBN connection box or Fixed Wireless NTD. This device may look like a router with its multiple UNI-D Ethernet ports but, unless otherwise instructed, it’s just the first UNI-D port that connects to the WAN port of a WiFi router to share internet around the home wirelessly.

The NBN connection box will be provided by the NBN technician during initial setup, and the router will either be supplied by your provider or you can use your own. If you fancy a Fixed Wireless NBN plan that comes with an NBN-compatible router or has the option to purchase one, check out the list below of options from our comparison engine:

If you were to rank NBN technologies, Fixed Wireless NBN would be second-last, ahead of NBN Sky Muster satellite but behind all NBN metro technologies. Here’s a look at the ranking in terms of fastest speed potential, lowest latencies and greatest overall reliability:

Read on for a more specific breakdown of how each NBN technology compares to Fixed Wireless NBN.

Fibre-to-the-Premises uses a full fibre connection from home, across the entirety of the NBN and to the nearest Point of Interconnect. Fixed Wireless NBN has a fibre connection from the NBN tower to the NBN, but the connection between that tower and home is wireless, which means it’s slower, has higher latency and has a greater chance of interference.

Hybrid Fibre Coaxial homes, like FTTP, can sign up to NBN 100, NBN 250 (most) and NBN 1000 (some) plans. HFC has a mostly fibre connection with the link between NBN and home completed by the high-speed coaxial network, which is why HFC homes can sign up to faster plans than Fixed Wireless NBN abodes.

Fibre-to-the-Building is very similar to FTTC in that it’s a mostly fibre connection to a node in a building’s telecommunication room, with the last stretch connecting individual homes likely relegated to copper wiring (though it can also be fibre). This means that FTTB homes can sign up to NBN 100 plans and below.

Fibre-to-the-Node has a similar hybrid copper/fibre mix to FTTC and FTTB except that the average distance of copper connecting a fibre node to an FTTN home is 450 metres. Depending on the length and quality of the copper, FTTN homes can technically sign up to NBN 100 plans, but a smaller percentage of homes can only sign up to NBN 50 plans with an even smaller number only capable of NBN 25 speeds.