Even Hollywood's top directors have flops, so which films are worth your time? 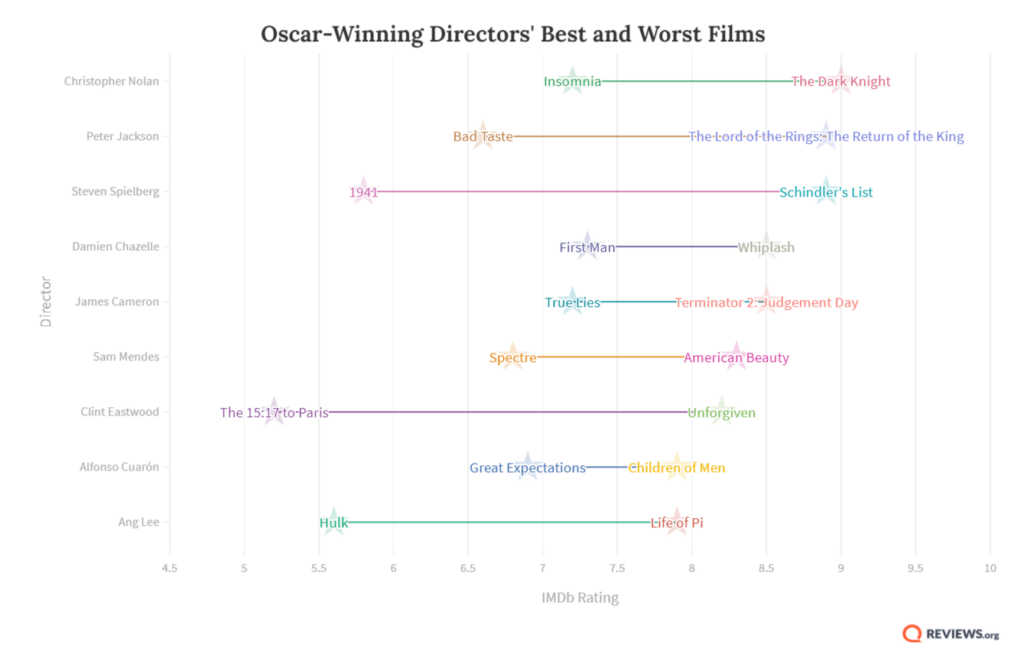 A plane flies across a frozen tundra in Alaska. There’s a passenger who looks a bit irritated and overworked. He’s on his way to investigate a homicide in a small remote village. He just needs to keep his eyes open—in more ways than one.

That’s the opening scene of Insomnia, a 2002 thriller starring Al Pacino and directed by none other than Christopher Nolan. Maybe you know the name—he directed the recent Tenet movie, among many others. You know what’s really surprising about Insomnia? According to 270,000 users who ranked the movie on IMDb, it’s his worst film ever with a score of only 7.2.

Directors like Alfonso Cuarón, James Cameron, and Sam Mendes have an interesting track record. In most cases, even their worst films still rank higher than most directors' best. In our survey of award-winning directors’ best and worst films, we found quite a few surprises.

The highs and lows of Hollywood's best

The hero we deserve

First off, top honors among the most famous directors goes to Nolan for The Dark Knight. Yes, it’s a movie about a dark-robed man who dresses like a bat. No, that’s not weird at all. The sequel to Batman Begins (with an 8.2 user ranking on IMDB) is at turns an exciting thrill ride, a dark commentary on white privilege, and wonderfully cinematic.

The trip nobody wants to take

At the bottom of our list is a movie that really deserves more credit. The 15:17 to Paris from 2018 recounts how three young men prevented a terrorist attack on a train in Paris. The director is Clint Eastwood, and, let’s be honest, even his lowest-ranked movie is still well worth watching. This is the actor-director who gave us Unforgiven (his top-ranked movie).

What’s so surprising about our list of the best and worst-ranked movies is how many of the films are rated around 8 out of 10. We mean: almost all of them. Keep in mind that, in some cases, over a million people have weighed in on films by Ang Lee (who directed the top-ranked Life of Pi) and Damien Chazelle. The last name sticks out because his best movie Whiplash clocks in at number 4 on our list and (get this) it’s a movie about a guy who teaches drum lessons.

At least we can say this: Alfonso Cuarón is the heavy hitter among this group. You can argue with that statement because maybe you like Nolan, Spielberg, or James Cameron better, but his best-ranked movie—that would be the sci-fi opus Children of Men—is only a hair above his lowest-ranked movie—the somewhat insufferable rom-com Great Expectations. Also, he directed the movie Gravity, which won best picture a few years back. Also, we’ll admit some bias here. His black-and-white film Roma is the best thing on Netflix. Like, ever.

There are a few more surprises, but the one that sticks out the most is a little film called Harry Potter and the Prisoner of Azkaban. It was also directed by Cuarón and is arguably one of the best fantasy films ever made, but it’s not on our list. The reason? It's practically tied with Children of Men on IMDb (with a Metascore difference of two points), but missed the mark by the crooked nose of Dumbledore. Sad, just sad. Maybe if everyone reading this waves their little magic wand (a.k.a., writes a positive review) we can change that outcome.

What else is worth noting? One notable discovery is that Steven Spielberg has the widest gap in the IMDb user reviews. Schindler’s List is at the top with a score of 8.9, but way down at the bottom is the movie 1941. Maybe you’ve seen that WWII farce and can appreciate the comedy bits by Jim Belushi and Dan Akroyd, but it does feel a little dated.

Ultimately, they're all worth a watch

Overall, we’ll say every one of these movies is worth investigating. Even the movie Hulk, with a second-worst rating behind The 15:17 to Paris, has some stellar moments. In these strange and perilous times, sitting in a dark room watching a man dress up like a bat? Rewatch the best movie Peter Jackson ever made (that would be The Lord of the Rings: The Return of the King with an 8.9 rating)? It’s a wonderful way to kill time … and a few buckets of popcorn.

Reviews.org analyzed the filmographies of 10 present-day directors with the most Oscar wins per Screenrant. Filmographies were pulled from the director’s IMDb profile, and only films where they are listed as “director” have been included in our analysis. We then highlighted each director’s best and worst film according to IMDb ratings, with the following criteria: