The nation’s second-largest cable internet provider has decent prices, fast speeds, and no data caps or contracts. But is that enough to outweigh its bogus fees and poor customer service?
Spectrum Internet Plans

Our Rating
Call Now: (877) 680-4469
Our Rating
View Plans
Call Now
https://www.reviews.org/internet-service/spectrum-internet-review/
We think Charter Spectrum internet is hit or miss. Read our review of Spectrum Internet's prices, speeds, and data caps so you can make the right choice.
May 17, 2021

While Spectrum received some not-so-great news coverage in the past,1 it offers up some good prices and download speeds when compared to other internet service providers (ISPs) that cover the same locations.

To top that off, Spectrum Internet plans come with a few extra perks you might not find elsewhere, like unlimited data. So is Spectrum the right internet provider for you? Let’s dig into the facts and find out.

Looking for a Time Warner Cable or Charter Communications internet review?
You’re in the right place. Back in 2016, Charter Communications bought both Time Warner Cable and Bright House Networks. Yup, now all that ISP prowess is housed under one name, Spectrum. And you’ll find all the juicy details about Spectrum internet right here in our review.

Spectrum has a couple good deals, but we’d love to see a lower price on its Gig plan.

If you’re looking for fast download speeds that’ll keep a family gaming and streaming over the weekend, Spectrum has you covered. It offers a few different plans with speeds ranging from up to 100 to 1,000 Mbps.* Each of those speeds is juicy enough to keep that buffering icon away.

But we’re not gonna lie, we’d love to see more plans from Spectrum. That’s because we love choices, and right now Spectrum doesn’t offer anything in the way of slower download speeds at lower prices.

Sure, the price for its up to 100 Mbps plan* is reasonable, but what about solo gamers or casual web surfers that don’t need that much speed? (Of course, more speed is better than less speed, so we still think the Spectrum Internet® plan is a deal.)

You might hear Spectrum compared to AT&T Fiber or Frontier. That’s because these three ISPs serve some of the same parts of the US.

When it comes to price, we think AT&T Fiber offers the best value—and the lowest prices. AT&T Fiber is also a fiber connection, which tends to be more reliable than the cable connection Spectrum uses.

But if you can’t get AT&T Fiber and instead have a choice of Spectrum versus Frontier, we’d go with Spectrum. Frontier’s prices start out great, but quickly skyrocket to the highest price we’ve seen for a gig speed plan.

Spectrum price comparison
Data effective 11/04/20. Offers and availability vary by location and are subject to change.
‡ For the first 12 months.
^ For the first 12 months plus taxes and equip. fee.
° for 24 months with 2-year agreement. Actual speeds may vary. Installation, equipment fees, Internet Infrastructure Surcharge, early term, taxes & other fees apply. Services subject to availability and all applicable terms and conditions.

Is Spectrum Internet available in your area?

Spectrum Internet is available in 42 states, so chances are pretty good that it’s available near you. Especially if you live in the northeastern US, where Spectrum is focused on connecting cities and towns to the world wide web. 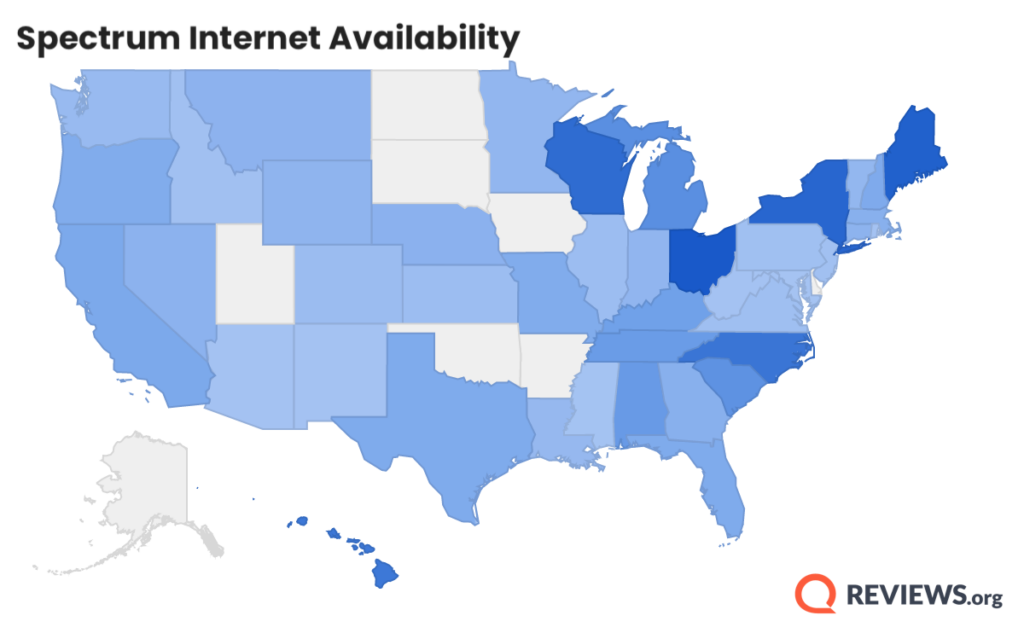 Of the states where you can find Spectrum, here are the top five states with the most availability:

If you’re not sure whether Spectrum Internet is available in your hometown, we can help you out. Just enter your zip code below and we’ll tell you if Spectrum is in your area.

Stream in 4K or download your entire Steam library without worrying about data charges.

We mentioned we wished Spectrum offered more choices for download speeds, but what speeds it does offer are great for streaming The Expanse on Amazon Prime Video or teaming up with your buddies in a PlayerUnknown’s Battlegrounds match.

The up to 100 Mbps plan* should be hefty enough to keep parents happily streaming Schitt’s Creek while their kiddo watches Phineas and Ferb on Disney+. (Just maybe not in the same room.)

But if you’ve got more than a few connected devices, like cell phones, home security systems, and smart TVs, and still want to binge-watch The Great British Baking Show when you come home from work, you’ll probably want to upgrade to Spectrum’s up to 200 or even up to 400 Mbps plan.*

And that Spectrum Internet Gig plan? That’s perfect for a large family who loves to do all of the above—or for serious gamers or adults who make a living working from home.

So what about all this news coverage of Spectrum’s slower-than-advertised speeds? Yeah, we’ve heard about that too, and it has us shaking our heads in disappointment.

In our latest analysis of the fastest internet providers in the US, Spectrum ranked 14th out of the 38 total ISPs we analyzed. That puts it far below other cable internet providers like RCN (ranked 6th), Xfinity (ranked 7th), and Optimum (ranked 9th).

Our highest-ranked cable internet provider, RCN, earned 47.4 out of 100, while our lowest-ranked cable provider, Sparklight, earned 31.5 out of 100. That puts Spectrum toward the bottom of the pack when it comes to internet speed from large cable ISPs. So, we expect that you’ll likely get slower speeds than what you pay for with Spectrum.

The somewhat silver lining is that Spectrum has no contracts. So if you find your download speeds waning and customer service is no help, it’s easy to put a stop to your service and find someone else. You won’t get slapped with early termination fees either.

What speeds do I need?
Not sure if Spectrum’s download speeds are enough for you? Check out our Mbps guide for more info.

Spectrum will neither throttle your speeds nor charge you extra for your data use. That’s the best kind of “no” we’ve ever heard.

While most ISPs offer only 1 TB of data (which is usually more than enough data for most of us), Spectrum’s unlimited data is a dream come true for anyone who uses the web for file sharing, (legally) downloading movies, or working from home.

Spectrum comes with no contract, but you’ll still pay for installation and a Wi-Fi activation fee.

We like that Spectrum offers a no-contract internet option because it frees you up to switch providers if you’re moving homes or unsatisfied with the service. That’s perfect if you’re renting, temporarily in a city for work, or just don’t like commitments. (We get it.)

Other options for no-contract internet that may be in your area include Frontier and Xfinity.

The only issues we have with Spectrum are it’s additional fees. Those fees are a confusing bunch, so we’ll try to clear them up for you.

Spectrum throws in a free modem with your internet, which is pretty nice of them. Most other companies charge anywhere from $10 to $20 extra a month to rent equipment.

Of course, you can still bring your own modem and router combo if you prefer. If you need a recommendation, we’re fans of this ARRIS SURFboard modem router combo from Amazon.

Also, what the heck is up with that Wi-Fi activation fee? No one knows, but it’s been a hot topic of discussion for a few years at least. We’ve never seen a similar fee from any other ISP, so we really don’t get why Spectrum feels the need to charge for your Wi-Fi set up.

Internet service as a whole doesn’t do well in the customer service department. We know that’s no excuse, but we want to put the situation in perspective before we dive into how Spectrum’s customer service performs.

The American Customer Satisfaction Index (ACSI) scores ISPs for customer service each year, and the internet industry averaged a score of 65 out of 100 for 2020.3 So if you look at Spectrum’s latest score of 63 out of 100, it may not seem that great. But that score is still a major improvement from last year, when Spectrum scored a lackluster 59 out of 100.

So, while we’re pleased to see Spectrum improved over the past year, we’re still expecting bigger and better things from it.

But if you have no other choice but to call customer service, what can you do? First thing’s first, take a deep breath and grab a pen and paper.

Get in touch with Spectrum here:

Who it’s best for: If your family loves to stream videos or play Farming Simulator 19 together online, the Spectrum Internet plan’s up to 100 Mbps* is fast enough to keep you connected on a budget.

But hey, if your house is home to a large family, you’ve got kiddos uploading YouTube videos, or a partner who works from home, you’ll want to look into the up to 400 or 1,000 Mbps* plans instead.

Why we picked it: The price Spectrum charges for its up to 100 Mbps plan* isn’t the best out there, but it’s still reasonable. We also think it’s the best deal of all three Spectrum plans available. So if you’re stuck on a budget but still love to game and stream reruns of Parks and Recreation, we think this plan is the perfect compromise.

Data effective 5/17/2021. Offers and availability vary by location and are subject to change.

Spectrum’s got okay pricing and customer service, but on the plus side it pairs its fast speeds with unlimited data and no contracts.

As the nation’s second largest internet provider, Spectrum has to compete with big dogs like Xfinity, Verizon, and AT&T.

How does it stack up? Mmm, so-so if you ask us.

It’s widely available in the United States, offers a wide range of speeds that work for streaming or gaming households, and keeps you going with unlimited data—all while avoiding contracts.

But its confusing fees—including a bogus Wi-Fi activation fee—and iffy customer service make us hesitate. Can you find better than Spectrum? Yes. But are there worse ISPs out there? Again, yes.

Data effective 5/17/2021. Offers and availability vary by location and are subject to change.

Back in 2016, Charter Communications bought both Time Warner Cable and Bright House Networks. Now, all that ISP prowess is housed under one name, making Charter the proud new owner of Spectrum.

How much is Spectrum Internet after 12 months?

After 12 months of service, your prices will increase by $21 for internet only and by $25 for bundles. Since Spectrum doesn’t require a contract, your promotional price isn’t guaranteed after the first year (although it’s worth calling and negotiating for if you’re an existing customer).

How do I install Spectrum Internet?

If you already have a cable connection and basic knowledge of modems and routers, you can set it up yourself. It’s straightforward enough if you’ve set-up a Wi-Fi network before, but there’s a Spectrum video if you haven’t.

Look for Spectrum Internet plans near you.