Xfinity Mobile offers affordable 5G cell phone plans, millions of hotspots, and best-in-class customer service. The only catch is you must already have Xfinity home internet.

You might know Xfinity from Comcast for its internet, television, and home security services. Now, meet Xfinity Mobile.

Xfinity Mobile offers solid and cheap cell phone plans for those already in the Xfinity ecosystem. The downside to Xfinity Mobile is that you have to endure data throttling, slowdowns, and poor video streaming quality (unless you have a 5G device).

The first thing you should know about Xfinity Mobile is that its mobile services are available only to people who’ve already signed up for Comcast-Xfinity residential internet. (If that’s a deal-breaker for you, check out these other individual and family plans that compare in quality and affordability.)

Here’s what else you need to know about Xfinity Mobile right up front:

Let’s get down to brass tacks.

All Xfinity Mobile plans come with free unlimited talk and text. You just pay for the data in one of two ways: either By the Gig or Unlimited. Within the By the Gig plan category, there are 1 GB, 3 GB, and 10 GB plans.

All data options now include 5G data at no extra cost, just as long as you have a 5G device and live in an area with a 5G network.

The Big Three mobile carriers—AT&T, T-Mobile, and Verizon—are all offering great trade-in deals right now. That means you can get $700 or more off select smartphones like the iPhone 12 when you trade in your old device.

Find these and other offers in our monthly roundup of the best cell phone deals.

Figuring out which of these two plan types—unlimited or By the Gig—is right for you may take a bit of math. But don’t worry, we’ve got the cheat sheet. It boils down to this:

If you think you will use more than 3 GB of data per month, then the unlimited plan becomes cheaper than paying by the gig.

But let’s talk about each plan type in detail.

What do you have to give up to get a price that good? In some cases, speed.

Here’s what you need to know about Xfinity Mobile’s unlimited plan and data speeds.

4G LTE data speeds are throttled, capped, and deprioritized. For LTE data, you’ll get download speeds of 5–12 Mbps and upload speeds of 2–5 Mbps. However, just like with Xfinity internet, once you hit their soft data cap (in this case, 20 GB), you’ll get deprioritized, meaning your speeds will get slashed to almost nothing (1.5 Mbps download and 750 Kbps upload).

5G is much faster. For 5G data (where available), Xfinity Mobile says you can expect download speeds around 450 Mbps and upload speeds around 50 Mbps. The only limitations are your device (must be 5G-capable) and your location (must have 5G infrastructure in place).

Mobile hotspots use 3G speeds. Xfinity’s throttling also extends to mobile hotspots, which are capped at 600 Kbps. That’s 3G-level slow, which is fine for basic websites and email, but don’t expect to stream much of anything at that speed.

Video streaming on the unlimited plan depends on the network (4G LTE vs. 5G) and whether your device is 5G. As this table shows, the default streaming resolution is 480p, which is just standard definition (SD), for non-5G devices on either network.

5G devices on the 5G network get the most love, but if you don’t have a 5G-capable device, you can still buy HD streaming for any line. That’ll get you 720p resolution for smartphones and 1080p for tablets.

Xfinity Mobile By the Gig plan

This plan is like the bulk section of the grocery store: instead of buying pre-packaged data, you buy it raw, by the gig.

This plan is ideal if you use data only once in a while to send a picture to your kids or reply to an email. You could pay as little as $15 a month and still get unlimited calls and texts.

By the Gig plans really pay off if you’re strategic about your data usage. With free access to Xfinity’s 18 million hotspots, you’ll often be able to use the internet through Wi-Fi rather than 4G, especially if you’re in an urban area.

One advantage the By the Gig plans have over the unlimited option is the default video streaming quality.

As this table shows, the lowest quality stream on the By the Gig option is 720p, even if you’re only on the 3G network. That’s HD, and it looks a lot better than the 480p you’ll get with the unlimited option.

Of course, if you want to save on data usage (because you are, after all, paying for it by the gig), you can elect to stream at 480p.

Interested in prepaid plans?
If you’re interested in the flexibility of the By the Gig plan, but Xfinity is not right for you, check out our list of the best prepaid cell phone plans.

Xfinity Mobile vs. the competition

As we’ve said, Xfinity Mobile’s plans are cheap but not the cheapest.

Here’s a quick look at how the company’s plans compare to similar offerings from other carriers.

As you can see, Xfinity Mobile is right in the middle of the pack—there are a few other MVNOs offering cheaper unlimited plans, but Xfinity is still cheaper than the Big Three.

As we’ve mentioned, Xfinity Mobile’s cheap cell phone service is available only to those who have Xfinity internet already.

The downside is that Xfinity doesn’t appear to have bundling deals to entice new customers. In other words, you can’t get a discount for signing up for both Comcast cable TV and Xfinity Mobile.

Even so, existing Xfinity home internet customers who want to cut their cell phone bills should definitely look into switching to Xfinity Mobile.

Xfinity Mobile carries all the flagship smartphones, devices, and even wearables

Need a better camera to up your Insta game? Xfinity Mobile has deals and payment plans for the newest Apple, Samsung, and Google devices.

Here’s a look a some of Xfinity’s most popular phones.

Xfinity Mobile has some great deals on new smartphones, especially if you’re in the market for a new 5G device.

And if you’re looking to switch but want to keep the phone you already have, now is a great time to do it. Through June 7, 2021, Xfinity Mobile is offering a $25 prepaid gift card when you sign up for the unlimited 5G plan and bring your own device.

Check out Xfinity Mobile’s current deals here for the details.

Xfinity Mobile is a mobile virtual network operator (or MVNO). That means Xfinity uses one of the Big Three networks—in this case, Xfinity uses Verizon’s cell towers. That’s good news for Xfinity customers because Verizon’s network tops our list for best mobile coverage. Check out this coverage map to see for yourself.

Xfinity Mobile customers may actually be marginally more satisfied with their coverage than Verizon customers. Xfinity has a large number of Wi-Fi hotspots—millions, in fact—that bolster its network.

Our own research shows that Verizon is the second fastest network in the country. Just remember that Xfinity Mobile’s unlimited plan caps your 4G LTE download speed at 5–12 Mbps and upload speed at 2–5 Mbps. To get the most out of the Verizon network, you may want to consider a 5G device. 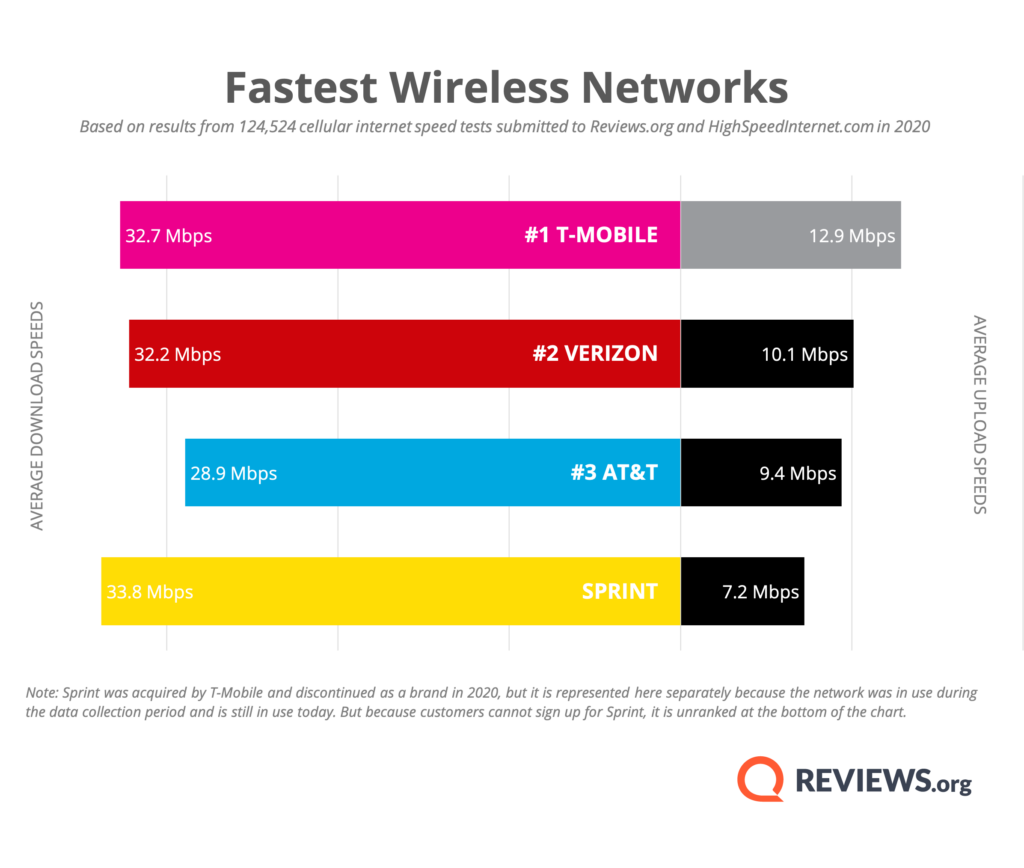 If you’ve ever wondered why a cell plan with an MVNO is cheaper than going with one of the Big Three, it has a lot to do with the data speeds you see here. To get access to the max download speeds a network has to offer usually means ponying up for an unlimited plan from Verizon, AT&T, or T-Mobile.

Mobile is a relatively new service from Xfinity, so there wasn’t much data out there regarding their customer service until recently. But according to the American Customer Satisfaction Index (ACSI) Wireless Service and Cellular Telephone Report for 2019–2020, Xfinity Mobile debuted at the top of the list for full-service MVNOs.

Here’s what the ACSI report has to say about Xfinity Mobile:

In its ACSI debut, Comcast’s Xfinity Mobile comes in a winner—topping the full-service MVNO category with a customer satisfaction score of 79. Moreover, Xfinity Mobile ranks second across all three wireless categories—behind only Consumer Cellular (83). … Across all wireless services, Xfinity Mobile is best in class for the quality of its app.

That’s a pretty glowing review for Xfinity Mobile’s customer service and its app.

There’s just one adjective to describe Xfinity Mobile service: unique. Because of its bundle-only model, plan structure, and rock-bottom prices, it really is like no other mobile carrier. Here’s a quick rundown of what we found in our review of Xfinity Mobile.

If you’re reading to plunge deeper into the Comcast universe with Xfinity Mobile, you can sign up easily online.

Still have questions about Xfinity Mobile that we didn’t cover above? We’ve got you covered.

Q: Does Xfinity Mobile have an app?

Yes. You can download it from the Apple and Google app stores, as well as from Xfinity here.

Xfinity Mobile doesn’t charge an activation fee, assuming you’re already an internet customer (otherwise, signing up for Xfinity internet is the activation fee). Compared to leading carriers like T-Mobile and AT&T, this is a great perk for returning Xfinity customers.

Q: Should I get a warranty or insurance for my Xfinity Mobile phone?

If you’ve got butterfingers, then you’ll be happy to know that Xfinity Mobile phones come with a 12-month manufacturer warranty.

Q: Does Xfinity Mobile let you bring your own phone?

Yes! Just make sure to check availability for your phone model.

Q: Can I keep my phone number when I switch to Xfinity Mobile?

Yes! And if you want a new number, you can do that too.

Xfinity Mobile’s customer agreement states that you can cancel service anytime without a fee. Plus, the return policy gives you 14 days to return devices from the date of shipping.

Q: Does Xfinity Mobile have a military discount?

No, but if you are signed up for other Xfinity services, you may be eligible for a gift card.

Q: Does Xfinity Mobile have a student discount?

No, but you can check if you’re eligible for Xfinity internet discounts.

When we looked at Xfinity Mobile’s cell plans, we compared them to similar plans from the Big Three networks and other MVNOs. We use the WhistleOut online comparison tool and combine it with our own independent research and information provided by the carriers themselves. Sources are listed below.

For network coverage information, we use WhistleOut coverage maps, which are sourced from the carriers and other third-party sources.

For data speed comparisons, we rely on our proprietary information and research into the subject, which is based on hundreds of thousands of unique wireless internet speed tests submitted to Reviews.org and related sites.

Customer satisfaction ratings are based primarily on reports from the American Customer Satisfaction Index (ACSI). We use the latest reports available but also consider historical performance in past reports. We also include information from forums and other online rating sources when appropriate.

If you want to know more about how we work, check out our complete methodology.