Looking for the fastest internet providers? We’ll tell you which ones actually get you the speeds you pay for.
Best Overall

Tired of waiting for your games to download on Steam? Or maybe that buffering icon is beginning to frustrate you a little too much?

We’ve all been there. And likely what we all need is faster internet access.

If you’re on the hunt for the fastest internet, these internet service providers (ISPs) will give you more than just something to brag about. We took a look at the cold, hard data to find out which internet plans are worth their speed in gold. So without further ado, here are the five fastest internet providers. 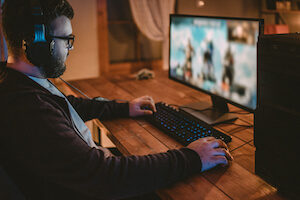 AT&T’s fiber internet leads the pack—and it’s one of the most widely available fiber networks.

Fiber internet is usually the fastest option out there. Sure, Xfinity’s got a 2,000 Mbps cable plan, but if you want the fastest possible speeds, there’s a reason we always recommend fiber. If you want it but Google or Verizon Fios don’t cover your area, then AT&T is likely your best bet.

As a whole, AT&T ranks just above Verizon Fios on the Federal Communications Commission (FCC) report.1 Of course, in HighSpeedInternet.com’s rankings, AT&T does get edged out of the top five overall fastest providers. But if you drill down into each region, you’ll see its fiber plans show up in second or third place depending on the location.2

But neither report tells us whether these companies looked at just AT&T’s fiber plans, its DSL plans, or both.

That makes it difficult to really gauge what kind of performance you’re going to get—but since AT&T scored well on both the FCC and HighSpeedInternet.com reports, we think that’s a good sign you’ll get the speeds you were promised.

We admit it, AT&T’s DSL plans aren’t mindblowing, but its fiber plans are super fast and you’ll pay similar prices—or sometimes even less—than what Verizon charges for its Fios plans.

We mentioned AT&T’s fiber network is more widely available than Verizon Fios, right? If you take a look at the AT&T fiber coverage map, it’s clear you can get it almost anywhere in the US—including the West Coast, South, and even some of the Midwest.

Who is AT&T Fiber best for?

AT&T’s fiber plans work best for these types of people:

Verizon Fios Home Internet is a reliably fast 100% fiber-optic network, but it may not be available in your area.

Verizon Fios provides a true Fiber to the Home (FTTH) experience. That means you won’t wonder if your connection is fiber-optic all the way to your house or if you’ve got a DSL line or neighborhood node slowing things down.

And this focus on fiber pays off. You can see Verizon Fios Home Internet reliably delivers on the speeds it promises in the FCC’s 2018 report and in HighSpeedInternet.com’s speed rankings.1, 2

Prices for Verizon’s Fios fiber internet match up with competing fiber internet providers. Yup, you can fist pump for joy knowing you won’t be stuck paying more—even though we think a reliably fast internet connection is totally worth it. (We gotta get our Path of Exile fix!)

OK, let’s have a quick heart-to-heart chat about Verizon Fios Home Internet’s top speed: up to 940 Mbps. This doesn’t sound quite as awesome as 1,000 Mbps or even one gigabit. (Just saying that gets our hearts racing with adrenaline.)

But we look at that max speed of up to 940 Mbps as Verizon’s attempt to be transparent. Or at least not get your hopes up that your speed will reach 1,000 Mbps, then be let down if it doesn’t. (Though you can clearly see Verizon Fios Home Internet usually delivers what it promises.)

So make sure to check your ZIP code before you get too excited. Or, if Verizon Fios Home Internet doesn’t serve your ZIP code, check out AT&T Fiber above to see if it’s available in your area.

Who is Verizon Fios Home Internet best for?

Verizon Fios Home Internet is a pro choice if you meet these criteria:

Xfinity offers some serious speeds—and delivers on them.

We know, we know: Xfinity has a massive reputation for lackluster customer service. And it’s warranted. A phone call with Xfinity representatives can feel like a battlefield.

But while its customer service may leave something to be desired, Xfinity scores well in both the FCC’s and HighSpeedInternet.com’s speed rankings.1, 2

Here’s how those shake out.

Xfinity delivers decent speeds across the board and a wide range of prices so you can choose the exact plan you need.

But we’re most impressed with Xfinity’s massive Gigabit Pro plan. With 2,000 Mbps speeds (that’s two gigabits per second, for you tech nerds out there), you could download 10 HD movies in just over three minutes.

That’s some serious speed. Just keep in mind that you’ll pay for it.

Xfinity’s fastest plan is also its most expensive at a ludicrous $299.95 per month. (Not to mention its availability is extremely limited.) Its lower-priced plan, Gigabit, will still give you incredibly fast speeds—and for less than half the price.

Xfinity plans, prices, and speeds
Data effective 11/19/18. Offers and availability vary by location and are subject to change.
† For the first 12 months with a 1-year agreement.
‡ With a 2-year agreement.
Still looking for fast cable internet?
If Xfinity isn’t your jam, you might check out Mediacom, Spectrum internet, or Cox, which scored 2 out of 16, 3 out of 16, and 9 out of 16, respectively, on the FCC 2018 report.1

Who is Xfinity best for?

Xfinity might be your best choice if you’re hopping on the ‘net to do these types of things:

You can probably find an Xfinity plan in your area, since it has wider availability than most ISPs. But be sure to double-check exactly what speeds, plans, and pricing you can get. Those gigabit plans aren’t an option everywhere quite yet.

We know, we know. We’ve already given AT&T it’s 15 minutes of fame for its fiber plans, but honestly, its Up to 100 Mbps DSL plan is pretty hard to beat too.

Again, we’ll point out that neither the FCC nor the HighSpeedInternet.com report clarifies whether AT&T’s DSL plans were included in the analysis of its speed performance.

But we do know that other DSL options, like CenturyLink, Frontier, and Cincinnati Bell, don’t even break 100% actual-to-advertised speeds on the FCC report.1 And they didn’t make an entrance on the HighSpeedInternet.com rankings (except Frontier as the fastest DSL pick).2

So we’re more willing to bet on AT&T.

Now that AT&T’s scrapped its old 5 Mbps plan from the DSL plan lineup, we’re confident in saying its DSL service is fairly priced. Of course, you technically get only one plan—but there’s a catch.

The reason it’s called the Up to 100 Mbps plan is because AT&T will pair you with the fastest download speeds (up to 100 Mbps) in your area. So you could get 25 Mbps, 80 Mbps, or 100 Mbps, depending on how speedy internet is near you.

It ranks 12 out of 16 on the FCC’s 2018 report for actual-to-advertised speed performance—above other DSL contenders Frontier and Cincinnati Bell.1 It also comes with a Price for Life guarantee, which no other ISP offers.

Who is AT&T Internet best for?

Here’s who we think AT&T’s DSL plans are best for:

Satellite internet may be slow, but Viasat tops the chart for satellite speeds.

Satellite internet has historically been a little slow, but if you live in a rural area, it might be your only choice. And luckily for you, Viasat released some impressively high-speed plans (by satellite standards, anyway).

Not so impressive were Viasat’s scores on the FCC report—however, we strongly believe there’s a good reason for that. You see, the FCC report tested ISPs during September 2017, and Viasat’s newest ViaSat-2 satellite didn’t start offering service (and faster speeds) until February 2018.3

And while HughesNet, the only other satellite ISP in the US, scored a whopping 177% for actual-to-advertised speed performance on the FCC report, it caps out at 25 Mbps.1 (That’s sooo slow compared to Viasat’s current speed cap of 100 Mbps.)

If you live in the country but still feel the need for speed, then Viasat’s fastest plan—Unlimited Platinum 100—is probably most compelling, but it’s also the plan with the least availability and highest price.

Because of the way satellite internet works, Viasat’s plans, prices, and speeds change a lot based on your location. How much you pay and what speeds you can get both depend on where you live.

Viasat satellite internet download speeds
Data effective 11/19/18. Offers and availability vary by location and are subject to change.
^ For the first 3 months.

There are only two satellite ISPs? What gives?
Along with steep prices, satellite internet comes with only two options: Viasat and HughesNet. We recommend Viasat for speed, but HughesNet internet might be worth checking out if you don’t mind a slower speed and want to see if you can get a better deal in your area.

Who is Viasat best for?

If you have access to a cable or fiber plan, then we’ll always recommend those over satellite internet. Satellite costs a lot of money, even for relatively low speeds—and you usually get less high-speed data than you would from a non-satellite provider.

But if you live somewhere where your only other option is dial-up, then Viasat’s an easy choice.

Recap: The 5 fastest internet providers of 2020

Which ISPs made the cut for fastest internet based on the FCC’s 2018 report and HighSpeedInternet.com’s rankings? Let’s take another quick look at the fastest broadband plans out there:

How’d we get these speed performance scores, anyway? We’re glad you asked.

Our FCC scores were taken from the commission’s 2018 Measuring Broadband Across America: Fixed Broadband Report.

We looked at the actual speeds compared to advertised speeds for 16 different ISPs and 54 different speed tiers, as measured by the FCC in September 2017. We then added those scores up and divided them by the number of different plans the FCC reported on to get the average actual-to-advertised speed scores we referenced here.

We also turned to HighSpeedInternet.com’s Fastest Internet Providers 2019 report. This report used weighted scores calculated from data collected from the site’s own speed test, which included both download and upload speeds.

Last but certainly not least, our rankings for fastest internet also took into account each ISP’s pricing and availability (and, to a lesser extent, data caps).

Find the best internet providers in your area.