A new prepaid provider that cuts the fluff and gives you more for less. 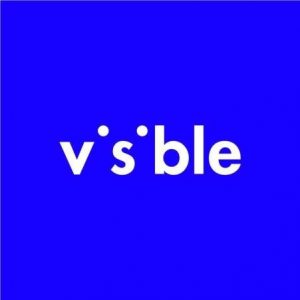 Visible Wireless is a new, no-nonsense cell phone provider that’s going to be a game-changer for many disgruntled cell phone customers. Why?

For one, Visible has decided to skip the cumbersome storefront model. Customers instead sign up online and get a SIM card in the mail. Insert the SIM card into your phone, download the app, and you’re good to go. You can even pay your phone bill using Venmo.

But what’s most impressive about Visible is its substantial, but still affordable, unlimited plan. Despite some issues with network deprioritization (when your phone data is slowed down in favor of other uses), this $40 a month plan rivals others that cost twice as much.

Where did Visible Wireless come from?

Visible is a mobile virtual network operator (MVNO). MVNOs are smaller, prepaid cellular providers that use bigger companies’ existing cell towers. In this case, the bigger company is Verizon Wireless.

Verizon has actually been pumping its own money into Visible since its humble beginnings. Some people speculate that it’s trying to reach the market of younger customers who want cheaper, simpler cell phone plans.

So Verizon is kind of like Steve Buscemi wearing a backwards baseball cap, asking “How do you do, fellow kids.” But you know what, it’s working on this millenial. A $40 a month unlimited plan is hard to argue with.

If that $40 figure is all you needed to hear, then you can sign up now. Or you can take a deeper dive with us in this Visible review.

You’ll get a cheap plan with tons of data. Just watch out for those slowdowns.

With Visible’s mobile plan, you’ll get unlimited talk, text, and data for $40 a month. That’s pretty awesome. But what we like most about this plan is not what it has, but what it doesn’t have: no data speed caps, no extra taxes or fees, and no major coverage gaps.

Plenty of phone plans will give you unlimited data. But not all data is created equal. There’s 3G data, 4G data, LTE data, and now, depending on where you live, there’s even 5G data. These terms refer to the speed of the data, and speed matters when you’re watching Netflix or about to get fragged in a PUBG Mobile match.

Many MVNO’s (and even traditional carriers, like AT&T) will throttle your data after you use a set amount. That could mean you’ll be getting data at 1–3 Mbps, instead of 5–10 Mbps, even with your unlimited data plan.

While Visible Wireless does limit the quality of your video streaming to 480p, the rest of your data won’t be throttled (at least for those who sign up right now—the company has suggested this policy could change in the future). So go ahead, listen, browse, and game to your heart’s content.

Do you really need unlimited data?
You might be tempted to go with a cheaper, limited data plan. But be aware, people tend to use more data than they realize. Here’s a short guide
to figuring out how much data you need.

No extra taxes or fees

Sales tax, who needs it? Fine, schools, roads, and fire departments do. But let’s be honest: our hearts still sink just a bit when we see that our $4 coffee is actually going to cost us $4.26.

This is why we like Visible’s “baked-in” price. That $40 a month includes everything: taxes, fees, and any other possible charge you could think of.

You might lose service with Visible Wireless if you’re off camping in Yellowstone National Park (in which case, you shouldn’t be checking your email anyways—c’mon, now). But you’ll be covered in most other areas of the country.

There’s no limit on the amount of hotspot data you can use, but the speed is capped at 5 Mbps (which should be plenty for streaming and browsing) and you can only have one tethered device at a time.

Want Visible Wireless to sweeten the deal even more?

Fortunately, the company is offering a couple of deals right now. You can get a $100 or $200 prepaid mastercard when you buy a new phone. And your first month’s bill will be just $25 instead of $40.

As the ‘80s hard rock band Poison taught us, “Every rose has its thorn.” Visible’s biggest thorn is that users’ data can be deprioritized.

Remember before, when we talked about data throttling? Well, data deprioritization is similar, but instead of having your data speed reduced for using too much, you can have your speeds reduced during times of “congestion.”

No, this doesn’t mean your phone will slow down when you’ve got a nasty head cold. It means that Visible’s network owner (in this case, Verizon) will prioritize certain customers’ data speeds over others when too many people are connected in one area.

So if you sign up for Visible, you may notice that your phone has a hard time streaming Disney+ during your evening commute.

We only have one more bone to pick with Visible’s mobile service, but it’s not a big one—maybe just like a distal phalange. (Anatomy jokes, anyone?)

With Visible, your video streams will be stuck at 480p (so-called “DVD quality”). But, honestly, most people won’t notice much of a difference between watching His Dark Materials at 480p and 720p when it’s being displayed on a 5-inch screen.

We’re pretty stoked on Visible’s Unlimited offering, but it’s definitely not the only plan worth considering.

If your aim is to have the highest quality plan out there, regardless of price, then you’ll want to look at some more traditional unlimited plans. If, on the other hand, you can live with less—and slower—data, then you might want to look at TracFone or Simple Mobile.

Sure, there are a couple of unlimited plans that are slightly cheaper than Visible’s. But these plans don’t have the benefit of truly unlimited, unthrottled data. They also run on smaller, less reliable networks, like Sprint.

Get the same unlimited plan for even cheaper by using Party Pay (friends not included).

You might have hated sharing your bedroom (and your toys) with your siblings when you were younger, but we know you’re stoked to share that phone bill now that you’re all grown up.

Visible Wireless calls its family plan Party Pay. Using Party Play, you can add up to three additional people to your Unlimited plan. Just make sure everyone has a compatible phone. Here’s a look at what we like, and don’t like, about the plan.

As with the individual Unlimited plan, videos will stream at 480p, and your hotspot speeds will be capped at 5 Mbps, but otherwise your data won’t be throttled. So everyone on your plan can stream to their heart’s content!

Discounts for the more lines you add

Like any good party, Visible’s mobile plan just gets better with more people. When you add one person, you’ll pay $35 a month each. With three people, it’s $30 a line, and with four people, it’s just $25 a line.

That means you can get unlimited everything on four individual lines for just $100 a month. That’s just $10 more than Verizon’s individual Get More Unlimited plan!

Everyone is invited to this party

You don’t have to call up your twice-removed second cousin to justify this family plan. With Visible Wireless, you can split your Party Pay between anyone: your friends, coworkers, housemates, the person you just met on Tinder, etc.

Worried about the logistics of splitting your bill with your lovely but unreliable best friend? Don’t be. Each person on your Party Pay plan will get their own bill and manage their own account.

There’s really only one thing we don’t like about Visible’s family phone plan, and it rhymes with . . . well, “data deprioritization” doesn’t really rhyme with anything.

As we mentioned above, data deprioritization happens when a cellular network decides to give certain people more mobile bandwidth than others.

This occurs in places where there are a ton of people at once (like sports stadiums, traffic jams, Burning Man, etc.), and is more likely to happen with an MVNO like Visible. It’s a bummer, but for some, the low price and good coverage is worth that risk.

There are plenty of great family plans out there. But none of them can quite compete with Visible’s mix of great coverage, truly unlimited data, and simple billing.

As you can see, Total Wireless beats Visible’s price by a few bucks, but that’s before taxes are included. Also, unlike Visible, Total Wireless will throttle your data if you use too much. (And you can hit that limit pretty quickly when your data is split three or four ways.)

Visible’s phone selection has improved, but that’s not saying much.

Visible’s phone compatibility has been a weak spot ever since it arrived on the scene.

Originally, Visible only worked on a few iPhone models. But now, anyone using at least an iPhone 6 (or newer) should be compatible. The company has also expanded service to work with several Android devices, like newer models of the Samsung Galaxy and Google Pixel.

If you’re interested in upgrading, you can buy a new (or new-to-you) phone from the company. Here’s a peek at some of the cell phones Visible sells.

What top phones does Visible Wireless have?

How good is Visible Wireless coverage?

Let’s just say it’s not ideal if you plan to live totally off the grid.

Sure, we’ve told you that Visible’s Verizon-run network is the best available, but what does that mean? Well, take a look for yourself. 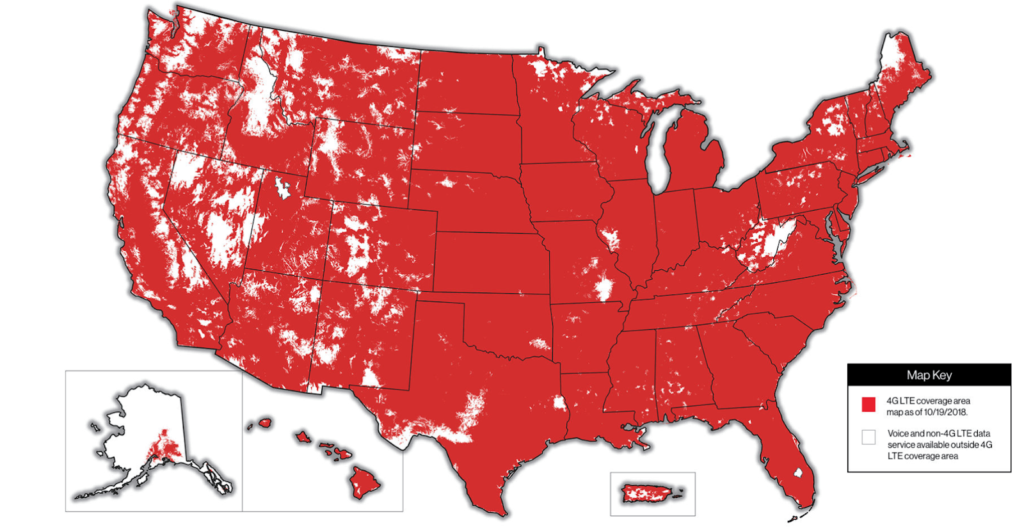 That’s a lot of red, and you’ll get access to all of it when you sign up for Visible Wireless.

The best coverage for most people

Verizon’s (and thus, Visible’s) network strength goes far beyond basic coverage. In RootMetric’s most recent “Review of the Mobile Landscape” report, Verizon dominates the other three major networks in nearly every category, from reliability and speed to data and calling.1

The company also tops many of the rankings in OpenSignal’s latest “Mobile Network Experience Report,” although T-Mobile is giving it a run for its money.2

Just keep in mind that, although Visible Wireless customers will get the reach of Verizon’s network, they won’t always get its highest speeds due to deprioritization.

We don’t know much, but what we do know says it’s okay. Just okay.

Visible is one of the newest MVNOs around, so there aren’t three trillion people complaining about the company’s service on the internet . . . yet.

But there is one metric we judge Visible Wireless by, and that’s its rating in the Apple App Store. The company’s app retains a 3.4 star rating after more than one thousand rankings.3

That’s lower than, say, the myAT&T app, which has 4.3 stars with 1.9 million ratings.4 But it’s better than the MyMetro app, which has 3.3 stars after about a thousand ratings.5

We’re going to take a tip from Visible and keep this part simple. Here’s everything you need to know about the company’s service in one short recap.

Visible Wireless came into the industry wanting to shake things up. While the company isn’t exactly revolutionary, it does offer a refreshingly simple, cheap, and useful way to get cellular service. If that sounds like the cell phone company you’ve been waiting for, then go ahead and sign up.