Our Rating
Our Rating
View Plans
https://www.reviews.org/internet-service/verizon-fios-internet-review/
We think you can’t go wrong with Verizon Fios internet. Read our review to see why we think its prices, internet speeds, and customer service are top notch.
August 4, 2021

While its prices and speeds vary depending on where you live, we think you’ll get a fair deal from Verizon Fios without having to sign an annual contract. Plus, it offers fully fiber internet and continues to expand its 5G and 4G LTE Home Internet options in other locations—including some cities where you can’t get Fios Home Internet service.

Looking for a Verizon Fios deal? Look no further.

Order Verizon Fios Home Internet 200 Mbps or 300 Mbps and get:

Order Verizon Fios Home Internet 400 Mbps or 500 Mbps and get:

Order online and Verizon will waive the $99 standard setup charge

Verizon Fios Home Internet gives you a handful of internet speed options to choose from, and we’re happy to see they’re all reasonably priced.

The reason for this is because the Internet 300/300 and Internet 500/500 plans are available only in limited areas of New York, New Jersey, and Connecticut. But if you don’t live in that area, rest assured that Verizon Fios will still hook you up with reliably fast internet speeds.

With Verizon Fios Home Internet, the only exception to the symmetrical, or identical, download and upload speeds is the Fios Gigabit Connection plan with up to 940 Mbps download speeds and up to 880 Mbps upload speeds. (This is a pretty common set of speeds for most fiber internet providers, so you’re not getting the short end of the stick.)

We usually like to see some low-cost, low-speed internet plans when reviewing an ISP. But we have to admit that the low starting price for the Internet 200/200 and Internet 300/300 plans make them a fairly reasonable choice for even a small family that doesn’t spend much time online.

You wouldn’t be paying much more for Verizon Fios Home Internet service than you would if you grabbed a lower-speed plan from another ISP. And with those speeds, you’ll be ready for almost anything—streaming Netflix in 4K, online gaming, or working from home—if the occasion arises.

Speaking of, Verizon’s 200 Mbps plan is on the cheap side compared to other 200 Mbps plans out there—and its cost is right in line with other internet providers you’ll see in the Northeastern US, like Xfinity and RCN.

This rings doubly true for Verizon’s Fios Gigabit Connection plan. We’ve seen plans with near-gig speeds like this one ring in at the tune of $100 or more each month. (Yes, we’re giving the side-eye to Spectrum.)

Notice, too, that other internet providers in the Northeast, like RCN and Xfinity, rope you into a contract and offer those promotional prices for only a year or so. While we can’t say that Verizon Fios Home Internet prices won’t go up, the fact that its fine print doesn’t spell out a timeline for those prices gives us hope that prices won’t keep climbing the stairway to heaven.

Where can you get Verizon Fios Home Internet 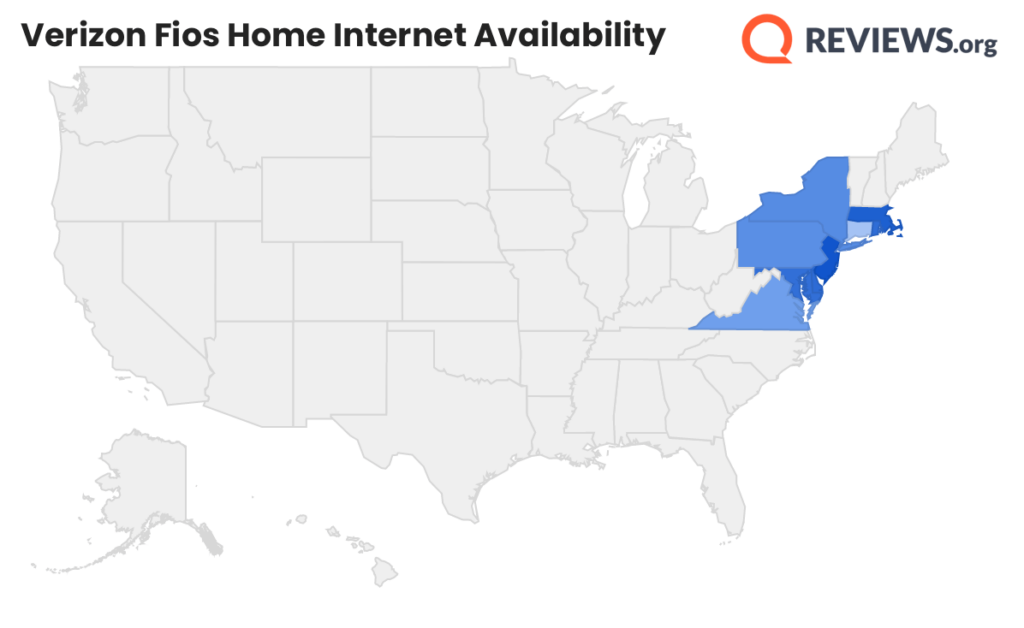 Data effective 11/16/2020. Availability varies by location and is subject to change.

Those symmetrical, or same, download and upload speeds are unique to fiber internet. And that’s a huge deal for videographers and photographers who upload a lot of huge files or for anyone who works with large files in their home office, for that matter.

Verizon Fios Home Internet’s speeds top off at up to 940 Mbps download speeds and up to 880 Mbps upload speeds.

That’s not as symmetrical as, say, 200 download and 200 upload, but you’ll see these speeds paired together with other fiber internet providers too. We’d say those speeds are close—and fast—enough that you won’t even notice that slight difference in download and upload speed.

But how do Verizon Fios’s download speeds stack up when it comes to actual web surfing? As it turns out, pretty darn good.

In our review of the fastest internet providers, Verizon Fios Home Internet earned a weighted speed score of 65.1 out of 100—just below the top-scoring Google Fiber.

What internet speed do you need?
Verizon’s got speeds that keep pace with even the fastest NASCAR drivers, but you might not need to spend as much on the fastest speeds possible if you only stream The Handmaid’s Tale on Hulu with your partner.

Check out our guide to how many Mbps you need to find out the right internet speed for you.

Verizon Fios Home Internet plans don’t spell out a data limit policy, so we take that to mean you can use the internet as you will. And unless you hear otherwise, you’ll be good to stream movies for your weekend date night or download patch updates for your game.

This is a big plus for file-sharing and (legally) downloading HD movies or online games. Sadly, the same can’t be said for for our friends who just got a new PlayStation 5 and blew past their Xfinity data cap while downloading all the games.

Verizon Fios doesn’t tack on surprise fees or lock you into annual contracts.

Along with no annual contracts, Verizon Fios’s prices don’t come with surprises.

That means no surprise monthly fees—you’ll just pay for your internet plan and equipment rental. (But if you grab Fios Gigabit Connection, your equipment fee is included too.) Even your installation fee is waived if you order your internet online.

This is probably the simplest contract, equipment, and fees review we’ve ever written for an ISP. We’d like to give Verizon Fios a standing ovation for keeping things simple.

Here’s one thing you should know about fiber internet: it uses something called an Optical Network Terminal (ONT) instead of a traditional modem.

The Verizon Fios ONT can be installed on the outside of your house or inside in places like your garage, a closet, or your basement. The ONT converts the light signals that fiber internet uses into copper and electrical signals your router can understand.

You also have the option to buy your router outright, which might be cheaper in the long run. (Some of the official Verizon Fios routers, like the G3100, go on sale on Amazon for cheaper than the Verizon buyout price.*)

On top of that, you can grab a Wi-Fi extender from Verizon too. Wi-Fi extenders are perfect for stretching your wireless connection to those hard-to-reach spots in a large house—or if your router has to sit in a far-away corner.

Here’s a quick look at the Verizon Fios router and Wi-Fi extender:

Service fees, who needs ‘em? We love that Verizon Fios doesn’t bombard you with handfuls of random service fees like some other ISPs do.

You might pay an installation fee if you don’t order online, and you may also pay a monthly equipment rental charge. But those are far more straightforward than something like a “Wi-Fi activation fee” or monthly charge to keep any service technician visits from blowing up your wallet. (Both of these service fees exist out in the wild. You’ve been warned.)

Verizon’s well-known for taking care of its customers, which is no small feat in the internet industry.

Most of us dread the thought of picking up our phone and calling our ISP. But Verizon Fios Home Internet earned top marks in HighSpeedInternet.com’s customer satisfaction survey.

A buddy of ours in Virginia swears by his Verizon Fios Home Internet service and recommends it to anyone who asks. He told us he rarely has to call customer service despite using the internet almost constantly (he’s a gamer and streamer). And when he does, he’s promptly taken care of, he said.

If you do need to get a hold of a Verizon Fios customer service rep, there are a few ways to do that:

Who it’s best for: If you’re sticking to a budget, you can still get fast enough internet speeds for multiple users to do regular work and even stream and game a bit.

Why we picked it: Our small household with a handful of devices and two serious gamers gets by just fine with 200 Mbps. And this price for the speed is right on target.

Who it’s best for: Is your house home to five or more people? Do you all like to stream movies, game, and maybe get a little work from home done on the side? Does a famous YouTuber live in your home? The Fios Gigabit Connection plan is pretty much made for you.

Why we picked it: We’ve seen far higher prices for near-gig speeds from other internet service providers. We’ve also seen slower speeds for the same price or more. That makes the Fios Gigabit Connection plan a bargain—but if you don’t quite need these speeds, the Internet 400/400 plan hits the sweet spot between price and speed too.

If you’re tired of pre-packaged internet and TV bundles, you’re not alone. We think the folks at Verizon Fios are also weary of one-size-does-not-fit-all bundles, because they created a way for you to mix and match an internet speed with the Fios TV service you want.

We picked the 400 Mbps Internet + Your Fios TV as a well-priced combo. But seriously, you can and should play around with your options when it comes to mixing and matching your Verizon Fios services.

We like pretty much everything about Verizon Fios’s internet service: fast speeds, decent prices that can include your equipment and installation charges, no annual contracts, and excellent customer service.

We do wish Verizon Fios Home Internet offered service in more areas of the US, but overall, we’re pleased with what it’s got going on.

Verizon continues to offer resources in response to COVID-19. You can read the latest news on what Verizon is doing to keep its employees and customers safe.

Look for Verizon Fios Home Internet plans near you.