But there are about 1,256,972 prepaid providers out there (give or take a few). So where should you start? Right here, that’s where.

If you’re just here to learn how to get the most data for the least amount of money, go and sign up for Mint Mobile or Visible Wireless. Or you can scroll down for our in-depth reviews of the four best prepaid carriers.

Out of nowhere, Mint Mobile announced its $30 Unlimited Plan and then everything changed in the prepaid wireless world.

Mint Mobile undercuts its closest competition by $7 a month for an unlimited plan. So whatever you’re currently paying for your unlimited plan, Mint Mobile will certainly cost less. And it’s not like Mint Mobile offers terrible service or anything, either.

Nothing is worse than losing service while you’re streaming a suspenseful episode of Serial to pass the time on your road trip. (Okay, there might be a few things that are worse than that.) So you’ll want a prepaid plan that has some reach.

On Mint Mobile you’ll be on T-Mobile’s network. That means you’ll get 4G coverage in about 62% of the country1. Check out how your area fares in this interactive map.

Coverage isn’t worth much if your data speeds can’t keep up with your data needs. Mint Mobile customers shouldn’t have too much to worry about, given that T-Mobile’s network has the highest average download speeds. Check out the graph below for average wireless download data speeds across the three major networks.

What exactly does 32.7 Mbps mean? It means your cell phone service will be about as fast as your home internet probably was a few years ago. You should have no problems streaming, gaming, and browsing.

Unless, of course, you’re being visited by the dreaded deprioritization ghoul . . .

The biggest drawback to going with a prepaid provider like Mint is the possibility of data slowdowns. In the industry this is called deprioritization, because the parent network (in Mint’s case it’s T-Mobile) will prioritize the data speeds of its own customers over those of prepaid customers.

Data deprioritization is most likely to occur at times of “congestion.”

If you’re trying to live stream the Jazz vs. Knicks for your buddies who couldn’t get tickets, you’re likely to run into some problems. And if you’re trying to stream an episode of The Witcher using a mobile hotspot, it could get laggy.

But most of the time, and in most metropolitan areas, Mint Mobile customers should get decent 4G LTE data speeds.

As we showed you above, Mint Mobile offers better and cheaper plans than the competition when it comes to midlevel data plans. But some people may want to go with a prepaid provider that runs on a network with even better coverage, like Verizon.

If that’s the case, we suggest checking out Twigby. This prepaid carrier has decently priced, midlevel data plans that will get you seeing full bars almost everywhere.

What about Verizon Wireless prepaid plans?
You may notice that we took Verizon’s $65 Prepaid Unlimited Plan out of this line up. While that plan was a data powerhouse, its price tag was just too high. If you want a prepaid plan on Verizon’s network, read our review of the best Verizon MVNOs.

A cheap unlimited plan on the best nationwide network

Visible Wireless is one of the newer mobile virtual network operators (MVNOs) on the scene (which is just a fancy way of saying it’s a prepaid carrier that uses another company’s cellular network). But this little youngster is a rising star.

What’s so great about Visible? Well, besides its cheap-as-heck unlimited plan, best in the nation coverage, and excellent “party pay” benefits, the company also sports a cool logo. Let’s jump into some of the specifics.

What’s rarer to find with your cell phone:

Okay, I honestly have no idea how rare a shiny Charizard is, but I can say with certainty that a prepaid plan with this much value doesn’t come around often. Visible Wireless gets you unlimited everything, and it costs $25 less than a comparable unlimited plans.

Visible uses the Verizon network, which makes this prepaid cell phone plan a cut above the rest. We’ve rated Verizon the best network for coverage, and its data speeds aren’t half-bad either. In case you’re curious, here’s how the power rankings go for the best networks.

Best networks based on 4G coverage 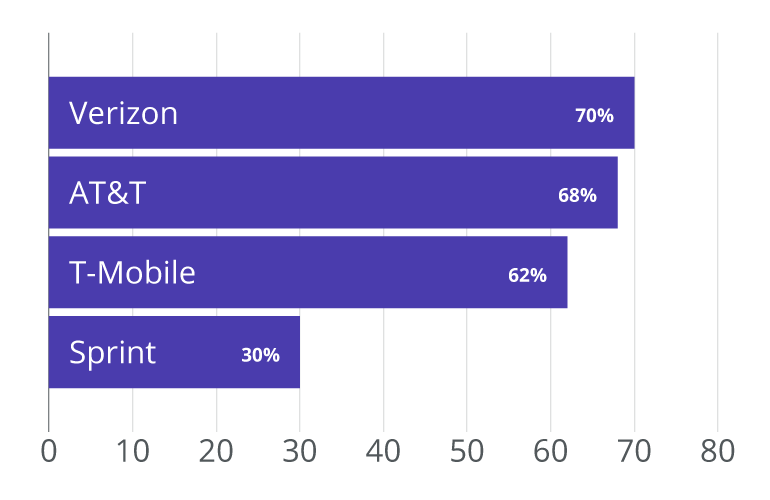 Check out the coverage map below to get an idea of what to expect on Verizon’s network. Let’s just say that friends should bring you in on their camping trips because of your ability to get signal bars with Verizon.

Verizon is the cool older brother, and Visible, unfortunately, is the kid brother that doesn’t get as much pizza.

The good news is that the Verizon/Visible pizza still tastes delicious no matter what size slice you get. In other words, the network still beats out Sprint, for example, even if you access it through Visible.

Is this analogy working?

Basically, if you’re surrounded by a bunch of Verizon users, your data speeds may slow down because the Verizon network favors their devices over yours.

Early customers of Visible Wireless were stuck with only a few choices when it came to phones—just newer iPhone models. But in recent months Visible has expanded its phone compatibility to include many Android devices and Apple devices from the iPhone 6 on.

But there are still plenty of devices that won’t work with Visible, so be sure to check your devices compatibility before signing up.

Of course, switching to a new provider is a great excuse to buy a new phone (“I had to buy this new 256 GB iPhone 11, honey. Visible didn’t work with my old iPhone 5!”). Here’s a peak at some of the most popular devices that Visible sells.

If you don’t like the sound of Visible, check out some other prepaid plans. Just remember, some of these plans may be cheaper, but that doesn’t mean they’re better.

Get the amount of data, talk, and text that you need.

Tracfone might be the cell phone company that your parents first used in the ‘90s, but the ‘90s are back in fashion, right? Seriously, though, Tracfone’s low-tech cell phone plans have something to offer folks who don’t need a ton of data.

Who needs an unlimited plan? Well, some people do. But your grandparents probably aren’t using Instagram all day, and your kids shouldn’t be. Tracfone’s cheap low or no-data plans could be perfect for either generation.

Take a look at these popular plans from Tracfone:

You might notice that Tracfone’s most popular plan is a bit . . . unconventional. It’s a yearly plan for $125 (that’s about $10.50 a month) with 1,500 minutes of data and 1.5 GB of data. But this is a perfect set up for someone who wants to call their family, use Google Maps every once in a while, and not deal with a bunch of bills.

Do yourself a favor and pay the few extra bucks for the unlimited talk and text.

As of right now, the plan with the most data available with TracFone maxes out at 3 GB. Data is life for many of us (or at least it feels like it is), and 3 GB won’t get us even close to our Pokemon Go and Netflix fix.

Check your data usage and think about how much you use in an average month. If you frequently use video streaming, mobile hotspot data, or play online gaming, this prepaid carrier might not work for you.

Sadly, you cannot get the latest iPhone and Android devices and expect them to work on your TracFone prepaid plan. As Liz Lemon from 30 Rock would say, “That’s a dealbreaker, ladies.” Well, for some of you.

Here are some examples of phones compatible with TracFone plans:

If you’re in the market for a new(ish) device, then Tracfone will sell you one. Here’s a gander at the company’s most popular offerings.

Sure, this lineup looks a bit like the cell phone version of a mid-2010s boy band (One Connection?), but they’ll get the job done.

Not feeling the vibe of TracFone? Here are some other budget-friendly prepaid phone plans.

It’s the best value for the whole family.

If there’s anything that families love, it’s shopping at Costco, sneaking candy into the movie theaters, and of course, getting a discount on wireless plans. Pure TalkUSA’s plans definitely seem to have families in mind.

Pure TalkUSA piggybacks off the AT&T network, which is a solid network. Our latest wireless data shows that AT&T has the slowest average download speeds (28.9 Mbps) of the three major networks, but it isn’t by much.

Will I have to worry about deprioritization?
As an MVNO (mobile virtual network operator), Pure TalkUSA is subject to data prioritization in congested areas. In other words, AT&T customers might get faster data than you because you share the same network.

Here’s a look at what AT&T’s/Pure TalkUSA’s coverage looks like around the country:

For a long time, Pure TalkUSA didn’t even offer an unlimited data family plan. But times have changed. You can now get the Simply Starter Family Plan with three lines for about $140 a month.

If that doesn’t look to you like a particularly great deal, that’s because it isn’t. If you want an unlimited data prepaid family plan, we’d suggest checking out Visible Wireless’s “Party Pay” option.

Stick to the Wi-Fi where you can
The problem of a low-data plan is that you need to find Wi-Fi wherever you can get it. But as long as your family uses the Wi-Fi at home, you shouldn’t have too much of a problem sticking to your data limit.

Here are some alternative family plans that probably won’t save you as much money but might get you some other perks.

There are loads of prepaid cell phone plan providers out there, and we’ve narrowed it down to the best of the best. Here’s a reminder of everything you need to know.

Prepaid cell phone plans can save you money if you like paying as you go rather than locking into a postpaid contract plan. Good on you for taking control of your wireless plan.

So, what prepaid service did you decide to go with? What’s your experience been like? Let us know in the comments below!