With tons of content, a cheap price tag, and premium features, Amazon’s streaming service is more than just an afterthought.

Watching shows like Goliath and The Marvelous Mrs. Maisel might just seem like the cherry on top of an Amazon Prime membership. But when compared with other on-demand streaming services, Amazon Video can hold its own. In fact, it’s among the best.

But there are some pitfalls that keep Amazon Video from being a complete cable TV alternative. For example, it lacks live TV viewing options, and its user interface can be difficult to navigate.

In this review, we’ll do a deep dive into Amazon Prime Video, from its membership pricing to its user interface, so you know what you’re getting into before you sign up.

How much does Amazon Prime Video cost?

You don’t have to be a Prime member to get access to Amazon Video (but you’ll probably want to be).

The most common way that people end up with access to Amazon’s trove of movies and television programs is by signing up for Amazon Prime. But there is another way.

Amazon doesn’t really promote it, but you can sign up for a standalone Amazon Video membership, which gives you access to the company’s video content but does not include the other perks, like Amazon’s famous, free two-day shipping.

*Plus any applicable taxes.

With less than a $5 price difference, Amazon is hoping that people will just opt for the full Prime service. It’s part of the company’s plans for world domin—I mean, selling more useful products.

The difference between the two memberships’ prices goes down to less than $1 if you opt to pay for a whole year of Prime up front. (Note that subscribers to the standalone Video service don’t get the option to pay upfront for a discount.) Now that’s a hard deal to pass up, even for a cynical technology reviewer. 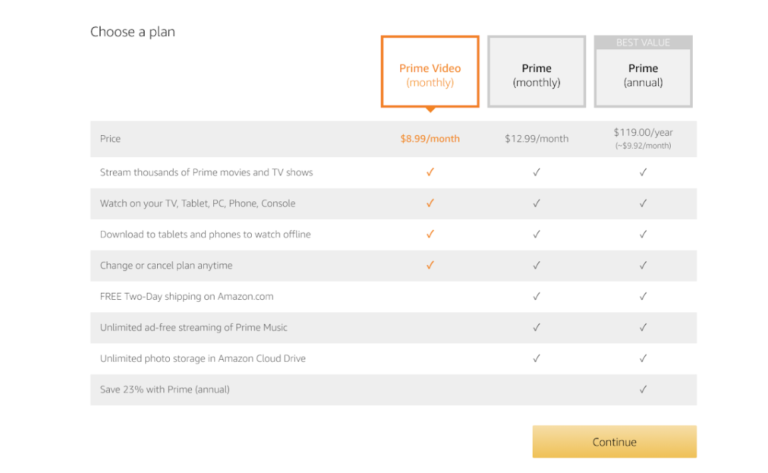 No matter which membership you end up with, your viewing experience with Amazon Video will be the same.

Speaking of Netflix and Hulu . . .

Amazon Video vs. Hulu vs. Netflix

Amazon Prime Video’s price undercuts much of the competition—which is not super surprising, given that Amazon tends to focus on growing its customer base over turning a profit.1

A standalone Amazon Video membership is the same price as Netflix’s lowest-level Basic plan. Actually, you could get a full-on Prime membership with video, shipping, music, and other perks for cheaper than Netflix’s Premium plan.

Hulu’s simplest, advertisement-filled package is cheaper than Amazon Video by a few bucks. But if you want to upgrade to a no-ads membership, the cost shoots up to a few dollars more than a standalone Amazon Video plan.

Unlike Amazon, Hulu does offer a live streaming TV package. But at $40 a month, it’s more than four times the cost of Amazon Video. Other live TV services like Sling TV and Youtube TV also cost significantly more than Amazon as well.

Offline viewing, 4K, and other perks

When comparing on-demand streaming services, it can seem like all of the platforms are basically the same besides the TV shows. But Amazon Prime Video is trying to change the equation by adding some extra perks.

For instance, Amazon Video is one of the first services (along with Netflix) to offer 4K HDR content. Most of Amazon’s original shows and movies are available in 4K HDR, along with some other titles.

Another perk we love from Amazon is called “First Episode Free”. It’s like the streaming version of the sample station at Trader Joe’s. Amazon has plenty of series in its archive that are only available for rent/purchase. For a lot of these series, the service will give subscribers the first episode for free.

But probably the service that most distinguishes Amazon Video is its downloadable content. At any given time, you can have up to 25 Amazon Video titles downloaded to devices like your phone and tablet. (So what we’re saying is, that five-hour airplane ride just got a lot better now that you can binge The Expanse.) 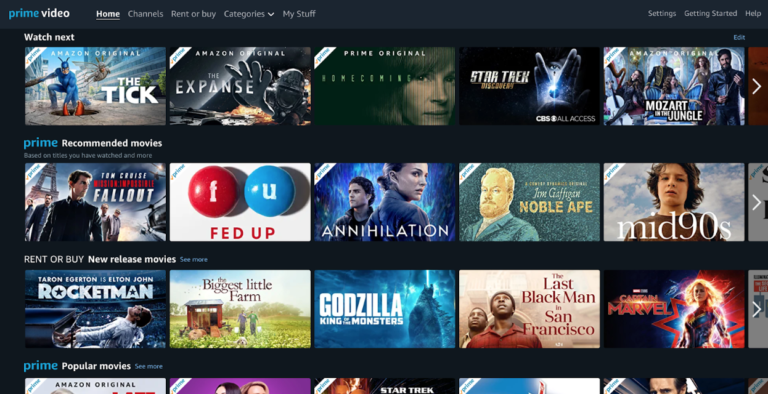 Amazon’s original content includes top-quality shows. Want to be pulled into a mysterious conspiracy with Julia Roberts? Check out Amazon’s Homecoming. Want to watch that goofy guy from The Office act like a serious action star? Amazon has the new Jack Ryan. (Ok, actually, the action seems pretty cool.)

Like all of the streaming services, Amazon Video seems to be bracing for Disney’s entry into the industry by investing in some series with major name recognition. In this case, it’s a forthcoming Lord of the Rings series that should be epic.

But Amazon doesn’t just have original content. In fact, the service is chock-full of hits that were produced elsewhere, like Mr. Robot, Parks and Recreation, The Americans, and The X-Files. Amazon has even snagged some HBO shows like Boardwalk Empire, Deadwood, and The Wire.

With this lineup, Amazon is definitely stiff competition for other streaming companies, and maybe even for traditional cable companies.

Half-hour television shows are great for unwinding before bed. But sometimes you want to break out the popcorn, invite a few buddies over, and throw a blockbuster movie on the widescreen. And Amazon Prime Video’s library has plenty to choose from.

While not all of these movies are what you would call A-grade (like The Biker Warrior Babe vs. The Zombie Babies From Hell), there are plenty of high-quality titles for everyone in the family (like Mission Impossible: Fallout, Clue, and District 9).

But it is possible to get live TV when you sign up for certain extra “channels,” like HBO or CINEMAX (more on that below).

If you do want to supplement your Amazon Video subscription with local, live channels, it’s pretty easy to buy a digital antenna for under $50. We recommend this HDTV antenna from, obviously, Amazon.

Most of these channels come with a seven-day free trial for Prime members, which is plenty of time to cram in all 63.5 hours of Game of Thrones (if you watch for nine hours a day).

Another perk that comes along with some Prime Channels is a “watch live” option. If you’re sick of trying to decide what to watch, you can just tune in to whatever happens to be on.

When it comes to watching your favorite team duke it out on the field (or court), Amazon Video can’t quite compete with other services like fuboTV. But there are signs that the service is trying to up its game.

Most people don’t know this, but Amazon has been in the live sports streaming business in the United Kingdom for quite a while.3 The company is just starting to get into live streaming here in the US with NFL football. You can watch live games every Thursday night through the 2019–2020 season with Amazon Prime Video.

You’ll also have access to some original sports content, like All or Nothing, which follows pro teams behind the scenes throughout their sports season. If you’re willing to shell out some extra money, you can also subscribe to channels like MLB.TV, PGA Tour Live, and NBA League Pass.

Instead of creating a sleek new interface (like Netflix’s), Amazon has lumped its video service into the same site as all its other services. You access Prime Video through the decidedly not sleek drop-down menu on the right side of Amazon’s site. 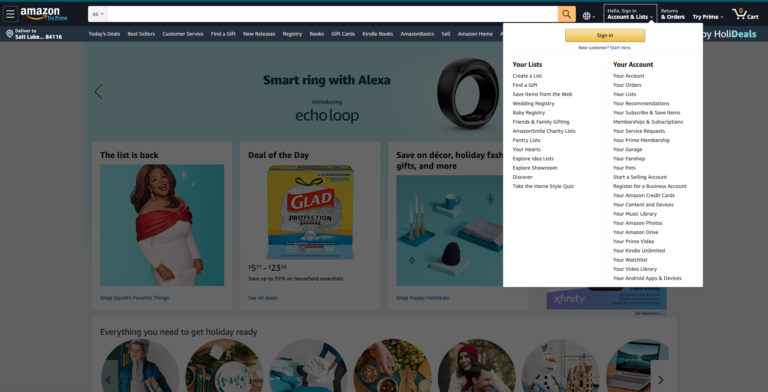 Once you get to the Amazon Video section of the site, things get a bit better. There are thumbnails for different shows and movies, organized by genre. Amazon tends to promote its original content prominently, much like Netflix and Hulu do.

But the most frustrating part of Amazon’s user interface is the search tool.

When you search for a title (or genre), Amazon will bring up a long list of shows and films. But not all of these films will be available through your Amazon Video subscription. You have to look very carefully to see if the content you’re clicking on is free or if it’s only available for rent or purchase.

While this isn’t a complete deal-breaker, it is very annoying, and adds to the perception that Amazon’s video services are designed to get you to spend more money on media and online shopping. (Sneaky move, Bezos.)

The Amazon Prime Video app will allow you to access your media library from almost any device (for a list of compatible devices, look below).

By far the coolest thing about Amazon’s app is that you can download content and stream it offline later. And not just an episode or two. You can have up to 25 titles downloaded to your device at a time—nice!

Recap: Is Amazon Prime Video worth it?

Amazon’s content and prices are dead-on, but the user interface is a bit underbaked.

Amazon is kind of like the IKEA of on-demand streaming services: it’s cheap and it has tons of content to choose from, but the layout is (perhaps intentionally) confusing to navigate.

Just know that Amazon Video falls a bit short when it comes to sports content and live TV. For this reason, it might be best in combination with a live streaming TV service or antenna.

That’s it for our Amazon Prime Video review. But we hope you’ll keep the conversation going in the comments section below. What do you like (or not like) about the service?