The Best TV Service for 4K

You can’t show off your 4K TV without something to watch, so we found the best TV services for 4K.
BEST 4K TV PROVIDER

Read Review
Available channels:
260
Monthly price:
$49.99–$104.99
View Plans
https://www.reviews.org/tv-service/best-tv-service-4k/
Make sure you know which cable providers support 4K content and channels before you invest in a 4K TV for your home. Read our full review.
January 27, 2018

4K TVs have been around for years, but finding 4K movies and shows can be a challenge. It’s a complaint we see more and more: “I have a 4K TV, but there’s nothing to watch.” Well, it seems pay TV services are starting to take notice. Three major TV services have stepped into the 4K market: DIRECTV, DISH, and XFINITY. These are all big-name TV providers, but you may be surprised how they’re handling (or fumbling) 4K content.

To find the best 4K TV service, we reviewed every TV provider that supports 4K, which is only three at the moment (DIRECTV, DISH, and XFINITY). The amount of 4K movies and shows available made up most of our criteria, but we also considered equipment and accessibility.

It makes sense to call DIRECTV the best TV service for 4K because it does more with 4K than any other TV service. The best example is DIRECTV’s dedicated 4K channel (channel 104), which plays 4K programming 24/7. It’s something no other TV service offers. So if you want to show off your 4K TV at your next party, you could just leave it on the 4K channel.

DIRECTV also lists its upcoming 4K programs online, which is something we couldn’t find with DISH or XFINITY. For example, we’re excited to check out upcoming NBA games in 4K, and it’s nice to know the exact time they’re on so we can get the DVR ready. DIRECTV even lists upcoming Premier League games and other special programming that will be broadcast in 4K.

What do I need to watch 4K on DIRECTV?

You need more than a 4K TV to watch 4K on DIRECTV. You need the latest Genie DVR (model HR54 or higher) and a DIRECTV subscription. If the 4K TV you’re using is not directly connected to the Genie DVR, you’ll need a 4K Genie Mini (a receiver) to connect it. The Genie DVR is already included in the monthly service price, but a 4K Genie Mini will cost extra.

What DIRECTV package do I need for 4K TV?

DIRECTV says “you need to subscribe to the SELECT TV package or higher.”1 The funny thing is the SELECT package is the lowest, cheapest package. In short, every DIRECTV package includes 4K. (For some reason, DIRECTV had to make this confusing.)

We made DISH the runner up, even if it feels like a distant second. You won’t find a dedicated 4K channel like with DIRECTV, but DISH does support 4K programming. DISH is currently promoting the 4K broadcast of Planet Earth II, but other 4K programming is limited to on-demand shows and movies (we didn’t find much).

Arguably, the biggest thing DISH has going for it is Netflix compatibility—Netflix has 4K available for most of its original programming. That means if you want to watch House of Cards, Stranger Things, Iron Fist, etc. in 4K, you can. The biggest plus is that the combination of DISH and Netflix just might get you more 4K shows and movies than anywhere else.

What do I need to watch 4K on DISH?

Besides a 4K TV, you’ll need DISH’s Hopper 3 DVR and a DISH subscription—it doesn’t matter which package you choose. If the 4K TV you use isn’t connected to the Hopper DVR, you’ll need to add DISH’s 4K receiver, the 4K Joey. It’s the same amount of equipment as DIRECTV, and it costs the same.

XFINITY has more customers than any other pay-TV service, so it must have tons of 4K content, right? Nope. This is straight from the horse’s mouth: “At this time, 4K content from XFINITY is only available to customers via the Ultra HD sampler app.”2

Huh? Well, the Ultra HD Sampler App is an app that’s exclusive to Comcast subscribers who own select models of Samsung or LG TVs. You read that right—it works only if you have the right model of TV and a Comcast subscription.

Trying to find any information on the Ultra HD sampler app, like what shows or movies are available, proved impossible for us. Between those of us who worked on this article, nobody met the requirements to use the app. Luckily, we were able to reach out to a customer who uses the UHD Sampler app who confirmed our suspicions: we’re not missing anything. There are currently only five shows available on the app: Superstore, Suits, Power, Outlander, and Hunters. That’s it. If you’re looking for 4K content, look elsewhere.

What do I need to watch 4K on XFINITY?

XFINITY makes you jump through hoops to get 4K. You need an XFINITY subscription, the Ultra HD Sampler app, and a compatible 4K TV. If you’re wondering what TVs are compatible, here’s the list.

You’ll want a high-speed internet connection along with whatever satellite or cable service you choose for 4K. You can find out more in “Best Internet for Streaming.” If you’re curious which internet providers are the fastest, you can also check out the “Fastest Internet Providers.”

What internet speed do I need to watch 4K?

We’ve listed the recommended minimum internet speeds for 4K from some of the most popular streaming services.

These are recommended speeds, but we think they’re a little too low. We’d recommend at least 30 Mbps as a rule of thumb.

Where can I watch 4K movies and shows? 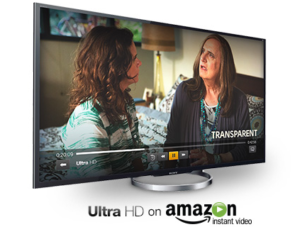 Did you know you can now subscribe to Amazon Video without a Prime membership? Try it out with a free 30-day trial.
Get Free Trial

If you’re looking for 4K movies and shows beyond paid TV, you can check out streaming services such as Netflix, Amazon Prime Video, YouTube, Hulu, and Vudu. Here’s a quick look at what’s available on streaming.

Netflix is making most of its original shows (Black Mirror, House of Cards, Stranger Things, etc.) available in 4K. Watching 4K content requires a premium plan, which is $11.99 per month. It costs a few more dollars than Netflix’s other plans, but you can also watch on up to four screens at the same time. (You would never want to share your login info with friends or family, right?). You can also find a decent number of movies in 4K, but because Netflix is constantly negotiating licensing for movies, the 4K selection (and the rest of the Netflix library) keeps changing.

Amazon Prime Video does its best to mirror Netflix, and that’s a good thing. Many of Amazon’s original programs, such as Transparent and Mozart in the Jungle, are available in 4K. Like Netflix, you can also find a handful of 4K movies to stream, but movies seem to constantly change.

Other streaming services, like Vudu and Ultraflix, offer 4K content as well, but they’re not nearly as popular as Netflix or Amazon. If you’re constantly craving 4K, it doesn’t hurt to check them out, but we think the best of what’s available in 4K is on Netflix and Amazon.

Can’t stream? Get the 4K disc

If streaming isn’t an option or you want to build up your movie collection, you can always go with a 4K Ultra HD Blu-ray. It’s not the same as a traditional Blu-ray, despite the name. A 4K Ultra HD Blu-ray is made for 4K Blu-ray players and supports 4K resolution, HDR, and Dolby Atmos sound.

Of course, if you go the physical disc route, you’ll need a 4K Blu-ray player, and they’re just starting to become more available. For less than $250, you can land yourself a 4K Blu-ray player that’s HDR compatible. (HDR stands for High Dynamic Range—it’s a big step forward in 4K technology that delivers seriously beautiful colors.) Samsung’s UBD-K8500 is arguably the best reviewed, most popular 4K Blu-ray player on the market.

What internet speed do I need to watch 4K?

Different streaming services recommend different minimum speeds. Given our experience and research, we say play it safe and go with at least 30 Mbps for your 4K TV.

We’ve covered some of the best and most affordable 4K TVs out there. Is yours one of them?

Are DIRECTV, DISH, and XFINITY really the only options for 4K TV content?

Yes. At least for the time being. If you primarily use streaming services like Netflix or Amazon, having a cable provider with limited 4K content may not be a deal breaker since both Netflix and Amazon offer decent 4K content.

If you want to know what other cable options are available near you, use our ZIP finder to get a full list of cable providers in your area.

Did we miss anything?

What do think is the best TV service for 4K? Do you agree with our picks? What’s been your experience watching 4K TV? Are you bummed by the lack of love/support for 4K TV?

If you have other questions or comments, let us hear them.