Windstream offers unlimited data and fast speeds in rural areas, but its customer service and location-based prices might give you a headache.
Recommended Plans

Our Rating
Our Rating
View Plans
https://www.reviews.org/internet-service/windstream-internet-review/
Windstream might be a great rural internet option for you. Find out about the perks, like fast speeds and unlimited data, plus some of the drawbacks to this DSL internet service.
July 6, 2020

Windstream is trying to bring reliable high-speed internet to folks out in the country. Though the company has had a rocky history, including filing for bankruptcy in 2019, it’s managed to build its network in rural areas from southern Texas to the Canadian border.

But if you have other rural internet options, how does Windstream compare? Let’s take a look at its prices, download speeds, contracts, and more to find out.

It’s hard to put a peg on Windstream’s prices since they vary drastically based on location.

Just like some other internet service providers (ISPs), Windstream’s prices depend on where you live.

Even some cities in the same state may see different prices for Windstream plans, so it’s best to check the Windstream deals in your specific area.

But to give you an idea of how Windstream’s prices pan out, here’s a look at what we found in Ball Ground, Georgia.

You may notice that two of Windstream’s plan names list a range of speeds. We’re not sure why these plans, in particular, have a range, but Windstream says it will tell you the exact speed range when you finish signing up for the plan.

More than likely, Windstream’s approach is similar to AT&T Internet’s: it tries to get your download speed as close to the maximum speed listed in the range. But certain factors are out of its control, like the condition of the wiring inside your home, how close you are to the network hub, and more.

How many Mbps do you need?
Need a refresher course on what Mbps are and how many you need? Check out our guide to Mbps and our recommendations for download speed.

Another thing to note about Windstream’s internet plans is that the advertised prices are promotional. They will almost always go up after 12 months. So take a careful look at that fine print. (To be fair, this is pretty common among ISPs.)

Windstream price comparison
Data effective 11/19/18. Offers and availability vary by location and are subject to change.
† For the first 12 months.
‡ New customers only. Rate requires paperless billing and excludes taxes. Additional fees apply.
^ Plus taxes, fees, and other charges. Price for Life. Customer must remain in good standing and up to date on bill payments to remain on Price For Life.
° For the first 12 months. Some packages require a 1- or 2-year contract.

On the other hand, if you can nab a Suddenlink 100, 200, or 400 Mbps plan, it’s a better deal. But Windstream’s Kinetic Gig plan offers the same speeds for less than the Suddenlink 1 Gig plan costs. So if you’re after as much speed as you can get, Windstream is the better choice between the two.

We love that Windstream is keeping the folks back home connected. To get an idea of whether Windstream is available near you, here’s a map of its coverage area plus a list of the states it offers service in. 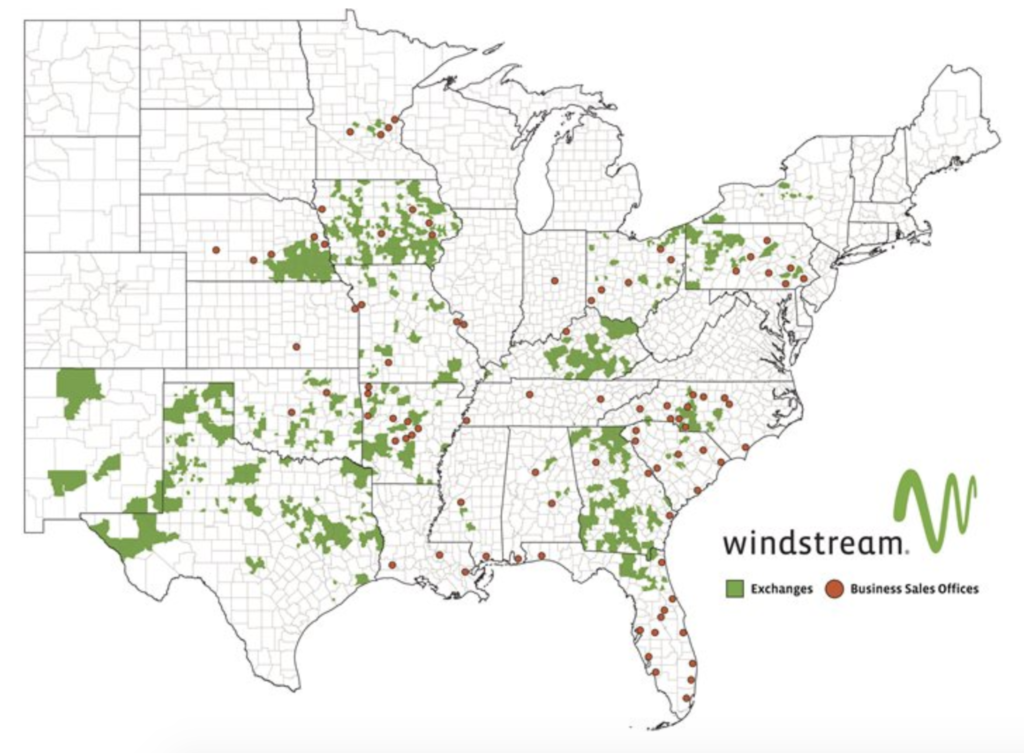 Windstream offers a variety of reliable download speeds, and its unlimited data is a real gem.

Windstream is DSL internet service, which runs through your phone line. And while satellite internet might be convenient if you’re totally off-grid, DSL internet can offer higher speeds and higher (in Windstream’s case, unlimited) data caps.

Here’s a look at the download speeds Windstream provides, which look great compared to the 100 Mbps download speed Viasat’s satellite internet currently maxes out at.

And if you’re lucky enough to get the Windstream Kinetic Gig plan, you’ll be surfing the web on fiber internet. (We highly recommend fiber due to its fast speeds and high reliability.)

More good news: Windstream scored an average of 95.6% on the most recent Federal Communications Commission’s (FCC’s) actual-to-advertised speeds report.2 That means you’ll usually get the speeds you’re actually paying for, though we’d like to see Windstream hit 100%—or higher.

Unlike CenturyLink and Xfinity, Windstream has no data caps. None. Ze-ro.

That’s stellar news for anyone who likes to download a lot of games or movies—or has to download files when they work from home. You won’t get a passive-aggressive email at 2:30 in the morning warning that you’re this close to meeting your data cap. And you won’t have to pay data overage fees or fork over more money for more data.

We prefer it when internet companies remove restrictions like data caps, so kudos to Windstream for doing just that.

Windstream’s fees are pretty standard, but we love that there’s no early termination fee.

Windstream internet comes with no contract, and we love to hear that.

That means you’re free to cancel your Windstream service any time you want without early termination fees putting a dent in your wallet that’s deeper than the Mariana Trench.

Still, keep in mind that Windstream’s advertised prices are good for 12 months. When month 13 rolls around, you will see a jump in your internet bill—and that’s never fun.

This is, unfortunately, a common practice for most internet providers. But there are a few that offer a price for life guarantee that says customers who pay their bills on time, don’t swap plans, and “remain in good standing” will pay the same monthly price for internet forever. You can read about CenturyLink’s, Suddenlink’s, and Optimum’s price for life guarantees in our reviews.

User reviews suggest that Windstream usually charges around $10 a month to rent a modem. That adds up to an extra $120 a year, and that’s about the cost of buying your own equipment.

Just be aware that “Windstream offers very limited support for broadband DSL modems not issued by Windstream.”3 (But we’ll help you set up your modem and router and troubleshoot internet issues with our guides.)

We love that Windstream published a guide to the charges you might see on your first bill. In a nutshell, here’s what to expect when you sign up for Windstream:

Windstream is known for lackluster customer service, but so is the rest of the internet industry.

Take a peek around the internet, and it won’t take you long to run into some angry Windstream customers. From no one answering the phone to random internet service disconnects, Windstream’s got a rap for some pretty bad customer service.

And the latest American Customer Satisfaction Index (ACSI) report matches the sentiment of Windstream’s disgruntled customers, scoring the ISP a 57 out of 100.4 That’s a failing grade if we ever saw one.

If you need to contact Windstream’s customer service, we have a few tips that might help you keep a clear head and not flip your desk while you wait on hold:

Who it’s best for: Small households who stream and game a little

Why we picked it: Windstream’s 50–100 Mbps plan will try to get you as close to 100 Mbps as possible, making it a great option for households of two or three people. Those 100 Mbps download speeds are even enough to rewatch The Walking Dead on Netflix or play a bit of Call of Duty: Warzone.

Data effective 3/24/2020. Offers and availability vary by location and are subject to change.
*For the first 12 months. Price includes $19.00 promotional credit.

Who it’s best for: Large families, small businesses, and gamers

Why we picked it: Buckle up for gig speeds. Your whole family—and we mean children and cousins and everyone—could stream simultaneously, and you’d still have some bandwidth left over. This plan could compete with any of the best internet plans for gaming, and we think it’s a great pick for anyone who works from home or runs a boatload of smart home devices too.

Data effective 3/24/2020. Offers and availability vary by location and are subject to change.
*For the first 12 months. Price includes $19.00 promotional credit.

If you live in a rural area, it can be slim pickings for high-speed internet. Windstream may be one of the better options in your area, but it’s definitely worth comparing its plans to those of competitors like CenturyLink, Suddenlink, AT&T Internet, and satellite internet providers.

Here’s a second look at what you might expect for Windstream internet prices.

Data effective 3/24/2019. Offers and availability vary by location and are subject to change.
*For the first 12 months. Price includes $19.00 promotional credit.