With transparent pricing, DISH is best for most everyone. But if you love football, DIRECTV scores a touchdown with NFL SUNDAY TICKET.

When it comes to satellite television providers, DISH and DIRECTV rule the roost. While other satellite providers are available on the market, these two providers stand tall against the rest. Let’s take a closer look at which satellite provider is best for your entertainment, sports, and movie needs.

If you’re a sports lover, DIRECTV is a top choice, thanks to NFL SUNDAY TICKET. But, DISH has the best DVR option with the Hopper, along with the best prices. Before you install a satellite dish on your home, keep reading this review to learn which option might be best for you.

How do DISH and DIRECTV compare?

Data effective 10/24/22. Offers and availability vary by location and are subject to change.
* For 24 months with a 2-year agreement and eAutoPay.
† For 12 months plus taxes & fees, w/24-mo. agmt. Autopay & Paperless bill reqd. Prices higher in 2nd year. Regional Sports Fee up to $11.99/mo. is extra & applies

How much are DISH and DIRECTV packages?

DISH blasts past DIRECTV, thanks to transparent pricing and no price hikes

At first glance, DIRECTV and DISH might appear to be neck and neck with pricing. But things quickly get out of hand when DIRECTV’s package prices increase during the second year of your two-year contract.

With that in mind, pricing is one of DISH’s biggest advantages. It’s not only cheaper in the long term, but you also get a little more for your money.

DISH scores major points for having the clearest pricing, but do its packages add up?

We think so. We’ll dive into DISH channel selection in a bit, but we think it’s pretty great that each DIRECTV and DISH package comes with ESPN, the Disney Channel, HGTV, and Food Network. Seriously, that hits all of our binge-watching needs—and your family’s too.

If you want more information on what the difference is between each DIRECTV package, check out our DIRECTV review. But in a nutshell, ENTERTAINMENT gives you your basic favorite channels, CHOICE gets you a lots of sports channels, ULTIMATE is perfect for movie watchers, and PREMIER is best for TV and film buffs, providing over 45 premium channels. And International sports fans are in luck with access to Fox Deportes and Fox Soccer Channel.

But if you choose DIRECTV CHOICE or above, you’ll be living the sports lover’s dream. You get a free season of NFL SUNDAY TICKET, which means you’ll get access to all out-of-market Sunday NFL games.

It’s a value of a few hundred dollars. So if you’re signing up specifically for the sports packages, it’s a nice bonus.

That’s one big auto-renewal cost you don’t want popping up out of the blue. So once the season’s over, make sure you cancel your subscription to NFL SUNDAY TICKET before it renews for next year. Or don’t, and spend $300–$400 for every Sunday NFL game. That’s not bad in comparison to a game ticket.

Do DISH and DIRECTV have a contract?

We’ve said it before and we’ll say it again—we really dislike DIRECTV’s price hike when the second year of your contract hits. Your bill will go up by almost double. So if you don’t mind dropping some exceptional sports coverage for a more straightforward monthly bill, we highly recommend DISH.

Don't forget about that satellite dish on your roof!

While DISH does provide a no-contract option, remember that satellite television requires you to install a satellite dish on your roof. So, while it might be easy to cancel service, you may still need to take the time to remove an unsightly contraption from your house or RV.

How much are the equipment, installation, and early termination fees?

Sadly, almost every service you sign up for comes with additional fees. DISH and DIRECTV are no exception, so make sure you budget for these costs.

How much do DISH's and DIRECTV's fees cost?

We’ll start by explaining DISH’s receiver fees because they can get a little confusing.

When you order one set-top box for your home, you’ll get the Hopper Duo (125 HD hours) with DVR service for $5 per month. You can then choose to upgrade to the Hopper 3 for an extra $5 a month.

It pays to have a big family because when you get the Hopper 3, you’ll get to enjoy 500 or HD storage hours.

The additional receivers you order for your child’s bedroom and TV room downstairs are called Joeys. Joeys are $5 per month each (except for the $10-a-month Super Joey.)

DIRECTV so kindly includes the Genie DVR (200 HD storage hours) with your plan, and it’ll cost $7 per month for each additional receiver.

Can you avoid early termination fees?

Maybe. We’ve put together a quick guide on how to avoid all those pesky fees when you’re ready to swap TV providers.

Which channels do DISH and DIRECTV have?

DISH features channels for every interest under the sun, but DIRECTV trumps all when it comes to an NFL experience

It can be hard to tell DISH and DIRECTV apart because they both have a well-rounded channel selection.

Which popular channels do DISH and DIRECTV have?

Which premium channels do DISH and DIRECTV have?

Both satellite TV services are comparable when it comes to premium channels.

When you order one of DIRECTV's packages, you'll get free subscriptions to HBO Max, Cinemax, SHOWTIME, STARZ, and EPIX for three months.

How much are DISH's and DIRECTV's premium channels?

Data effective 10/10/2022. Offers and availability vary by location and are subject to change.

You can also grab add-on packages with extra movie channels from both DISH and DIRECTV. This might save you some cash if you can’t get enough of all those premium channels and movies.

Which sports channels do DISH and DIRECTV have?

If you’re anticipating the next season more than an 8-year-old anticipates their birthday, it’s worth making sure you can view your games on DISH or DIRECTV.

Both satellite TV providers offer a pretty beefy sports channel lineup if you’re willing to pay for higher-tier packages—DISH even offers the NFL RedZone Channel if that’s your jam. But like we’ve mentioned before, DIRECTV is the only place you’ll find NFL SUNDAY TICKET.

Here’s a quick look at how DISH and DIRECTV compare when it comes to sports.

DISH has the following sports channels:

If you’re looking for the best satellite TV service during the NBA and MLB seasons, DISH is definitely our choice. DISH made our top providers list for the NBA season and the best way to get both NBA LEAGUE PASS and MLB Extra Innings.

DIRECTV has the following sports channels:

Does DISH or DIRECTV have the best DVR and equipment?

If we could choose only one DVR, it’d be the DISH Hopper 3 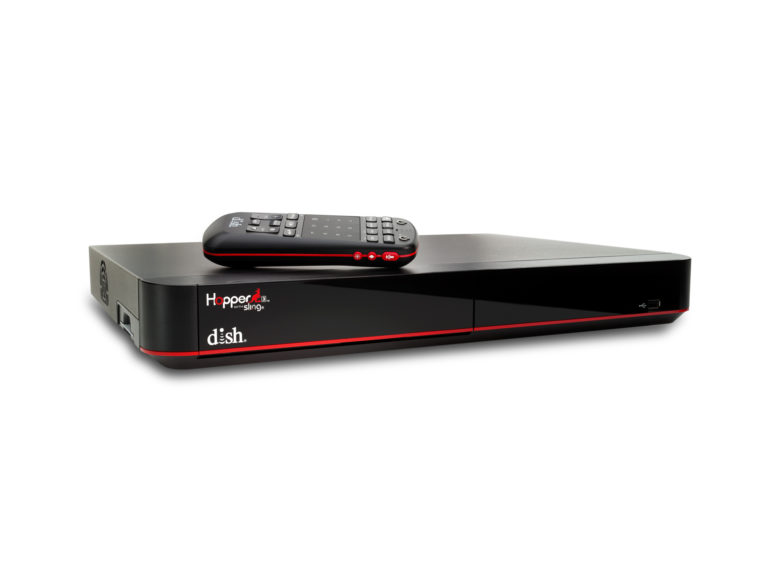 When it comes to DVRs, we look at HD storage space, the number of simultaneous recordings it can handle, and the price. Unfortunately for DIRECTV, DISH’s Hopper 3 DVR stomps the Genie DVR in the first two categories.

DIRECTV offers the main set-top box in the cost of service—which is nice—while DISH charges $5–$10 per month. A lot of providers charge a fee for the primary receiver, even though it’s basically necessary to use the service.

And we should also mention DISH comes with a voice remote, and DIRECTV allows you to download an app to use as a voice remote. Watch what you want within seconds with just a few words!

Those are some crazy-good specs. There are some notable differences in hardware, though.

You may think you’ll never need to record 16 shows at one time, and you might be right.

That’s the point, though—with the Hopper 3, you basically never have to worry about recording conflicts, whereas with the Genie, there’s a very real possibility that you may run into them. Recording conflicts are something you only think about when they crop up, and they can be very frustrating.

(Who wants to decide between the big game and the latest episode of Blue Bloods?)

The Hopper 3 also skips commercials automatically, which is the icing on top for us. That said, the Genie is still an outstanding DVR, so if you choose DIRECTV, you won’t be too far behind.

Recap: Which is better, DISH or DIRECTV?

We think DISH is best for most, especially if you’re on a budget and want to avoid mid-contract price hikes. But when it comes to NFL entertainment, DIRECTV is hard to beat.

Want to dig into the details? Check out our in-depth DISH and DIRECTV reviews.

Where is DISH service available?

DISH service is available nearly everywhere in the United States. In fact, if you can’t get DISH, we’re surprised.

This is because the satellite TV signal is routed from space. All you need is a receiver rather than complex cable infrastructure that other providers need.

Where is DIRECTV service available?

DIRECTV should be available basically anywhere in the United States thanks to its satellite technology.

There’s a popular notion that satellite is unreliable, but while weather-related interference is technically possible, you’ll only see issues during particularly heavy rain, snow, or hail.

Both DISH and DIRECTV advertise “99% signal reliability,” and that’s about what you can expect. That said, if you happen to live in an area that gets a lot of rain or thunderstorms, you might be better off with a cable TV provider rather than satellite TV.

Do I need to worry about weather interference with satellite TV?

Weather interference with satellite services is technically possible, but you’ll only have issues in extremely heavy precipitation. For the most part, your satellite signal will come in loud and clear.