Overall Rating 4.5 out of 5
Top-notch equipment
Full home automation options
Confusing equipment pricing
View Plans(833) 242-1876
https://www.reviews.org/home-security/vivint-smart-home-security-review/
Vivint is a big player in home security, but is it still top-of-the-game technologically? Find out if Vivint's smart home security system has all the features you want.
December 18, 2019

We used to think of Vivint as the champagne of home security systems. Sure, it has beautiful equipment and some cool technology, but the long contract and high bill every month made us think twice about the splurge.

But that was the past. These days, Vivint has flexible monitoring prices and financing options that make its feature-packed security system way more accessible. It’s a professionally installed system that still lets you get away with paying month-to-month (and at a reasonable price). Especially compared to ADT, Vivint is downright affordable.

Vivint’s monitoring plans basically let you choose what level of service you want, from just a simple security system to automated locks, lights, and garage doors.

If you like Vivint’s equipment, but you don’t care if your thermostat knows when you come home every day, then Vivint has a plan for you.

On the flip side, if you want security cameras on every eave and never want to touch a light switch again, you can do that, too.

You’ll definitely pay more for a Vivint monitoring plan (and equipment) than you would through a DIY company like SimpliSafe or Cove. But, honestly, compared to the other traditional security providers out there, Vivint’s monitoring prices are pretty mid-range.

If you want access to all the cool smart-home gadgets that integrate with the Vivint system, then you’re gonna need the Smart Home or Smart Home Video plan.

But good news for your wallet: even if you go the minimalist route and stick with the base-level plan, you still get the same Vivint equipment and access to the mobile app.

Top feature
We really like that Vivint still gives you access to the mobile app on its lowest-level plan. App access should be an automatic thing, but some companies make you subscribe to higher-level plans before they’ll give it to you. (Lookin’ at you, ADT.)

Vivint’s contract terms go up to five years. We know, we know, we’re scared of commitment too, and that’s a long time. But we have to give it to Vivint: it doesn’t make you sign a contract.

Most traditional security providers make you commit to around three years. But with Vivint, as long as you pay for all your equipment up-front, you can go contract-free if you want to.

Don’t get too excited about your contract-free life just yet, though. Keep in mind that Vivint’s equipment is expensive and that up-front bill is going to be a lot of money. Even if you get a super basic system— just a panel and a few sensors—you’ll be spending over 500 bucks.

Vivint designs its own equipment and is usually among the first to come out with cool new features we all want to try.

Most traditional security providers use the same equipment. Whether you go with Link Interactive, Protect America, or even ADT, you’re gonna get just about the same third-party stuff.

Don’t get us wrong; the third-party stuff is still good. It just means you can get it from anywhere, so why choose one company over another?

Vivint’s one of the few big security companies that designs its own equipment in house. 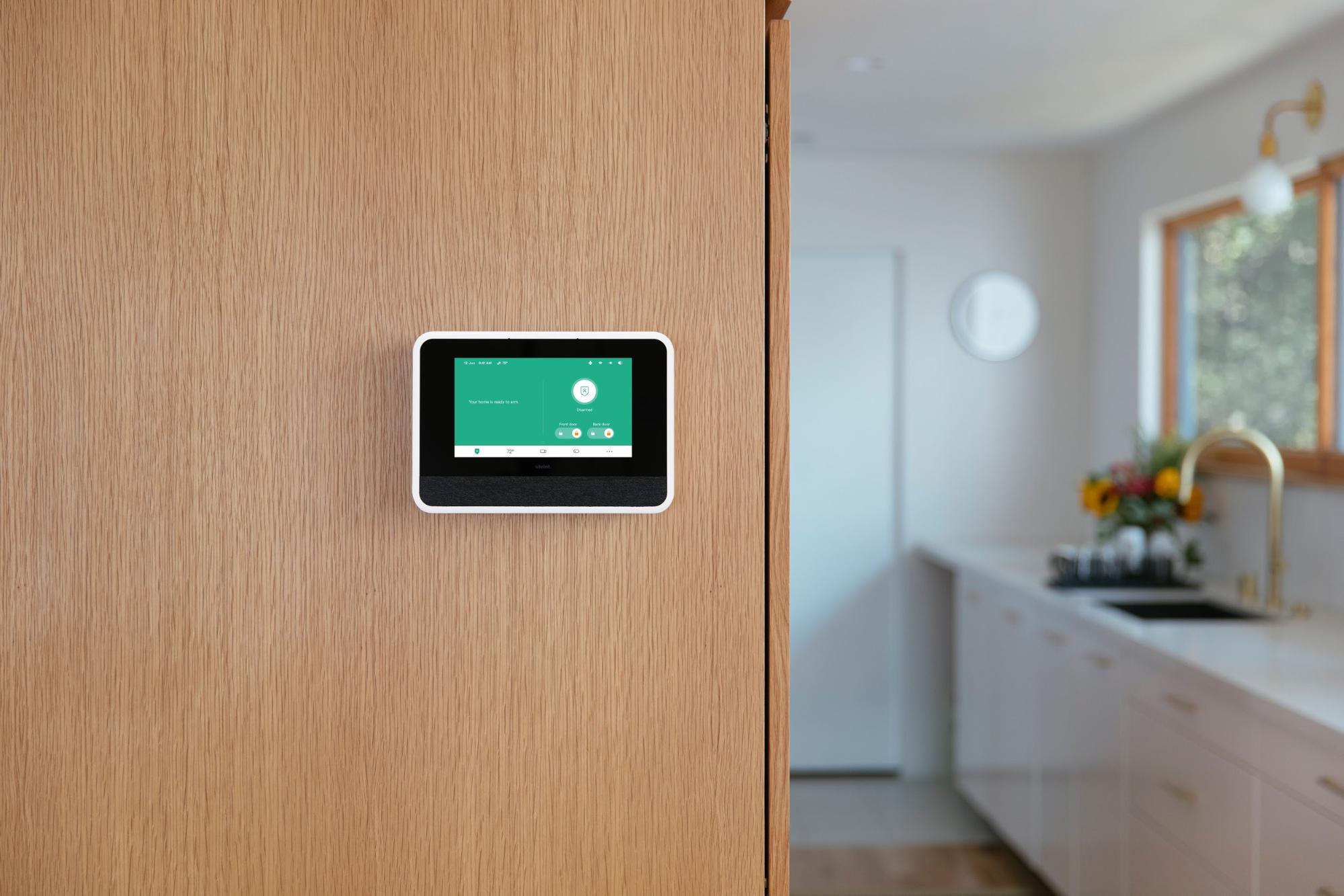 Vivint’s been one of the first (if not the first) to come out with some of our favorite security features, like putting an outbound call function in its Ping camera so your kids can call you from the camera to let you know they got home from school safely.

Vivint has all the standard stuff you need to keep your house safe from intruders, floods, fires, or even wayward toddlers. 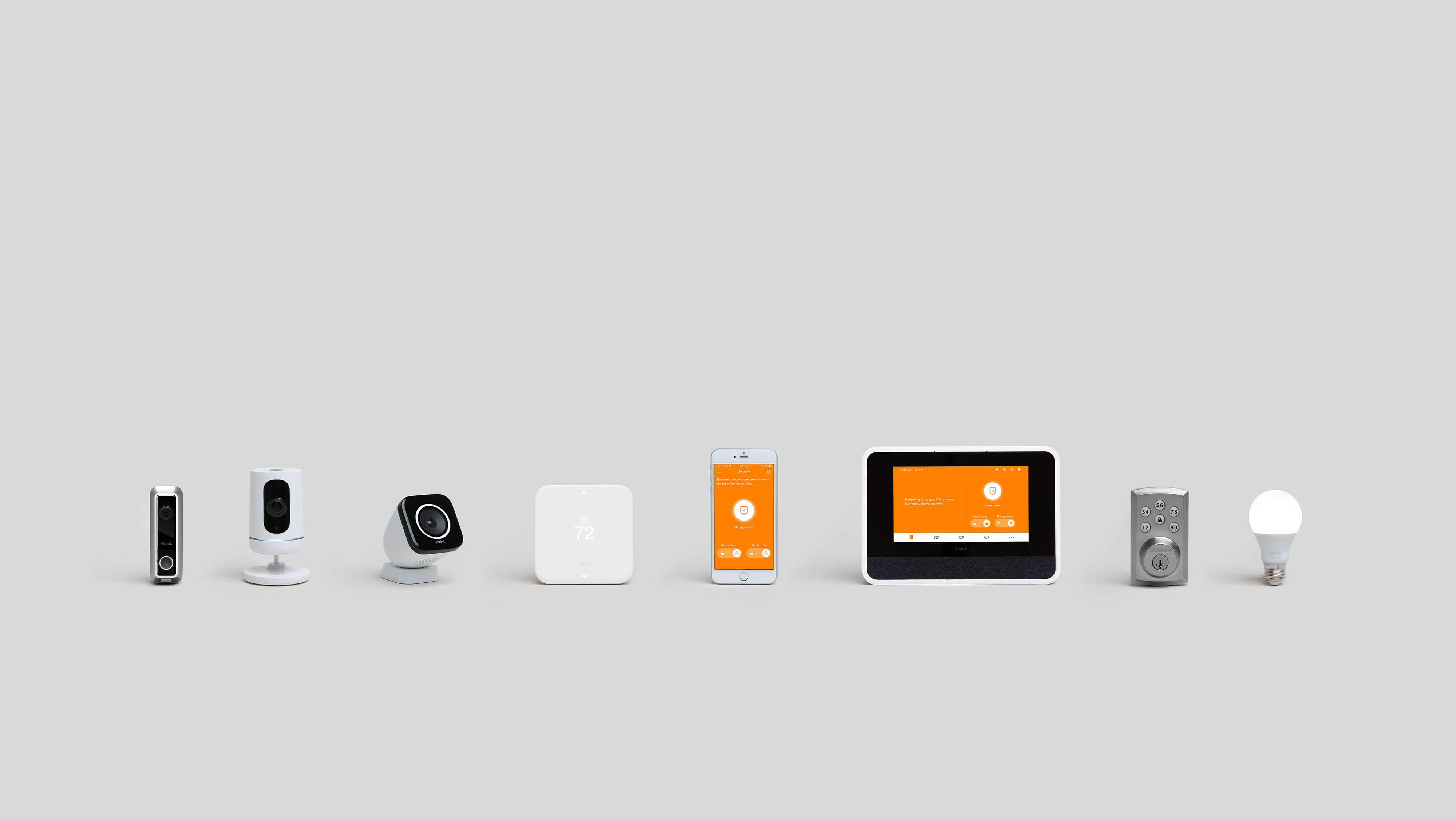 We wish we could give you prices for those baseline devices, but Vivint doesn’t put its prices . . . anywhere.

If you want to know how much your system’s going to cost, you’ll have to call in for a quote and, even then, you might not know the final price until your installation day. But plan on spending at least $599 for a base-level equipment package (or financing that cost over the length of a contract).

Vivint has indoor and outdoor camera models (plus a doorbell camera), so you’re pretty much covered if a surveillance fortress vibe is what you’re going for.

* Sold as a separate device 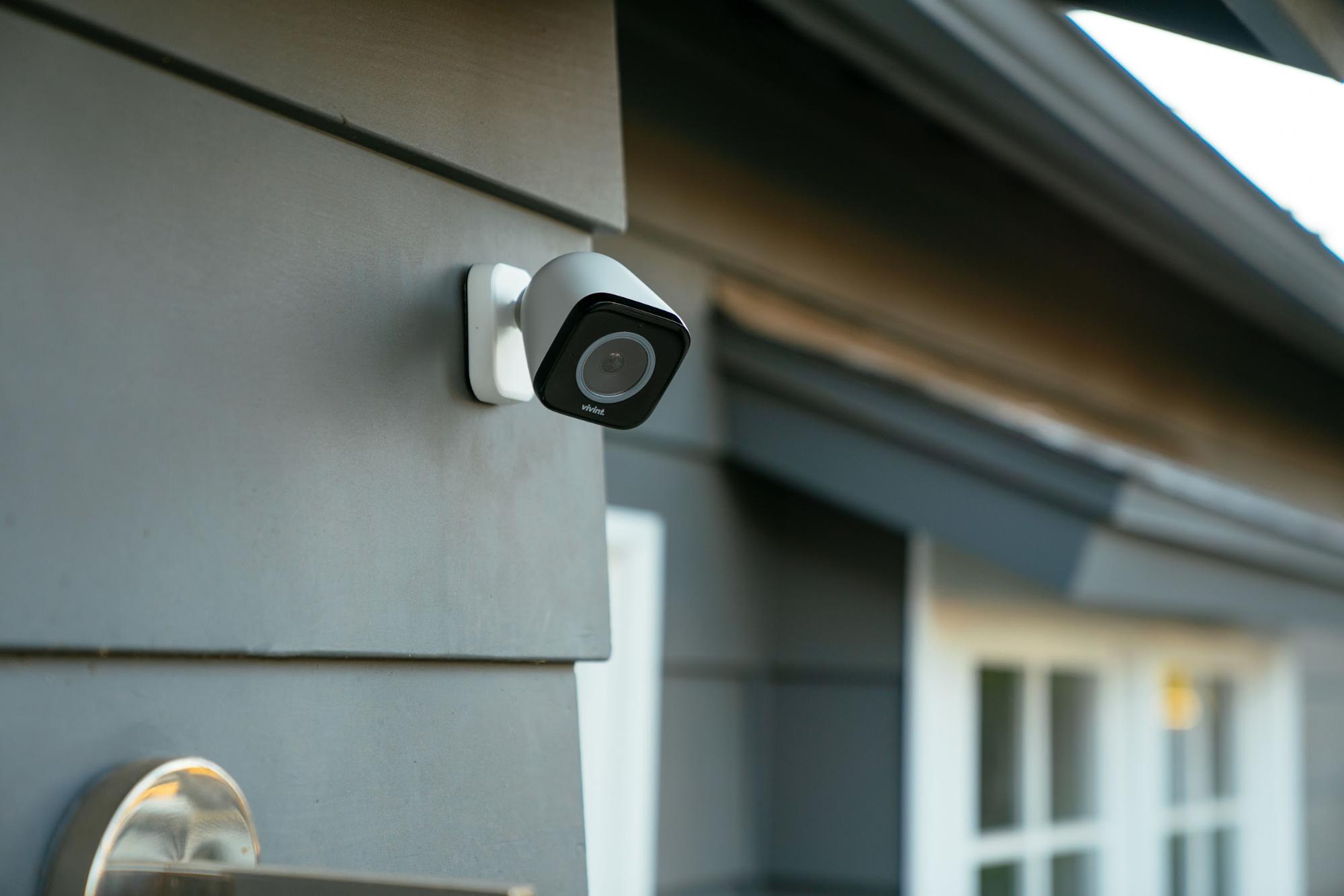 Vivint’s new Outdoor Camera Pro is its most impressive model yet. Similar to the Nest Cam IQ Outdoor, the Outdoor Camera Pro gives you a super clear HD view of whatever you point it at, and its 4K image sensor lets you zoom in really close on images and still see everything clearly.

Pro tip
Vivint lets you add up to six cameras with its Smart Home Video monitoring plan for an extra $5 per month per camera.

That’s a lot of cameras and, normally, that many would slow down your internet connection. But Vivint’s Smart Hub control panel streamlines the bandwidth the cameras use so you can have more cams with less slowdown.

The Outdoor Camera Pro also has “lurker detection” where it can alert you if it sees someone it doesn’t recognize. Plus, it has a “siren extender,” so if someone trips your security system, the camera will help sound the alarm and alert your neighbors. 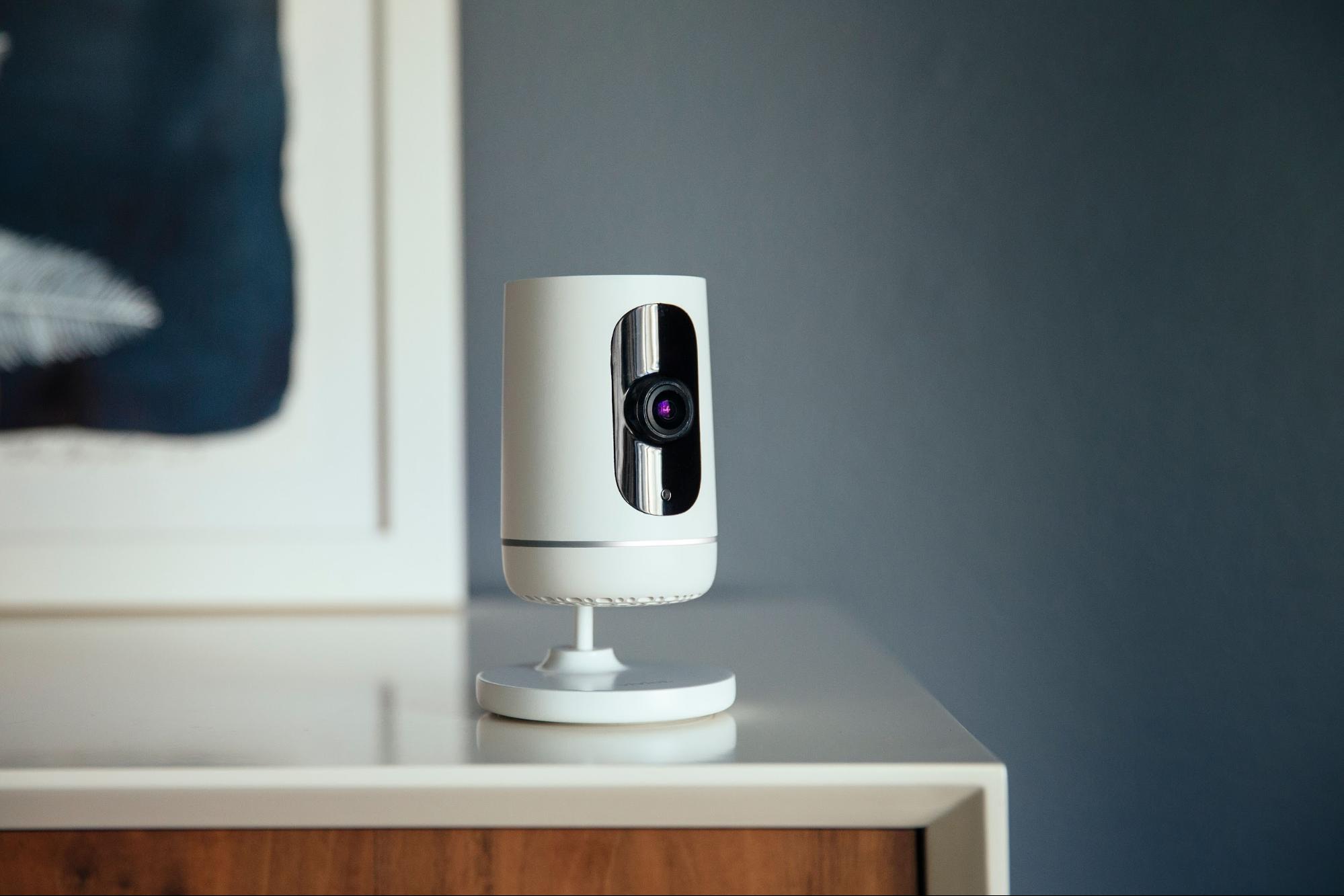 We didn’t even know we needed the Ping camera until it came out. If you have a nine-year-old who’s too young for a smartphone but old enough to stay home alone for a bit, then the Ping’s callout feature makes up for that landline you’ve never had.

Your kid just pushes a button on top of the camera and the Ping will call you through the Vivint app, so you can talk to them and also see what damage they’ve done to the living room. We think the Ping is also a great option for younger kids left with babysitters. Even if the babysitter doesn’t hand over their phone, your kids still have a way to contact you.

FYI
The Ping was the first indoor cam to have the callout feature, but now you can get something similar from other providers, like Link Interactive and Frontpoint. 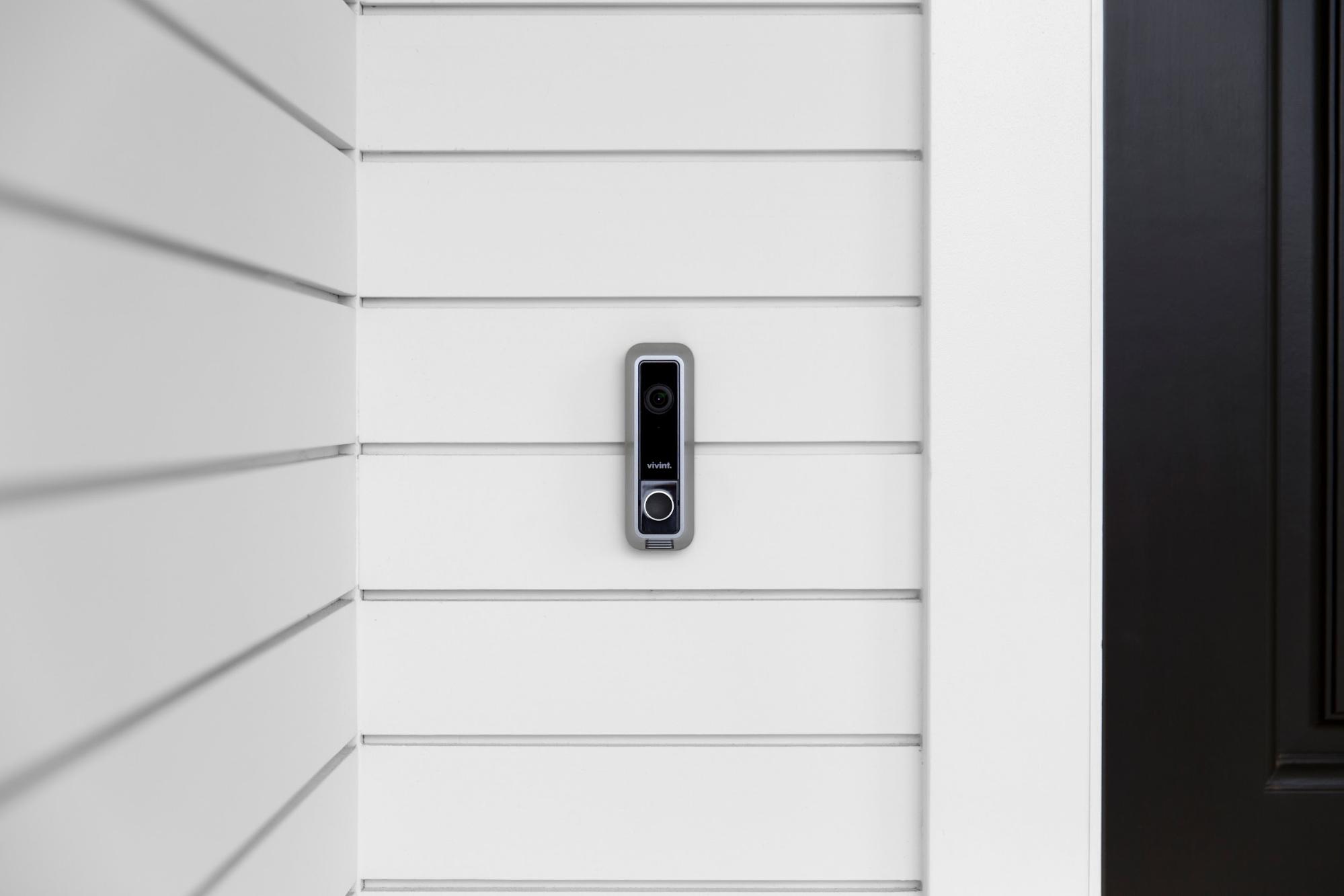 We don’t know about you, but we love a good doorbell camera. Greet visitors without leaving the couch, skip the door-to-door salesmen, and tell the delivery guy to put your Amazon package on the side of the house—doorbell cameras let you do it all.

The Vivint Doorbell Camera has (almost) OG status. It offered a doorbell camera before a lot of other traditional security companies hopped on the doorbell train. And Vivint’s model is still pretty good, although we’d like to see a resolution upgrade from 720p to 1080p.

Ah yeah, it’s Jetsons time. Okay, not quite yet—we still don’t have a robot maid. (We know, Roomba, you’re doing your best.) But automatons aside, Vivint makes it super easy to automate just about anything in your house.

Your system’s control panel uses Z-Wave, which is a radio frequency that lots of home automation devices pair up with. So along with the smart locks, smart outlets, and smart thermostats that Vivint sells itself, you can also add in a slew of third-party Z-Wave devices. Just check with a Vivint rep first to make sure your chosen smart thing will work.

Remember
If you want smart home functionality with your Vivint system, you have to subscribe to at least the Smart Home monitoring plan. That’s the one that costs $39.99 per month. 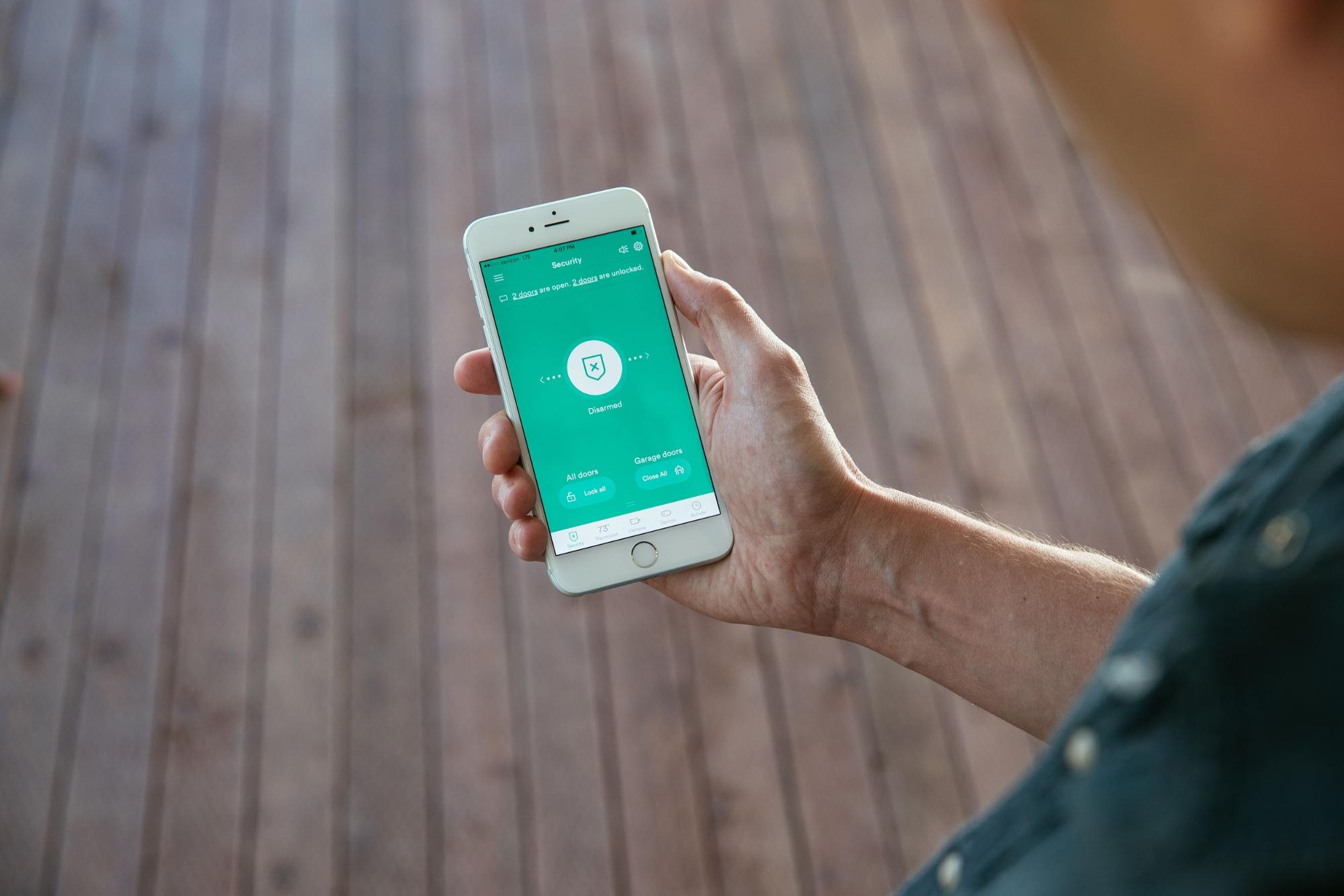 Vivint’s mobile app lets you do everything your control panel does but from anywhere. You can be sipping mojitos in the Bahamas and still see your camera livestreams and unlock your front door for the dogsitter.

If you’ve ever wished you could keep an extra set of eyes on your car—especially if you have a teenager who drives it—then Vivint’s new car monitoring device is a gift.

You can get Vivint Car Guard as an add-on to your Vivint system, or you can get it as a standalone device with a monthly subscription. Either way, you get a bunch of anti-theft, anti-vandalism, and anti-teenager features.

The Vivint Car Guard device itself costs about $200. If you want it as a standalone thing, you just have to pay $10 per month for access to alerts and the app.

What if I want more than one Car Guard?
Then you just pay an extra $5 per month for each additional device. Vivint also lets you finance the device if you can’t pay $200 all at once.

All of Vivint’s equipment is professionally installed. So you will have to work with an installation tech who will come to your house and set everything up for you.

There are some downsides to professional installation. You almost always have to pay an installation fee (usually around $100), plus it takes up a pretty big chunk of time out of your day. But at least you know everything’s set up correctly right from the get-go.

Heads up
You can add or remove equipment from your system on installation day, and you’ll work with the technician to come up with the final cost for the tech and monitoring plan.

Part of the technician’s job is to upsell you on equipment, so make sure you know how much you’ll end up paying before you sign on the dotted line.

Vivint’s had some customer service complaints on the record, but at least it keeps its support staff in house.

Vivint’s had some struggles with customer service experience. (Note that BBB rating.1) Most of the complaints we’ve seen have been around salespeople, specifically the door-to-door ones. Some customers have been left not understanding their contracts or what exactly they signed up for.

If you want a Vivint system, we recommend calling in over signing with a door-to-door rep. Just make sure you understand how much you’re paying and what kind of contract you’re signing (if any).

It’s also worth noting that, BBB aside, Vivint gets really great reviews on Trustpilot.2 Its reputation for customer support is definitely on the up-and-up.

We will say this for Vivint’s customer service—it’s done by actual Vivint staff.

That seems like it should be a given, but a lot of security companies outsource their customer service centers, so the person you’re talking to doesn’t even work for the security company.

Everyone at Vivint—from the installation techs to the customer service reps to the monitoring staff—actually do work for Vivint, which should makes things a bit more cohesive. If you went with a company like ADT, it’s really hard to tell who the person you’re talking to works for or who’s doing your installation. (Most of the time it’s not ADT itself.)

Vivint has excellent equipment, and its current plans include more affordable monitoring options than Vivint’s ever had before.

Vivint is a pretty fancy security system, honestly. It’s professionally installed, and its equipment and monitoring plan prices are still more than what you’d pay cheapies like Abode or SimpliSafe. But as far as traditional security companies go, Vivint is a solid choice for full home security and home automation.

Want to see some other options?

Don’t think Vivint sounds like your thing? Check out our reviews of these other home security systems.