How Does SimpliSafe Work?

SimpliSafe is a no-contract, DIY-installed alarm system that offers affordable professional monitoring plans so someone is always keeping an eye on your house. And that includes protection from things like fires, floods, and carbon monoxide leaks.

SimpliSafe has multiple types of sensors to detect everything from breaking glass to freezing temperatures. If you have a pipe about to burst or a leaky washing machine, then SimpliSafe can detect that and notify you.

You don't need Wi-Fi for your SimpliSafe system to work. The SimpliSafe hub has a cellular connection that can control your sensors and communicate with SimpliSafe's monitoring service. You can connect SimpliSafe to your Wi-Fi network as well, but it's not required.

How do you buy SimpliSafe?

You can order your SimpliSafe system online without making a single phone call, or you can call 1-800-541-3098 to speak with a SimpliSafe rep. SimpliSafe is transparent about what equipment it offers and how much everything costs. You can build your own system on the website, or choose a preassembled equipment package that has all the sensors you need. Add everything to your online cart, select which monitoring plan you want, and press the Order button.

No, SimpliSafe doesn't require Wi-Fi to work, although we recommend it. SimpliSafe's base station comes with a cellular connection that lets it talk to all your sensors and stay in touch with SimpliSafe's monitoring center.

You can still connect your SimpliSafe base station to your Wi-Fi network. And connecting to Wi-Fi lets your system receive updates faster and gives you one more layer of connection.

How does SimpliSafe monitoring work?

SimpliSafe is a professionally monitored system. That means you pay a monthly subscription price to have people whose whole job it is to keep a 24/7 watch on your system. If someone (or something) trips your alarm, SimpliSafe's monitoring service can dispatch emergency services for you.

We recommend the Interactive plan, because it gives you access to SimpliSafe's mobile app, and it lets you control your system with Alexa and Google. Check out Which SimpliSafe Monitoring Plan Should You Choose? for more info.

SimpliSafe has also started offering a paid self-monitoring plan for $9.99 a month. It comes with camera access, which makes it a whole lot easier to keep an eye on things. But it doesn’t have cellular backup, meaning that if your system fails, it’s down.

You can also just not pay SimpliSafe and use the free version of the app, but you won’t be able to do much with it.

What security equipment does SimpliSafe have? 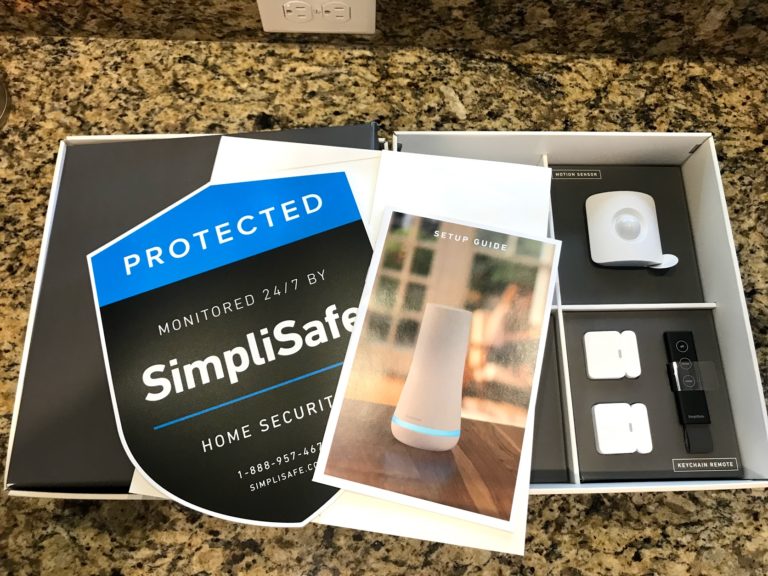 SimpliSafe has minimalistic equipment that will still look good in your house. You won't find touchscreen control panels or fancy smart home devices here, but SimpliSafe covers the basics quite well.

The basic starter kit comes with a base station, which is the hub that connects all the sensors together. You'll also get a keypad, which you'll use to enter your passcode and turn the system on and off. From there, you can add whatever sensors you need, including door and window sensors, motion detectors, glass break sensors, smoke alarms, and flood sensors.

Aside from basic sensors, you can add on accessories like key fobs, or upgrade your system with SimpliSafe's smart door lock and security cameras.

Plan to spend at least $229 on your SimpliSafe starter kit—and the price goes up with every sensor you add.

Unlike other home security systems, which can accidentally go off, one of SimpliSafe’s “smart” features is a glassbreak sensor that knows the difference between a window breaking and a toddler shattering your favorite Pottery Barn plate.

Also, SimpliSafe’s $99 Wi-Fi connected SimpliCam is the company’s first foray into the world of video—but we have mixed feelings about it. The camera is fine but it doesn't have the best features we've seen. Still, for the price, it's not a bad deal. Just know you'll need to pay an extra $4.99 per month if you want to do things like download video clips.

SimpliSafe also integrates with Alexa and Google. You can link the system with your favorite smart speaker and use it to arm your SimpliSafe system and check its status.

How does SimpliSafe’s DIY installation work?

SimpliSafe installation is extremely simple—a 10-year-old could it. All you have to do is plug in the SimpliSafe base station, activate the keypad, and follow the instructions on the keypad itself or on the SimpliSafe mobile app.

Plus, you don’t have to pull out the toolbox. SimpliSafe’s home security sensors have sticky adhesive on the back that lets you to stick the sensors wherever your heart desires—whether that be your bedroom window, front door, or liquor cabinet drawer.

Is there a free trial period for SimpliSafe?

There’s not a free trial period per se, but if you’re unhappy with your SimpliSafe system then there is a 60-day money-back guarantee with free returns. You don't even have to pay for return shipping.

Security comes in all shapes and sizes. Check out our in-depth reviews of the following security options: