Abode’s on-demand professional monitoring and DIY set it apart from traditional systems, but it doesn't have the best cameras around.

Overall Rating 4.5 out of 5
On-demand monitoring
Remote alarm trigger
Cellular backup costs extra
View Plans
https://www.reviews.org/home-security/abode-system-review/
Abode's security system has impressive smart home integrations and on-demand professional monitoring, but its equipment is expensive. Find out if it's worth it!
December 28, 2020

We think Abode Home Security (often stylized as “abode”) stands out for a few good reasons. Abode’s on-demand monitoring allows you to add 3-day, 7-day, or monthly monitoring—which is great for keeping the house safe while you’re on vacation without having to subscribe to a yearly professional monitoring plan.

Beyond that, it’s a straightforward DIY system that you can install and monitor on your own. It may not run as cheap as some other companies like iSmart Alarm, but it’s also not nearly as expensive as Vivint or Frontpoint. Abode home security is a favorite for renters, but we also think long-term homeowners will like that the system can be expanded and updated for years to come.

We love Abode’s smart home integrations, but its equipment is a tad pricey compared to similar systems. 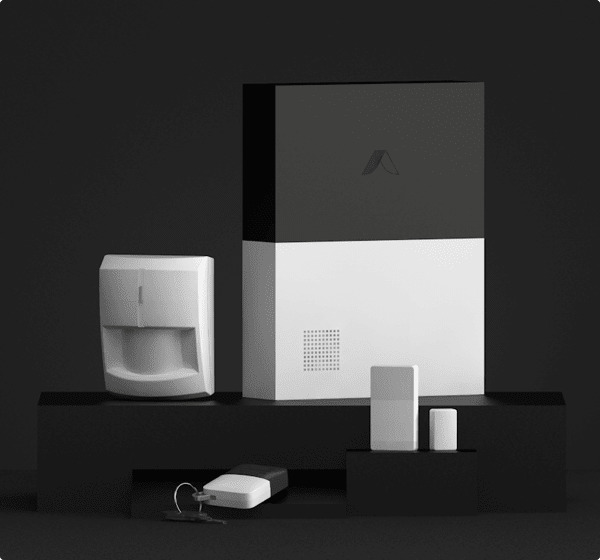 If you’ve heard of other DIY systems like SimpliSafe then Abode is not so different. Like SimpliSafe, Abode lets you order equipment online and then install it yourself. But whereas SimpliSafe just has basic home security equipment with very few smart home integrations, the Abode system is a home automation powerhouse.

To start out your system, Abode covers the basics with its Smart Security Middle package for $322. Or, you can upgrade to the Iota Kit Middle package for $382, which comes with a built-in security camera. (Abode often has discounts on both of these kits, so you’ll probably pay a bit less.)

What’s the difference between the Abode Gateway and Iota?

What’s a gateway? What’s a smart hub?
Consider a gateway or hub to be the “brain” of your system through which all other devices communicate. It’s your central station, your mainframe, your home base. These smart hubs are usually compatible with various technologies, and Abode happens to be one of the most inclusive of the DIY home security systems we’ve reviewed.

Abode unveiled a new smart hub with a camera in 2018 called the Iota. So if you’re considering getting one of the basic starter kits from Abode, just be aware that they come with the Abode Gateway and not the newer Abode Iota Gateway.

Abode has emphasized over and over that it will continue to support the classic Gateway model and you don’t need the Iota unless you want the additional features.

What are those additional features? Perhaps the biggest difference between Iota and Gateway is Iota’s camera, which makes Iota a nice all-in-one product—but that may not be a deal breaker, since you can get a cheap security camera for under $100.

Wi-Fi compatibility was highly requested for the gateway by customers, although we (and Abode) recommend Ethernet connections for their reliability, consistent speed, and security.  Both Iota and the original Gateway hub work with Apple HomeKit, Google Assistant, and Amazon Alexa, as well as Bose and Sonos smart speakers.

Abode sends alerts via mobile and email notifications. You’ll be able to verify through image or video whether you should alert the police or not. Abode can alert the police for you if you subscribe to the Pro plan.

The built-in backup battery lasts for 10+ hours, so if the power goes out and someone thinks they can get to your collection of valuable dolls (or action figures, if you’re touchy about the subject), you’ll still be able to catch them in the act. If you want 4G cellular backup for your system, which ensures you’ll stay connected even during Wi-Fi or internet outages, you must subscribe to the Pro plan.

Abode has tons of smart home integrations, including the IFTTT app and Z-Wave and Zigbee protocols. It also works with a bunch of different smart home devices, including Amazon Alexa, Google Assistant, Apple HomeKit, Bose, and Sonos.

Both the Abode Gateway and Abode Iota connect all your devices together (home automation included) and also have USB ports for expansion, so they’ll stay compatible with the latest technologies.

Abode is compatible with Z-Wave and Zigbee technologies, meaning it will act as a smart hub for pretty much any smart device. And on top of that, you can integrate IFTTT recipes. Basically, Abode works with everything you need in the land of home security and home automation. 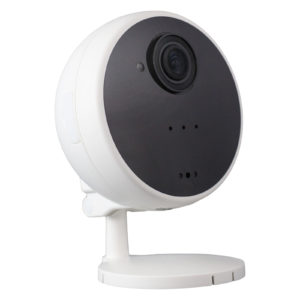 Iota works as an all-in-one security camera and gateway. You can integrate Abode’s other cameras, as well.

We do like that the motion detector has a built-in camera because it allows you to verify what’s happening in the room rather than assuming the worst when your cat knocks a picture of Aunt Gertrude off the shelf. Just keep in mind the resolution is a measly 480p. (That’s DVD quality.)

Abode doesn’t require a consultation with an agent or technician, and you can always expand your system. We were able to set up our system in under 20 minutes, if you don’t count user error.

Everything requires minimal effort to install: by using double-sided adhesive tape, users can easily put up and take down the system. It’ll take less than hour for sure—a half-hour if, unlike us, you’re focused and decisive.

Pro tip: Get better tape!
We recommend getting better double-sided tape if you’re going to use the motion sensor in the corner. Our motion sensor fell a couple of times, which ended up triggering a tampered status on the app—no bueno. It was a simple fix, but you can avoid it altogether by getting some strong tape you can pick up at the hardware store or on Amazon.

You’ll always get alerts directly to your phone, device, or email from Abode before a false alarm is triggered. This is nice for knowing if you should be worried about a burglar or if it’s just your neighbor Raymond who decided to borrow some sugar by climbing through the window (just go to the store, dude!).

If you see something suspicious through one of your security cameras, you can also trigger your Abode system remotely. If you trigger the system remotely, you can set off the siren or keep things silent. And Abode will dispatch emergency service and then call you to confirm the alarm. (Usually, it’s the other way around.)

Keep in mind that you need to be subscribed to the professional monitoring plans before Abode will summon the police or an ambulance for you. If you don’t have pro monitoring, triggering your alarm remotely will notify all of your listed contacts so that they can call for help.

Abode is one of the best DIY security companies to buy equipment from because it doesn’t require a subscription to use the app features that make it work well in a mobile world. In other words, you don’t have to pay $10 or more per month just to use the app.

Right now, you can get the Abode Smart Security Middle package for about $322, which is cheaper than Google Nest (although not as cheap as SimpliSafe).

Abode strikes a balance between the feel and look of a higher-end system, but without having to pay a subscription fee to use the mobile app (which SimpliSafe does).

The basic plan, which lets you self-monitor from the app, is included with your purchase. Keep in mind you don’t get any timeline or media storage with the Basic plan, so you can’t go back to review any incidents that happen.

Abode’s most unique feature is on-demand professional monitoring plans. You won’t have to fork over a year’s worth of money if you plan on being gone for only a little bit here and there. This is a great feature for anyone who mostly wants to self-monitor their system.

Professional monitoring available in 3-day or 7-day plans
On-demand monitoring is unique to Abode. No other home security company lets you get professional monitoring for less than a month at a time. This is great for those who want backup when they’re gone fishing, or just when they might be too distracted to pay attention to their phones (happens to us a lot).

If you want the pros to watch your system for you all the time, then you’ll need to subscribe to the Pro plan. That’s the on that gives you 24/7 professional monitoring (for $20 per month).

Abode doesn’t require contracts. You can pay for your monitoring plan month-to-month and cancel whenever you feel like it with no penalties. That said, you’ll save money if you do subscribe for an annual, rather than a monthly, plan. The annual plans will save you some money per year over the monthly options.

If you want smart home support and flexible monitoring then Abode is a solid choice for home security.

Abode’s on-demand monitoring is its standout feature: you can use the app all you want on your own, then if you leave on vacation, you can add professional monitoring that will alert the police while you’re away, in 3- or 7-day plans.

We like that Abode doesn’t require a subscription for app access, which can be costly for those who want an inexpensive DIY system. We’re also fans of the overall ease of use with Abode—everything from installation to setting up custom alerts and automations went smoothly and didn’t have us pulling out our hair.

Plus, we can take it with us to any new residence without leaving holes in the walls. And you can always expand the system because it’s compatible with major home security technologies (Zigbee, Z-Wave, and IFTTT) and digital assistants (Google Assistant, Amazon Alexa, and Apple HomeKit).

If you like Abode but aren’t quite sure about buying yet, compare it to iSmart Alarm, SimpliSafe, Scout, and more in our Best DIY Home Security Systems or Best Security Systems for Renters.