A recent advertising push from Vodafone sells the telco as “The #1 Global 5G Network”, but is that really the case?

“Vodafone: The #1 Global 5G Network.” That sure is powerful phrasing. If you’re a cricket fan like me, you’ve been bombarded with that Voda claim, given the recent Vodafone Men’s Ashes series. As the major sponsor of the tournament, it’s impossible to not notice the Vodafone 5G mantra, either in billboard form or with ads reinforcing this claim.

Check out an example of one of the ads below.

Is the Vodafone 5G network really the number-one global network?

As it turns out, Vodafone is the number-one global 5G network… but only in a way that doesn’t really translate to anything meaningful for users in Australia. If you watch the 30-second Vodafone ad above and pause it at eight seconds in, you may notice disclaimer text at the bottom of the screen. It’s a little tricky to see given the white font on bright backgrounds, but while the big red-bubble text repeats the “#1 Global 5G Network” claim at the top of the screen, the disclaimer text reads: “#1 Global: 5G presence in most number of countries”. Wait, what? That’s it?

Apparently so. According to Vodafone, this claim to having the number-one global 5G network amounts to having a 5G presence in 15 countries around the world, including the UK, Germany, Spain, Italy, New Zealand and, of course, Australia.

The video ad above goes on to say that the Vodafone 5G network is “in Australia, [Vodafone’s] best network yet”, which doesn’t speak to how it compares with the Telstra 5G network and Optus 5G network. Towards the end of the ad, Vodafone notes that its 5G network is “rolling out in selected areas of major [Australian] cities.”

Because Vodafone’s 5G country count doesn’t mean a whole lot to Australia, and because there’s some key stuff to dig into from the rest of the ad, let’s look at how it fares in terms of meaningful 5G metrics.

How big is the Vodafone 5G network?

Comparing 5G networks in Australia is a bit tricky because, unlike 4G networks that deal in percentages of the Australian population, each of the three network owners uses different metrics to measure the reach of their respective 5G networks:

For comparison, check out these three 5G maps below. First up is the Telstra 5G map, with a view of 5G coverage over Sydney. 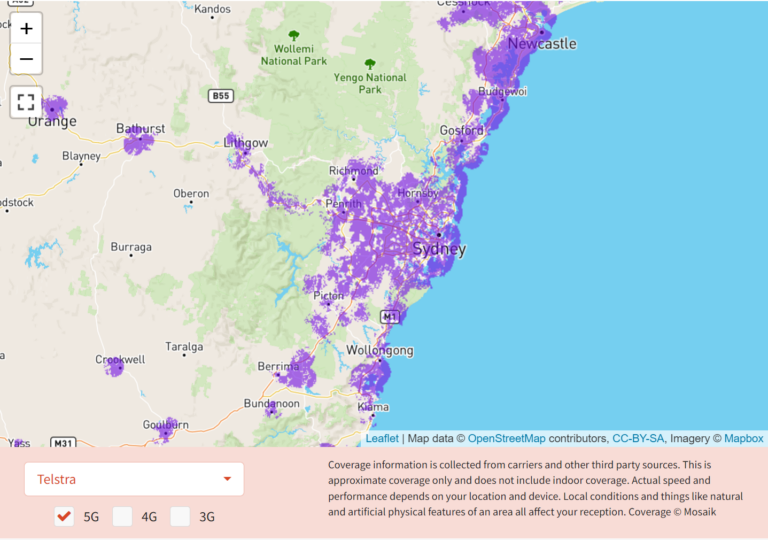 As you can see, that’s quite a lot of purple indicating where you can expect to have 5G signal on the Telstra network (assuming you have a Telstra 5G plan and compatible 5G handset). Next up is the Optus 5G network, with the exact same view over Sydney. 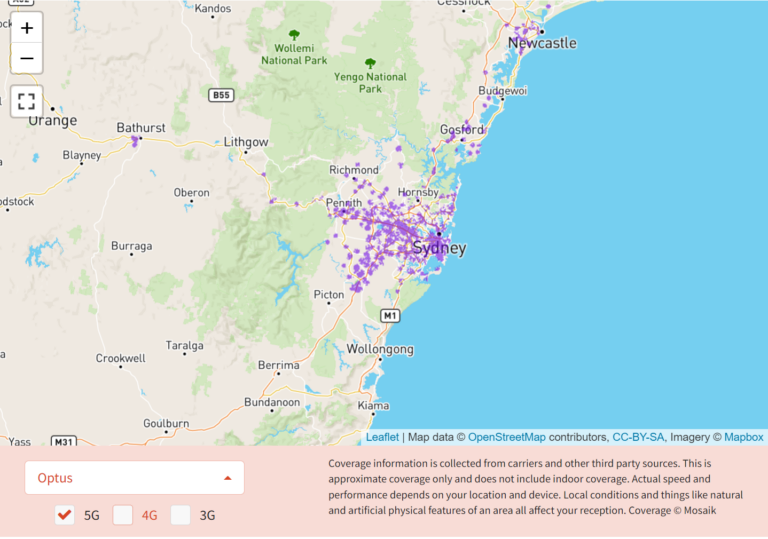 That’s a whole lot less purple to indicate Optus 5G coverage, with the majority in the Sydney and the Greater Sydney area, plus a smattering in Gosford, Budgewoi, Newcastle and Bathurst. Finally, here’s a look at the same view above Sydney of the Vodafone 5G network. 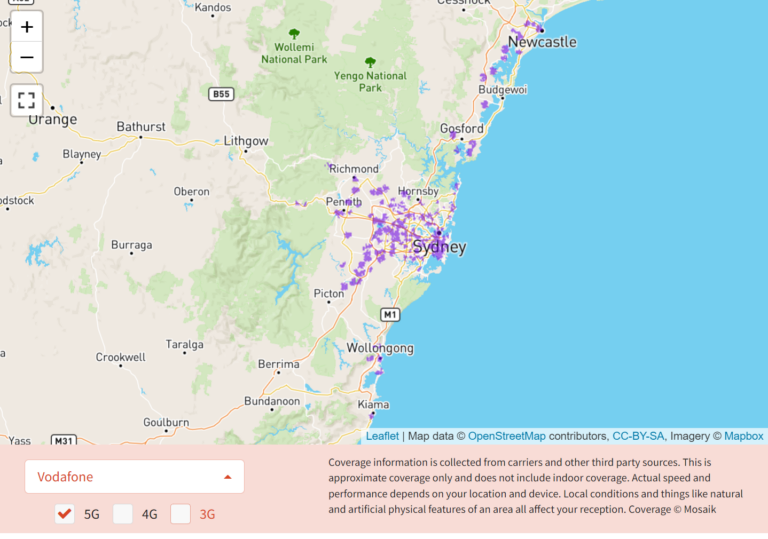 At first glance, the purple looks similar to Optus 5G. But upon close inspection, you’ll notice Optus has more purple throughout Sydney and the Greater Sydney area. That said, while Bathurst has no Vodafone 5G coverage, Wollongong and Kiama do have 5G but the Optus 5G network isn’t available in those areas.

Still, the bottom line is if you’re after 5G coverage in Australia, your best bet is the Telstra 5G network.

Which 5G is available in my area?

Use the interactive map above to find out which 5G network (or networks) is available in your area. Select either Telstra, Optus or Vodafone from the drop-down menu, then ensure that only 5G is ticked. Position the interactive map view over your area and look out for the dark purple colour to indicate 5G coverage.

Living, working and/or playing in an area that has 5G coverage is obviously the first step to tapping into the perks of the latest-gen mobile technology, but those perks are measured in speed: namely, upload, download and latency. On paper, 5G has the potential to reach download speeds of around 1000Mbps, upload speeds of roughly 100Mbps and latency as low as 1ms.

Our friends at WhistleOut ran 5G tests across the respective networks in Sydney during certain months of 2021 and discovered that while Telstra and Optus battled for the top spot, Vodafone was noticeably behind. Here’s how the three 5G networks compared in terms of average download speeds in June 2021 (bigger numbers are better):

And here’s how they looked in terms of average upload speeds (bigger numbers are better):

From the results above, it’s clear that Telstra has the number-one 5G network in Australia for speed (not to mention coverage). That said, you might consider Optus or Telstra if you have 5G coverage from their respective networks and want a cheaper 5G plan

If you’re in the market for a 5G mobile plan, check out the popular picks from our comparison engine below: