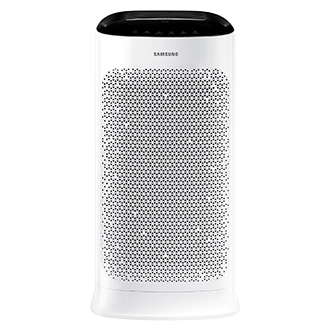 It’s hard to make an air purifier exciting but making it a little bit smarter is a breeze. The Samsung AX5500 air purifier ticks all the right boxes for an air purifier in 2020 (True HEPA filtering with PM10, PM2.5 and PM1.0 readouts), but its user-friendly app and smart home capabilities give it the edge. There are some missed opportunities to educate users on what all those numbers mean, but we still appreciate the extra data. The Samsung AX5500’s biggest downfall is its price tag (especially considering its somewhat limited 60m2 coverage).

What we like
WiFi connectivity and Smart Home integration
True HEPA filtering with PM2.5 and PM10 readouts
Gas monitoring
What could be better
A lot of air quality info and no context
Price is hard to swallow 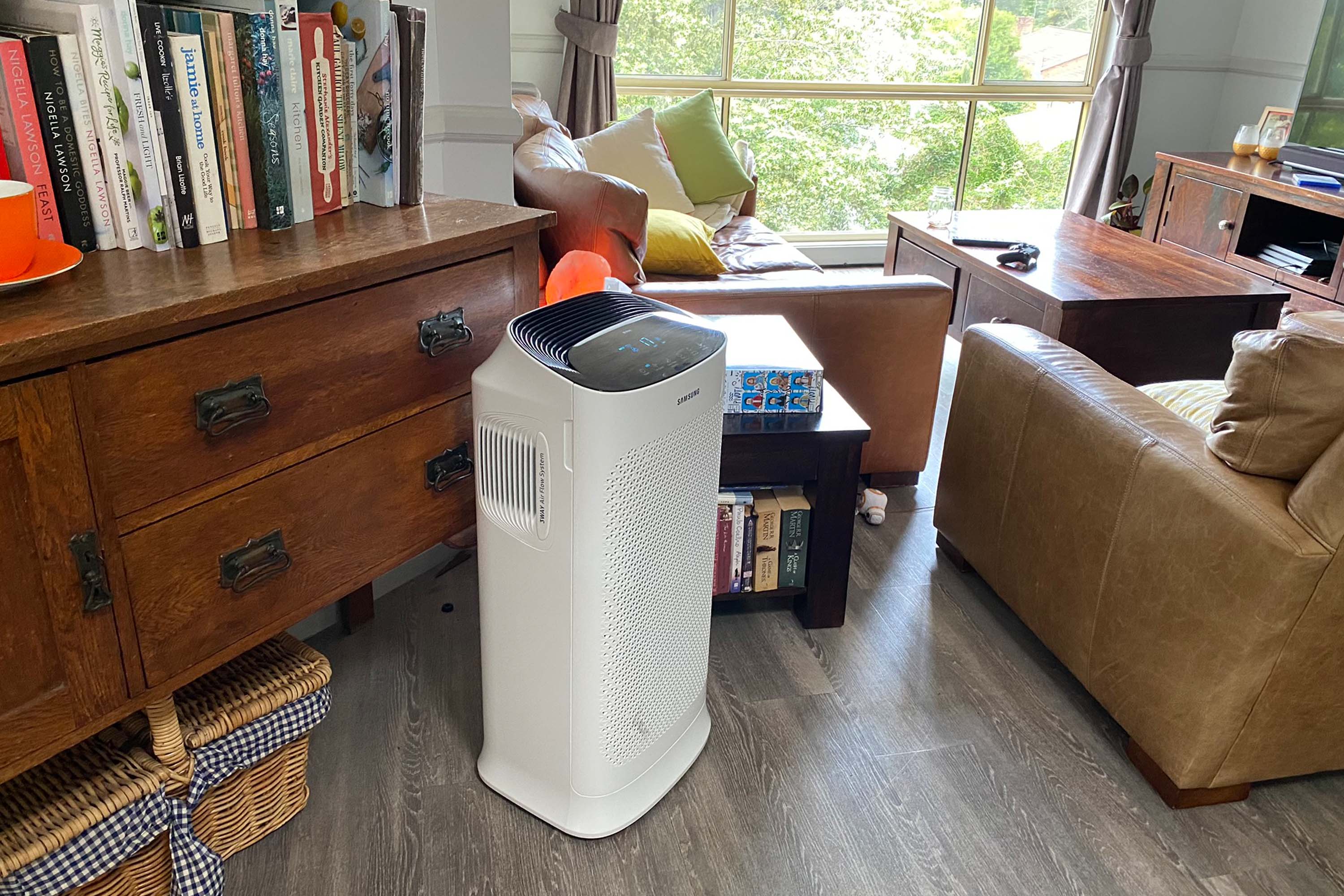 Who needs an air purifier?

In the aftermath of Australia's tragic 2019 - 2020 bushfire season, the hazardous levels of PM2.5 particles in the air sparked a sudden interest in dust masks and air purifiers.

Samsung’s latest air purifiers are a direct answer to Australia’s air quality concerns, promising advanced filtration for different particle sizes, while bringing the home appliance up to speed with a few tech upgrades, like WiFi connectivity and smart assistant compatibility.

We’ve spent a few weeks with the Samsung AX5500, the mid-tier device in Samsung’s new range of air purifiers, and while we appreciate the conveniences that WiFi and app connectivity allow for (scheduling, remote monitoring etc.), it can be a matter of too much information and not enough context. Here are our pure, unfiltered thoughts on Samsung’s new air purifying products.

Though they are becoming less common in a world that’s more scrutinising of air purification, there’s still an abundance of products out there that claim to have “HEPA-type” or “HEPA-like” filters. These are just gross marketing terms that try to claim the trust associated with HEPA (High-Efficiency Particulate Air) standards, without any of the scientific testing to back it up.

True HEPA filters are the closest you’ll get to medical-grade air filtration and they are the only filters professionals recommend for people who suffer from severe allergies or respiratory conditions. By definition, true HEPA filters capture up to 99.97% of particulate matter as small as 0.3㎛ (microns). Nasty stuff like smoke, mould spores and harmful fumes. 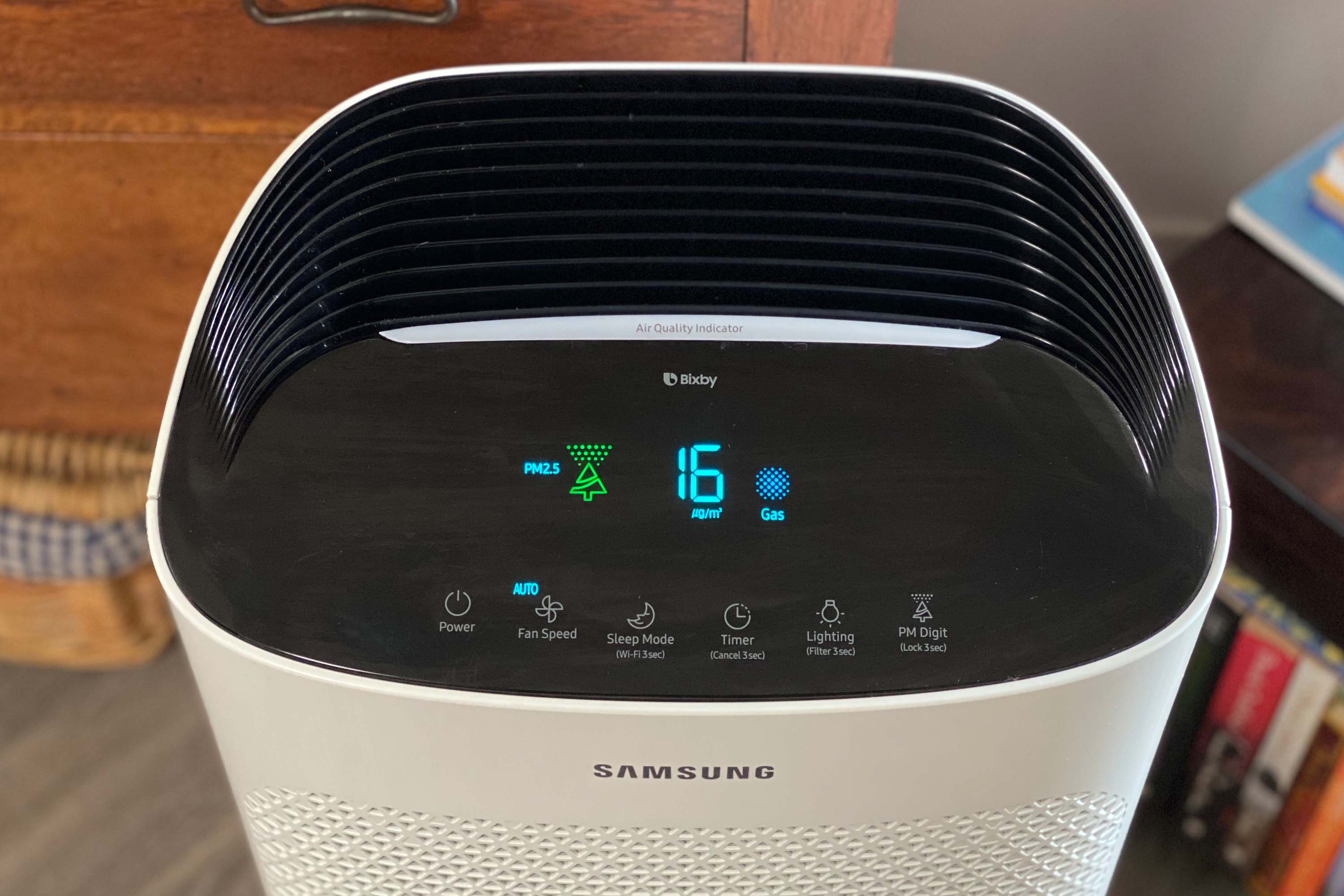 In my experience so far, the Samsung AX5500 does a welcome job of eliminating odours from the room where it's stationed, but it only reaches so far.

What type of home does the AX5500 model suit?

The Samsung AX5500 air purifier claims up to 60 square meters of coverage. That’s enough to cover larger combined living-cooking areas and most two-bedroom apartments. But if you only need a single bedroom covered, or live in a smaller space, you could easily save some money with one of the entry-level devices of Samsung’s 2020 range.

TMI can cause unnecessary panic.

Like most modern purifiers, Samsung’s latest has an easy-to-interpret air quality indicator on top of the device. If the LED strip is blue, the air quality in your home is “good” (which translates to a PM10 level below 30, a PM2.5 level below 15, and a gas pollution level of 1). Green is moderate, yellow is poor, and red is very poor.

If the light is red, you may want to switch the fan from auto to high to get back into the blue, but for the most part, you’ll be letting the purifier do its thing in auto mode.

The LED strip is easy to spot from afar and can be manually switched off (or scheduled via Sleep Mode) and I’d argue it’s all most people will really need. But the AX5500’s display also gives up-to-date numbers on your air’s PM10, PM2.5 and PM1.0 particle levels (it’s set to PM10 by default but can be changed using the PM digit button). There’s some reassurance to be found in watching the numbers drop, but when they’re skyrocketing in the other direction it could cause unnecessary panic.

The problem is, Samsung doesn’t offer any context around these numbers, not even in the SmartThings app which seems like a missed opportunity. 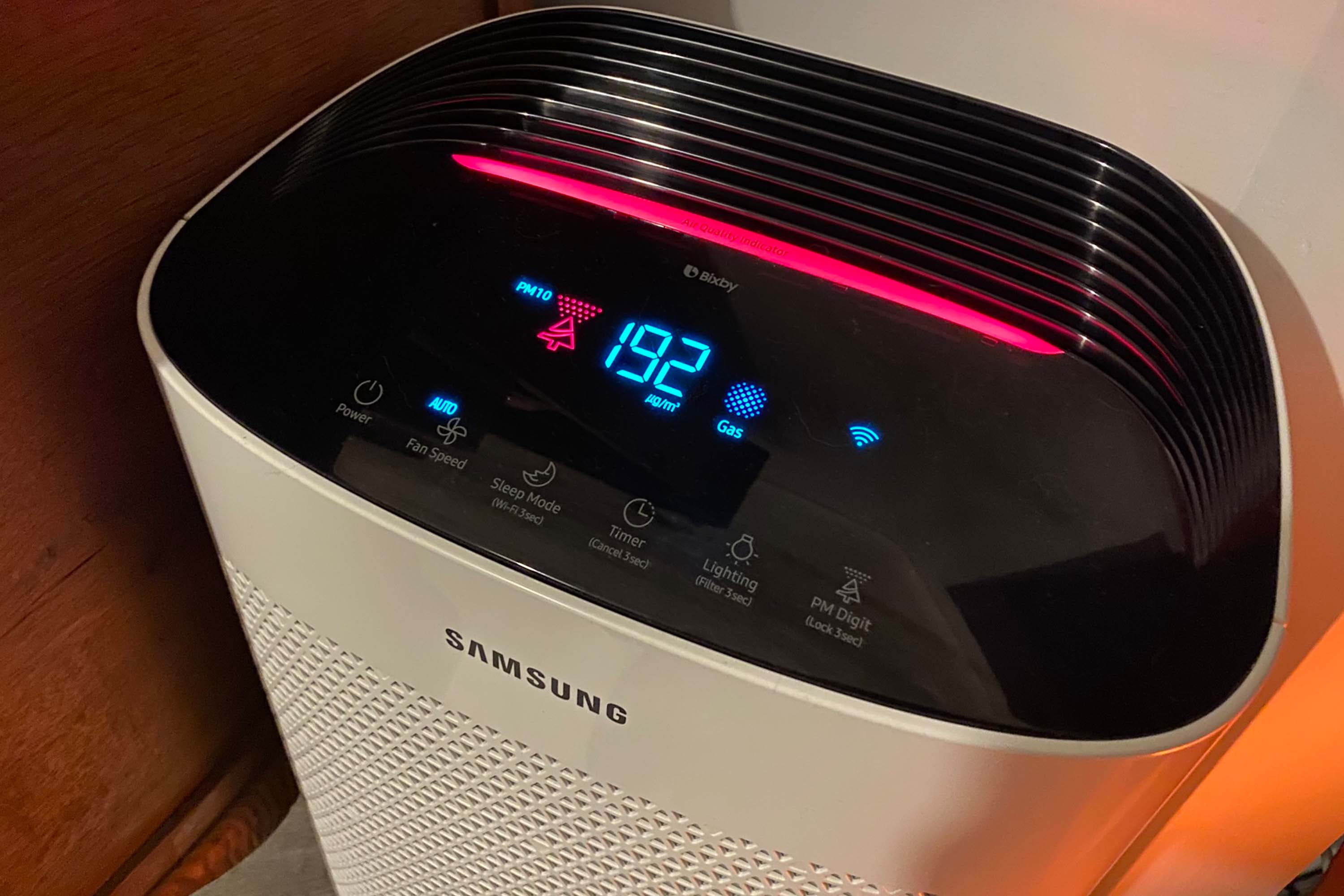 Take for example the second night of my review. I’d left a soup on the boil and when I returned to the living room, I noticed the air purifier had declared my home a state of emergency.

The air quality indicator shifted to red, and the numbers continued to climb. It passed a PM level of 150 microns per-cubic-metre. No problem I thought. I’ve owned air purifiers before and I know they go into overdrive whenever I cook (I can take a hint). Then the number continued to rise. 200, 300, 400. I decided to simmer things down in the kitchen and open the SmartThings app but the app just parroted what I was reading on the display. 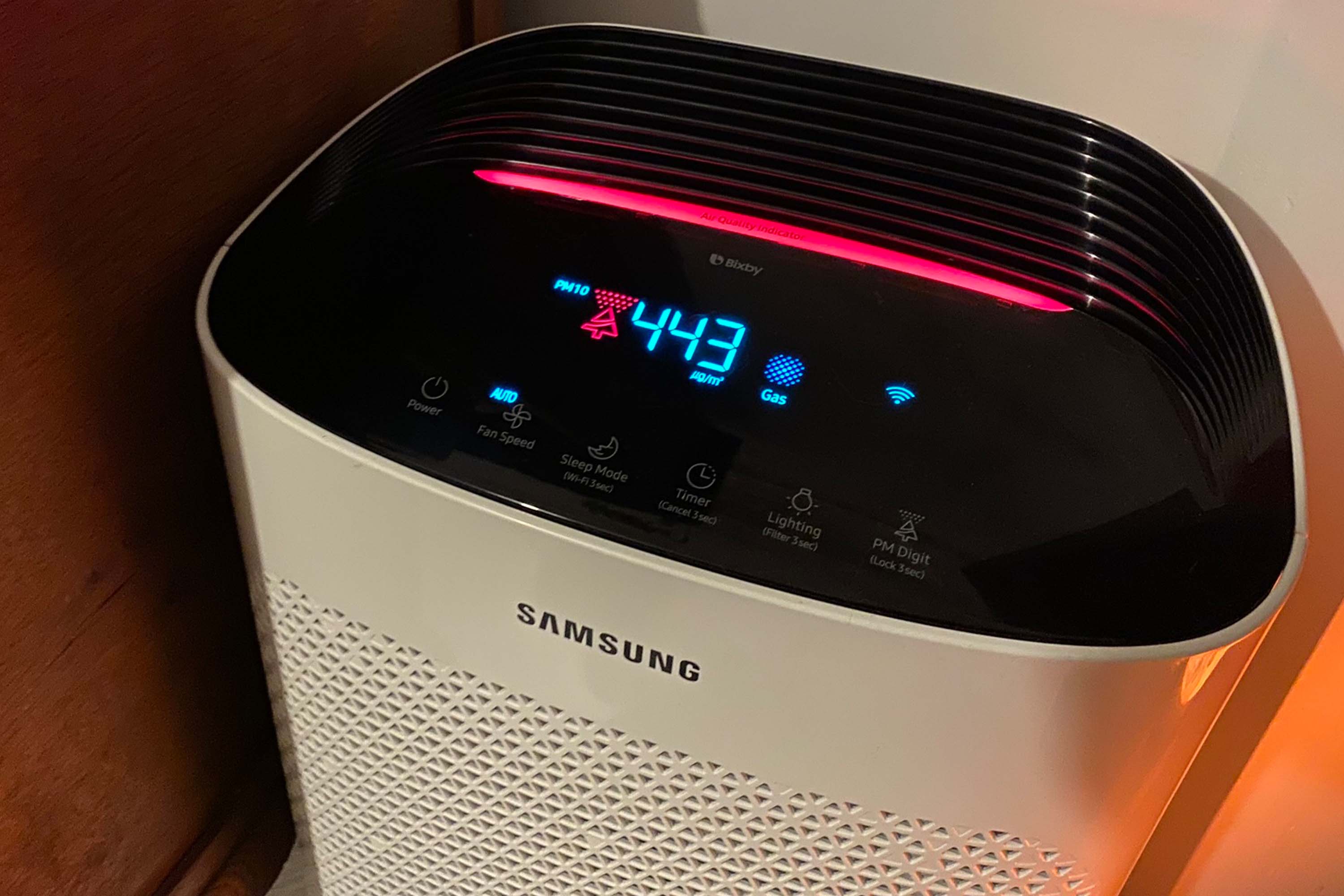 Naturally, I turn to Dr Google, who tells me the air quality is hazardous and recommended I evacuate the area. Knowing what I know about air purifier behaviour while cooking, I just cracked a window and let the purifier get to work. But if you’re a newcomer to air purifiers, or you’re simply not to know, I can see this leading to some temporary panic attacks.

Elsewhere on the AX5500’s display, you’ll find a Gas Pollution indicator, a Filter Change alert (when required), and function buttons for power, fan speed, timer, sleep mode, lighting and PM display. Some buttons are dual-purpose, activating WiFi, for example, requires a 3-second press. A small annoyance, but I’ve struggled to get these secondary functions to initiate.

If you’re anything like me, you’ll be utterly fascinated by the purifier’s behaviour, but there’s no doubt that the ideal scenario for most is more set-and-forget. Thankfully, the AX5500’s WiFi features make scheduling and smart home integration a breeze. 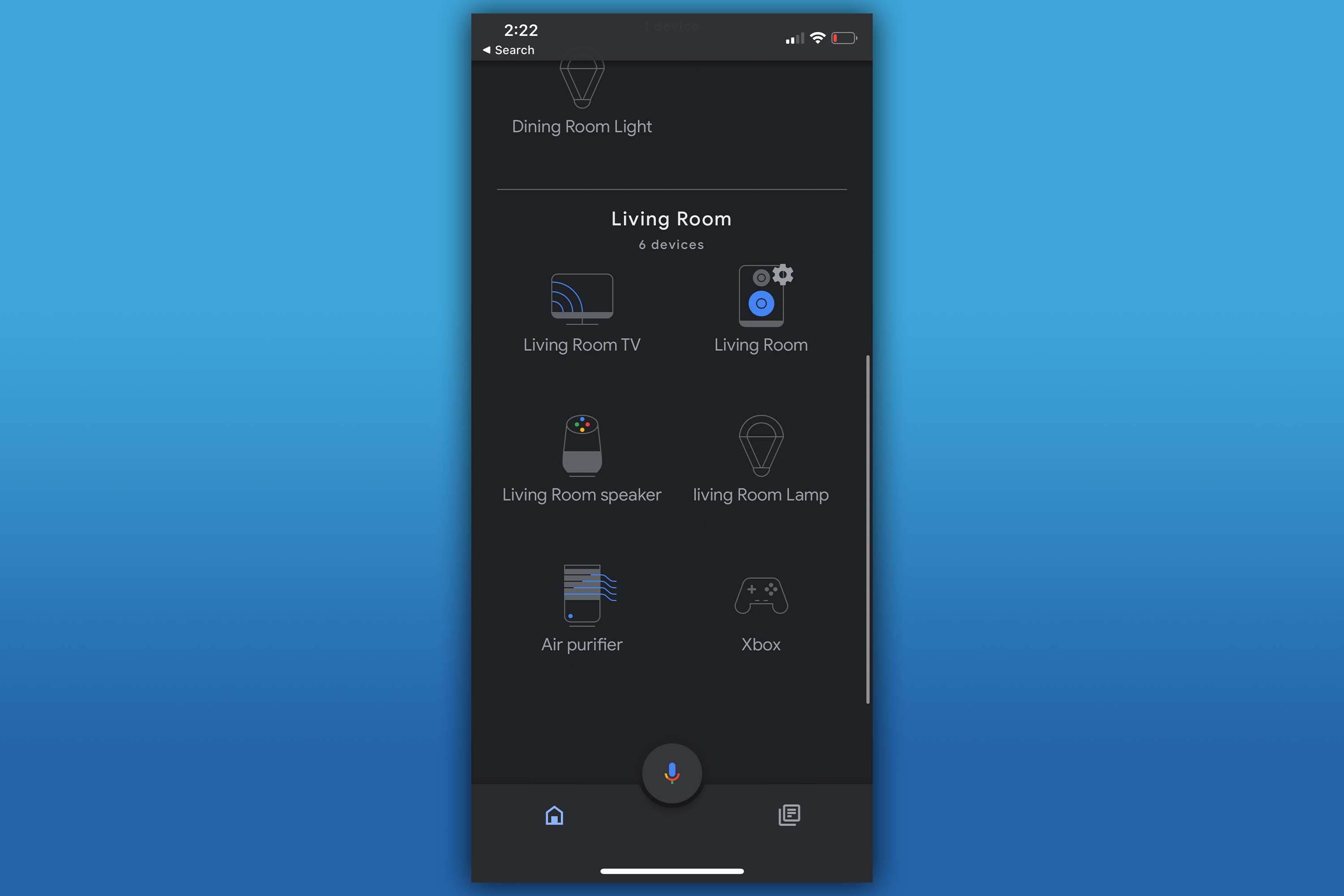 The Samsung SmartThings app (iOS and Android)lets you check the air quality of your home remotely (handy for parents or carers), change the fan speed of your purifier, and set a timer/schedule for start and finish times. It’s easy-to-use and the packaged instruction manual will steer you in the right direction if you have any trouble. But one of the best things about SmartThings isn’t the app itself but its Google Home compatibility.

Google Home owners can link SmartThings to their account, allowing them to control their Samsung air purifier via a Google Home device and app. There are things the SmartThings app does that Google Home won't but it's still convenient to be able to set routines for your air purifier and power it on and off with voice commands. 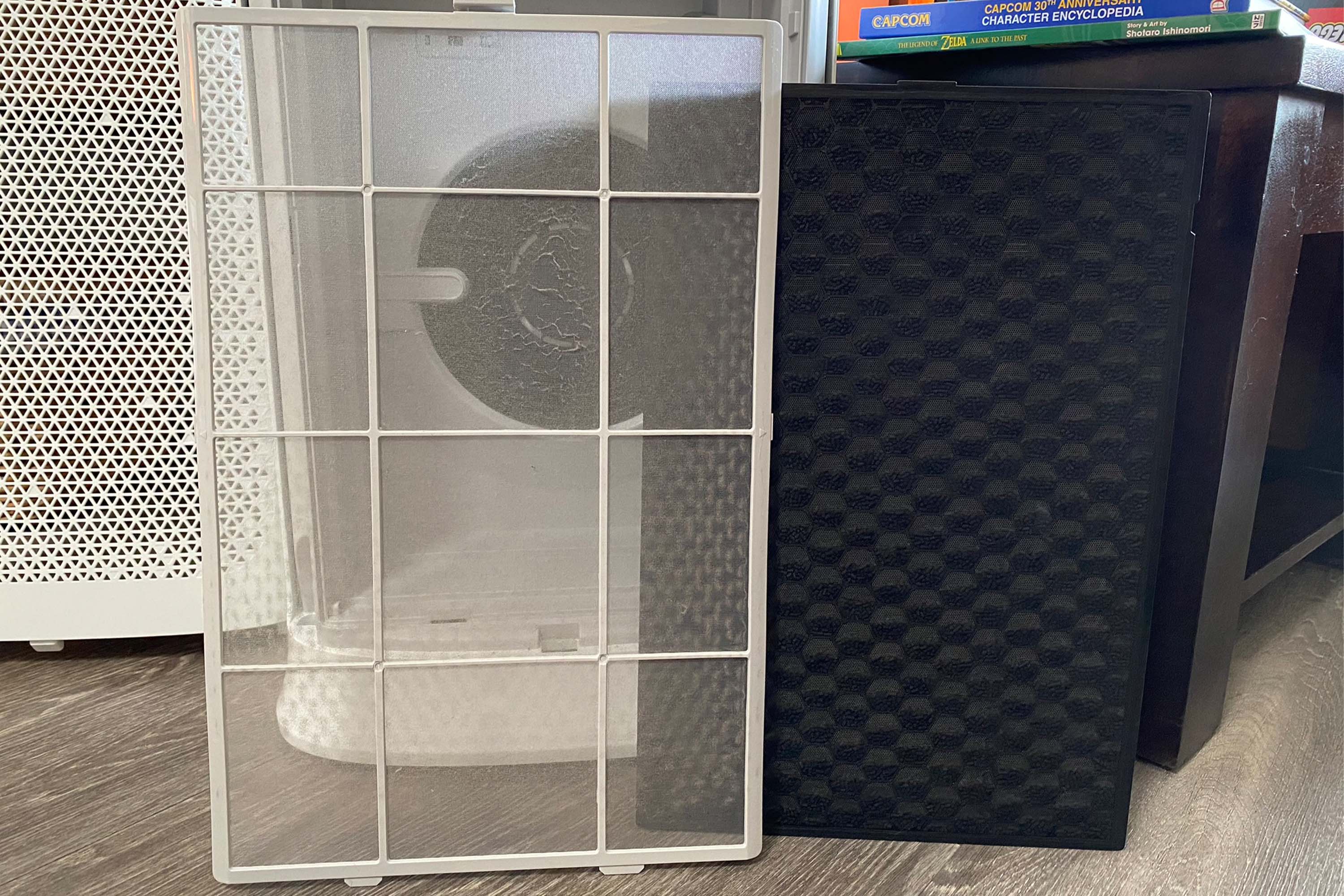 Setting up the Samsung AX5500 was a breeze. Besides some over-the-top packaging, everything is numbered and labelled with plastic tabs that guide you through the short process.

The device can be pulled apart and put back together in a matter of seconds so cleaning the filters a cinch (just give them a light vacuum, too much pressure can damage the filter). The sensors are also conveniently located on the side of the device, so you can give them a whack with the vacuum any time you feel like you’re getting a dodgy reading.

Replacement filters are quite expensive at $149 a pop but Samsung does claim you can get three years out of a filter with light usage (one year with more intensive use).

Samsung sells replacement filters through its official website and select retailers. If there’s one piece of advice I’d give potential purifier owners, it would be to stock up on filters for the foreseeable future. Often, the problem isn’t the price to replace but the availability. Once a manufacturer decides to stop selling a purifier, the replacement filters are often next on the chopping block. This leaves you with a perfectly functional device, with no means to operate it. This isn’t always the case, and sometimes third-party manufacturers can hook you up but we’ve run into this problem before.

WiFi convenience comes at a cost.

Is it worth the extra cost? Well, you won’t be replacing your filters as often as other purifiers require, and the scheduling features available aren’t to be underestimated, but there can be such a thing as too much information and Samsung’s air purifiers fall victim to that. If you compare it against the competition, the AX5500’s coverage should be better at this price point too, but anything less won’t get you the same advanced smart features.

At double the cost, the Samsung AX5500/AX5500K air purifier doesn’t dethrone our reigning top pick, the Philips Series 1000 Air Purifier but it’s still a solid, smarter choice if you’ve got the cash to spare.