How do Aussies use VPNs? To save money, keep their data private, and watch TV

Our recent survey shows that one third of Aussies don’t know what a VPN is, while 30% are using one right now.

Pop quiz: what is a VPN? If you don’t know the answer, don’t fret. While you may be among the 30% of Australians who are using a virtual private network (VPN) right now, you may also be part of the third who don’t even know what one is. Whether you’re plugged in to one of the best VPN services available or still wrapping your head around what a VPN is, our recent survey asked Aussies how they’re using VPNs today. 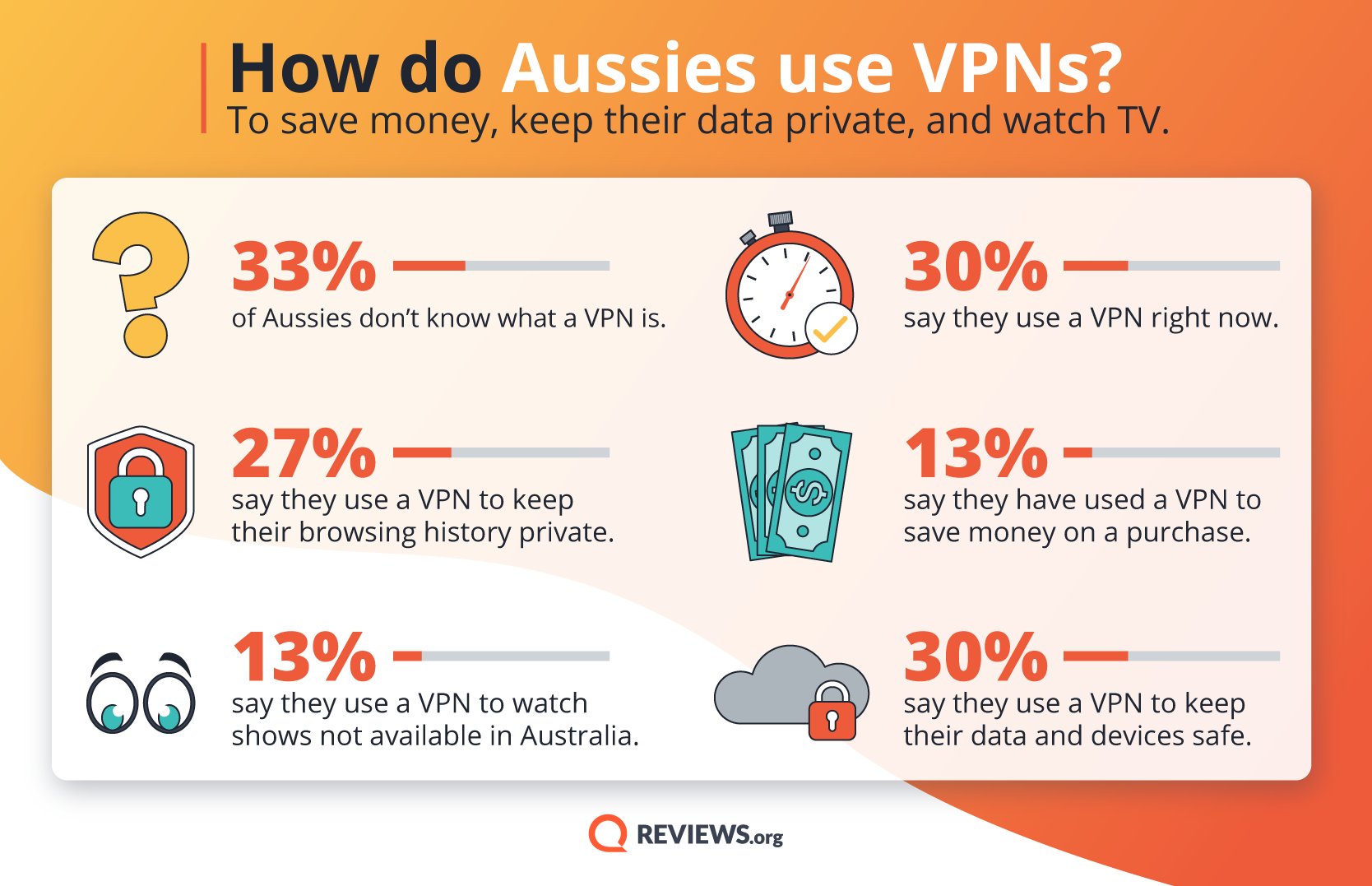 How Aussies use VPNs

While one third of Aussies don’t even know what a VPN is and close to one third (30%) are using one today, our survey also found that 30% of Aussies are using a VPN for what’s arguably its primary purpose: keeping data and devices safe. Similarly, 27% of those surveyed say they use a VPN to ensure their browsing history is kept private.

As is to be expected when sourcing a VPN in Australia, 13% of respondents say they use a VPN to watch TV shows that aren’t available in Australia. While a grey area, that’s one potential way to save money. Meanwhile, 13% of Aussies are savvily using VPNs to save bucks with online purchases.

If you’re one of the 30% of Australians who doesn’t know what a VPN is, we’ve got you covered. The short answer is a VPN is a piece of computer software or smartphone/tablet app that’s used to securely connect a device to the internet via a VPN server.

For the long answer, you can read about what a VPN is and why you need one, how a VPN works and how to use a VPN on an iPhone.

Our survey identified several practical uses for a VPN outside of the more traditional use-case of connecting to a work network. Handily, VPNs tend to allow for multiple devices to connect under a single subscription. NordVPN, for instance, lets you use its VPN service on up to six devices simultaneously, while CyberGhost takes that to seven and Surfshark allows for unlimited devices if you want to protect as many of your connected devices as possible.

This means you can pay the cost for a single VPN service, then protect the most important devices (or all of them with Surfshark) in your home and when you’re out and about. A secure connection established by a VPN server – which can be close to home for speedier results or faraway on the other side of the world – masks your IP address, which can protect your browsing history private and help protect personal data.

Other VPN uses include being able to watch content that’s geoblocked to a particular country, which may be as simple as an upcoming TV show trailer on an American YouTube channel or more complex uses like accessing the US Netflix library or US-exclusive services such as Hulu and HBO Max, though it’s worth noting all of these examples may violate user agreements for these services.

VPNs can also be used to save money. Whether you’re looking at staying at a hotel, booking a flight, hiring a car internationally, finding a cheaper subscription, or buying cheaper digital games from another region, using a VPN may be an investment in saving a little or a lot.

We used Pollfish to survey 1,000 Australians about VPNs in general and the kinds of online activities they use VPNs for. The results above are taken from the results of the report.