The speed limit for smartphone charging has been broken yet again

Oppo is doubling down on their mission to make smartphones charge faster than ever before.

Announced overnight at this year’s Mobile World Congress in Barcelona, the company has shown off a pair of prototype chargers that feature 150W and 240W flash-charging technology.

The first of these, Oppo's 150W SUPERVOOC with Battery Health Engine (BHE) flash charge, is likely to land in the hands of consumers before the latter. 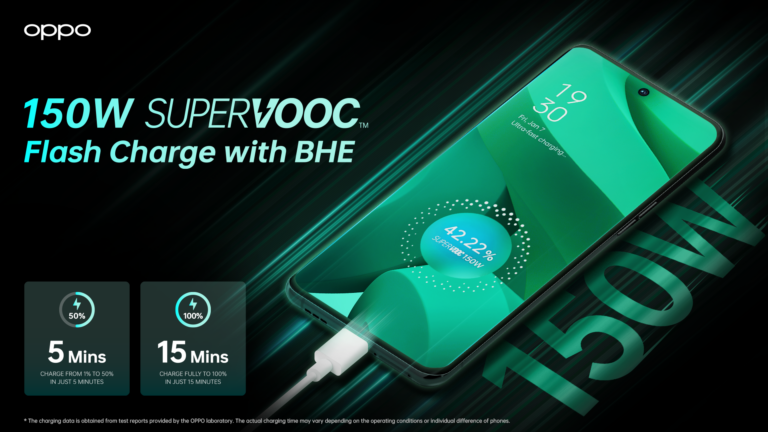 Oppo claimed that the 150W SUPERVOOC with BHE flash charger can take a 4500mAh battery from 0% to 50% in five minute and full charge in fifteen minutes.

As the naming for this one might suggest, these faster charging speeds aren’t arriving without consideration of the safety implications. Oppo said that batteries charged using the 150W charger maintain 80% of their original capacity after 1600 charge cycles.

According to the company, this feat represents double that of the industry standard. For comparison, Apple’s iPhone 13 supports up to 20W charging while Samsung’s Galaxy S22 Ultra supports up to 45W charging.

Oppo's 150W SUPERVOOC charger also leverages the new efficiencies allowed for by gallium nitride in order to ensure that the physical form-factor of their latest supercharger is more-or-less the same as its 65W predecessor.

While this 150W charger might be more of a rarity than the standard, OPPO said that they expect to integrate their latest batch of battery health tech into most mid-to-high-end Oppo and OnePlus devices in the future.

Even if Oppo is generally regarded as a leader when it comes to fast-charging, that’s still a fairly significant upgrade on past efforts by the company.

To accommodate these faster charge speeds, Oppo said that they’ve adopted five key safety protection measures, including an intelligent control chip that keeps the voltage, current and temperature of the charger in line.

Still, at this stage, it sounds like it's more of a personal best than something to expect from next year's flagship.

While Oppo said that a OnePlus device featuring the 150W SUPERVOOC with BHE flash charger will debut sometime in the second quarter of 2022, there’s no timeline yet on when a smartphone with 240W charging is likely to hit the market.