A fully armed and operational smartphone with plenty of power and battery power for days. 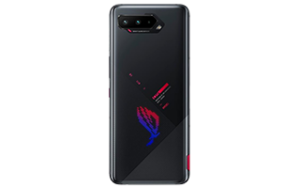 It doesn’t feel like so long ago that the Asus ROG Phone 3 impressed me with its speedy performance and powerful battery life. Fast-forward a year or so and its successor, the ROG Phone 5, is an upgrade pretty much everywhere across the board. (If you’re wondering what happened to the ROG Phone 4, it never existed.)

Apart from half the internal storage capacity of the ROG Phone 3 (256GB vs 512GB) and an almost identical camera, everything else is an upgrade. The ROG Phone 5 will handle everything you throw at it, including top-of-the-line mobile games, and it both looks and sounds good while doing it. If Asus had addressed familiar foibles of the ROG Phone 3—namely, no wireless charging, no meaningful waterproofing, an okay-but-not-amazing camera and an AWOL MicroSD port—the ROG Phone 5 would be dangerously close to high-end perfection.

No MicroSD for storage expansion 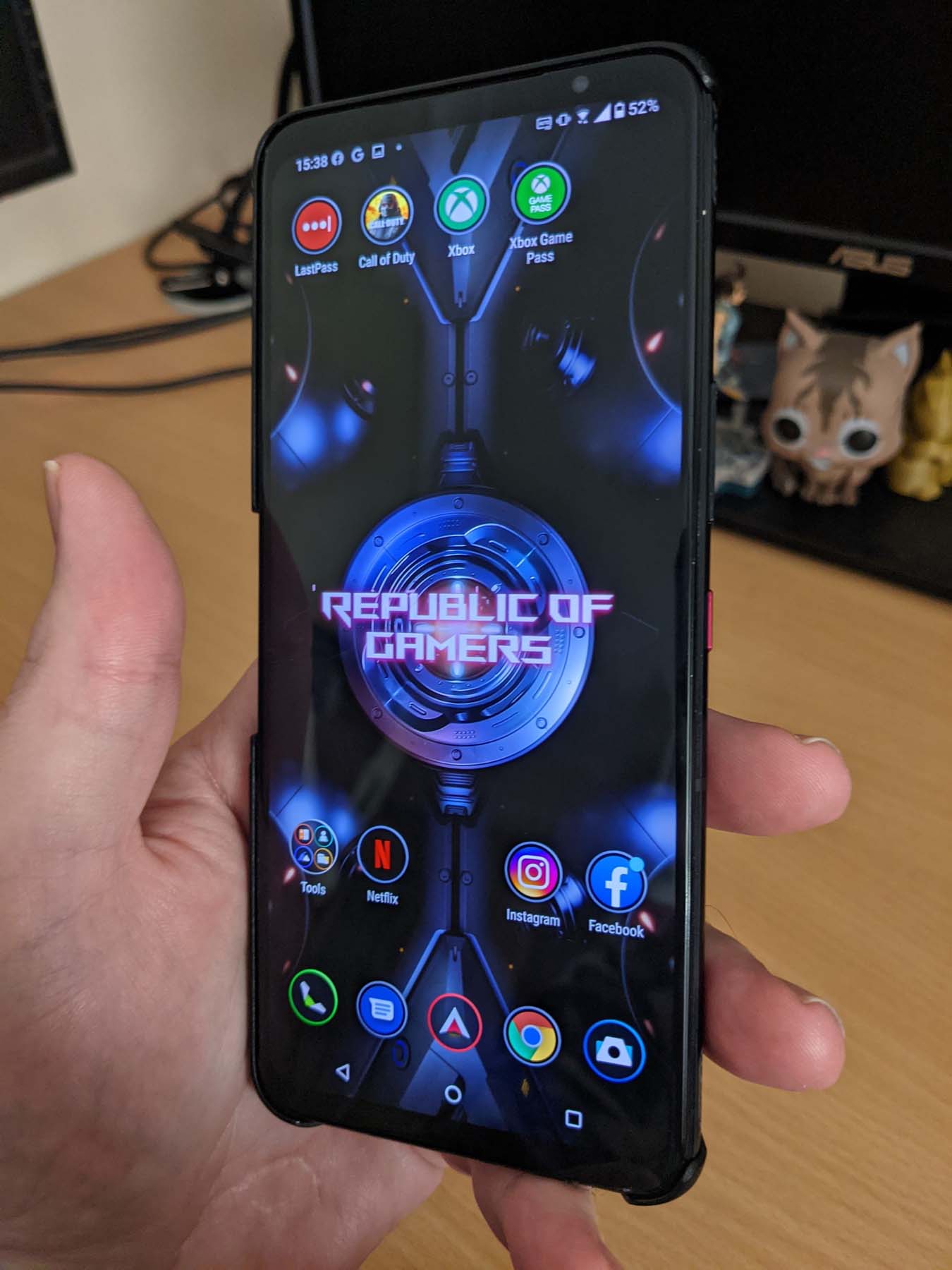 How much does the Asus ROG Phone 5 cost in Australia?

Asus embraces its gamer roots and leans into a customisable approach with its ROG Phones, and the Asus ROG Phone 5 is no different. The review model I was sent comes with 256GB of internal storage and 16GB of RAM, but there’s also a version with 8GB of memory and 128GB storage, plus another variant with 12GB of memory and 128GB of storage. The lower the specs, the cheaper the price you can expect to pay, but for the model most readily available in Australia (the same as our review model), you’re looking at a $1,599 RRP.

Data effective 2/7/2021. Offers and availability may vary by location and are subject to change.

The table below compares the core specs between the Asus ROG Phone 3 and its ROG Phone 5 successor.

My Asus ROG Phone 3 review set the scene for a high-end Android phone that may be built for gamers, but also has plenty to offer for non-gamers seeking a big-screen, long-battery smartphone with power to spare. Fast-forward to the release of the ROG Phone 5, and while the ROG Phone 3 has held its value at $1,399RRP, really, the only edge it has over the ROG Phone 5 is double the internal storage (512GB vs 256GB).

The ROG Phone 5 ships with Android 11 (reportedly coming to ROG Phone 3), is marginally lighter (238g vs 240g), plus it has a slightly bigger, better display. More importantly, the ROG Phone 5 has a more powerful processor, 4GB more memory and the included 65W charger runs rings around the ROG Phone 3’s 30W charger. According to Nano Review, the ROG Phone 5’s processor is a 12% overall improvement over the ROG Phone 3, with a 17% boost to gaming performance and a 16% increase in battery life.

More than just a gaming phone

As you’d expect, you get the usual stuff: the smartphone, a charging cable and, in this case, a chunky 65W fast charger. With my review unit, I also got a basic but functional plastic case alongside some very gamer-centric inclusions: an attachable AeroActive Cooler and the Asus ROG 5 Kunai 3 Gamepad. 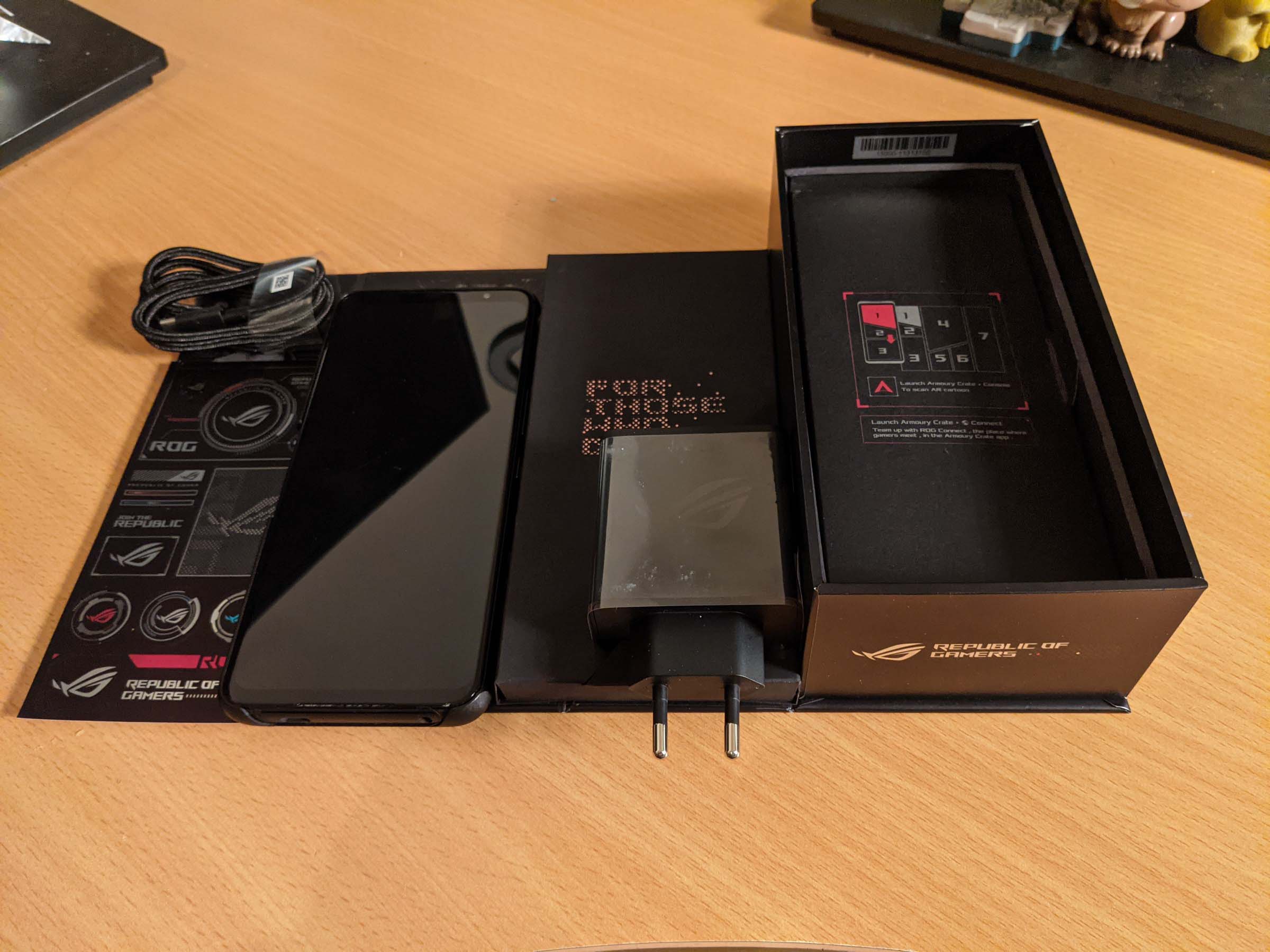 Looking at the ASUS ROG Phone 5 screen, you wouldn’t know it’s a gamer smartphone. But once you flip it over, the gamer-centric aesthetic is in full force with a ROG LED logo. While the back of the phone is plastic (not of the cheap-feeling variety), the sides of the handset are metal, which adds to an overall durable feel.

There’s a USB-C charging port on the bottom left of the phone and a 3.5mm headphone jack on the right. The right side of the phone has the expected power and volume controls but, unique to ROG Phones, the left flank has a USB-C port and connector for the attachable AeroActive Cooler, which is an optional cooling add-on for those looking to push the ROG Phone 5 to its limits while keeping it cool.

Even with the huge 6.78-inch display, the ROG Phone 5 feels more robust than hefty. That said, even as someone with big hands, it does feel a smidge too wide for practical one-handed texting, but given the size of the screen, this is clearly a handset that’s meant to encourage landscape use whenever possible.

The only initial configuration challenge I had was the SD card slot only appears to be compatible with the mercifully included tray-removal eject pin. Regular pins aren’t quite long enough to pop out the tray. Definitely don’t lose the included one if you intend on switching SIMs at some point.

From the first time you turn on the ROG Phone 5, through to typical daily use, music streaming and gaming, the AMOLED FHD HDR10+ display is a thing of beauty. It still feels like a missed opportunity to not have a QHD+ display (or higher) to bolster this big-screen beauty, but this is one pretty customer no matter what you’re doing, helped along by the silky-smooth 144Hz refresh rate. 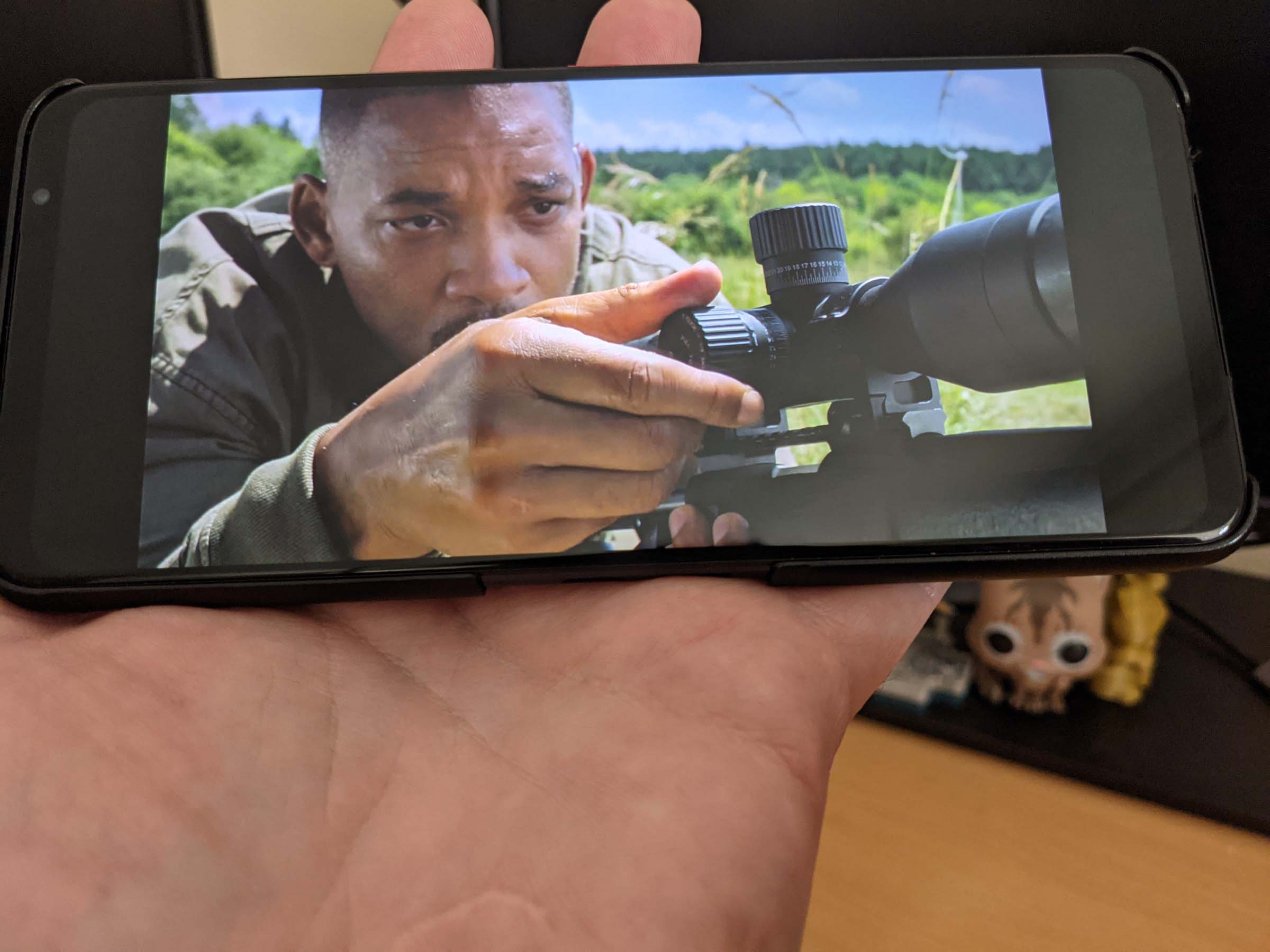 Plenty of longevity plus lightning-fast charging

I recently lauded the two-day (plus) battery life of the Motorola Moto G10 handset, which is a budget smartphone with a 5,000mAh battery. As you’d hope with the $1K+ price difference, the Asus ROG Phone 5 is on a whole other level. When my ROG Phone 5 review unit arrived, it was completely flat, but it only took 53 minutes to go from 0% battery to fully charged.

The only negatives for this insanely fast charging speed are that it gets warm while recharging (though not uncomfortably hot) and that 65W fast charger is a chonker of a thing, which you may have issues fitting next to another in-use power outlet because of its noticeable width.

Minor gripes aside, everything else is a win when it comes to battery life. During my casual-use tests—a mix of everyday use, including browsing, social media and videos—it got to day four without powering down or recharging before the ROG Phone 5 dropped below 15%. When I ran a 10-hour YouTube video at Full HD resolution overnight after a full charge, the ROG Phone 5 still had 56% battery left when the video finished, so that’s more than 20 hours of video playback time in your pocket.

That’s a lot of everyday use, that’s a lot of video watching, that’s a fair chunk of gaming time and, ultimately, it doesn’t matter how low you run the battery because you can get a whole lot of juice out of the fast charger in a handful of minutes. Seriously. Just check out the table below for proof of that. 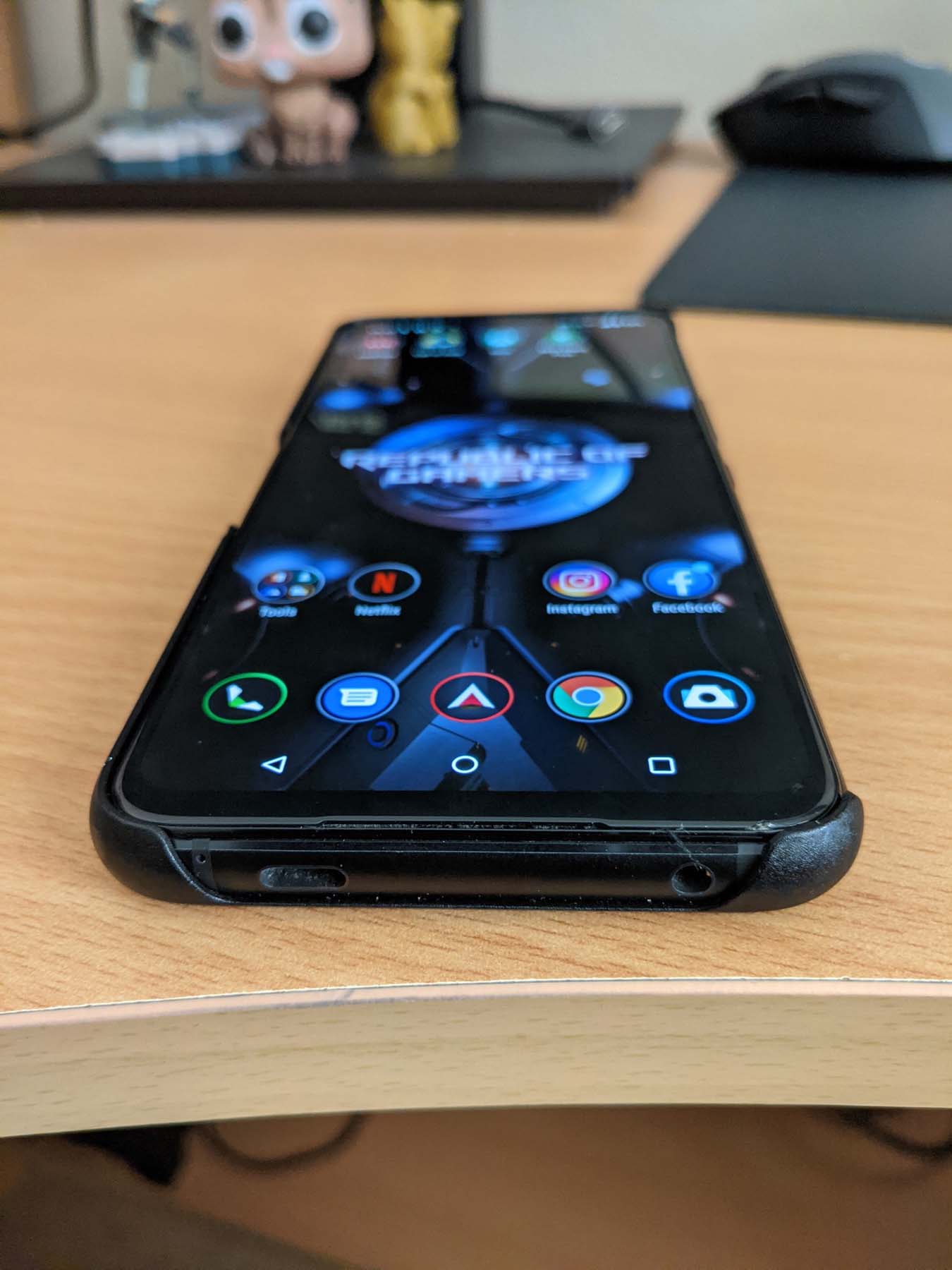 Never runs out of puff

After trying to make it skip a beat, all I can say is good luck trying to get ahead of the Asus ROG Phone 5. The potent combination of the powerful Snapdragon 888 processor and a whopping 16GB of RAM means this smartphone is built to keep up with furious multitaskers as much as it is hardcore handset gamers.

You can get lazy with your multitasking if you like, leaving all of your daily apps (and then some) open simultaneously, then delight at being able to speedily scroll through and restore them without a hitch. If you’re the kind of smartphone user that gets distracted easily or frantically inspired to jump between apps, the ROG Phone 5 keeps up. Basically, don’t expect any input or app-switching delays.

The big target market for the ROG Phone 5, though, is the one that likes to target hit markers in smartphone gaming. Even after hours of testing Call of Duty Mobile, the ROG Phone 5 didn’t break a sweat. It didn’t even heat up beyond the level of charging warmth, so it’s very useable for long mobile gaming sessions even without the AeroActive Cooler and you don’t necessarily need to use a controller like the Asus ROG 5 Kunai 3 Gamepad.

That said, on the topic of Call of Duty Mobile and any other mobile shooters with controller support, you absolutely should use a controller if you want to dominate. The ROG Phone 5 is the smartphone equivalent of investing in a more powerful PC with a high-refresh-rate monitor for a competitive edge in online gaming.

Call of Duty Mobile, for instance, can run at 120Hz, which the ROG Phone 5 easily handles without dropping frames thanks to its powerful processor and 144Hz display. More impressively, the genuinely great speaker setup offered a competitive edge, where I was able to identify the direction of footsteps (beyond just left or right) and pre-aim for where the enemy player appeared for an easy kill. Put simply, this is a killer handset for mobile gaming. 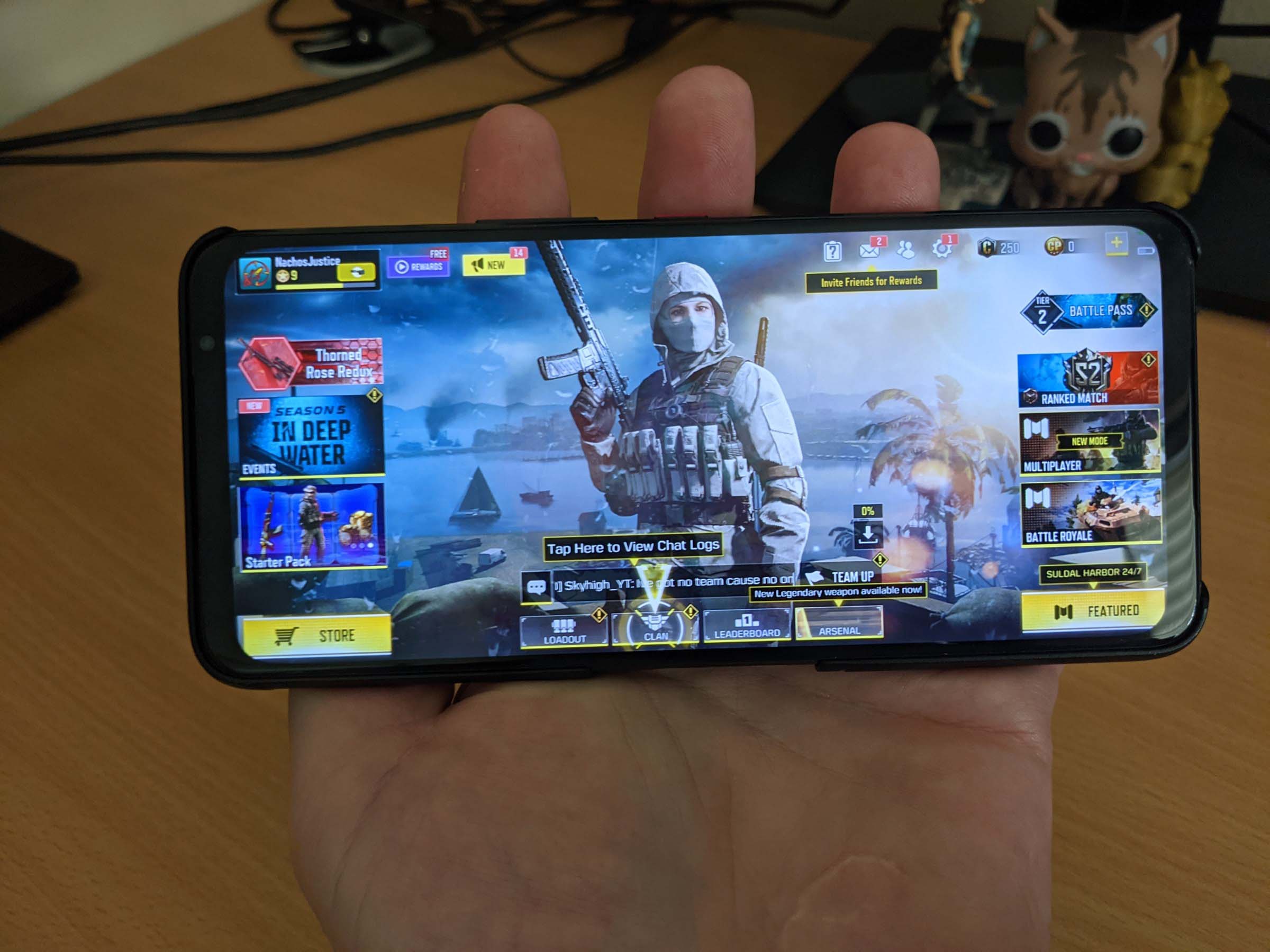 Decent results but not so premium

Let’s keep this brief because not a lot has changed between the Asus ROG Phone 3 and the ROG Phone 5. The power perks outlined above mean this is a speedy snapper, so don’t expect blurred results because of a delay after pressing the shutter button. If you’re not an avid photographer, the results are perfectly respectable. For those who care more about their photography, the ROG Phone 5’s regular pics aren’t as detailed and have a tendency to look more washed-out in comparison to main camera and selfie shots from the Google Pixel 5, even if the 7x zoomed shots were better. 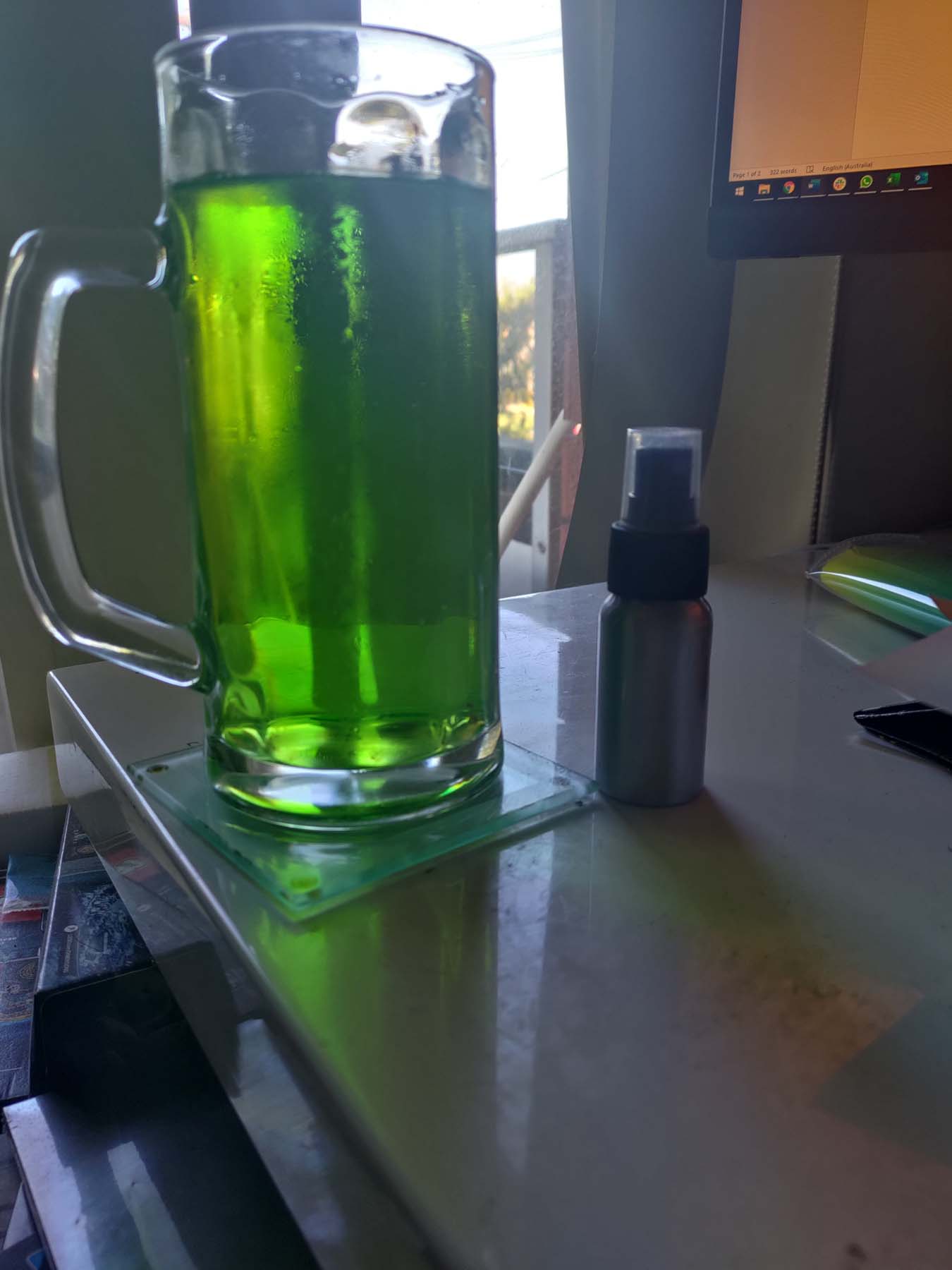 1 / 4
The main camera takes okay daytime pics but the detail is lacking in the carbonated cordial.
Share: 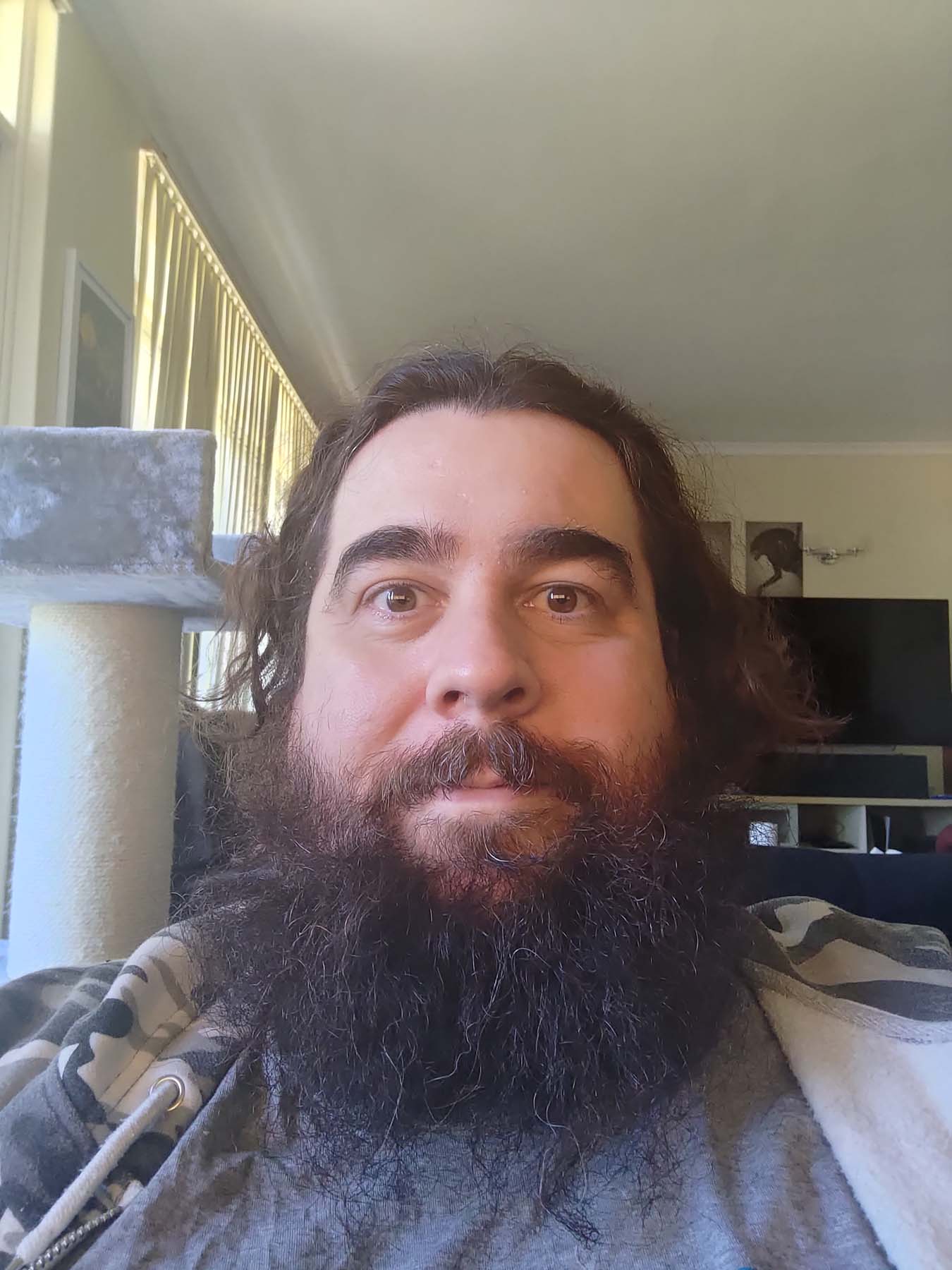 2 / 4
The selfie camera is decent but the results lack detail wherever the light touches.
Share: 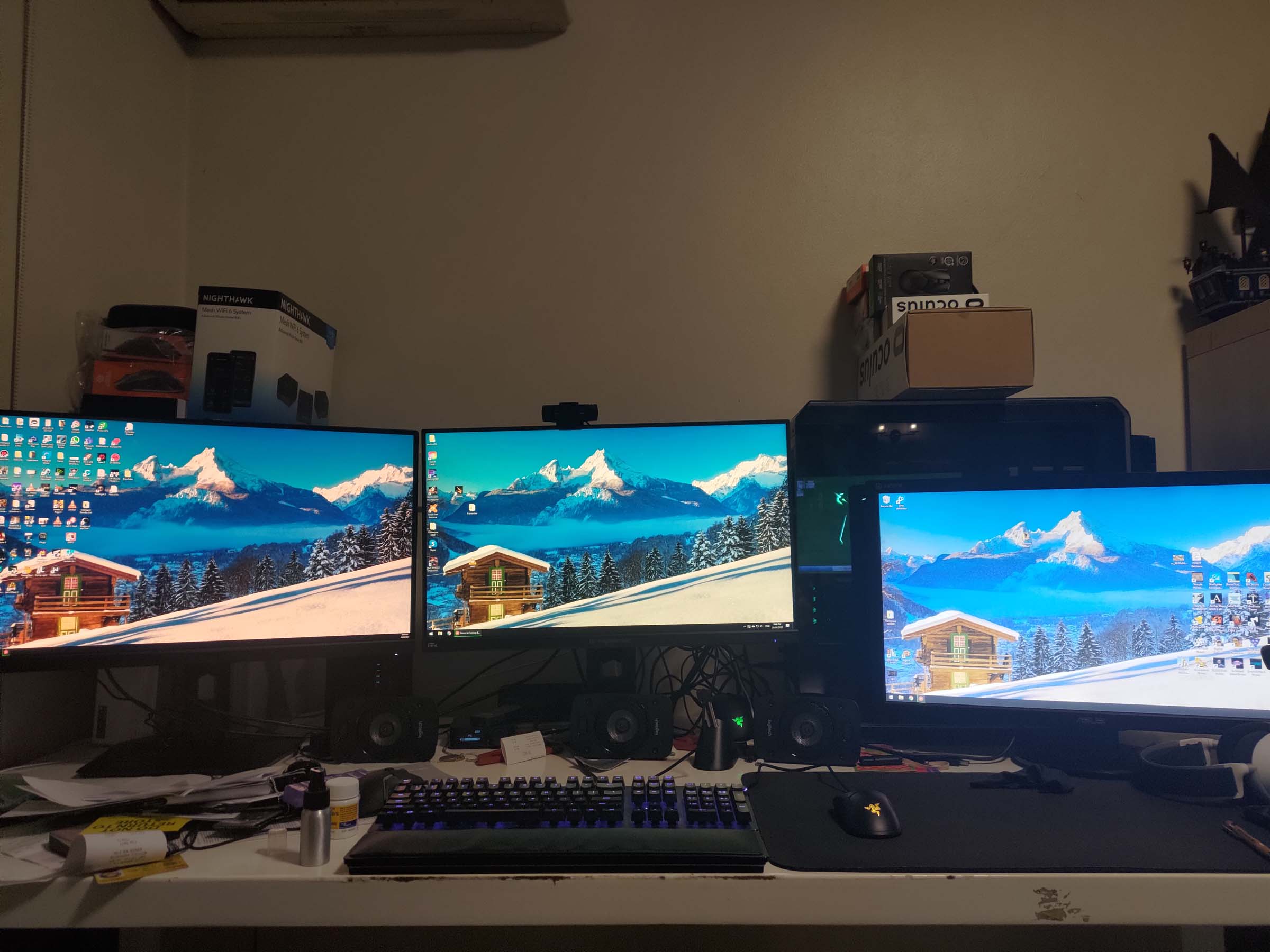 3 / 4
Excuse the mess, but this picture shows a lack of detail from light sources.
Share: 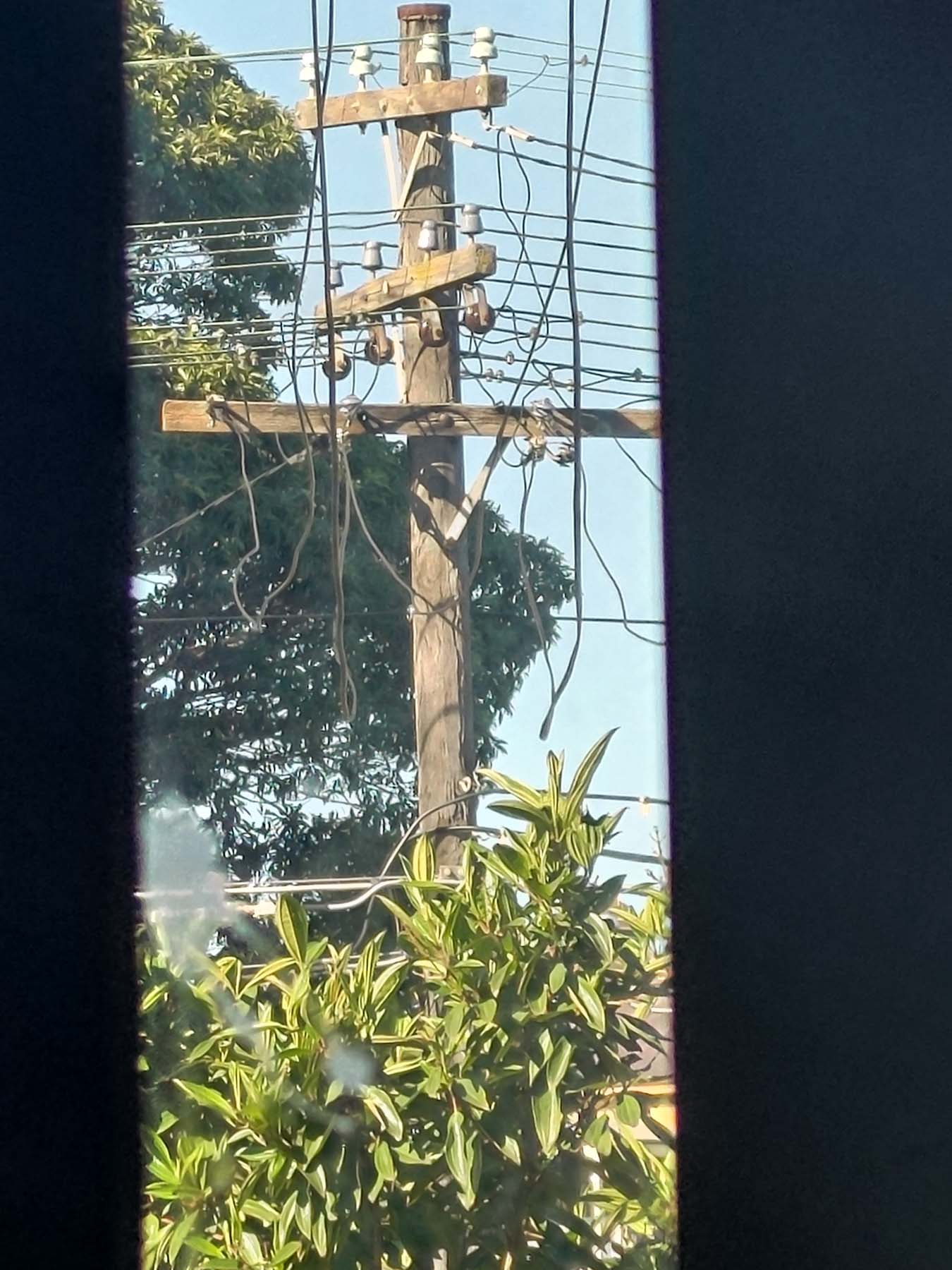 4 / 4
A zoomed-in picture of a telegraph poles actually has respectable detail.
Share:

Is the Asus ROG Phone 5 worth it?

If you’re serious about smartphone gaming, you seriously need to consider the Asus ROG Phone 5. For casual smartphone gamers or those not at all interested in it at all, despite some odd omissions, there’s still a lot to love thanks to an incredibly responsive handset and fantastic battery perks.