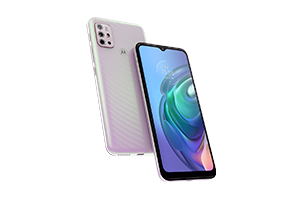 When you see a $249 RRP, you know you’re buying a budget handset, but you may be surprised at some of the more premium inclusions of the Motorola Moto G10. It’s certainly no Samsung Galaxy S21, iPhone 12 or Google Pixel 5, but it’s about a quarter of the cost of the cheapest of that trio.

Most impressive is the fantastic battery life and it’s great to see a USB-C port for charging. Speaking of ports, the 3.5mm headphone jack is there for those want that audio option, which is good because the single speaker is on the tinny side. Alternatively, the Moto G10 has Bluetooth 5.0 for those favouring a wireless audio upgrade.

The big screen might not have the best resolution but the extra screen real estate makes it a great fit for big mitts and you’ll appreciate it when watching videos. Fingerprint and face login, MicroSD expansion, the latest Android version, actually useful Motorola software and camera versatility (even if the photographic results aren’t the best) also help round out the features of an affordable smartphone whose main hitch is the noticeable lag care of the budget processor. 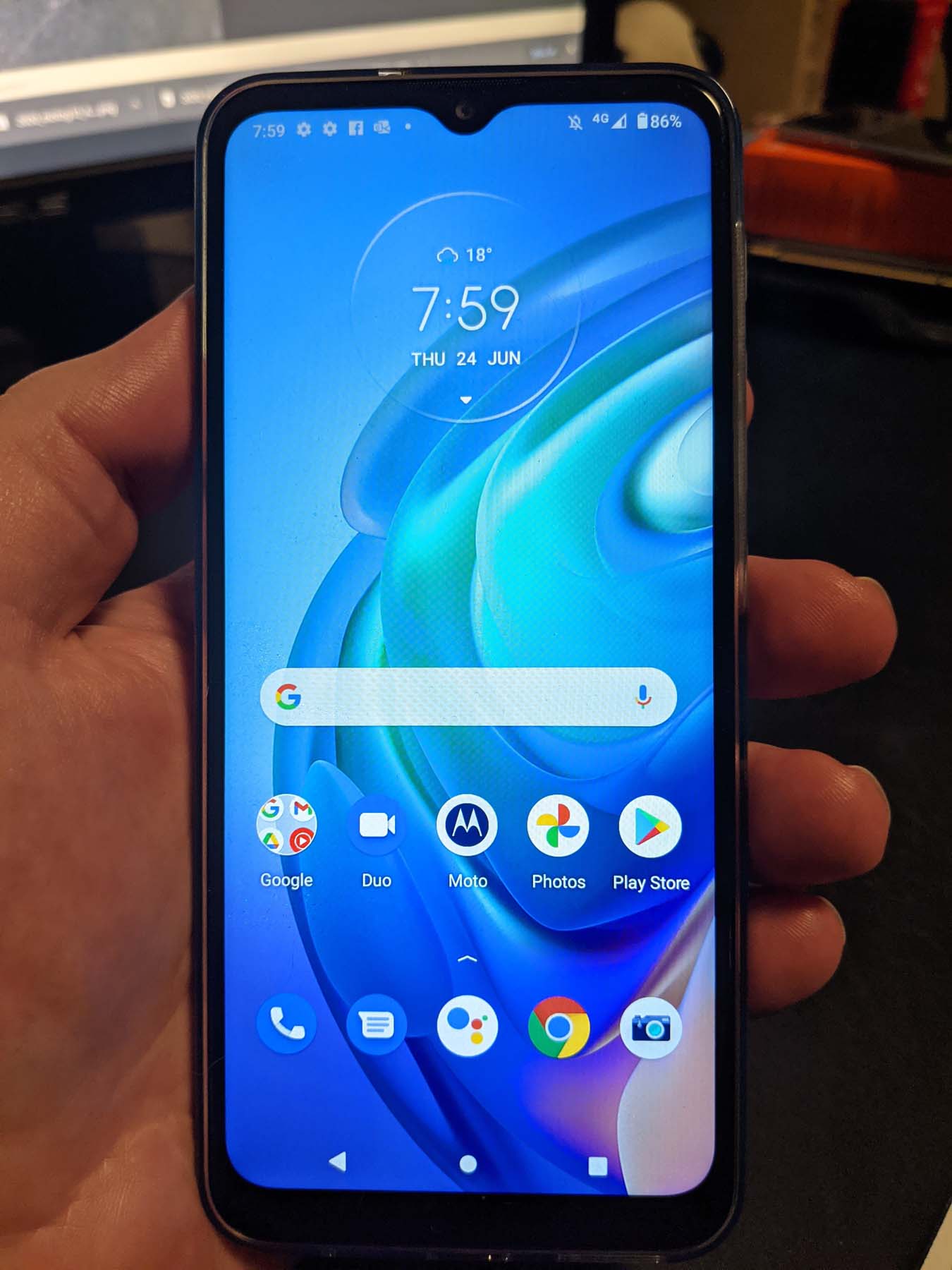 At an RRP of $249, the Motorola Moto G10 is intended for those seeking a cheap smartphone in Australia. At the time of writing, though, there were big-name retailers like Officeworks and JB Hi-Fi offering the Moto G10 for $199, which is an absolute steal. Below is a pricing table of the cheapest places that we could find to buy the Moto G10 outright.

Data effective 24/6/2021. Offers and availability may vary by location and are subject to change.

Currently, Vodafone is the only telco offering Postpaid plans that let you combo a phone plan while paying off the Motorola Moto G10. Below is a daily updating list of the 10 most popular Vodafone plans that bundle a Moto G10.

The table below outlines the core specs for the Motorola Moto G10 next to the Moto G30 for comparison.

All you need, including headphones

Inside the Motorola Moto G10 box is assorted expected documentation, alongside the big-screen handset at the top. Beneath the smartphone you’ll find the charger and a USB-C-to-USB-A cable as well as (refreshingly) a pair of wired in-ear headphones. 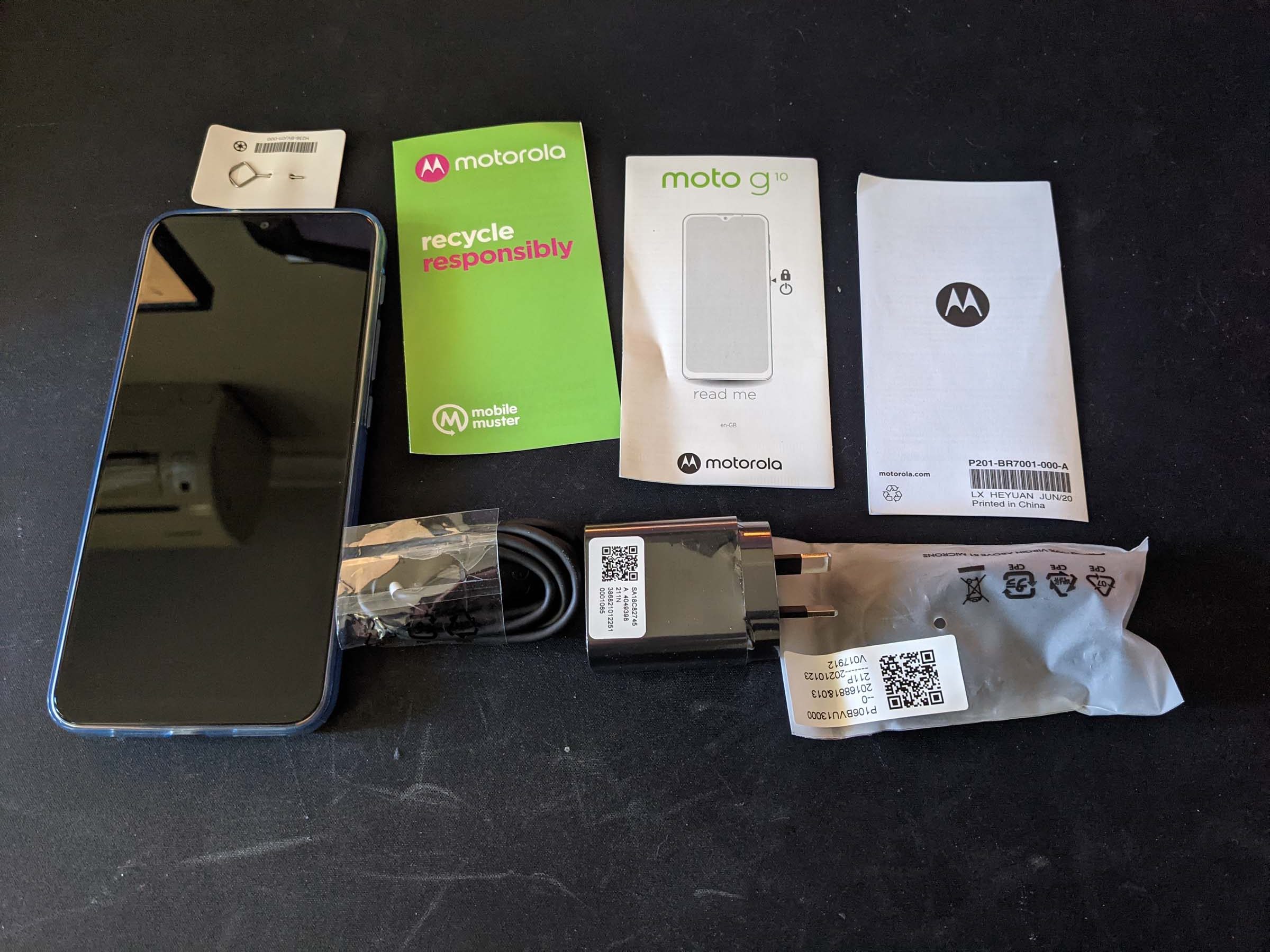 As someone with big hands, I appreciate the size of the Motorola Moto G10, even if my thumb only just reaches to the other side of the keyboard for lazy one-handed typing. For me, this is a smartphone that feels best when it’s popped into landscape mode for faster texting, even if auto-rotation strangely wasn’t enabled by default.

The ripple design on the back is a nice touch to the plastic case that feels closer to functional than cheap. Despite the extended screen real estate, the Moto G10 doesn’t feel overly cumbersome and still slides neatly inside the average pocket.

The 6.5-inch IPS LCD display has an expected base 60Hz refresh rate alongside a 720x1800 screen resolution. While that resolution isn’t the best and feels more noticeable on the larger screen (particularly in side-by-side comparisons with other handsets), it gets the job done for the pricepoint and is still very useable for everyday smartphone-ing as well as video streaming.

Depending on which handset you’re used to, you may also dislike that the power button is beneath the volume controls. That one above the volumes that I kept initially pressing by accident is a dedicated Google Assistant button. 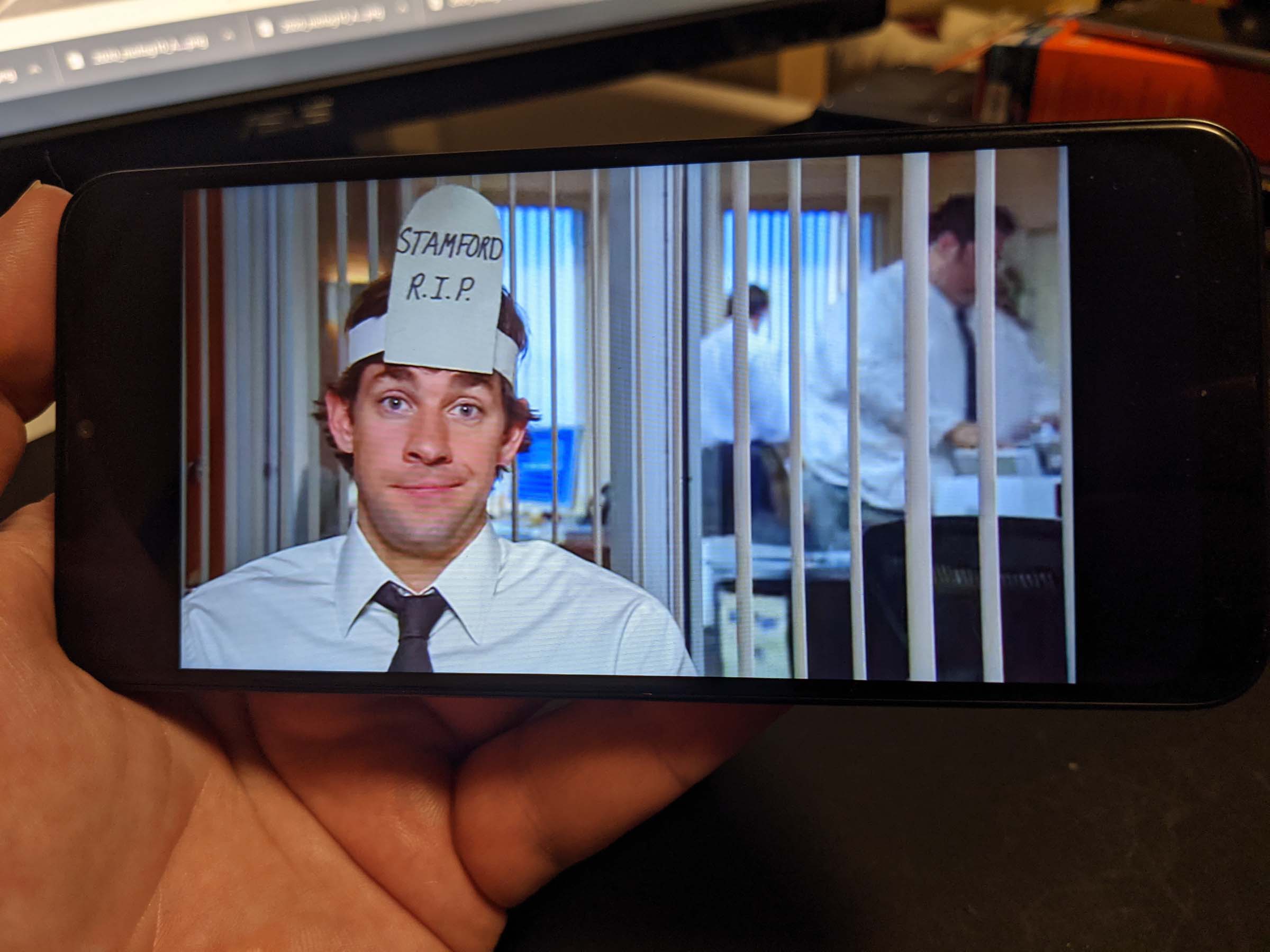 Two days easy, double that for lighter use

Battery life is where the Motorola Moto G10 shines. If you’re tired of pocketing a power bank just to give your smartphone enough juice to get through a day, the Moto G10 won’t disappoint. It’s packing a monster 5,000mAh battery which, combined with the lower-spec processor, 60Hz refresh rate and lower-resolution display means this has some serious battery staying power.

Expect to get a couple of days out of this for standard use and even a full day when you throw in a healthy smattering of video streaming alongside an unhealthy amount of screen time. For those who use smartphones reactively, the Moto G10’s battery longevity is so great that older phone users will be reminded of the glory days of the Nokia 3310 when the only time you thought about reaching for the charger was when the battery hit single digits.

Speaking of charging, despite the on-screen text that says the Moto G10 is “charging rapidly”, the realities of a 10W charger and hefty battery capacity run contrary to this claim. Basically, you’re looking at around three hours to go from zero juice to fully charged. Still, you can activate a neat battery-preservation feature for optimised charging, which charges to 80% battery life then does the final 20% closer to when it anticipates you’ll unplug (but it has to get used to your charging habits first). 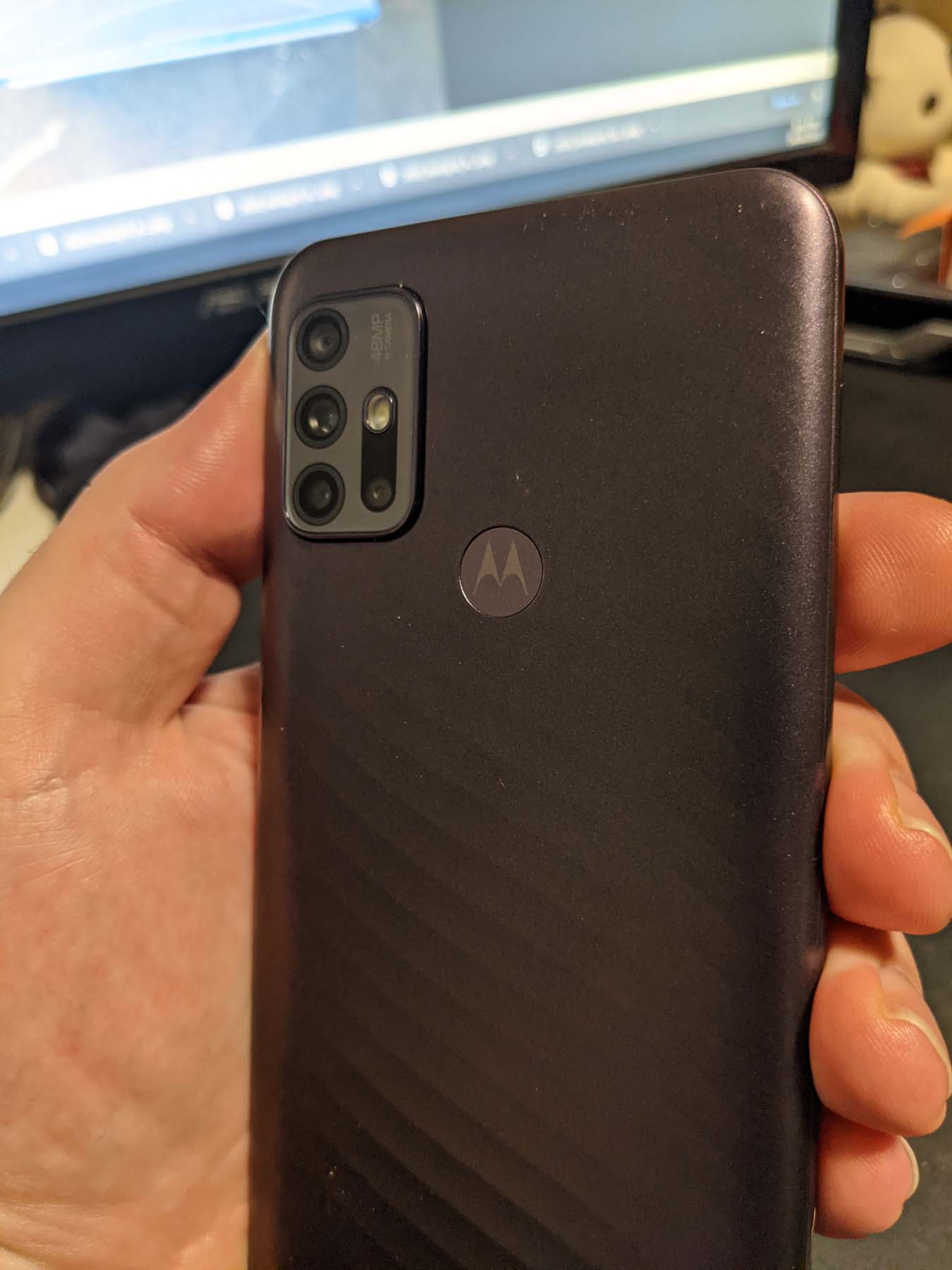 Not for frantic multitaskers

Part of the reason you get fantastic battery life at a budget price is because the Motorola Moto G10 doesn’t have the most powerful innards. On paper, the combination of 4GB of RAM and a Qualcomm Snapdragon chipset is a decent start, but this is clearly a hardware combination designed for basic everyday use.

In practical terms, get used to a slight delay for most tasks from logging in to multitasking and sometimes even on text input. The fingerprint scanner on the back of the phone works really well for logging you in, but the vibration indicating it’s detected your fingerprint alongside the input vibration for typing both emphasise the slight delay between input and things happening on screen.

During my tests, there were times when the delays were longer, most notably when waking the phone up after not using it for hours, where I’d occasionally get a message telling me the phone is starting. After a few seconds, it was back to the usual slight delay.

Realistically, you shouldn’t expect to play demanding games on the Moto G10 but, as long as you don’t mind the slight delay when opening or shifting between apps, this budget handset does an admirable job of handling everyday tasks.

It’s powered by Android 11 with not much in the way of custom tweaks, outside of a helpful preinstalled Moto app that talks you through the practical parts of Android 11 and lets you personalise it. There’s also some simple gesture commands that you can enable or disable for user-friendly features that let you quickly access the camera, torch, screenshots or unlocking the phone with the camera.

This last one didn’t work for me, possibly because it doesn’t like beards, because it kept telling me the image was blurry when it looked fine on the screen. That’s not too much of an issue if you’re used to or prefer logging in with a passcode or fingerprint.

Video playback has decent results on the display, particularly in areas that aren’t super bright, but you definitely want to connect headphones because the single speaker, while functional, produces sound that hits an okay-but-tinny volume. One unique feature I wasn’t expecting was an inbuilt call recorder which, if you’re wondering how that’s handled considering the legality of call recording in certain states, has an automated voice loudly announcing that the call is being recorded as soon as you tap the button. 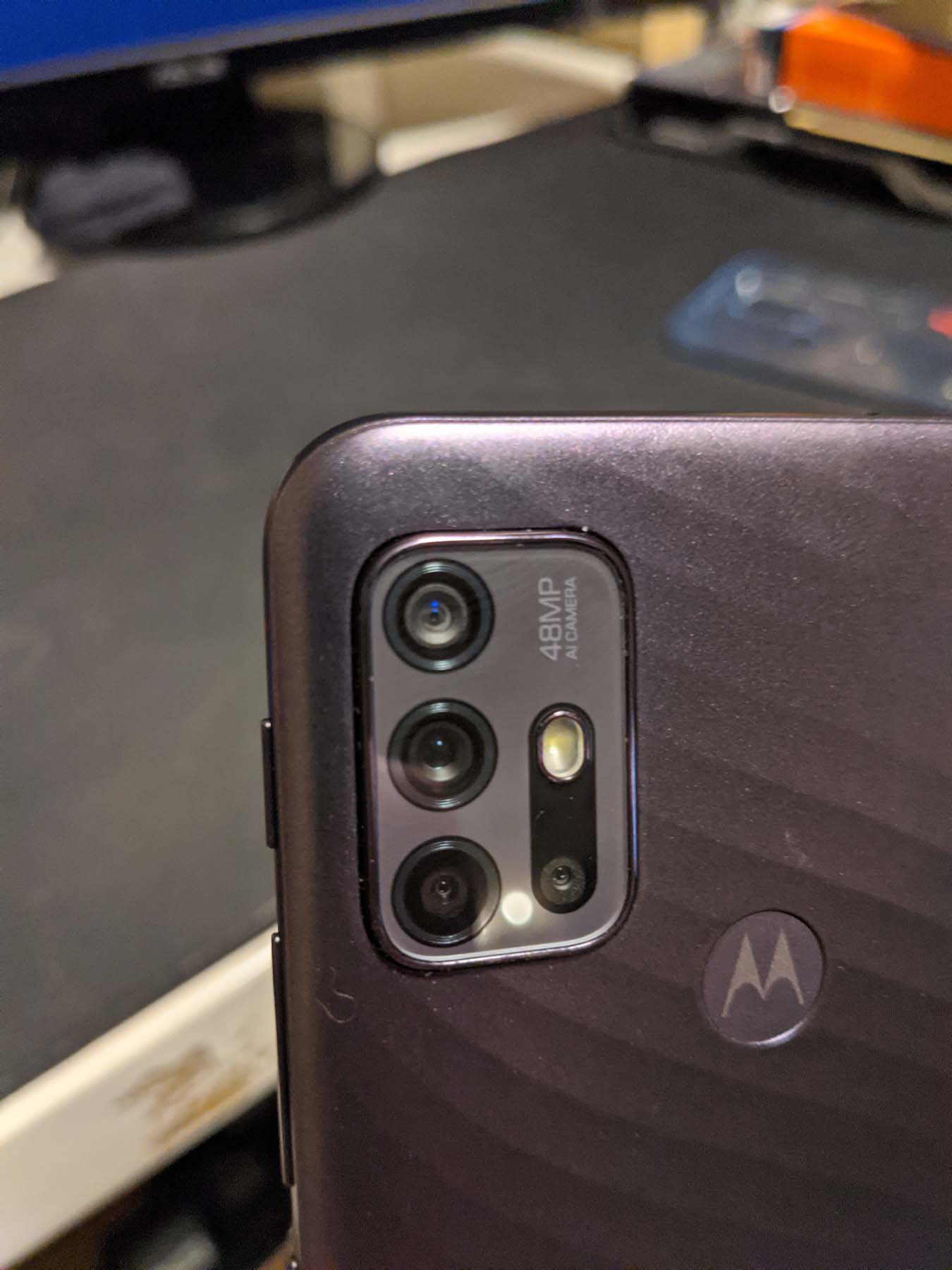 Serviceable but not flash

Performance and the camera are somewhat linked when it comes to getting the best results. While the camera is quick to load, that slight delay motif returns here to require a hair of extra patience to ensure your shot isn’t slightly (or fully) blurry.

In my comparisons for daylight photography between the Motorola Moto G10 and (admittedly, way more expensive) Google Pixel 5, it was easy to see the difference in detail. On a basic level, the Pixel 5 had more of just that—detail—while the Moto G10 tended to oversaturate shots and lose detail particularly in well-lit sections. It also prompted me to activate night mode in a well-lit (not fully lit, mind you) room during the day. The selfie camera had similar issues in my comparisons, too.

You can use up to eight-times zoom, but you’ll want one hell of a steady grip to pull those off. While smartphone zoom to this degree isn’t entirely practical on the best of days, my best handheld results looked like the washed-out results of a smartphone from yesteryear spliced with a pastel Instagram-like filter. In short, zoomed pics on the Moto G10 don’t look great unless you’re trying to replicate something akin to the famous bigfoot photo. 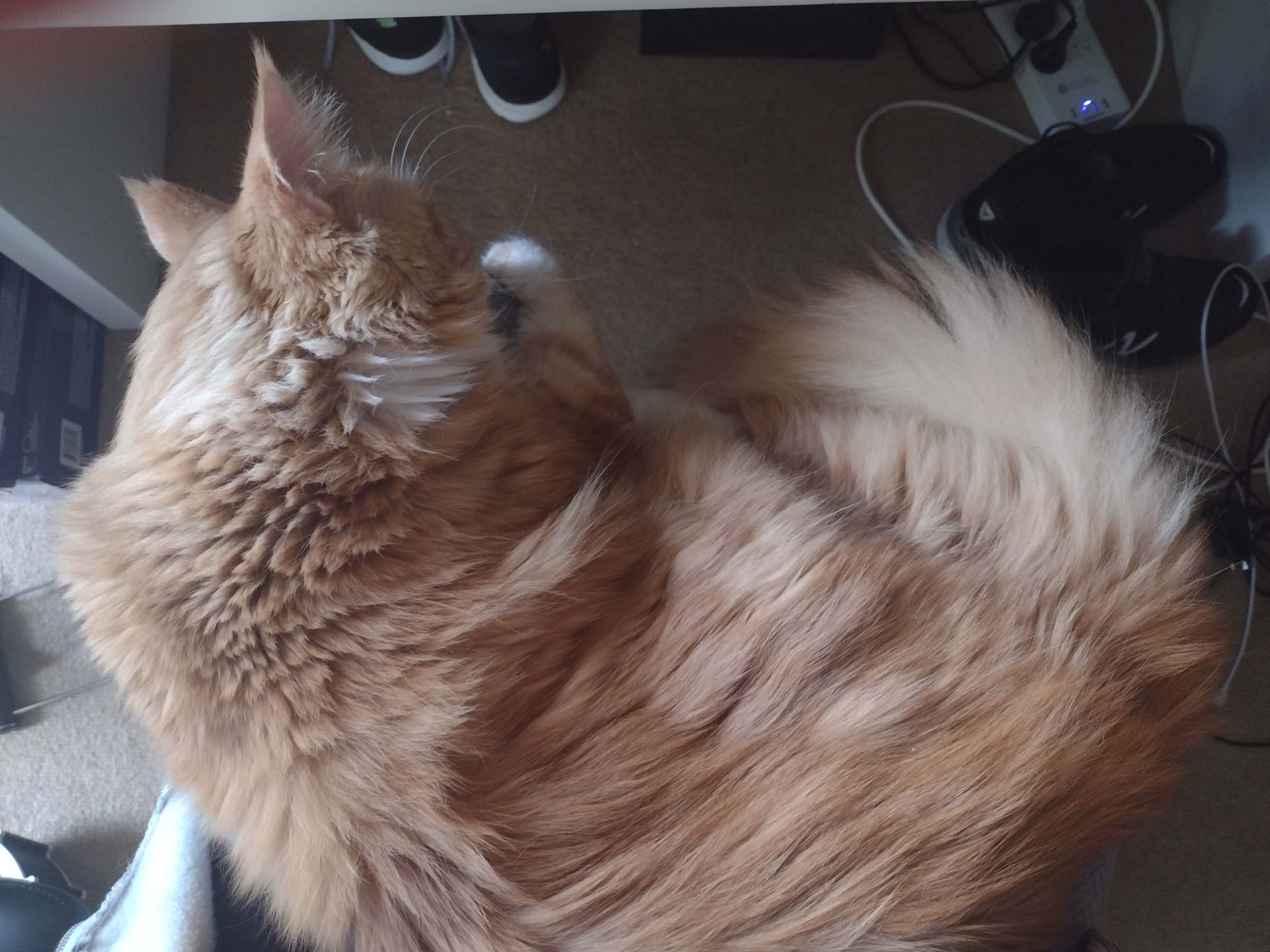 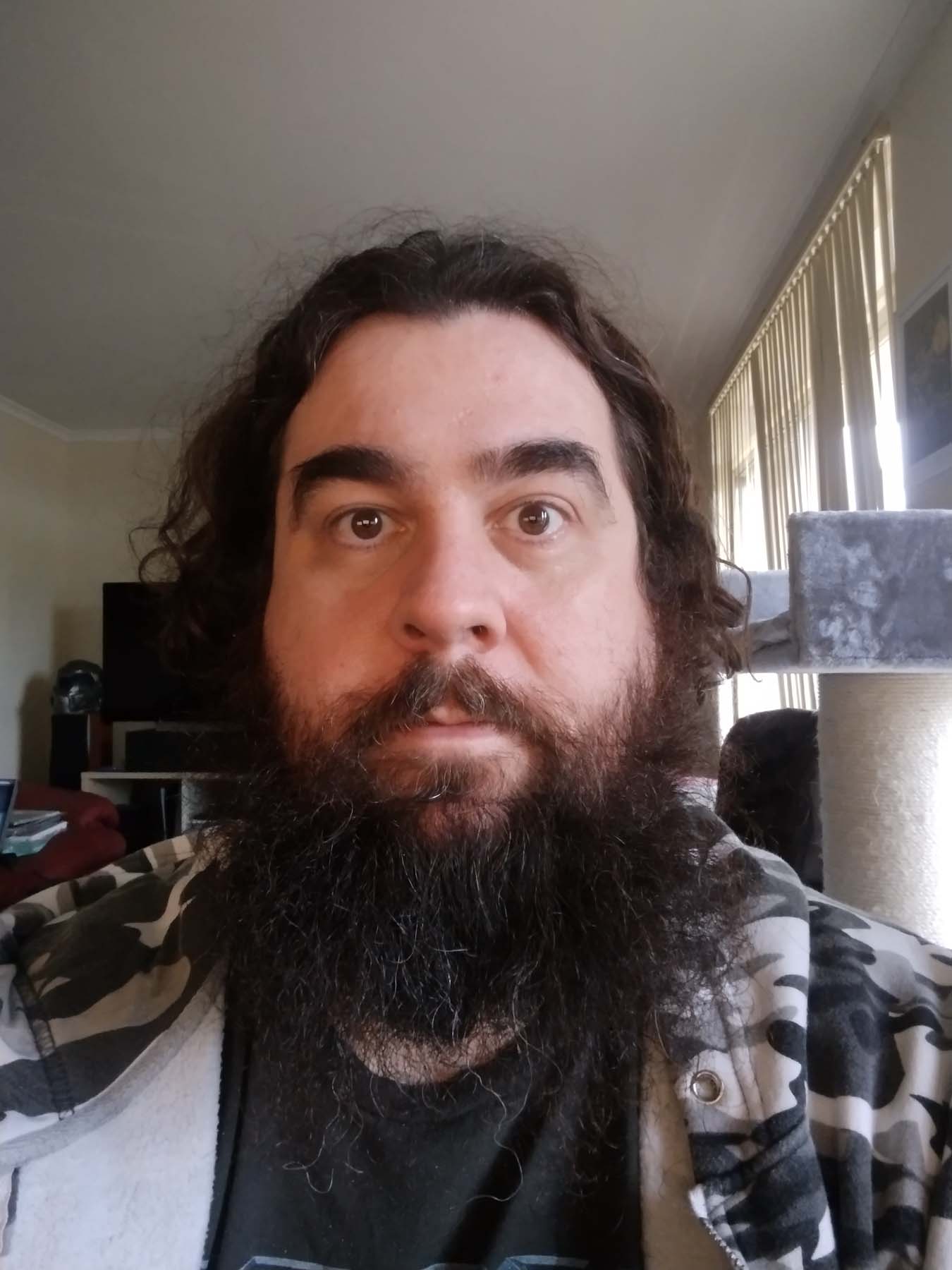 2 / 3
It's a similar story with the selfie camera.
Share: 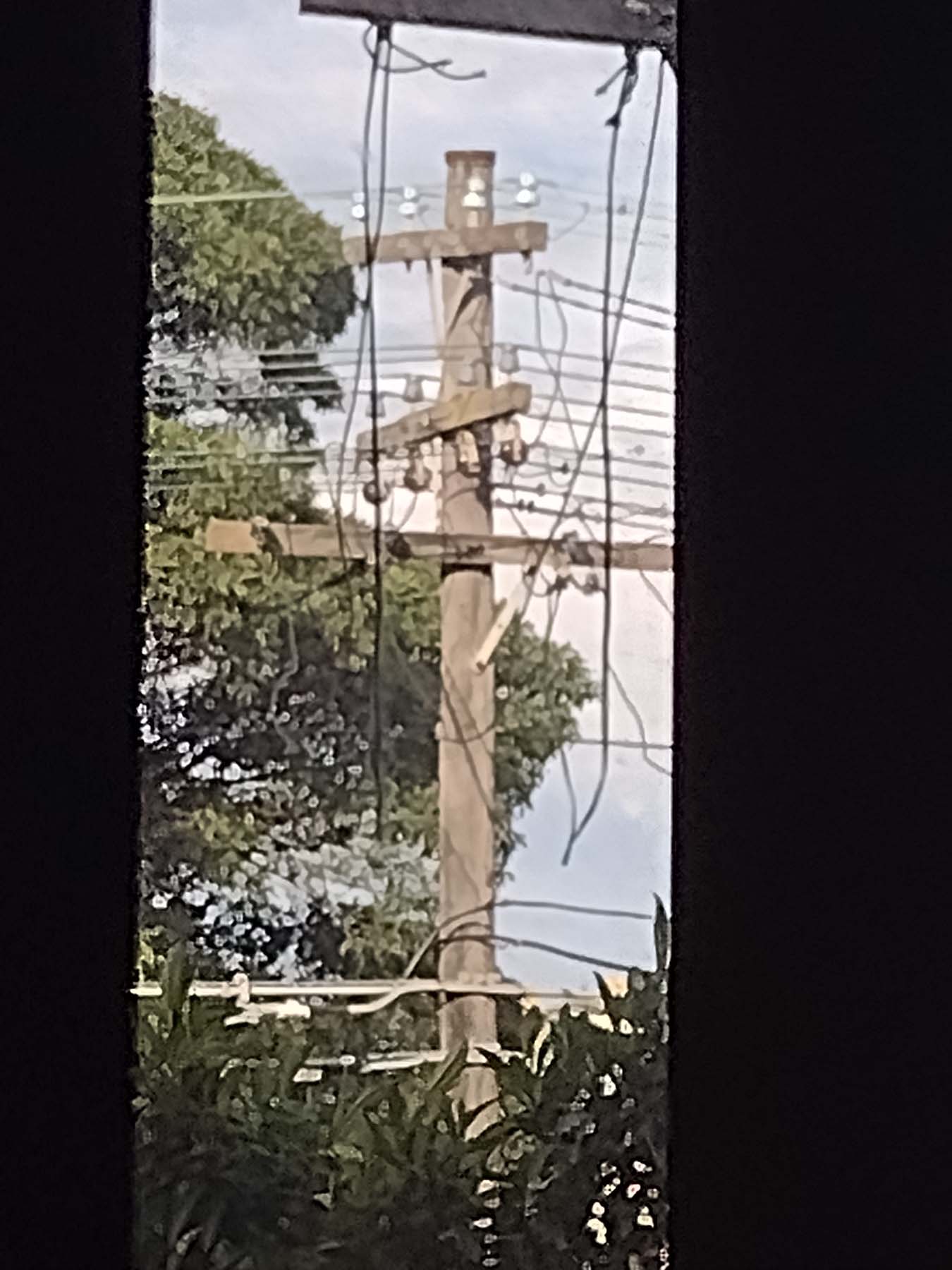 Is the Motorola Moto G10 worth it?

Unless you’re looking for a speedy performer and fantastic camera, the Motorola Moto G10 is absolutely worth considering. Those keen on something faster with a higher-quality camera should expect to pay closer to mid-tier prices. But for anyone seeking a budget everyday smartphone that has plenty of battery life, the Moto G10 may just be your next handset purchase.