5G vs 4G: Will the network upgrade be worth it?

Ever since the Australian 5G rollout kicked off, there have been a lot of questions levelled at the new network technology - some good, some very, very bad. One of the biggest questions Australians want answered is how different is 5G from 4G exactly? 4G mobile networks already deliver speeds up to 50Mbps which is more than enough to watch Netflix or make video calls, so what’s all the fuss?

It’s a fair question to ask about such a monumental, not to mention expensive, project but in reality, faster speeds are just one part of the 5G>4G equation. There are a few reasons why the upgrade to 5G will be better for Australians in the long run. Let’s take a look.

5G is faster than 4G

Although faster download and upload speeds are just one benefit of the 5G upgrade, it’s still a good place to start. 5G is a lot faster than 4G. Different 5G and 4G technologies have different theoretical maximum speeds. We go into that more in our guide to 5G but for now, let’s stick with the real-world results tracked by the network monitoring mob Opensignal.

That’s about five times as fast for 5G users.

We’ve averaged out those speeds from Opensignal’s results across all three networks but here are the network averages from the original report.

5G vs. 4G speeds in Australia

To be clear, these are just the average speeds experienced by the users that Opensignal has monitored. Even in its current state, 5G has the potential to be a lot faster. Our mates at WhistleOut did some boots-on-the-ground testing and managed to get over 1,000Mbps on the Telstra 5G network using an iPhone 12 Pro Max in Epping.

To give you an idea of how much faster that is, we used flight durations to demonstrate how much time you could save by using a 5G connection. 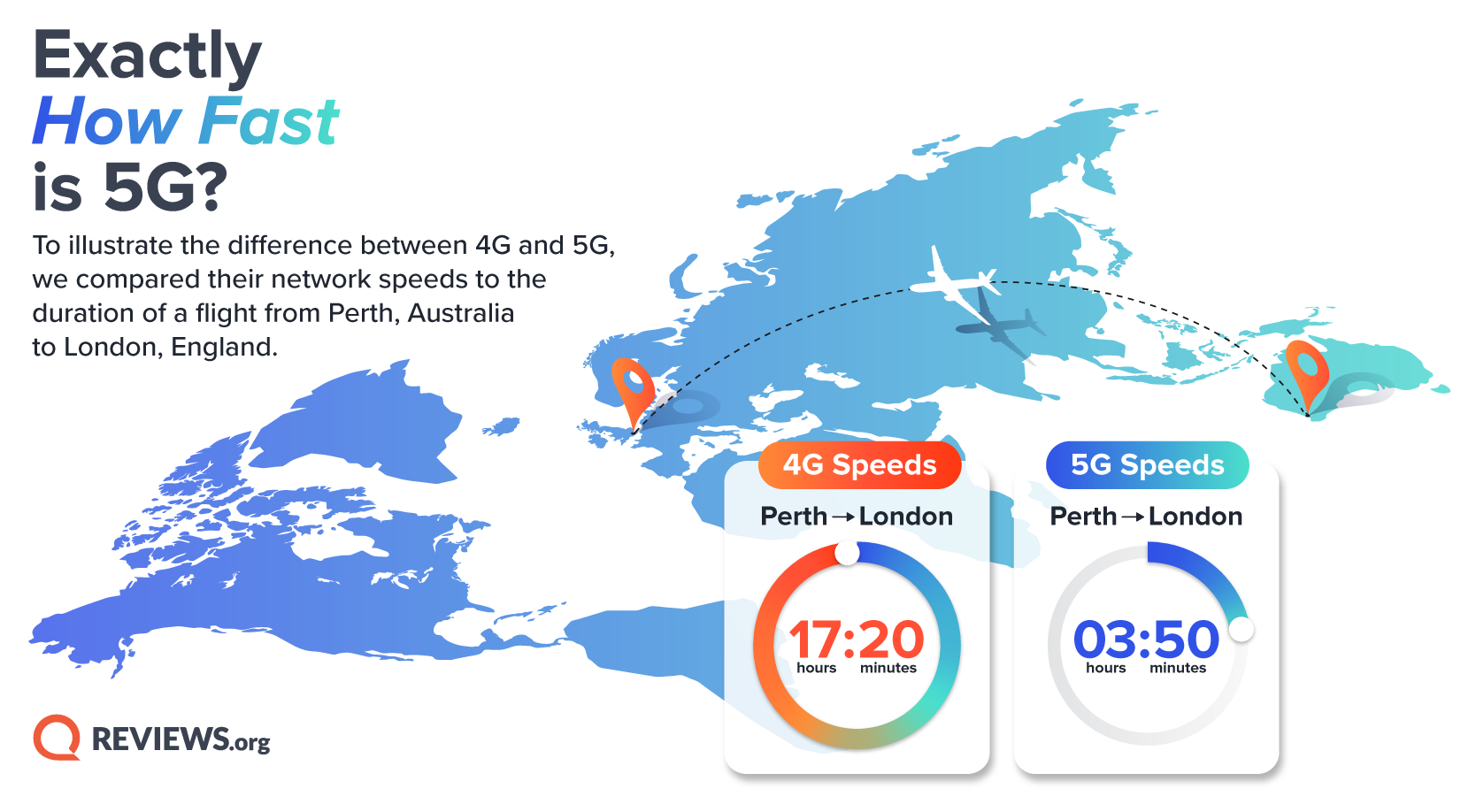 Okay, so it’s fast. Like, really fast. But who cares? Whoop de doo. As we’ve already said, you can already manage most online activities on a trusty 4G signal, right? Absolutely. 4G is more than capable of FaceTiming, streaming Netflix and listening to Spotify, but streaming isn’t the same as downloading.

Over the past decade, digital sales of TV shows, movies and video games have grown exponentially. Meanwhile, technological advancements in those areas (like 4K and 8K resolution) have resulted in much larger file sizes. These days, certain video game files are pushing 100GB and above (take one look at Call of Duty: Warzone). Not only that but video games, video game consoles and most internet-connected devices for that matter, require regular software updates ranging from a few MBs (megabytes) to a few GBs (gigabytes).

Download speeds can vary based on a variety of factors. Still, the difference between 4G and 5G could mean waiting a few hours for a game or series to download, and waiting a few minutes, seconds even.

More futuristic applications, like self-driving cars, 5G healthcare technologies and automated agricultural solutions, will all be made possible by the 5G rollout. 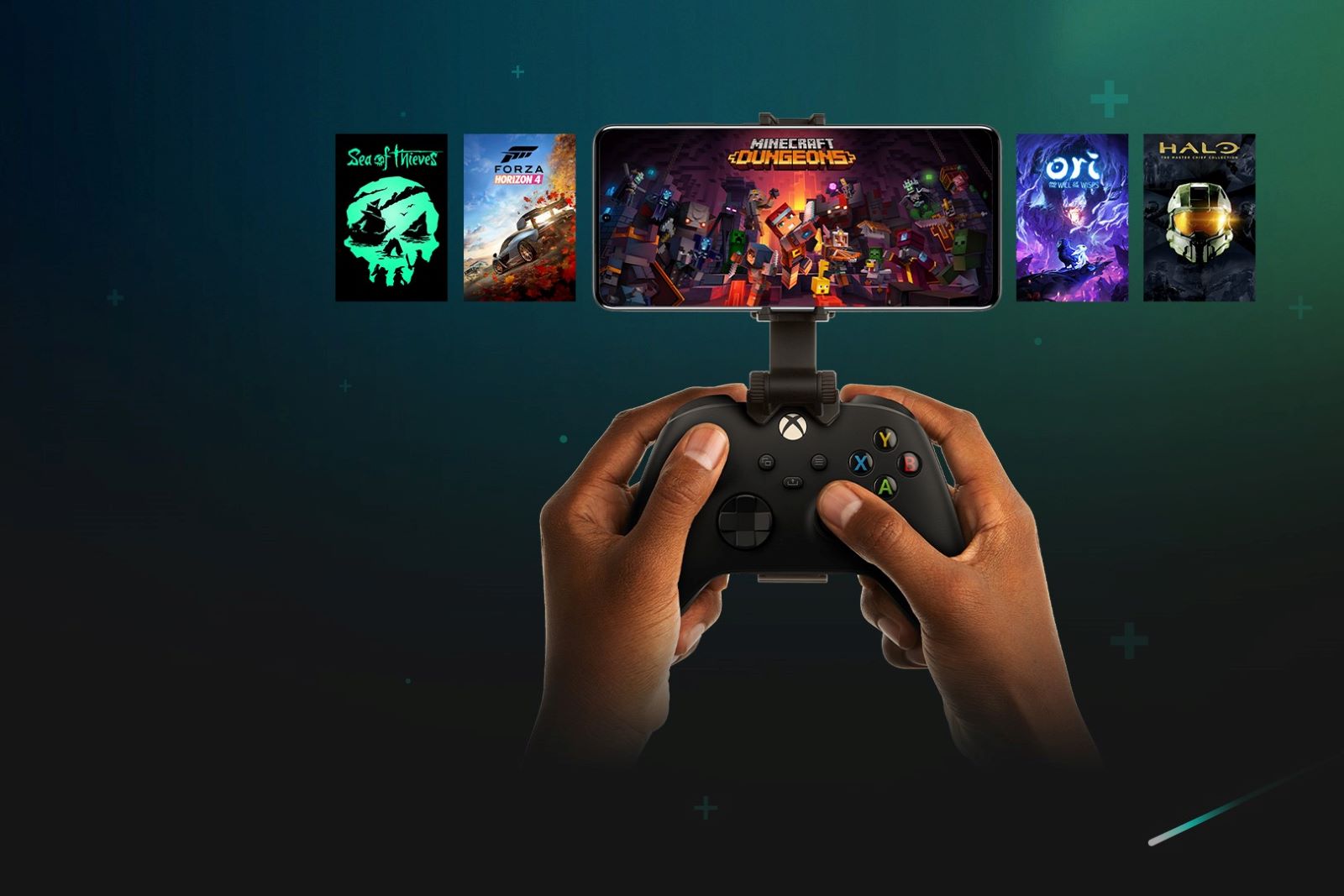 Console quality games streamed to mobile devices is slowly becoming a reality with services like xCloud.

5G is catching up fast

While 5G coverage still can’t be considered the standard in Australia, it’s come a hell of a long way in the last year. Recently, Telstra hit a huge milestone when it announced its 5G rollout had made its way to 75% of Australia’s population, which covers all the major cities and then some (in population size). It’s still a ways off Telstra’s 4G coverage, which reaches a whopping 99.4% of Australians but it’s great progress.

Take a look at the coverage map below to find out whether you’re eligible for Telstra 5G in your area.

Unlike Telstra, Optus and Vodafone haven’t made any official claims about population coverage. Along the road, both providers have thrown out numbers on households and towers connected but there’s nothing as concrete as Telstra’s 75% coverage claim.

Still, using Opensignal’s reach score and the differences between Telstra, Optus and Vodafone we can hazard a guess. In Opensignal’s last 5G report, Telstra scored 3.5 for each, while Optus scored a 2.3 and Vodafone a 1.2. If development has continued at that pace, Optus 5G would be nearing 50% of coverage for populated Australia while Vodafone 5G would be closer to 26% of coverage. Those are some very broad estimations but they illustrate just how far Telstra’s next-gen network has come.

One important consideration about coverage is that all three networks only make claims about 5G outdoor coverage at this stage. That’s because the high-frequency spectrum that 5G uses, while great for download speeds, struggles to penetrate walls and obstacles as well as lower band frequencies. You could be enjoying red hot 5G speeds in your backyard while struggling to get a signal inside. It’s a big hurdle for 5G connections. Thankfully, most devices will revert to 4G when the signal isn’t strong enough but it might not bode well for activities like gaming, which are typically done inside.

If you are running a 5G home broadband connection and you’re struggling to get a good signal in your gaming room, we recommend shifting things around so you’re closer to a window. Some 5G modems, such as the Nokia 5G FastMile offered with Optus 5G Home, even point you towards the closest tower so you can place it in the optimal position.

5G has a lower (better) latency than 4G

When people discuss internet speeds, the focus is often squarely on download and upload speed but latency is another incredibly important metric to consider, especially for online services that are streamed in real-time (like video calls and online gaming). Latency is measured in milliseconds (ms) and is used to quantify the RTT (Round Trip Time) of your internet connection. It's essentially the amount of time it takes for your device to send and receive data.

In the simplest terms, latency measures the length of time between pressing a button and the response on the screen in front of you. For example, if you're playing an online shooter, latency is the amount of time between clicking to fire a gun and the character firing that gun on screen. You obviously want that delay to be as short as possible, infinitesimal - otherwise, you feel cheated.

The lower the latency, the smoother your experience will be.

Lower latency is part of the 5G promise but there isn’t any hard data on exactly how much better it is or will be for Australians.

The average latency for 4G can be anywhere between 30 and 50ms while 5G averages hover around 21ms, sometimes lower. Referring once again to WhistleOut’s 5G speed test report, the team found in their tests that, on average, Telstra 5G tests yielded a 15.67ms latency, Optus 5G averaged 15.26ms and Vodafone a little higher at 21.09ms. That’s 17.34ms on average. Those are impressive results, comparatively.

The early results show promise for a low-latency 5G future but there’s still a ways to go before 5G becomes a suitable replacement for fixed-line broadband connections. In the most recent broadband speed test report, the ACCC recorded an average latency of 11.54ms from the 10 NBN providers it tracks.

When the 5G rollout first began, there was a fair bit of back and forth about whether providers would charge a premium for the next-gen network. For now, Optus and Vodafone won’t charge you any extra for 5G. For both providers, 5G connectivity is ubiquitous across every postpaid plan offering. It’s not even a factor you have to consider when signing up. The only difference between the two providers is that Optus doesn’t offer 5G on prepaid, whereas Vodafone does.

Here’s a quick look at the most popular 5G plans from Optus and Vodafone.

On the other hand, Telstra will force you onto a more expensive plan if you want 5G. For example, Telstra doesn’t offer 5G on its cheapest Upfront SIM plan, only on the $65 plan and above.

Here are the Telstra plans that offer 5G.

Is the 5G upgrade worth it?

It feels like yesterday when Australia's onion-fuelled Prime Minister told a bunch of broadband-hangry Australians that "25Mbps is going to be more than enough for the average household" during an NBN policy announcement. That was way back in 2013 and even then it was a gross underestimation of Australia's broadband needs. But here we are in 2021, and 25Mbps is still the maximum potential speed for a lot of Australians on Fibre-to-the-node (FTTN). The point is, what's considered fast or even serviceable today will likely be considered slow another ten years down the track. 5G might not seem like a necessary upgrade now but its rollout will ensure Australians won't be left in the dust as new technologies demand faster and more reliable internet connections.

The results from the tests above speak for themselves. 5G is a much faster and more reliable mobile technology than 4G that has practical uses inside and outside of the home.

Does that mean you should rush out and buy a 5G-compatible phone or sign-up for a 5G mobile plan? No. Not yet at least. But over the next decade, 5G will slowly become the norm and we'll be better off for it.