With the Bespoke Jet, Samsung is coming for Dyson's stick vacuum crown. 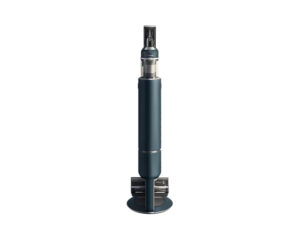 No one truly likes vacuuming. I mean, it's not as bad as scrubbing the toilet, but it's not enjoyable. It's why we try and outsource it to robots and pray to god they don't run over your puppy's "accident".

Samsung seems to have taken this in mind with the Bespoke Jet. It's a thoughtful product that considers how people use stick vacuums, and manages to eliminate - or at least, mitigate - a  lot of the pain points.

It sucks when your vacuum gets jammed, runs out of charge while you're cleaning, or when debris gets everywhere you're emptying the bin. They're all reasons to put the chore off. And while the Bespoke Jet doesn't solve every issue completely, it makes them less of a hassle, and smooths out the vacuuming experience.

It's hard to fault the Samsung Bespoke Jet on anything but price. It's a thoughtfully designed stick vacuum that genuinely helps address common pain points. 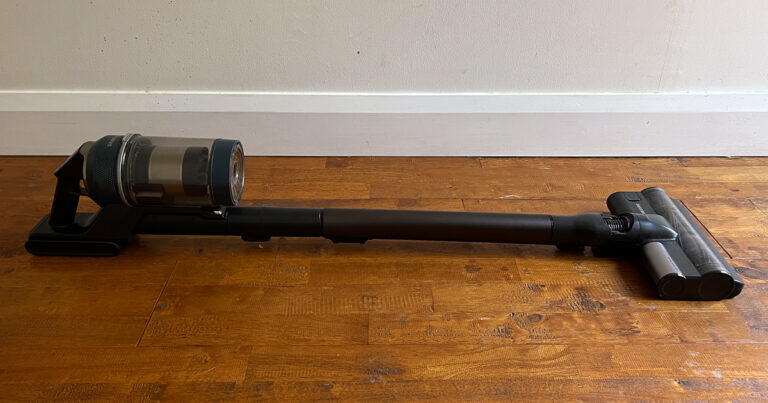 How much does the Samsung Bespoke Jet cost in Australia?

At full price, you're looking at either $1,299 or $1,399 for the Samsung Bespoke Jet, depending on what accessory configuration you want. This makes it pretty competitive with high-end Dyson models (especially considering they don't include docks), and cheaper than what LG is charging for its premium models. 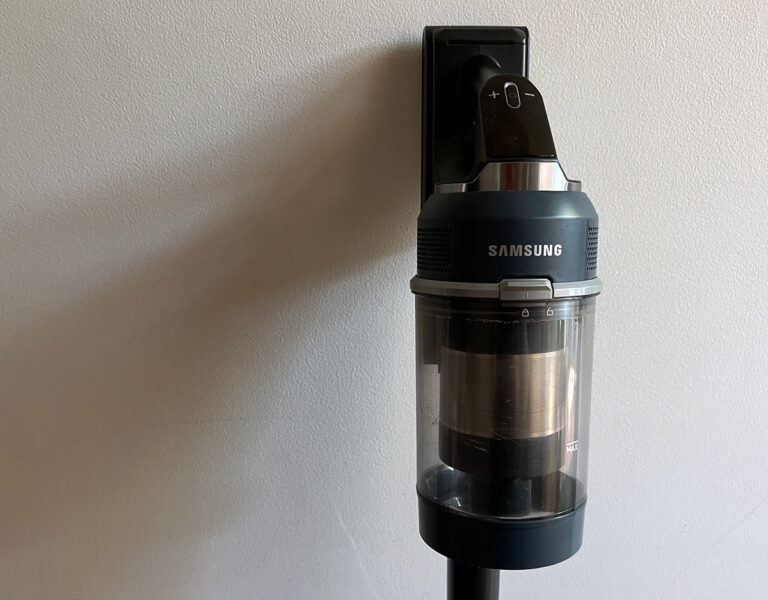 No matter how fancy a vacuum cleaner is, the core functionality is what's important at the end of the day. I hate to make the same tired old joke, but you want your stick vacuum to suck, and the Bespoke Jet certainly does. The Bespoke Jet offers four levels of suction, and does a pretty admirable job of cleaning even on the default "mid" level. It handles smaller particles and debris with ease.

I've found I needed to crank it up to "max" or "jet" from time to time when it comes to sucking up larger objects - like toilet paper rolls or sticks my puppy tears up and leaves scattered around the house. The Bespoke Jet does a pretty good job with cleaning up matter that could easily jam lesser vacuums.

Of course, the Bespoke Jet isn't immune from getting jammed itself. This didn't happen too often, thankfully, and the for the most part, was limited to when trying to push it to its limits with the aforementioned broken sticks and torn apart toilet paper rolls.

Even if the Bespoke Jet does jam, the handle's LCD display gives you a specific error message based on what's clogged. This makes any issues so much easier to solve when something goes wrong. In the same vein, the main brush heads are pretty easy to clean thanks to buttons that entirely release the roller.

When you're not using the Bespoke Jet, it sits in a docking station - known as the Clean Station - that also empties out the vacuum's barrel for you. The debris gets whooshed into a bin bag, that you then swap when full. The actual emptying process is pretty effective, but there have been a few times I've had to manually remove some rubbish from the barrel because a chunk of plastic or some dog fur got caught.

The bin bags in question are a proprietary Samsung product and you'll get three in the box. When you run out, a five pack will set you back an extra $29.95. Samsung says each bag should last between two and five months, but I managed to get through one in six weeks. Admittedly, I tend to vacuum more than the average thanks a puppy who loves to create mess.

It's worth noting the dock won't work without a bin bag, but you can still manually empty the vacuum yourself. Samsung has also said that it intends to keep making the disposal bags whilst the Bespoke Jet vacuums are in market. Hopefully, this will be quite some time. While proprietary nature of the bags can be a bit concerning, the hassle-and-mess-free nature of emptying out both the Bespoke Jet and the dock make offset the manufacturer lock-in.

Importantly, the charging dock is a standalone fixture - it doesn't need to be wall mounted, which makes it very renter friendly. All it needs is a power point. 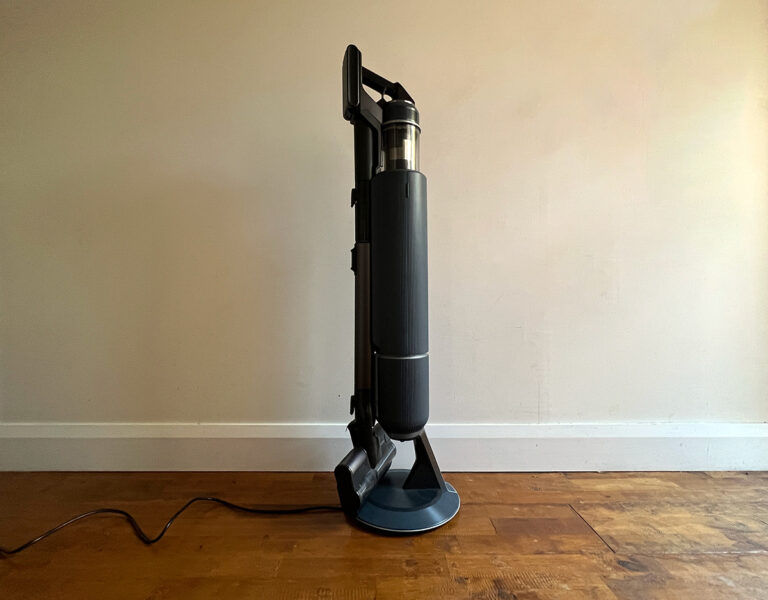 When it comes to ergonomics, the Bespoke Jet is top notch. It's adjustable in length, which isn't always a given when it comes to stick vacuums. You do however need to shrink it back down to its regular size to dock it, however.

The Bespoke Jet weighs in at 2.7kg, which is pretty light for a stick vacuum, but not as light as more compact models such as the Dyson V12 Detect Slim.

Aesthetically, Samsung has gone for a mostly restrained design. It doesn't have the style or colour of Dyson, with the Bespoke Jet feeling a bit more pragmatic. More like an appliance than a piece of retro-futuristic sci-fi paraphernalia. The build quality is great - everything clicks together nicely, and no part of the Bespoke Jet feels flimsy.

As aforementioned, you'll find an LCD display on top of the Bespoke Jet. When it's not showing you errors, it reads out the level of suction you're using and the exact amount of battery remaining.

Samsung says the Bespoke Jet can get up to one hour per charge, but the reality isn't quite as good. You'll only be able to get this level of longevity when using the lowest suction setting with a brush head that doesn't require any additional power. At medium suction with a motorised brush head, you're looking at around 25 minutes per charge. If you max out the vacuum to "jet" suction,  you'll only get around eight minutes of run time.

For me, the 25 minute run time has been generous enough. It's enough to tackle my three bedroom place, and even vacuum the dog fur off the couches.

Any battery life concerns are also offset by how effortless the Bespoke Jet is to charge. You don't need to think about it, you just dock it and it does its thing. Every time I've picked it up, it's been full. And if you're in a larger place, the Bespoke Jet also includes a spare battery that can be charged using the accessories cradle. 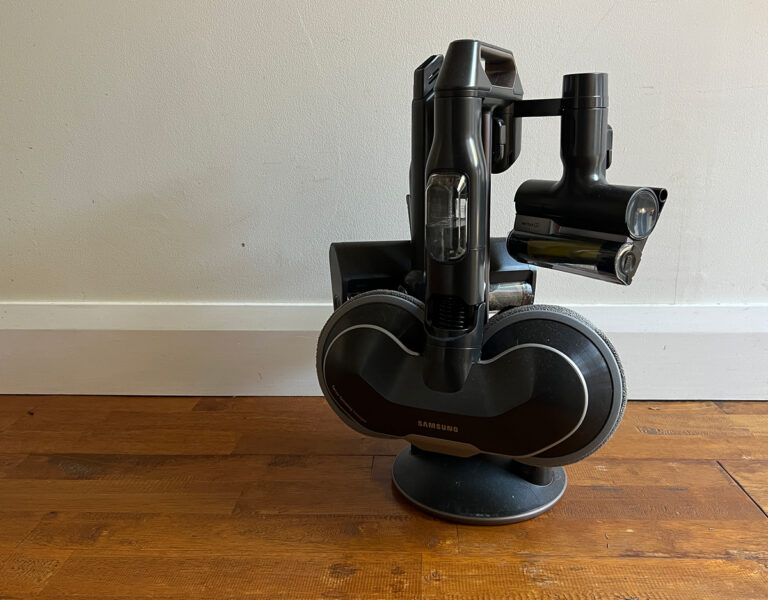 The accessories cradle is another one of those inclusions that help elevate the Bespoke Jet. In addition to charging your battery, it also acts a convenient place to stash all your brush heads when you're not using them. It's easy enough to carry from room to room in a larger house, and I'm just a big fan of having a simple storage solution - especially cause the Bespoke Jet comes with a whole lot of brushes.

If you don't want to spring for the Elite Extra, I'd recommend the Pro Extra for the mopping attachment. It's essentially two spinning pads with a water reservoir, and it does a surprisingly good job. You may need to do scrub some tough stains yourself, but it's far more convenient than using a good old fashioned bucket and a mop.

The pads are removable and can be washed. If you need extra, a set of four will set you back $25. Internationally Samsung sells pre-soaked disposable pads, but these aren't available in Australia (although my review unit include one set).

Is the Samsung Bespoke Jet worth buying? 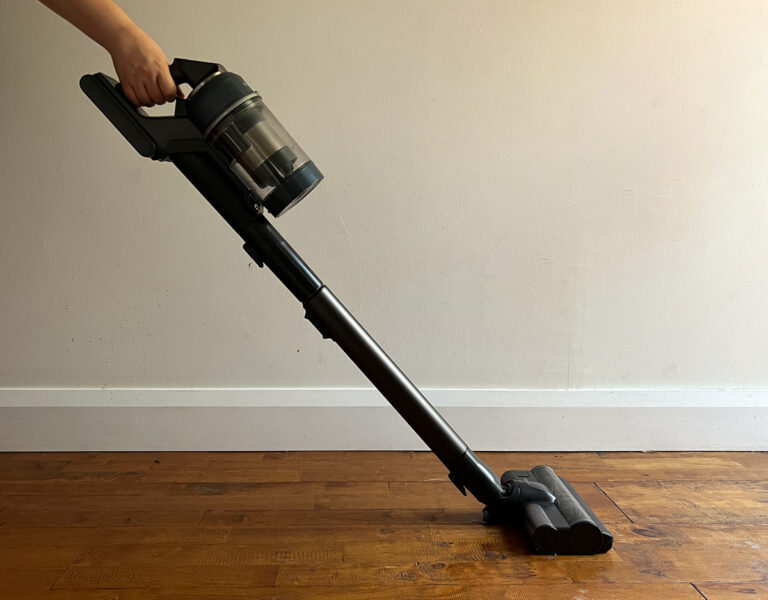 The Samsung Bespoke Jet makes the vacuuming experience that little bit easier, which is no simple feat. It addresses a lot of common pain points with stick vacuums, which in turn, may even have you vacuuming that little bit more. The Bespoke Jet is undeniably a premium product, but it's also one that genuinely removes some tedium from the chore. And even if vacuuming is still kinda rubbish, at least you won't find yourself swearing at the Bespoke Jet in frustration.