Dyson's V12 Detect Slim does a great job of vacuuming but it needs a heavy, helping hand the whole way through. 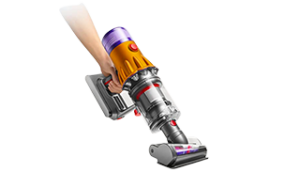 When you think ‘vacuum cleaner’, you think ‘Dyson’. The brand is synonymous with sleek, and powerful devices and the V12 Detect Slim lives up to that expectation, but it doesn’t live up to the hype. People hail Dyson vacuums as the answer to your floor follies, and yes the V12 does a great job of vacuuming but it needs a heavy, helping hand the whole way through.

Over an hour battery

Chamber is too small, and gets clogged easily

No renter-friendly storage solution for accessories or device itself

Probably not for pet owners

Morbid curiosity can drive you to do questionable things, like slowing down as you pass a car crash, or binge listening to three hours of murder podcasts. Lately, thanks to the Dyson V12 Detect Slim my curiosity has led me to the depths of the cracks and crevices behind my cabinets. Lit by a green, precision glow, I can’t stop searching for the highlighted piles of dust simply for the satisfaction of vacuuming them up.

It’s picking a scab, it's popping a pimple. It is disgusting and somewhat horrifying, and yet I can’t turn away. 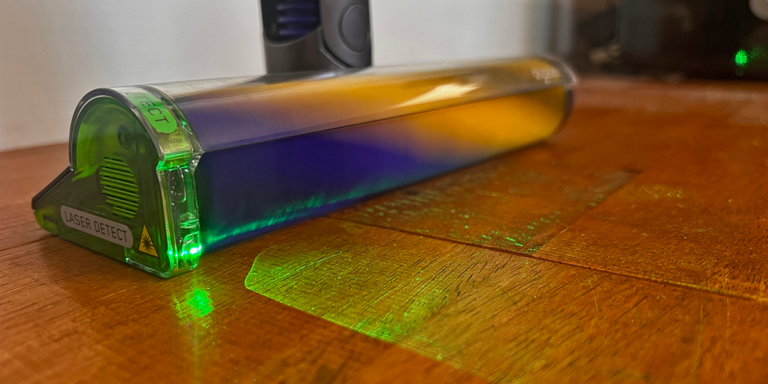 How much does the Dyson V12 Detect Slim cost in Australia? 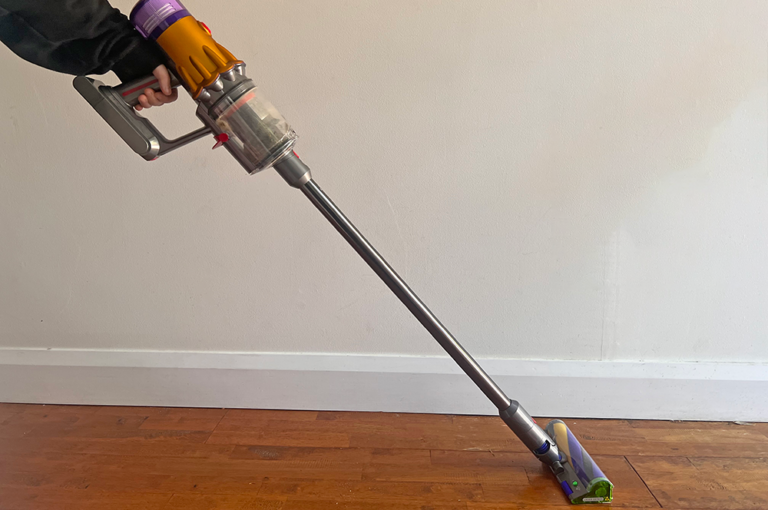 There is something about the macabre that can entrance you. For some people it’s horror movies, or murder podcasts, or pimple popping videos - it’s gross and unsettling, but you can’t stop. For me, it’s the laser Dyson uses to show you tiny dust particles as you vacuum. It is horrifying to see just how much dust has been accumulating beneath my feet, but I refuse to stop freaking myself out over it.

Fortunately the V12 not only shows you the microparticles of dust gathering around your home, but it also takes care of the problem. The vacuum makes light work of most junk that amasses on your floors. Any of your normal dirt, grime, hair, fur, and even larger pieces of debris should be sucked up with no issues. Not everyone will have the opportunity to become a dust mite detective with the Dyson though. The only attachment that has the laser functionality is the microfibre Fluffy cleaner head. This is for hard floors only, so if you are in a mostly carpeted home then you’ll have little use for it.

While all the attachments that come with the vacuum work well enough, there are of course limitations. My dog likes to destroy sticks and cardboard, and while the Dyson’s Direct Drive Cleaner Head does an okay job with her handy work, the path of destruction can never entirely be cleaned. Similarly the Hair Screw Tool was no match for my shedding Kelpie. It put up a good fight, but it just couldn’t pick up most of the fur off the bed or couch.

That is to be expected with any kind of stick vacuum, but the V12 does pick up more than I would have anticipated considering the size of the barrel. Anything under 3cm for general debris was no problem, but larger pieces caused immediate blockages which became increasingly difficult to dislodge. More on that in a minute.

Another one fights the dust (and the dust fights back)

Large fragments didn’t cause too many issues with the Dyson V12, but inexplicably dust did. Enraptured by finding the miniscule dust particles around my house, a quick tidy turned into an hour of vacuuming, and the Dyson got blocked several times. Each time I dislodged the blockage it was nothing more than dust, and admittedly some (but not a lot of) fur.

While the barrel and the cleaning heads whirred on, it was the entrance to the dust chamber that was consistently getting blocked.  There isn’t enough space between the entry to the chamber, and the wall for the debris to get sucked through efficiently. A larger chamber, like on the V15 would most likely fix the problem but the V15 also doesn’t have the laser, so using it I’d probably be less likely to delve into all the dust mite nests.

When a blockage occurred in the barrel however, I needed to spend more time cleaning the vacuum to fix the blockage than it takes to vacuum my whole house. When something got stuck in the long barrel I had to get at it with chopsticks, stuck together to make a longer stick to try and push or scoop the debris out.

I’d love to see Dyson vacuums come with cleaning utensils designed to work with the curves and structure of the build. Cleaning out a vacuum is always going to be the most laborious part of vacuuming, so any steps towards making it less painful are headed in the right direction.

Despite the blockages, the V12 clearly has a lot of power and manages to balance this out with a great battery life.

Regardless of floor type the vacuum picks up most debris efficiently which can be attributed to the auto-adjusting suction feature. As opposed to other vacuums where you need to toggle the amount of power you’re using, when the Dyson needs greater suction, it automatically adjusts to do so. Chances are this is also why the V12 Detect Slim has such a long lasting battery.

I went through a three bedroom house, vacuuming twice, using the dusting attachments, and getting sucked into finding every spec of dust, and the battery was still at 22% when I finished up. This came to about an hour of active vacuuming, which is a massive improvement on the battery life on stick vacuums which in my experience find it hard to last 20 minutes.

One downside of the Dyson, is that it simply isn’t rental or storage friendly. Generally the vacuum only comes with a wall mount for storage, which isn’t useful if you have a landlord that doesn’t want you putting holes in the walls. I resorted to just leaning the vacuum against the wall near a powerpoint, where it would randomly fall down with a thud. You can upgrade to the Dyson V12 Detect Slim Absolute Extra package which gets you a floor dock for an extra $150. Apart from a singular Want storage clip in the Absolute Extra package, there are no storage options for the multiple attachments that come with the vac. Having the attachments allows for a deeper clean, but having them scattered around the house is counterproductive. Even a small, cheap, drawstring bag would suffice.

Is the Dyson V12 Detect Slim worth buying?

The Dyson V12 Detect Slim is an good stick vacuum but it isn’t the best choice for everyone, and it isn't the best full stop. If your home is primarily carpet then you’ll be paying a premium for a laser precision head that isn’t in your best interest to use, if you’ve got pets that shed you may be disappointed with the Hair Screw Tool, and in the end you may find yourself becoming the vacuum cleaner.

If you don’t tick those boxes then the Dyson V12 Detect Slim is worth considering. Factoring in the power of the suction, the excellent battery life, the satisfaction and morbid curiosity that comes with the laser-precision head, your home might just be the cleanest it's ever been.