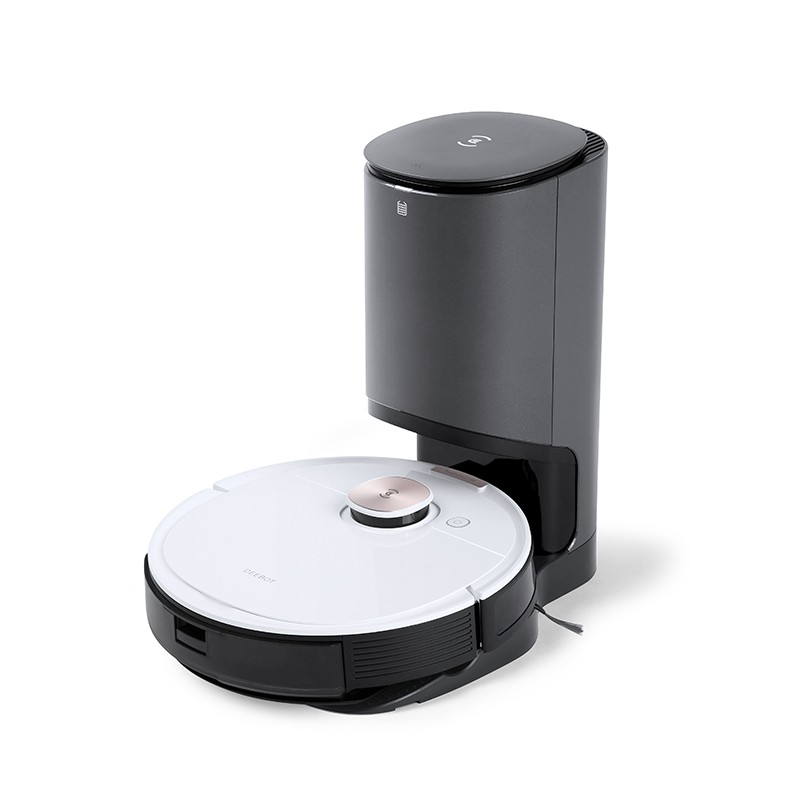 4
See at the Good Guys

Though it’s just been replaced by the newer T9+, the Deebot OZMO T8+ is still one of the best robot vacuum cleaners available in Australia. It vacuums, mops, empties itself and can map your entire home for easy navigation and stress-free cleaning. It’s not the cheapest model on the market, and we’d like to see the mop play better near carpet, but otherwise, it’s a solid choice for any household.

I’ll admit it - when it comes to chores I’m pretty lazy. Not Homer Simpson lazy, but the kind of lazy that wants the housework done with as little effort as possible. So I was pretty intrigued when the opportunity came up to test a robot vacuum cleaner which not only vacuumed for me and mopped for me but also emptied itself, leaving very little for me to do.

The Ecovacs Deebot OZMO T8+ definitely sounded impressive on paper, but given its expensive RRP, it would have to actually deliver on its promises to get the tick of approval. Thankfully, it didn’t disappoint.

As it’s about to be superseded by the Deebot OZMO T9+, there are some good deals to be had on the T8+ if you know where to look. At the time of writing, The Good Guys are slinging the T8+ for $994 (including the auto-emptying station), which is a solid discount. For a little extra cash, you can also get the Deebot OZMO T8 AIVI, which is identical to the T8, but with the addition of a camera and speaker that allow you to check in at home while you're not actually at home.

As far as bells and whistles go, the Deebot OZMO T8+ has ‘em all. In addition to vacuuming (a shock, I know), it can also mop, create a virtual layout of your home (more on this below), empty itself, and can be controlled with a voice assistant like Alexa or Google Assistant. It’s also pretty talkative, which is useful when it encounters an issue but can be switched off if you prefer your peace and quiet.

Out of the box, the OZMO T8+ comes with an auto-emptying station, four side brushes, one reusable cleaning cloth, five disposable cleaning cloths, one cloth plate and two high-efficiency filters. The robot itself is reasonably small and comes in a black and white colour with rose gold accents, while the black auto-emptying station is quite large and bulky, so it’s not exactly going to blend into its surroundings. That said, it’s there to serve a purpose, and it does it well. In the weeks of testing the OZMO T8+, averaging about one or two cleans a week, I never once had to empty the station. In fact, Ecovacs claims it can hold up to 30 days of dust and dirt before the bag will require replacement. 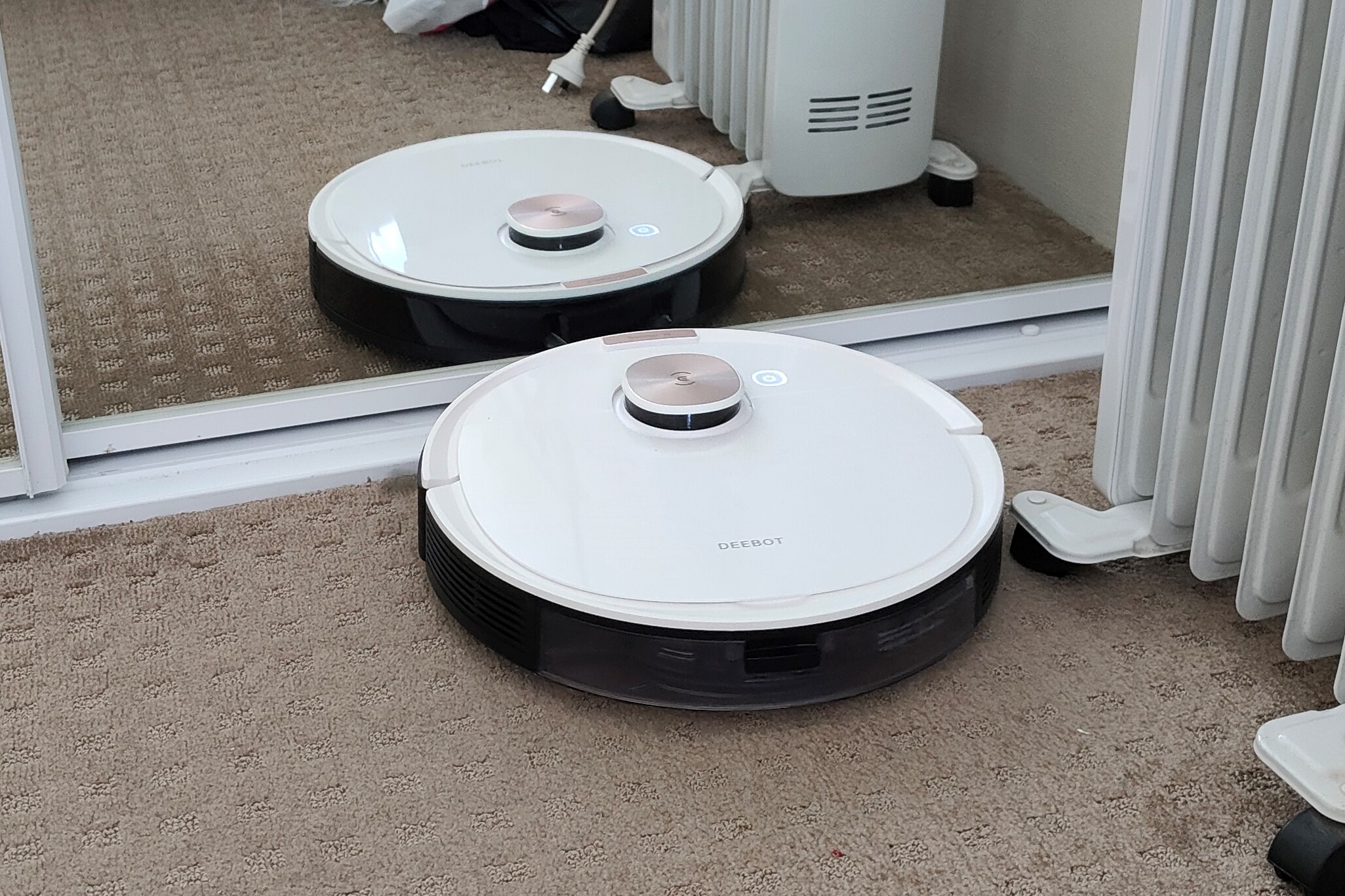 I'm starting with the vac in the mirror

Like all other Deebot models, the OZMO T8+ works with the ECOVACS HOME app, which allows you to set schedules, start or stop cleaning (even when you’re not at home), create virtual boundaries and more. Adding new Deebot robots is as simple as scanning the QR code under the hood and connecting to Wi-Fi.

A word of advice, however - make sure you turn on ‘Advanced Mode’ in the app settings before running your robot for the first time. With this turned on, once your OZMO T8+ has created a map of your home, you’ll be able to create virtual boundaries, save floor plans of different levels of your property, and even tell Deebot which room(s) you’d like it to clean. With ‘Advanced Mode’ off (which it is by default), many of these useful features won’t be available to you.

If you’ve ever tried a robot vacuum that used infrared or other low-tech sensors, chances are it copped more than a few scratches from bumping into chair legs and getting stuck in hard-to-reach corners. Thankfully, this is not the case with the OZMO T8+, which uses dToF laser detection TrueDetect 3D obstacle detection and avoidance, making it 10x more accurate than robots with traditional infrared sensors. Essentially, this technology allows your robovac to recognise obstacles and narrow spaces, meaning it won’t get stuck or collide with any of your belongings.

Compared to the much cheaper Deebot U2, the OZMO T8+ did a far better job of avoiding whatever I forgot to pick up before starting the clean. Where the U2 bravely (but stupidly) thought it could do battle with my MacBook Pro charger and emerge victorious, in the end, it’d only end up tangled and begging for help. The OZMO T8+ is smarter in many ways, but especially when it comes to robo-MacBook-charger relations, intelligently choosing to avoid the battlefield altogether.

Really, the only thing that’s capable of throwing it off is if you need to pick it up to untangle a brush or attach the mopping component. It can still continue cleaning, but it might need assistance returning to the charging dock or auto-emptying station.

In addition to creating virtual boundaries through the ECOVACS HOME app, you can also create no-mop zones. Doing so basically tells your robovac to avoid specific areas and is perfect for navigating rugs and chair mats. In my experience, the OZMO T8+ had no difficulty adhering to these boundaries.

At a capacity of 420ml, the OZMO T8+’s dustbin isn’t the largest we’ve ever seen, but since it empties itself after every clean, it doesn’t need to be much bigger. To put that into perspective, the cheaper Deebot U2 Pro comes with almost double the capacity at 800ml, though this is aimed at households with pets.

In terms of suction, the T8+ is capable of four levels of power - quiet, standard, max, and max+. As most of my home (bar the kitchen, bathroom and laundry) is carpeted, I found only max and max+ modes to be capable enough to clean the floors. Those with mostly hard floors, however, will be able to get away with the lower power modes much easier.

There are four available water flow levels (low, medium, high and ultra high), but in my experience, medium was efficient enough to get most jobs done.

As we’ve noted previously, a robot vacuum/mop hybrid is never going to completely replace your old mop and some elbow grease, particularly as their water reservoirs can’t be used with any cleaning products. That said, the T8+ is perfectly usable for small spills and maintenance between thorough mops.

One thing to note is that, while the OZMO T8+ can differentiate between hard floors and carpet, it’s not entirely foolproof. It will increase its suction power when it hits carpet, but since the mop doesn’t lift up on its own, there’s no avoiding the wet cloth dragging along carpeted surfaces, and you’ll have to manually remove it.

Robot vacuums will always take longer to clean the floors than us superior humans, so runtime is an important factor when shopping for one - especially if you live in a large home. Luckily, the T8+ is one of the longest-lasting robovacs on the market (though you’d hope it would be for the price). With a 5,200mAh battery, it’s capable of running for up to 180 minutes on a single charge, depending on suction power. This was pretty in line with my experience, as it took 45 minutes to clean my apartment on max+ suction and the T8+ still had 50% battery by the time it was done.

The only reason we’d hesitate to recommend the Deebot OZMO T8+ is simply the fact that it’s been replaced by the newer T9+, which offers a few extra features for the same price. If you can get the T8+ on sale, however, you absolutely should. It’s one of the most sophisticated robot vacuum cleaners we’ve tested, with the most efficient mop you’ll find on a robovac and a battery that’ll keep it going and going and going. It’s not perfect, and it’s still one of the most expensive models on the market (even on sale), but if you’re looking for one of the best, the T8+ is hard to beat.