The X1 Turbo is a great machine, packed with extras and enhancements, but the price tag will deflect some to cheaper models.

The Deebot X1 Turbo builds on the strong foundations of the existing Ecovacs range, with more power and a range of unexpected new features. But these upgrades are reflected in a higher price tag, and you wonder whether it might be a better value package without them. 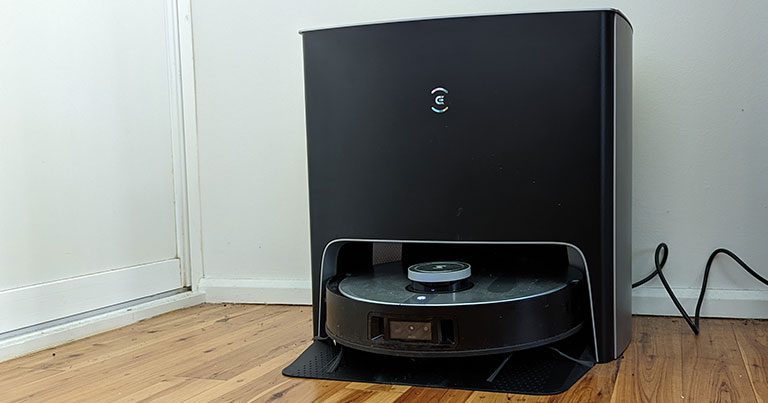 You only get one chance to make a first impression, and boy does the new Deebot X1 robot vacuums make the most of the opportunity. The vast majority of the machine and its housing are plastic, but the matte and brushed metal finishes combine well, helping the X1 look like a robot vac that belongs in a nice house. You know, one of those places where other people live.

Other than glamour, the X1 Turbo is easily recognisable as an Ecovac machine. It's a tad taller and heavier than last-generation Deebot robot vacuums, but the basic design is similar, with the exception of a noticeable camera cut-out at the front of the X1, but more on this later.

The X1 Turbo is the second-tier offering in the X1 range, with the X1 Omni taking the top slot, and the key difference is in the ‘garage’. Both models come with housings where the robots recharge and can self-clean. The one that comes with the Turbo model includes water tanks used to empty and refill the mopping water reservoir — one tank for clean water and another for collecting the icky brown stuff. The Omni’s garage also features an auto empty dustbin and a receptacle for collecting the dust and debris.

If I have one gripe about the design of the new X1 robots it is that Ecovacs has replaced the hinged door on the top of older machines, with a completely removable plastic plate. This is where the dustbin is, so it is something you need to access after each clean. The machine reverses into the garage, so the only way to get the dirt out is to drag the robot out of its house, take the top off, empty the bin and then push it back in. Funnily, the machine is always really keen to go back in, so I find myself racing to my house bin to empty the dustbin and get back before the X1 has put itself back to bed. 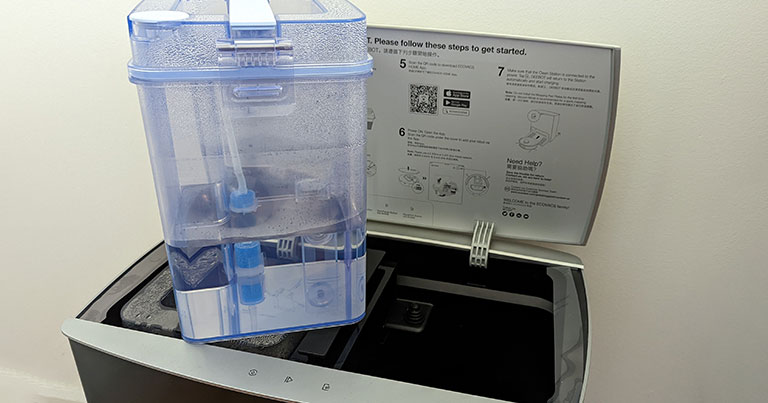 All seeing, all hearing

If Ecovacs were to have asked me what to include in new, premium quality machines before the X1s, I doubt I would have said video cameras and a monotone personal assistant.

It’s good news perhaps that Ecovacs didn’t ask me my opinion, because the new X1 vacs now include a colour video camera and a Siri-like voice assistant called ‘Yiko’.

To be fair, the camera on the X1 has a far more sophisticated task than spying on my cavoodle. Ecovacs describe this as an “an astrophotography-grade RGB camera” which pairs with AI to enhance mapping and obstacle avoidance. As a bonus, you can access the camera from within the Ecovacs app and watch the robot clean (not recommended on a full stomach) or you can park the robot somewhere in your house and monitor the goings on; a feature which is either useful or creepy, depending on the pilot.

Yiko is a tougher sell for me. Anyone with access to Siri or Google Assistant knows the limitations and frustrations of using them. Despite years of development, these systems are in the teenage years of their maturity; they’ve come a long way and have a long way to go. By comparison, Yiko is a toddler.

Per the Ecovacs app, there are 24 voice commands available, covering things like basic functions like start, pause, stop, return to base, and a number of current status requests like “how much power is left”, etc.

And just like the voice assistants on our phones from the last few years, I found myself shouting the wake command at Yiko over and over. The microphone has difficulty hearing ‘OK Yiko’ over the normal vacuum noises, eliminating half of the times it would be useful to give a voice command.

Of course, cameras and microphones are not the reason we’re testing a robot vacuum, and you’ll be pleased to know that the X1 is great at the basics. It drives as hard as it sucks, and the mapping and obstacle avoidance are noticeably improved.

One of my previous complaints with robot vacuums were around their hesitancy to explore areas with even a minimal rise or lip; especially thicker rugs with a raised edge. So I was thrilled to see that the X1 treats these like any old bump in the road. It wasn’t stalled by any of the surfaces in my house, and even went easily up the small, 5cm ramp into the bathroom. 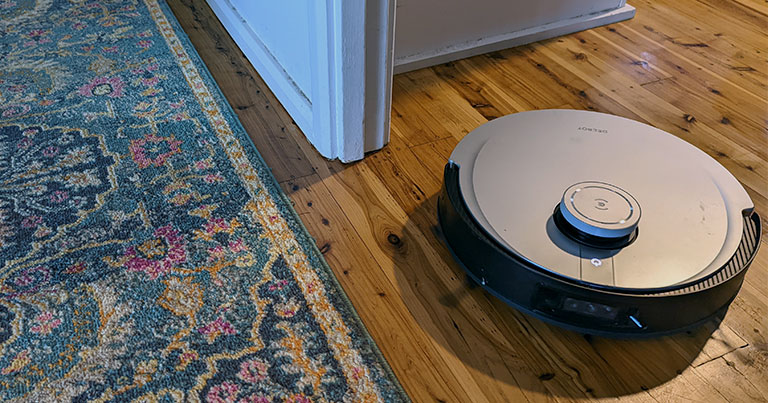 General sweeping and sucking work well, with the more powerful 5000Pa suction doing a great job, though it is also noisier than the last generation machines, as you’d expect. Combined with enhanced mapping, the X1 picks up most of the bits and pieces, and rooms are left looking much cleaner.

I’ve been sceptical of the mopping features in previous Deebots, where I’ve liken the mop to a snail dragging its butt across the floor. The X1 models are quite different, with two rotating mopping pads that spin quickly as it moves about. When it is finished, the robot returns to base where it self cleans the pads before the next time it ventures out.

This system does a good job of polishing surfaces, but I didn’t find it cleaned any stickier stains. Also, the manual explicitly states that you can’t add regular cleaning liquids to the reservoir, and Ecovacs doesn’t include any approved cleaners in the box (not even a small sample!) so you’re left mopping the floor with water, and I’d prefer a bit more than a wet floor at the end of the process.

As you can see, the Deebot X1 Turbo is a robot vacuum cleaner that has sharp looks, is packed with features and does a great job of vacuuming the floor. It may not then come as a great surprise that it is one of the most expensive vacs in the market. With an asking price of $2,099, there are few other competing models in this price range. The X1 is more like an Audi than a Toyota Corolla.

The question is, how many of the extras and enhancements are worth paying for? Even within the Ecovacs range, the X1 Turbo is about twice as expensive as most of the other Deebots. It certainly belongs in our list of the best robot vaccum cleaners.

The standout features are all performance focused. The extra suction makes for a better cleaner and the extra grunt means the X1 cleans in more places.

In general, the mapping and software perform better too. Ecovacs are better positioned to explain the advantages of astrophotography-grade cameras, but I can say that this is the first robot vacuum I’ve used where I haven’t had to rescue it from where it was trapped under a coffee table or a bed. The X1 covered the mapped areas and returned back to base every time it started a clean. This may sound like a low-bar, but it is surprisingly uncommon for a robot vacuum cleaner to flawlessly clean an area and get back to the charger without needing to be rescued from time to time.

The X1 Turbo is a great machine, and exceeded our expectations in a few instances, but the price tag will deflect some to cheaper models, and fair enough. Most of the extras and enhancements are great additions, but none of them are essential.