The lifelike technology behind Microsoft Flight Simulator makes it so much more than just a game.

Those who regularly play games online will know that the best results come from a low-latency,
reliably speedy internet connection. But fans of the niche simulator genre aren’t likely used to having to think about the speed or reliability of their internet connection to determine whether they can play a sim.

That’s about to change with the impending launch of the Microsoft Flight Simulator beta and its subsequent full release. 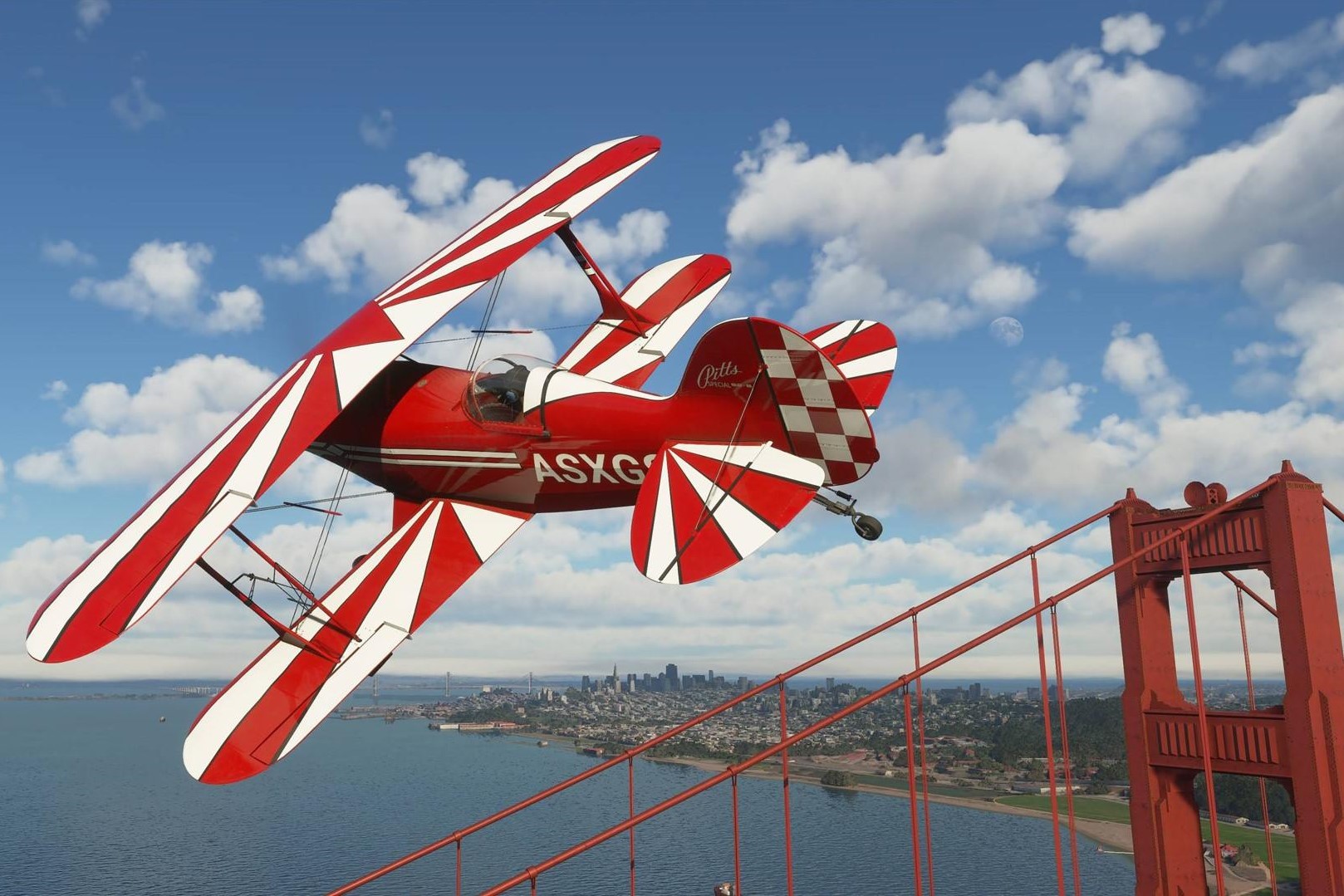 The term “always online” tends to be seen as a dirty phrase in gaming circles, particularly when it comes to games that are traditionally a solo, offline affair. While you don’t need to be online to play Microsoft Flight Simulator, doing so will mean missing out on an extra level of realism that comes from connectivity.

Microsoft Flight Simulator recommends you keep the online connectivity options on for, among other things, real-time satellite data streaming to convert skylines and terrain into digitised equivalents of recognisable real-world locales. According to the values in our recent pre-beta tests, it uses around 593MB of data per hour.

That’s likely a conservative figure given the bandwidth specs (more on those below). If your bandwidth can’t cut it, you can always disable some of the online components, including live weather, live real-world air traffic, multiplayer, and Bing Data World graphics.

But disabling those means you’re missing out on the more realistic facets of this flight sim. As you might expect from those online toggles, leaving them on lets you fly in digitally replicated real-world experiences in real-time. With fewer real-world flights for the game to recreate these days, replicated weather is the bigger concern, but this technology adds up to a true simulation that acts as an at-home replacement for forking out the cash to do the real thing.

Coincidentally, a number of the Microsoft Flight Simulator devs took flying lessons to help replicate the in-game feel, and these always-online toggles help to add to that overall sense of authenticity. 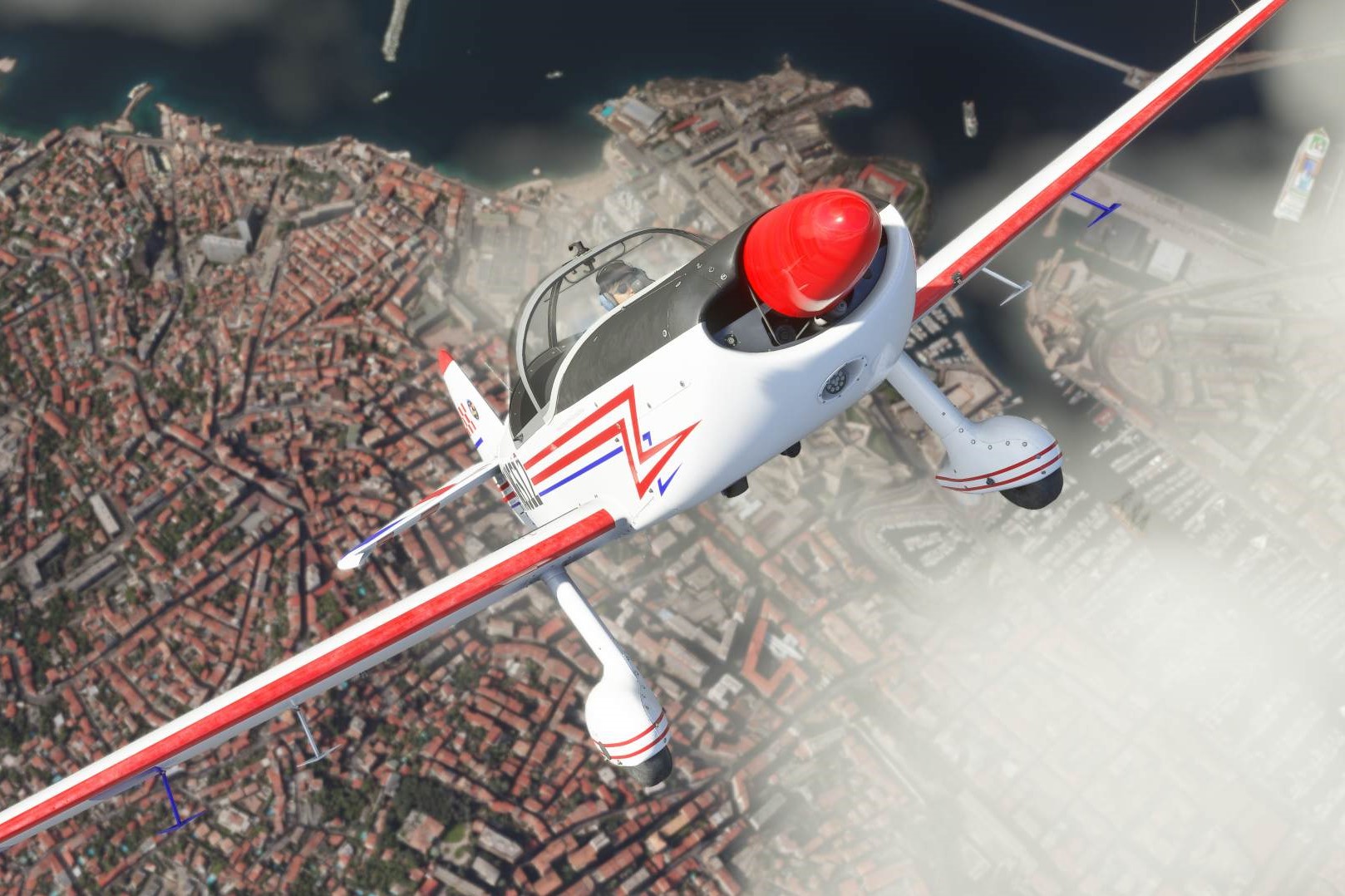 As you might imagine, rendering a 1:1 scale world involves a lot of data: two petabytes (or two million gigabytes), in fact. The developers use a combination of Bing Maps and Microsoft’s cloud-computing platform Azure help to manage that data and, critically, keep it manageable on the player’s side of things.

Bing Maps means Microsoft can rely on its everyday mapping data, while Azure handles a sky’s-the-limit quantity of data so it can be streamed to players, rather than being stored on their hard drives.

Keep it secret, keep it safe

If you try to find a classified area on a satellite map service, it’s usually pixelated. In games, pixelation is a negative, which is why Microsoft Flight Simulator replaces these sensitive areas with natural topography like forests instead to maintain the immersion. 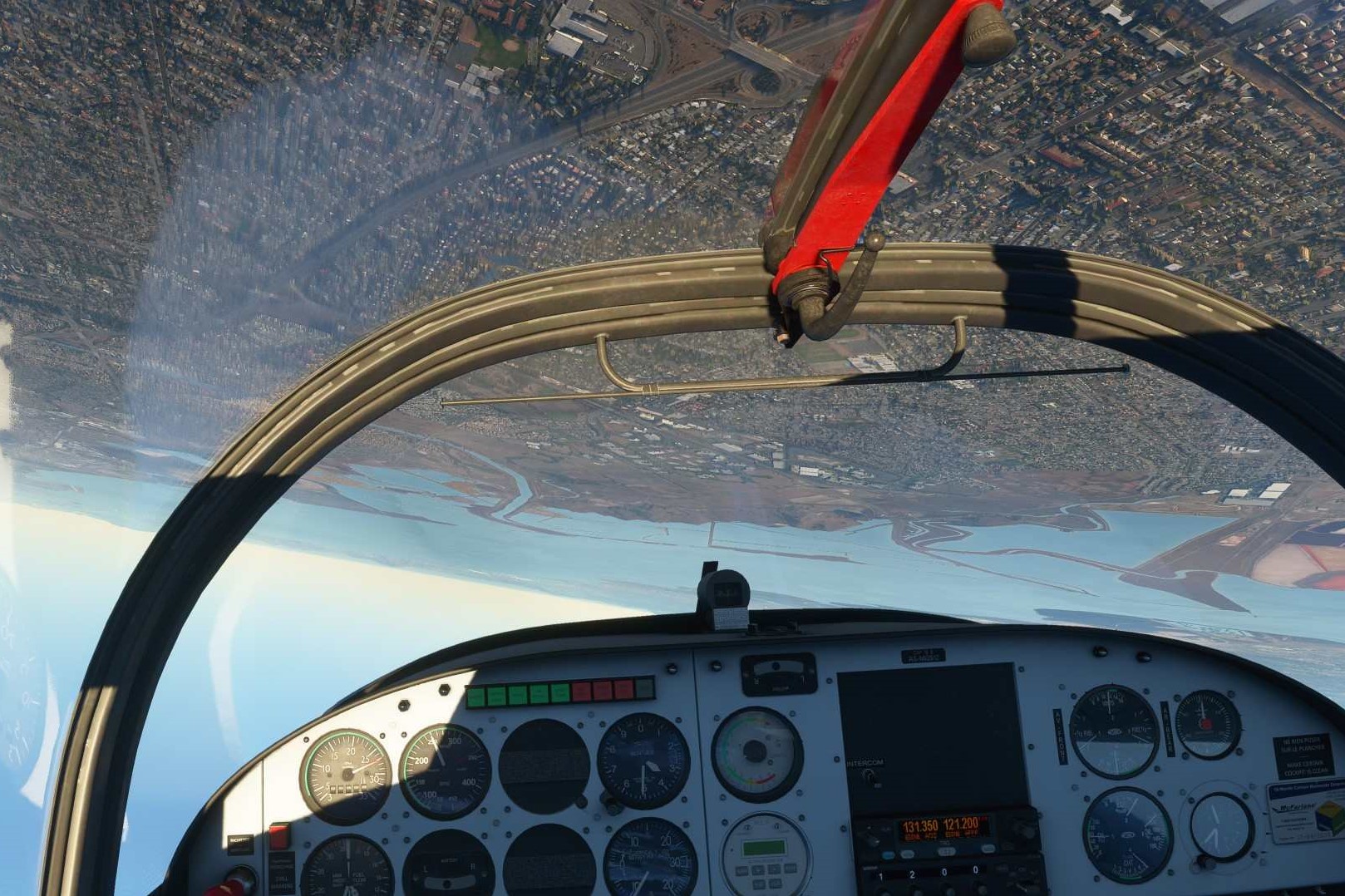 Microsoft has provided comprehensive specs for the kind of PCs that will be able to fly Microsoft Flight Simulator on minimum settings, recommended settings, and top-end ideal spec for AMD graphics cards and CPUs, as well as Intel CPUs and Nvidia graphics cards.

Outside of the mammoth installation size (time to start making space), the minimum and recommended specs are quite reasonable. It’s clear that having a decent CPU and plenty of memory will be more important than having a super-recent graphics card in order to play Microsoft Flight Simulator smoothly on PC.

What NBN speed do I need to play Microsoft Flight Simulator?

Any NBN connection, even NBN 12, should be able to comfortably handle the Microsoft Flight Simulator’s minimum-spec 5Mbps bandwidth requirements.

An NBN 25 connection may be okay to meet the recommended bandwidth spec, but that’s assuming you’re with a provider that offers great typical evening download speeds, and there’s no-one else on your home network chewing up too many megabits of bandwidth.

For those with high-end PCs that meet the ideal spec for Microsoft Flight Simulator, the hurdle to meet the ideal bandwidth will be that you’ll need an NBN 100 connection (at least). That’s because, despite the name, NBN 50 plans won’t offer 50Mbps download bandwidth, even if you’re the only one using this connection, so you’ll need an NBN 100 plan to ensure that bandwidth box is ticked.

If you have an internet outage or want to preserve monthly data (or household bandwidth), Microsoft Flight Simulator is very playable in offline mode. Not every part of the world has readily available satellite data even if you’re online, so cities like Paris are procedurally generated with machine learning.

This means that cityscapes look great from a bird’s-eye view, and still look believable when you dive down for a closer look. You should still expect to see landmarks like the Eiffel Tower or Sydney Opera House, and while buildings might not look as familiar in offline mode, the layout of the land, height of structures, and clusters of suburbs are accurately depicted.

Getting away from the cities, grass, bushes, and trees are procedurally generated, while photogrammetry techniques – used to realistically render real-world objects in games – are employed to keep things looking crisp, even when there’s a wealth of visual data below you and on the horizons all around your plane. 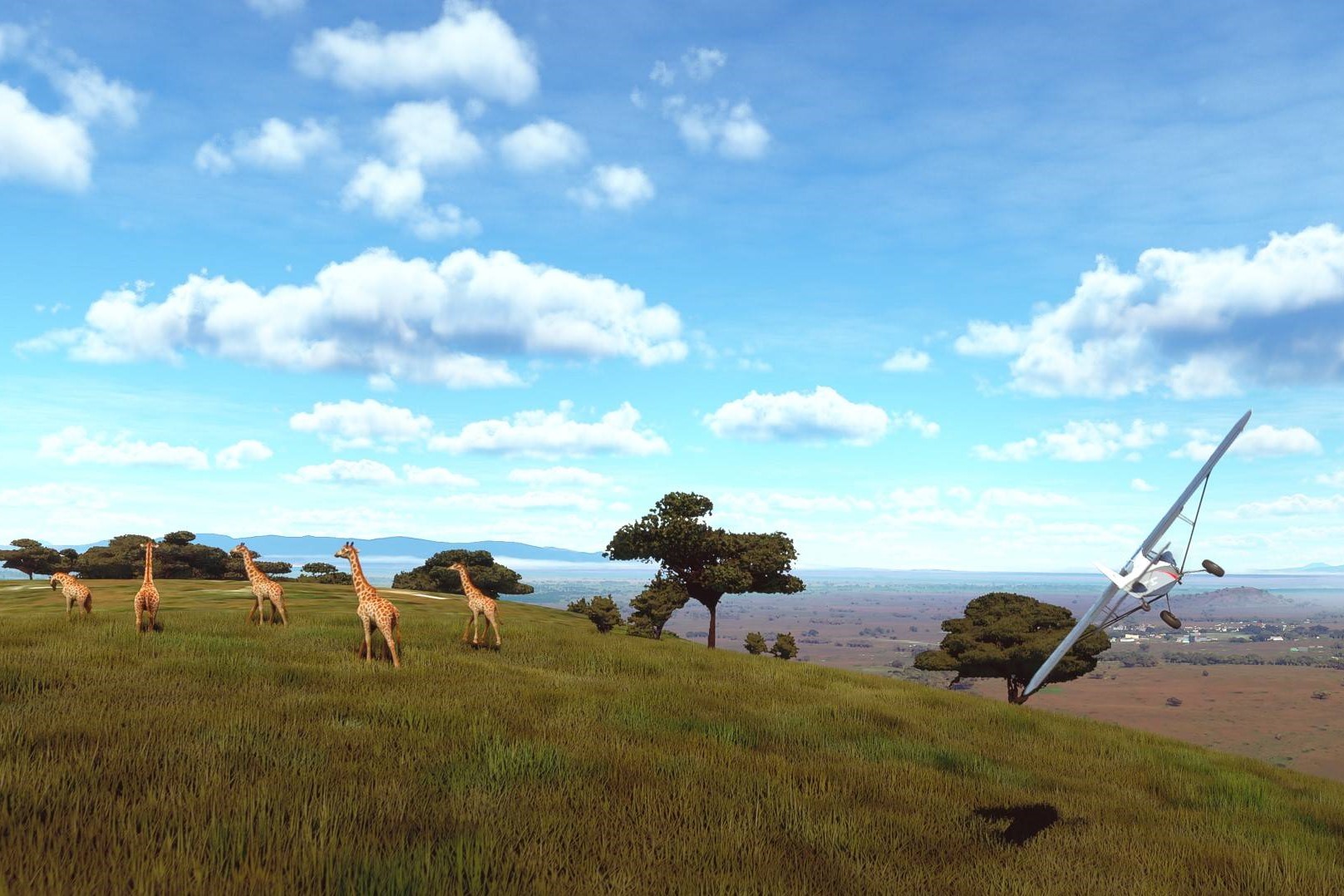 Microsoft Flight Simulator is built to support a range of control options on PC. You can use a
keyboard and mouse, both of which will be handy the more you dig deeper into the realistic settings with assists disabled. If you want something more straightforward, flick on some or all of the assists and play with a gamepad controller.

That said, for the ultimate immersion, you’ll likely want to dust off or invest in a joystick and other ‘hands on throttle and stick’ (HOTAS) gear to match control input reality with the on-screen fidelity. You can start off by investing in something like a Honeycomb Alpha Flight Controls or the Logitech Flight Yoke System, then add to it with something like Thrustmaster Pedals. Microsoft provided these products to use with the preview build of Microsoft Flight Simulator, and they add to the overall pilot fantasy.

If you’re willing to invest in all of that, you’ll likely be tempted to invest in a VR headset – VR support for Microsoft Flight Simulator is coming in a post-launch patch – to complete the full-fledged flying illusion.

Check out the best games on Xbox One

Or see what Xbox Game Pass has to offer