The headset formerly known as Oculus.

The financial realities of virtual reality (VR) are such that, one way or another, it’s a steep investment to get aboard. Whether you’re using a VR headset for a smartphone, folding a cardboard Labo model for your Nintendo Switch, connecting a PS VR unit to a PlayStation 4 or PlayStation 5, or spending a whole lot more to pair with a desktop or gaming laptop, the peripheral cost comes after the initial hardware investment.

This is what the Meta Quest 2 seeks to change. Out of the box, you can pop it on your head and, after creating or signing into an Meta account (read: Facebook account), you can get playing or watching. Alternatively, the Meta Quest 2 can be connected to a VR-ready PC to offer a viable way to play games, even in wireless mode without having to purchase the not-that-cheap Meta Link Cable.

While some may consider it a con, the two to three hours of battery life (depending on what you’re doing) works as a natural barrier to managing VR time. Still, the included charging table is so short you can’t really charge and play, plus charging takes about as long as the battery life. It also would have been nice to have removable in-ear speakers or fold-down over-ear speakers to avoid annoying people when playing without external headphones.

Ultimately, these minor gripes aren’t enough to hold back the Meta Quest 2 from being a great value VR headset that’s well worth buying. 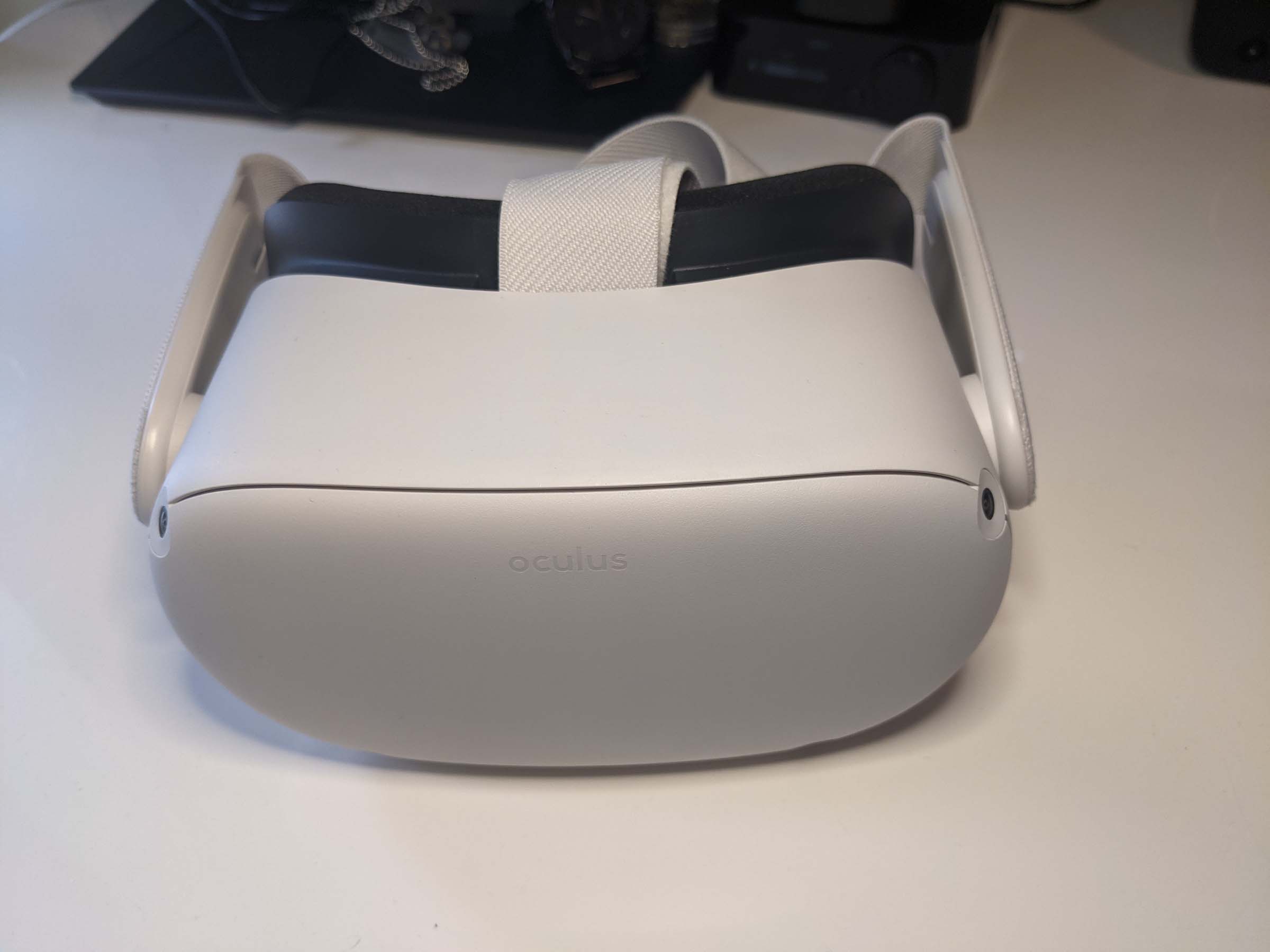 How much does the Meta Quest 2 cost in Australia?

The Meta Quest 2 is sold in two versions: the $479 base model with 64GB of internal storage or the $639 version with 256GB of internal storage. Note there’s no way to upgrade the storage, so you may have to get used to uninstalling and reinstalling games/apps if you run out of space, particularly on the base model. You won’t find the Meta Quest 2 at retailers like JB Hi-Fi, but you can order one online.

Note that at the time of writing this review, the 64GB base model was hard to find, which is why the pricing table below is for the 256GB upgrade.

What’s in the Meta Quest 2 box?

The Meta Quest 2 is incredibly well packaged and, once you crack the lid, there’s an easy quick-start guide printed on the inside of the lid. Inside you’ll find the Meta Quest 2 headset, two controllers, two AA batteries, a wall charger and a short USB-C charging cable. 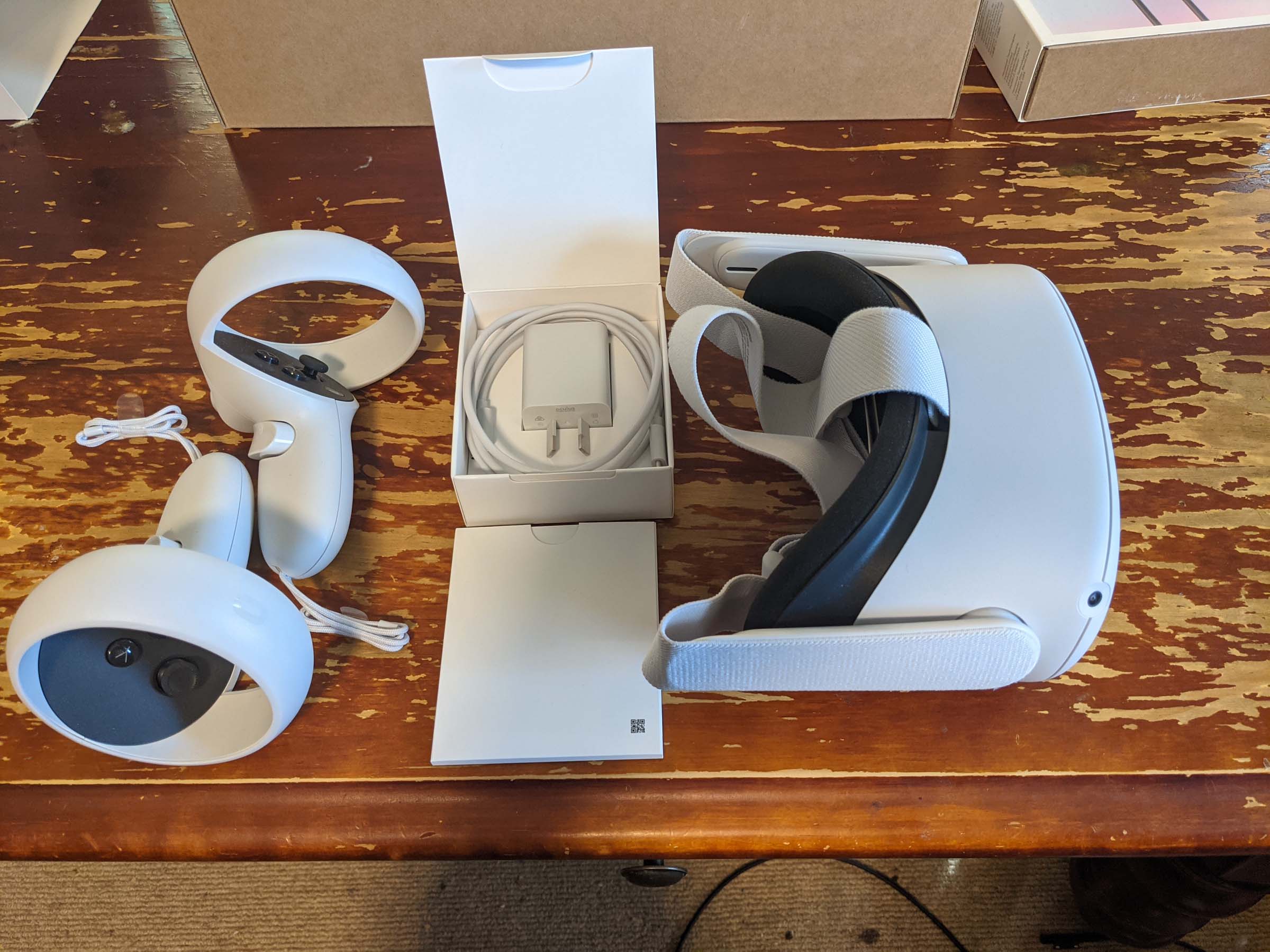 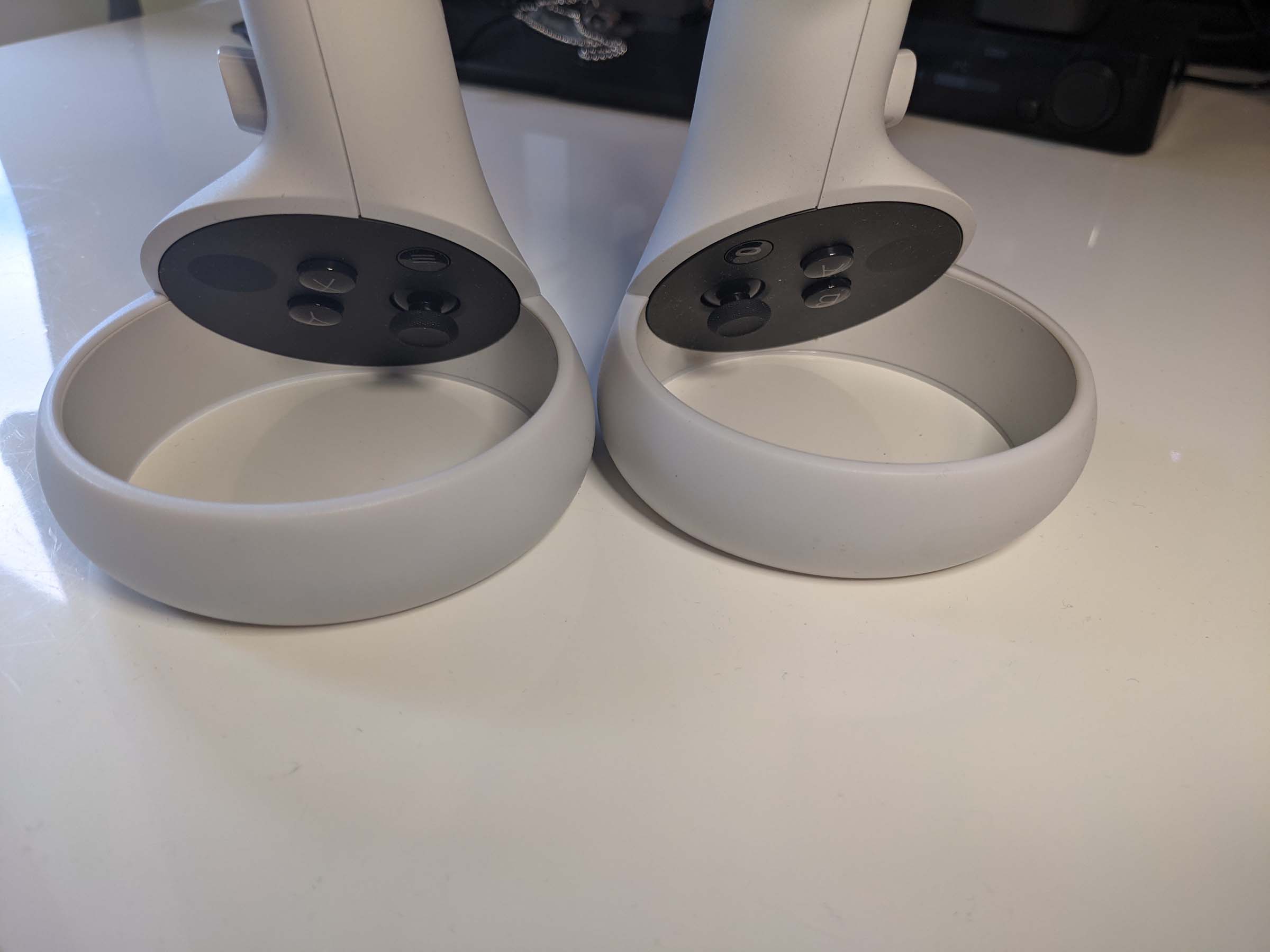 You can buy a Quest 2 Elite Strap for $79RRP, which includes the typical VR headset fit-wheel for adjusting to different noggin sizes. But you don’t need it. The default head strap is incredibly easy to adjust and comfortable to wear, even during hours-long sessions. I set it at a tighter fit for my head, which meant it was more easily transferrable to other in-home heads, and it didn’t have those awkward moments where it felt like it was going to fall off my head when I whipped around too much.

With my VR experiences in the past, I’m used to cheating and using a monitor or TV to do the configurations before putting the headset on once everything is ready to go. Because the Meta Quest 2 is designed as a standalone headset, you can’t do this unencumbered shortcut, not even via the Oculus app. That’s not a massive deal, but I did miss this shortcut option, particularly when liaising with the PC. As a cost-effective VR headset, the Meta Quest 2 doesn’t have fancy features like a fold-up visor, but I quickly got used to changing everything while wearing the headset.

That said, I never quite acclimatised to the user interface. It’s incredibly straightforward for most of the basics, except it’s finnicky when it comes to finding your existing Meta purchases or sometimes even searching for them. For me, the fastest way to find my owned Meta games was to manually search for them in store, but searching for “Star Wars” didn’t give me the expected results, so I had to search for other parts of the game name.

It’s a weird quirk that feels odd next to the otherwise user-friendly VR system. If you’ve used a VR system before, the controllers are incredibly intuitive with no major changes or quirks on that front. The Meta Quest 2 can be used sitting down or standing up, wherein you map out your play area, and the real-world view of what’s in front of you while you configure things is greatly appreciated. My only problem was that it has a kids-gloves approach to warning you when the controllers are near a solid surface which, for me, was a regular intrusion when I was playing at my desk. Still, I’d rather the warning over smashing the controllers into something. 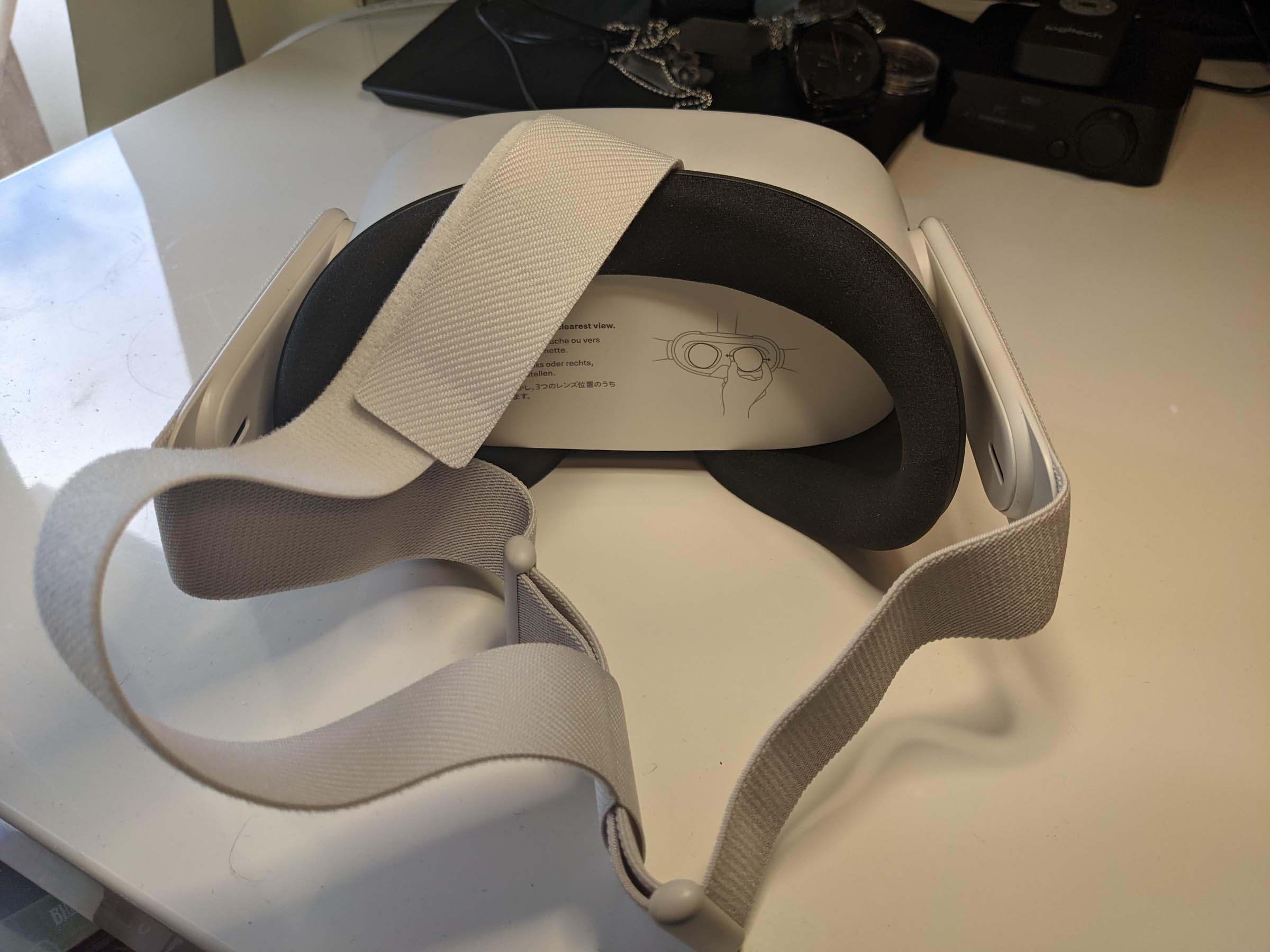 When you read about standalone VR headsets, you expect there to be compromises. For the Meta Quest 2, I was honestly surprised that there wasn’t a harder compromise on the resolution (1832x1920 per eye), even if the base 72Hz refresh rate felt like a bare minimum. I play most of my VR games while sitting down, but I didn’t have any issues with the 72Hz refresh rate while standing; your mileage may vary depending on how sensitive you are to motion sickness.

It’s worth noting that games that support 90Hz refresh rates play at that higher refresh rate by default and, if you don’t mind tinkering with experimental settings, there’s even the option to up this to 120Hz. When you’re playing in standalone mode, these higher refresh rates assumedly come at the cost of fidelity.

I was consistently impressed by how responsive the Meta Quest 2 felt, even for 72Hz experiences. Whether I was working through the default demo software, playing through Vader Immortal, or settling in to YouTube videos or a Twitch stream, there was no noticeable latency issues when using the controllers. For the videos in particular, I enjoyed being able to see a virtual rendition of the controllers so I knew where to find them, even if I did have to put them somewhere that wasn’t in the way of the virtual big screen.

Fortunately, the focus felt right out of the box for me, but I also appreciate that there are two additional lens-spacing settings that are designed to accommodate around 95% of adults (according to Meta). You’ll get two to three hours out of the Meta Quest 2 before it needs to be charged—around two for games and closer to three for non-gaming use—but be warned that charging takes around 2.5 hours if you’ve run the headset dry. Preparation is definitely key if you want to get the most out of the battery life.

While this can be seen as an inbuilt way to manage VR screen time (it is for me), it would have been great had the Meta Quest 2 come with a charging cable that made play-and-charge more practical. The way around this is to spend $129RRP on the Oculus Link Cable, which allows a USB-C to USB-C connection. That’s quite a price to play for a cable, but it does open up some fantastic versatility for the Meta Quest 2 if you have a powerful enough PC, like the Razer Blade 15.

For those with a VR-ready PC, perhaps one with an Nvidia GeForce RTX 3070 Ti inside, the Meta Link Cable is a straightforward way to convert the Meta Quest 2 into a PC-friendly VR headset. In my tests, it maintained battery life while connected to my PC but didn’t charge. That said, charging did commence when I left the Meta Quest 2 plugged in and stopped playing.

What’s infinitely more impressive is one of the Meta Quest 2’s experimental features. You’ll need to upgrade to the latest software, but once that’s done, head into Experimental Features then toggle on Air Link. From there, fire up the Oculus app on your PC, activate Air Link then you’re ready to go.

As an experimental feature there are some quirks, most notably with SteamVR hanging when I tried to launch it via the Meta Quest 2. That said, manually launching SteamVR on my PC or starting up a game directly on my computer created a viable wireless VR experience, which felt the same as playing wirelessly in standalone mode. For context, you can make the Vive Pro or Cosmos wireless via an optional adapter purchase, but at $599RRP, that’s more than the cost of the Meta Quest 2 base model and almost as much as the 256GB version. 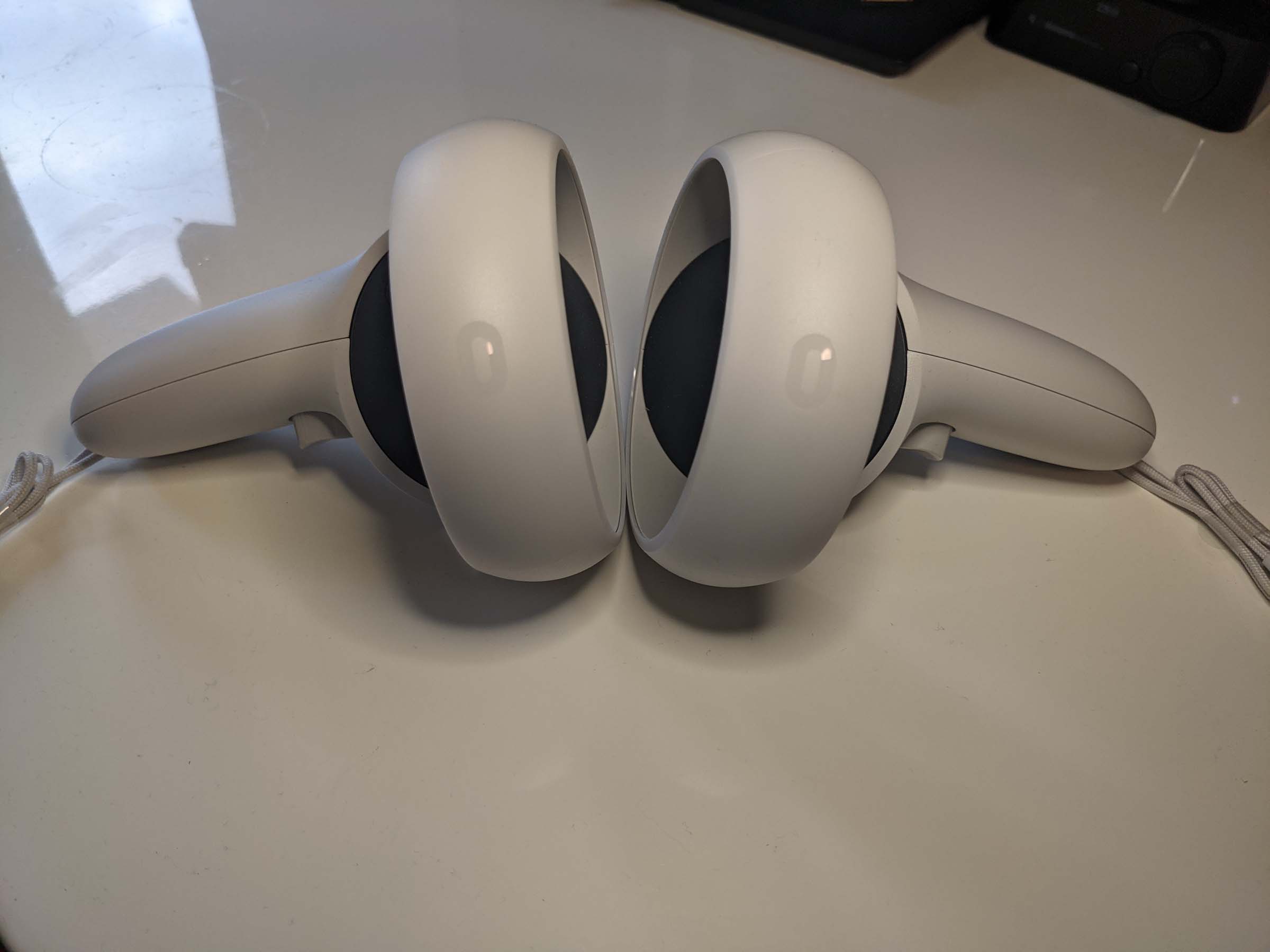 Is the Meta Quest 2 worth it?

If you’re curious about VR but don’t want to (comparatively) spend an arm and a leg, the Meta Quest 2 is absolutely worth considering. When available, the $479 base model is a viable wireless PC VR headset if you’re not worried about the 64GB internal storage. For everyone else, the Meta Quest 2 presents a handsfree and user-friendly VR experience that’s well worth strapping to your noggin.