Hinging on a few key improvements

HTC’s consumer VR experience has always been a premium option for VR enthusiasts but is the next evolution of the VIVE worth the extra dime?

Now after more than three years on the market as the most affordable ticket to HTC’s primo tech, the standard Consumer Edition model is being phased out by a new $1,299 base model that HTC hopes will open up a whole new world of versatility and upgrades for its loyal customer base: the HTC Vive Cosmos.

We got the chance to spend a few hours with HTC’s modular Cosmos with a small handful of games and experiences. Here’s what we think of the new base model so far.

The VIVE Cosmos sounds so promising on paper: invest in the modular consumer VR headset and slowly upgrade it over time, rather than forking out for a whole new headset. However, there’s really not enough customisation at launch to get excited over and what is available is pretty pricey.

That’s on top of the more expensive bottom-tier entry free for HTC VIVE now that the Cosmos ($1,299) is phasing out the Consumer Edition ($939). The headset itself offers a lovely suite of quality of life improvements but there just isn’t a single mindblowing feature that would swing me to upgrade if I were an existing VIVE user.

Read on for a more detailed hands-on with the HTC VIVE Cosmos. 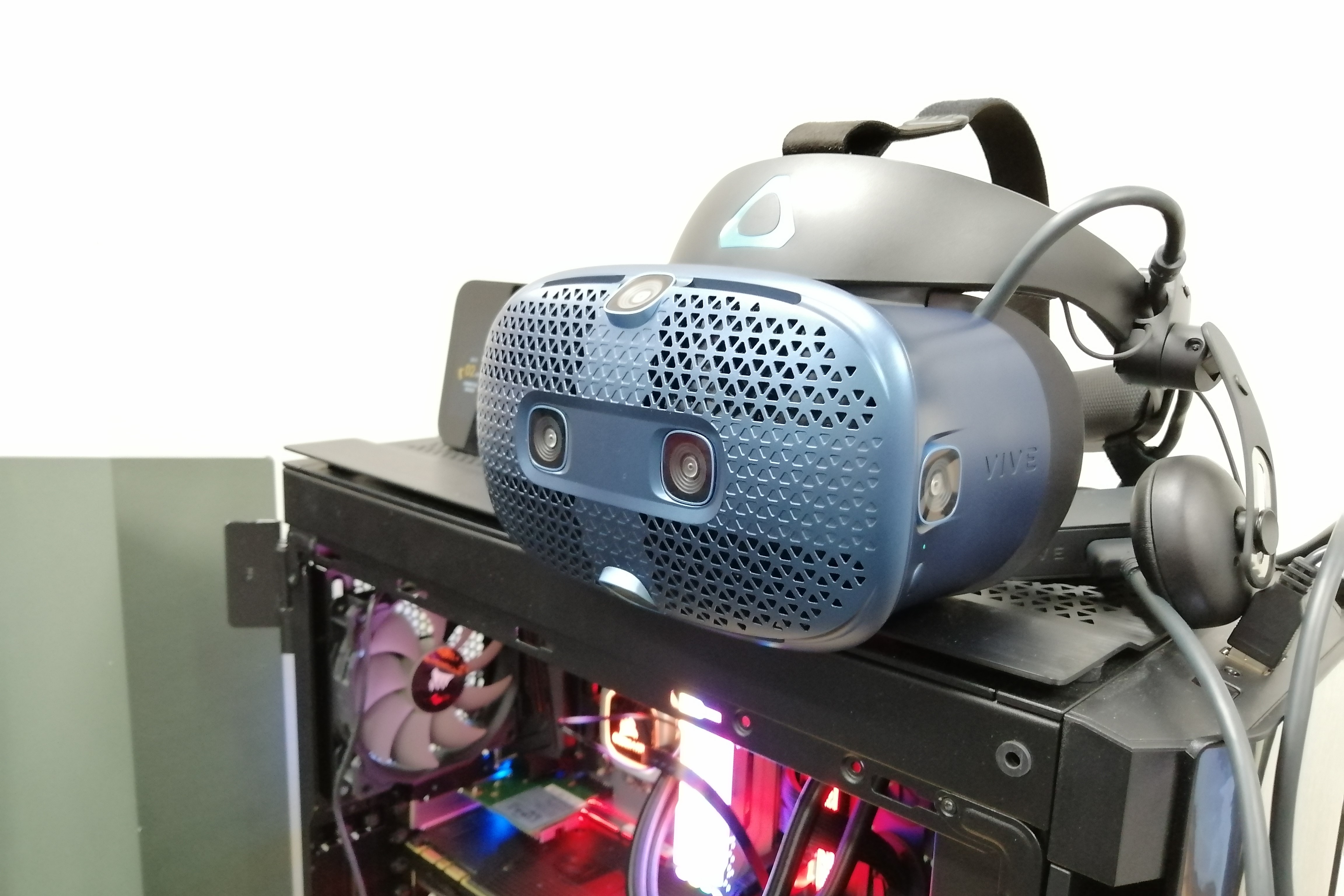 First up, there are a handful of design improvements that have been made with the Cosmos that are a much-welcome step forward for comfort, and product longevity. Here’s what we’ll discuss:

Right, so the hinge on the HTC VIVE Cosmos is hands-down the most obvious design improvement. Instead of removing the headset completely when you want to have a drink of water or find your bearings, you can just flip the business end of the headset up and then back down again when you’re ready to dive back in. It’s one of those improvements that seem so obvious once it’s there.

With that said, I did get a small glimpse at one possible reason this approach hasn’t worked before. The headset flipped up and down with no issue at all, which is great for someone who panics every time someone goes to adjust the band on the PSVR headset. But when I flipped the headset back down and continued to play, I noticed I couldn’t quite eliminate the light bleed around the edges, despite flipping it up and back down again multiple times. Now, I’ve always had trouble getting these headsets to fit snug over my nose and we were playing under some intense fluorescent office lighting so this isn’t as much of a red flag as it is a cocktail of personal circumstances so the light bleeding might not be an issue for those playing at home.

Apart from that slight awkwardness, the hinge itself was a godsend. Particularly in a product demo where you’re surrounded by other people and pricey gear.

Ho boy, that’s a lot of words about a hinge. Moving on.

Next up is the new VIVE controllers. I’ve always had a bit of a soft spot for a hardware manufacturer that tries to replace joysticks with trackpads but in practice, I’ve never had enough time with any of these products to truly acclimatise to the change. So I’m overjoyed with HTC’s return to traditional thumbsticks with the new controllers.

That’s not the only change. The tracking halo at the head of the controller has been flipped, with the tracking ring facing forward (instead of up). The new thumbsticks and a few additional face buttons are placed inside the tracking halo. Besides that, you’ve still got the triggers underneath so you still feel super cool when you’re running around your empty spare bedroom shooting robots and the like.

Overall, the new controllers just feel a good deal lighter and more compact than the original VIVE controls. The comparison picture below barely does it justice but the old controller feels unwieldy after testing out the Cosmos controls. 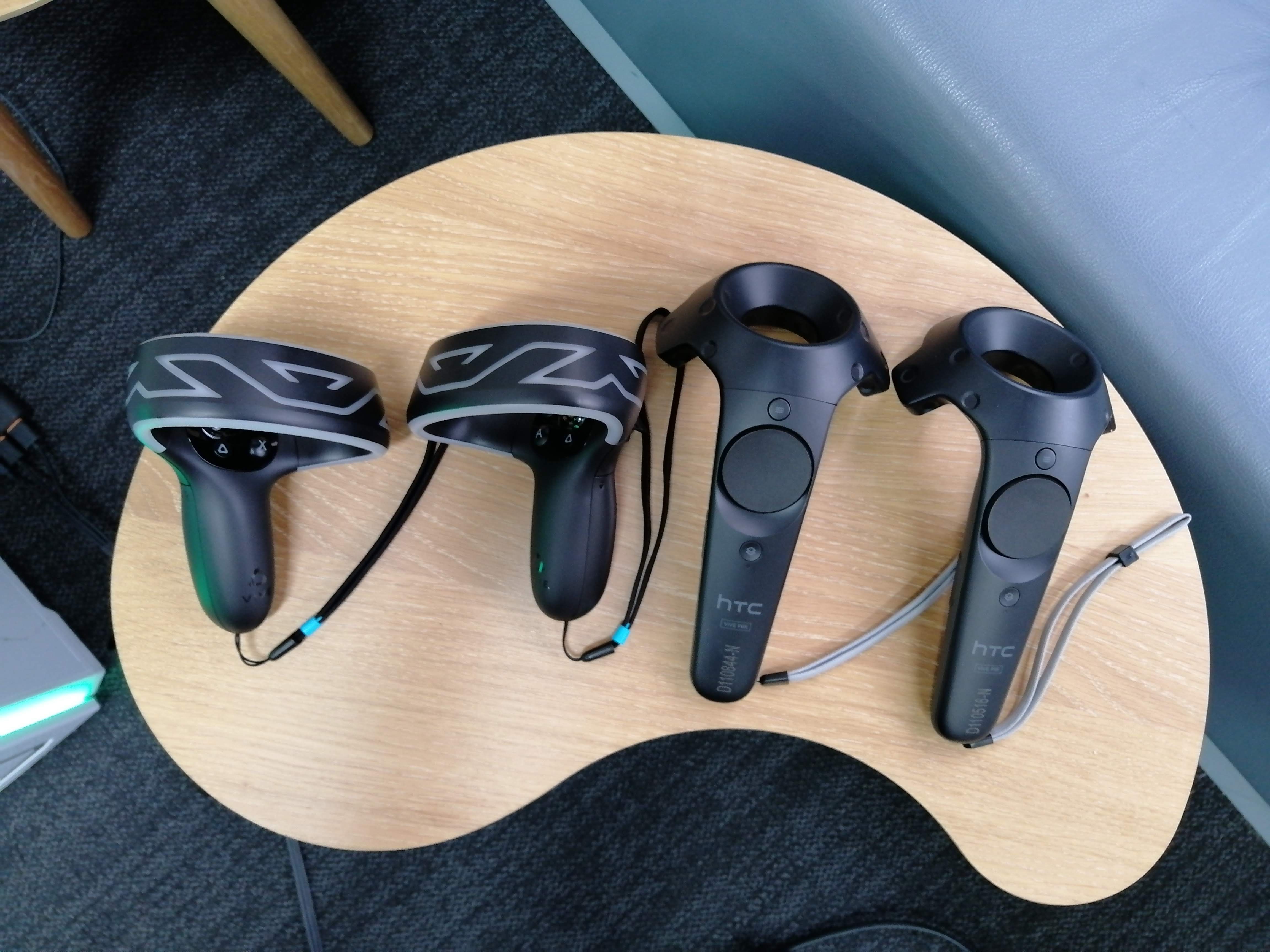 This is the main selling point of the HTC VIVE Cosmos. HTC recognises that even its bottom-tier consumer enterprise products are a luxury only a few enthusiasts can afford. So the idea is to make the new base model “future proof” by allowing for iterative upgrades to the headset.

The biggest surprise for me was how sturdy the headset felt, despite its detachable components. Though, only time will tell if that sturdiness holds after a couple of years of usage.

The biggest issue is that, while a customisable headset is very promising, the HTC VIVE Cosmos hasn’t launched with a whole lot to show for it. An External Tracking Mod is coming soon that will let you combine the headset’s inside-out six-camera tracking with traditional lighthouse tracking (those little black tracking boxes) for more accurate tracking overall but that’s not released yet. There’s also support for last year’s VIVE Wireless Adapter mod that’ll let you go wireless but it will set you back an additional $479. Which exemplifies our biggest issue with the VIVE Cosmos: these expensive mods will ultimately increase the price of your HTC VIVE Cosmos, which is already a few hundred dollars more than the standard Consumer Edition (which is still selling at Harvey Norman for $939).

With just a few mods, you could probably cover the cost of a Consumer Edition VIVE and then some. Again, these are optional upgrades and time will tell if they’re worth it or not but I can’t help feeling that, at the very least, HTC could have included the Wireless Adapter with the Cosmos to sweeten the deal a little bit.

The first thing I noticed when I slid the VIVE Cosmos of the noggin was the reduced screendoor effect. That’s the checkerboard effect you get with most VR headsets and its simply a product of having your eyes mere millimetres from the display. Same deal if you sit way too close to the telly. This has been drastically reduced with the Cosmos when compared to the Consumer Edition VIVE and is most definitely a step-up from the PlayStation VR unit I own.

This more natural-looking display is an instant buff to the immersion factor and its made possible thanks to the Cosmos’ new 2800 x 1700 resolution, plus updated LCD and RGB panels.

The upgrade to the headset’s visual fidelity offers a strong case to upgrade for VR fans but again, it didn’t feel like anything revolutionary and I can’t say for sure if that was down to the ultra-bright environment we were playing in, the quality of the content we previewed (a couple of VIVEPORT titles) or whether the light bleed is a proper issue.

We’d have to spend some more time with the Cosmos to know for sure.

Where can I get the HTC VIVE Cosmos in Australia?

The HTC VIVE Cosmos is available in Australia online via VIVE's store, Scorptec and Mwave.

Otherwise, you can check it out at EB Games if you'd prefer to pick it up from a physical location.

The Cosmos isn't available via HTC's Amazon Australia yet but you can pick up the standard CE Edition (check price) and the HTC Vive Pro (check price).