Even the Razer Blade 15 base model has enough power to keep you in the game. 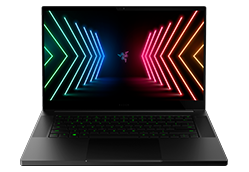 You can speed up your current gaming laptop or you can just buy a gaming laptop with faster hardware like the Razer Blade 15 (2021). It’s one of the best gaming laptops we’ve reviewed in recent times, even if it comes with a high asking price and a battery that relegates it to a PC that should be plugged in at all times.

Still, even the Razer Blade 15 base model that we were sent to review has enough power to keep you in the game at frame rates that surpass, meet or can be tweaked to come close to the 144Hz screen refresh rate. Nab it at the severely discounted prices that were going at the time of review and you can get a steal on a gaming laptop that’s great for gorgeous offline gaming and powerful enough to give you a competitive edge online. 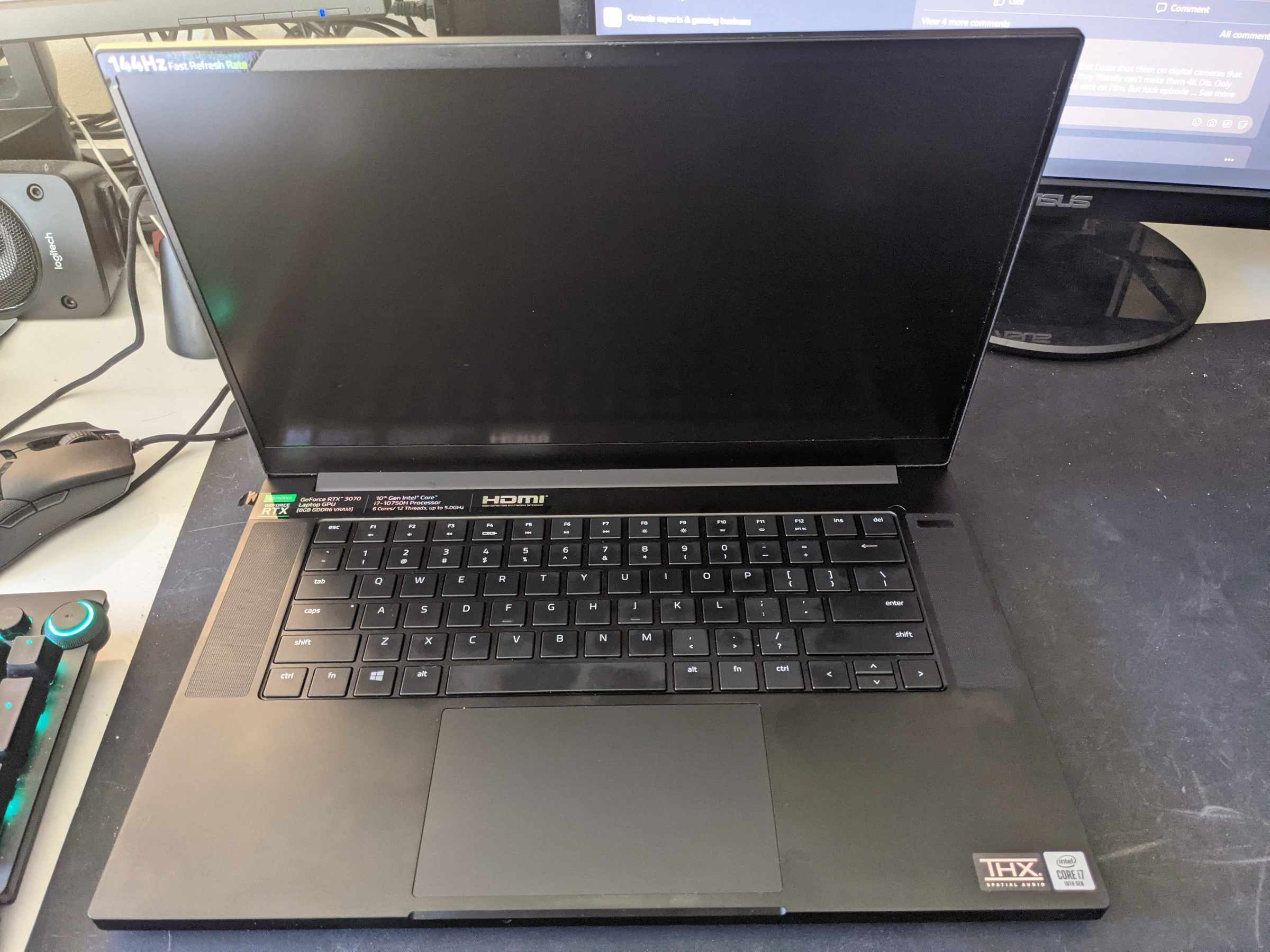 How much does the Razer Blade 15 (2021) gaming laptop cost in Australia?

Data effective 17/6/2021. Offers and availability may vary by location and are subject to change.

Razer may be renowned for making mighty peripherals like the Wolverine V2, Viper Ultimate and Huntsman Elite, but the Razer Blade 15 comes with the bare essentials. You’ll get the Razer Blade 15 gaming laptop and a detachable power cable, which connects to a power brick (that doesn’t have a detachable cable) for connecting to the laptop. Thankfully, they’re long enough to give you power outlet options.

The core black aesthetic is on brand for Razer products, even if it translates to a fingerprint magnet for the Razer Blade 15. Still, while the metal materials add to the overall heft, it does result in something that feels more robust. Unlike the Asus TUF Dash F15 (FX516), the Razer Blade 15 has exhaust vents on the bottom instead of the sides.

On one hand, this keeps your mouse hand and cables free from hot exhaust air, but it also means you really shouldn’t use the Razer Blade 15 on your lap. Placed on a solid surface, though, there’s plenty of space between the bottom-facing vents and fans to exhaust air and keep things cool. 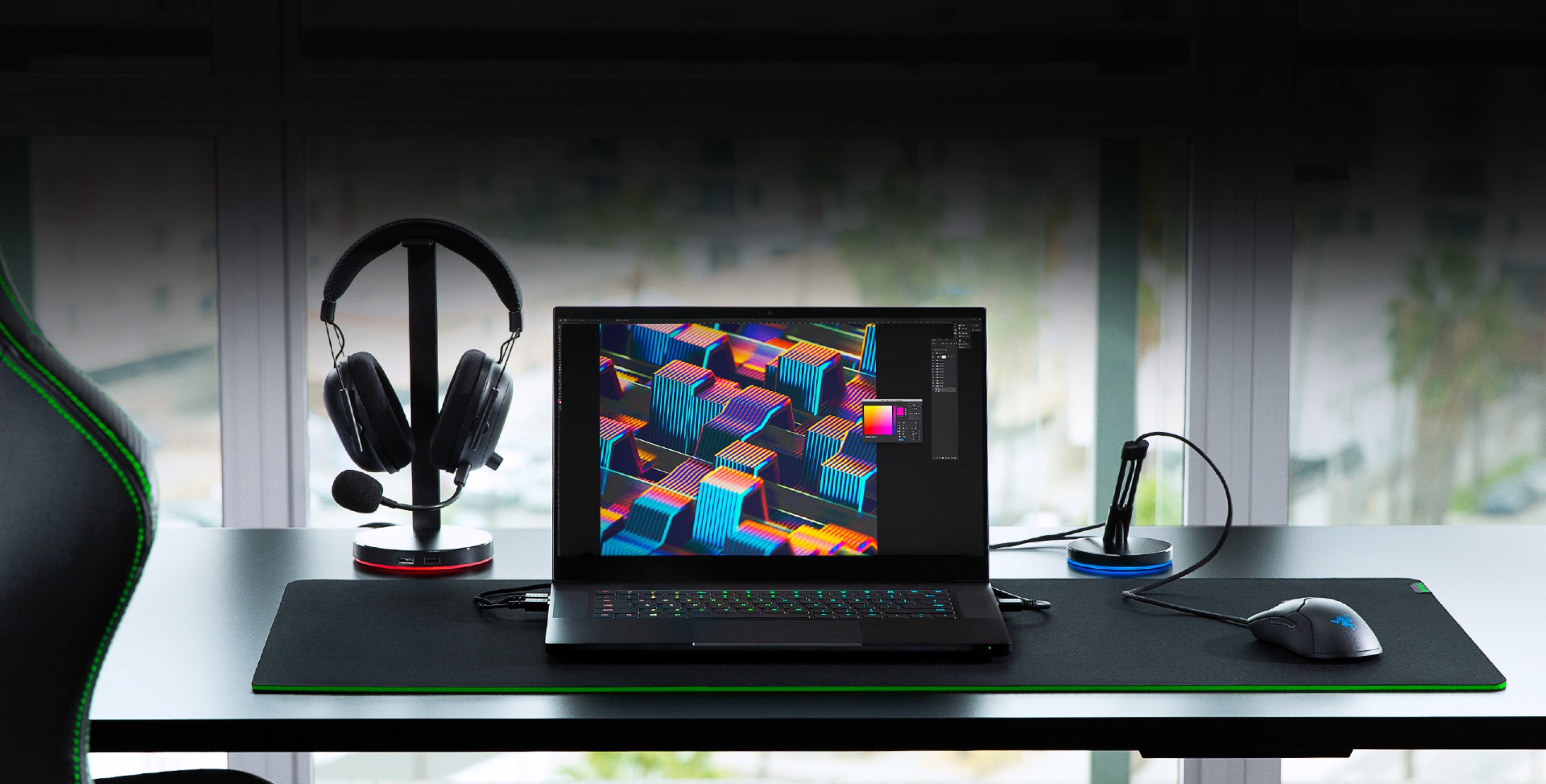 If you don’t mind using a nail, you can flip the lid with one hand, otherwise it’s a two-handed affair. Beneath the lid is an RGB keyboard, which feels more like an everyday laptop keyboard than something that offers a competitive edge via short actuation. Still, the keyboard gets the job done for everyday use and gaming, while the generously sized and responsive touchpad works well.

The keyboard is flanked by two big-by-laptop-standards speakers, and at the top of the right one is where you’ll find the power button. On the sides of the laptop you’ll find the right amount of ports: most importantly, three regular USB-A (two on the right, one on the left) and a USB-C port on either side, which means plenty of options for peripherals.

My review model had a 144Hz 15.6-inch 1080p display, which is the right size to make it feel like you’re not squinting while playing and the right refresh rate for the hardware inside the base model.

The Razer Blade 15 is available in two models: the base version and the advanced model, the latter of which is more expensive but has more powerful innards. Note that both versions can be tweaked in terms of CPU, GPU and display, while the advanced model has a choice of either 16GB or 32GB memory. The base model specs below are indicative of the review unit provided by Razer. 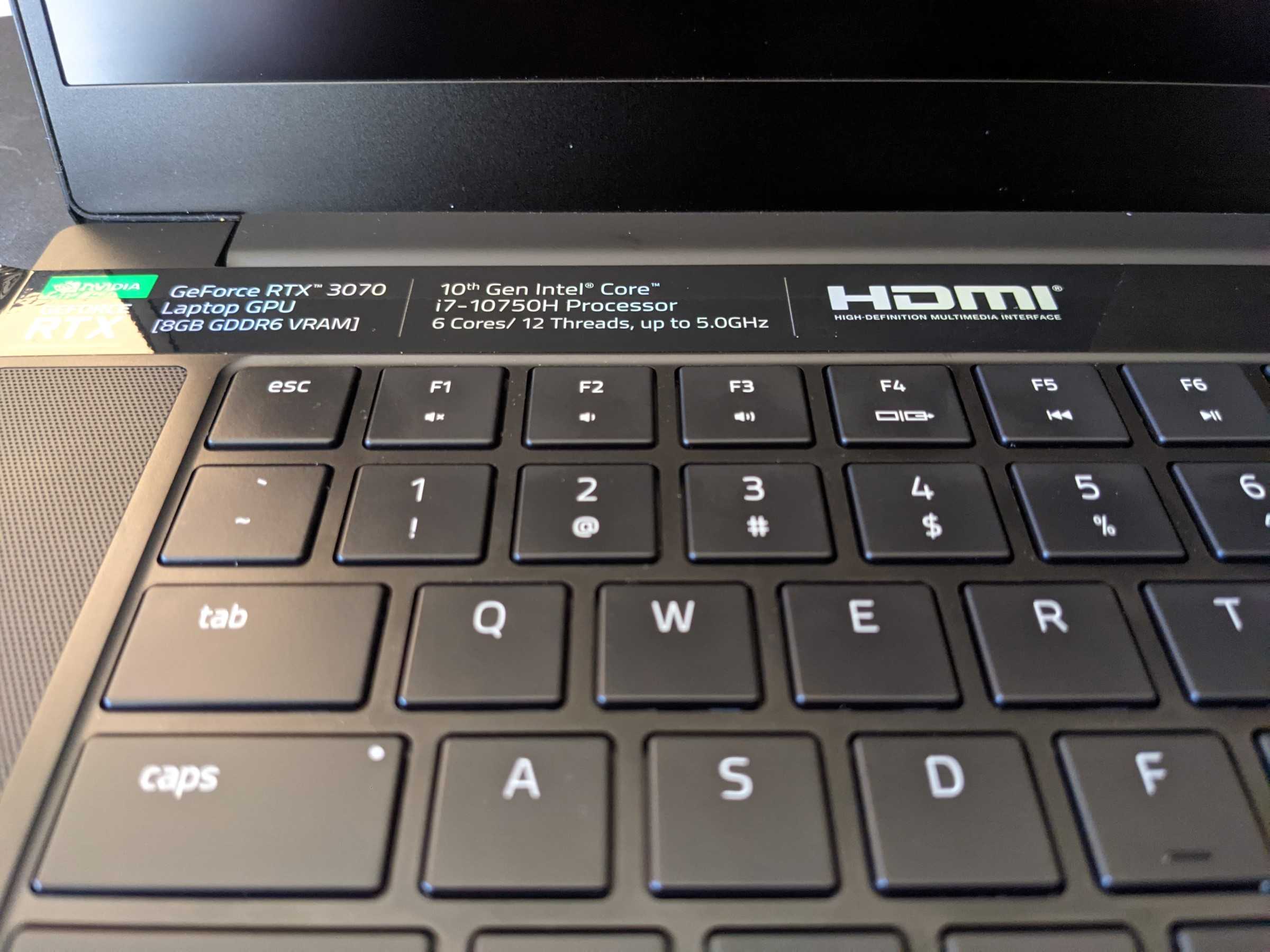 While you shouldn’t expect desktop-like performance from a gaming laptop—after all, the tech wizards have to eke performance out of much smaller parts—the Razer Blade 15 base model I tested is tweaked to perform within the bounds of its 1080p, 144Hz screen. Out of the box, the Razer Blade 15 favours (slightly better) battery longevity by defaulting to Nvidia Optimus mode, which uses a mix of Intel graphics and Nvidia GeForce RTX 3070 when gaming, but caps the screen at 60Hz.

Switching to dedicated-GPU mode is where the true gaming power is found, as well as the option to have a smooth refresh rate of 144Hz. For comparison, that refresh rate isn’t as fast as the 240Hz display in the Asus TUF Dash F15, but the Razer Blade 15’s 144Hz display on my review unit is far more practical when hitting frame rates between 60 frames per second (fps) and 144fps (and sometimes beyond).

Check out the benchmark results below.

There are some noticeable fps gains when comparing the F15 and Blade 15. In games with comparable fidelity settings, the Blade 15 lead is sometimes only measured in single-digit frames, but at others that lead extends into dozens and unexpectedly, for Rainbow Six Siege, hundreds of frames per second and with more demanding recommended fidelity settings.

The only game that falls below 60fps is Watch Dogs: Legion but, in fairness, that’s to be expected given how it performs with ray tracing set to ultra. Horizon Zero Dawn defaulting to medium fidelity settings was a surprise, particularly given the 103fps result, but the number of games scoring over 100fps is a good indication that you can tweak settings to take advantage of the 144Hz display.

More impressively, the 3070 inside the review unit held its own in comparable results with the full-sized Nvidia GeForce RTX 2080 Super that I used as a reference in my 3070 Ti review. The Blade’s 3070 came close to beating the desktop 2080 Super in a few cases. For those hoping they can take advantage of ray tracing and DLSS on the Razer Blade 15, the answer is “absolutely”: Shadow of the Tomb Raider, Dirt 5, and Wolfenstein: Youngblood all had very playable frame rates with ray tracing on (and even better performance for the supported games with DLSS enabled).

The table below shows how the Razer Blade 15 performs in benchmarking software 3DMark in terms of its CPU and GPU.

It’s worth noting that 3DMark determines different averages based on the parts inside the computer that’s being tested, which is why you see different averages across machines that may have identical parts. Despite falling below the average, the Razer Blade 15 base model still scored comfortably higher in 3DMark compared to the Asus TUF Dash F15.

In terms of practical use, the strangest thing about the Razer Blade 15 is that the fans power on to an audible (albeit low) whine occasionally during basic use, and sometimes when there’s nothing really going on outside of basic Windows background functions. During gaming, you’ll hear the fan, but it’s not obnoxiously loud, which means you shouldn’t have to up the volume too much to compensate when playing on speakers.

As for battery life, this is where the Razer Blade 15 base model falls well short. While the F15 managed nine hours in a Full HD YouTube video test, the best I could get out of the Razer Blade 15 was just over a couple of hours. If you leave it in dedicated-GPU mode, that number is even worse at around 90 minutes. While you can get a full charge in about the same time as that second battery test, it’s clear the Razer Blade 15 is meant more for gaming than everyday power-cable-free laptop-ing. 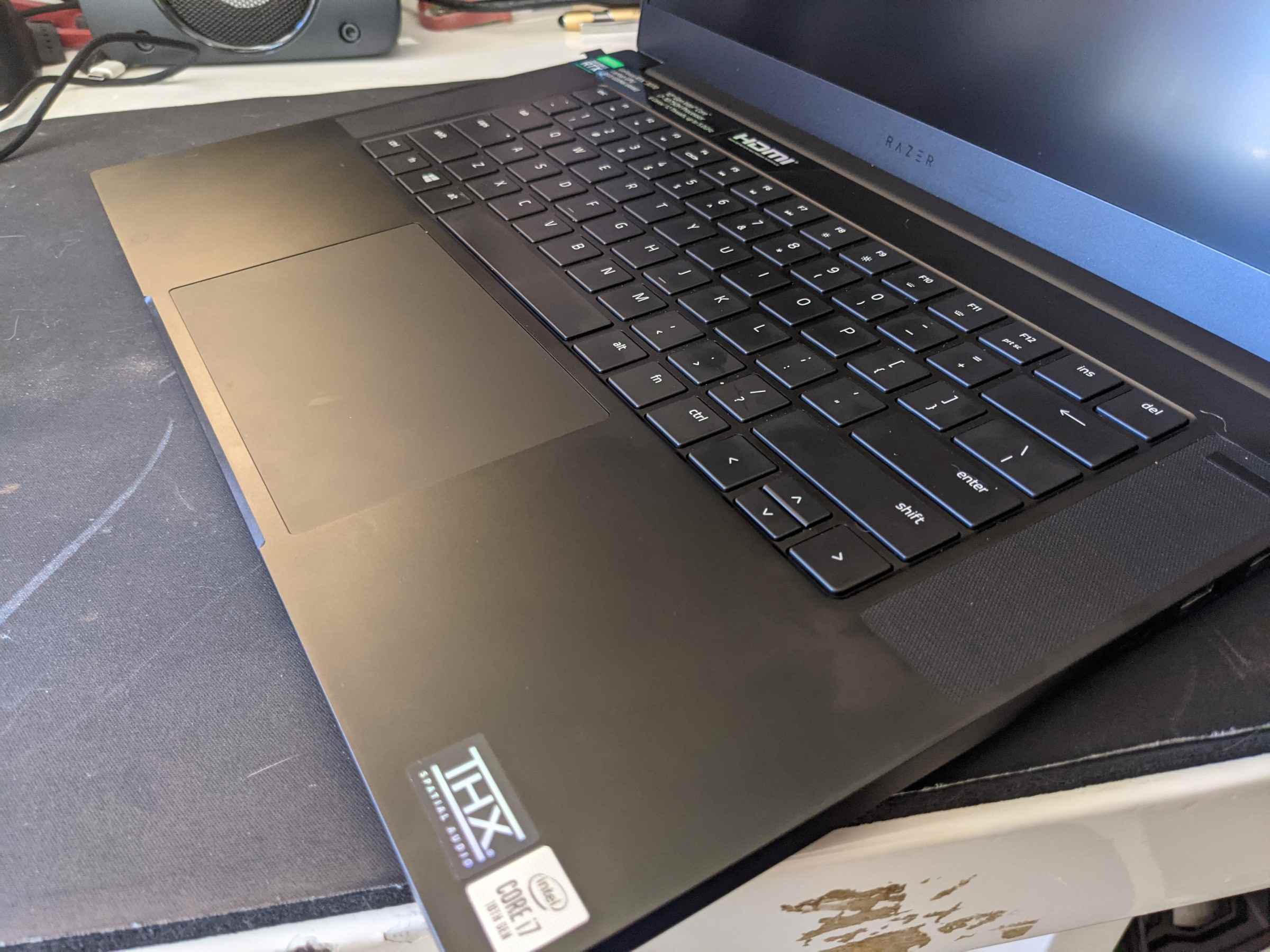 Out of the gate, the Razer Blade 15 has an RRP that’s about $1K more expensive than the similarly specced Asus TUF Dash F15. But if you pay one of the cheaper prices listed above, you get a more powerful gaming laptop for around the same price. It may not have great battery life, but treated as a dedicated gaming station that has the option to shift play or workstations, the Razer Blade 15 is well worth considering.