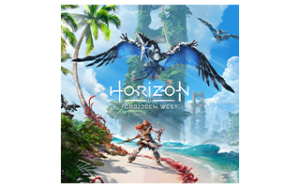 Horizon Forbidden West is a visually stunning game with clear love and care when it comes to world-building, characterisation and hiring the right voice actors. It’s a shame that attention to detail doesn’t carry over to beyond-basics platforming and middling combat that doesn’t feel as tight as the original game. There’s a massive open world with a great variety of tasks to complete, which you’re almost forced to do in order to avoid dying to one-shot bosses that take almost all of your ammunition to dispatch.

…even in performance mode!

The combat is unevolved 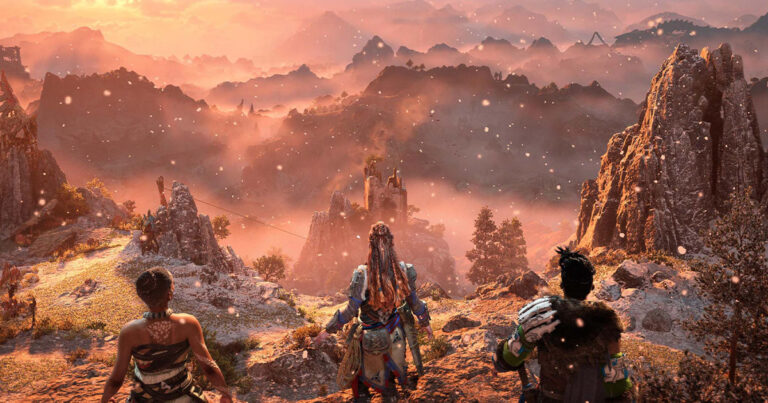 The year is 2009 and I’m playing through Assassin’s Creed II. I’m devilishly close to the end and that fistfight with the Pope where he keeps expositing as you continually slug him in the mouth. But before I finish the game, all of that main-path momentum is ruined by a requirement to sniff out 30 codex pages. A lot of my peers have justifiably raged at this point.

Wait. Why am I talking about Assassin’s Creed II in a Horizon Forbidden West review? That’s because from early on in Horizon Forbidden West, played on PlayStation 5, I couldn’t stop feeling like this game was going to pull the Assassin’s Creed II codex rug from under me. I got this feeling when three sequential main quests had recommended experience levels, which was something I was determined to ignore.

But I’m getting ahead of myself. Horizon Forbidden West is a sequel to Horizon Zero Dawn, and the slightly more sensical title doesn’t require you to play a bunch before you get what the mouthful of a game name means. Horizon Forbidden West picks up not long after the events of the first game and pits returning protagonist Aloy against the Inception of global threats: a threat within a threat.

Well, more accurately, it’s a threat atop a threat, but one of those threats is a meaty spoiler (particularly for lore lovers of the first game) that I won’t ruin here, and the other is that there’s a red plague that ravages all life it touches. There’s a countdown to when this plague will devastate life as Aloy knows it, which adds urgency to a mostly intriguing overarching narrative.

…combat doesn’t feel at all evolved, relegated instead to trial-and-error unlocks 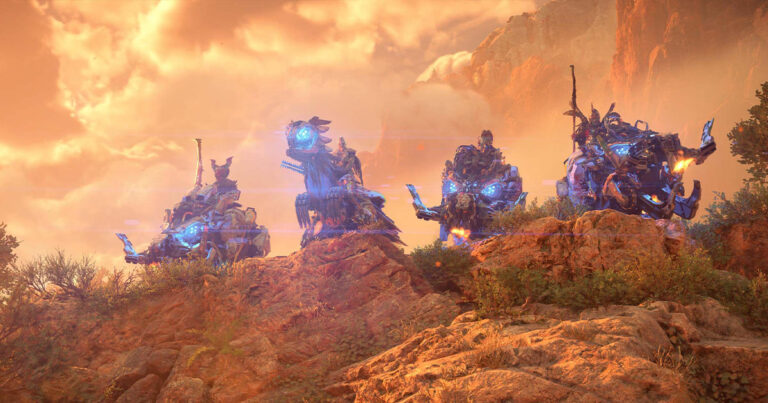 Unfortunately, despite this game being stunning to look at (even on performance mode), despite incredible voice acting and some compelling writing, and despite incredible world building, the baffling design choices start early. For starters, a red plague is easy to spot, but the bushes that conceal you are also red, which leads to losing health early on when you mistake the two on the trot.

When you’re crouched, enemies seem to find it difficult to notice you, sometimes when you’re right in front of them, and I’ll never understand why square is crouch instead of circle, which feels like it’s crouch in almost every other game. This isn’t so bad when you accidentally slide or crouch instead of rolling out in the open world, but during the often tedious platforming—which feels like Uncharted’s restrictive climbing rather than Assassin’s Creed’s ‘climb anywhere’ mentality—I found myself having to remind myself to not press circle. That’s because when you’re climbing, circle launches you off whatever you’re holding onto, and that sometimes ends up meaning you have to redo entire sections or crunching to low health (or death).

What’s worse is that the combat doesn’t feel at all evolved, relegated instead to trial-and-error unlocks in an admittedly expanded skill tree (frustratingly, at times, more errors than the potential fun of trials). The upgrades are split across more trees than the original (six this time), and sometimes unintuitively have unlocks buried in the middle or at the bottom that feel like they belong in another skill tree.

This forces you to stop and read before picking an upgrade, particularly after you’ve invested multiple precious upgrade points in a dud tree. This stop/look approach carries over to the gameplay, where every fight starts with Aloy loudly recommending you scan the threat, which is all well and good if you’ve got the drop on an enemy. But when you’ve been dropped into a boss fight, sometimes against multiple foes, stopping to scan, then D-padding through the component options and praying to the postapocalyptic gods that you have the right gear to make the fight less of an artificially inflated marathon, well, it ruins the pacing of the brawl from the get-go.

In terms of the skill trees, I started investing in the melee tree because I’d watched a dev video suggesting the melee combat had been improved. Fair warning: that’s a big mistake if you’re a main-pather like me. Late in the game I found value in some of the melee upgrades, but they’re mostly not worth the risk of using against bigger baddies, and absolutely best avoided in almost every boss fight. 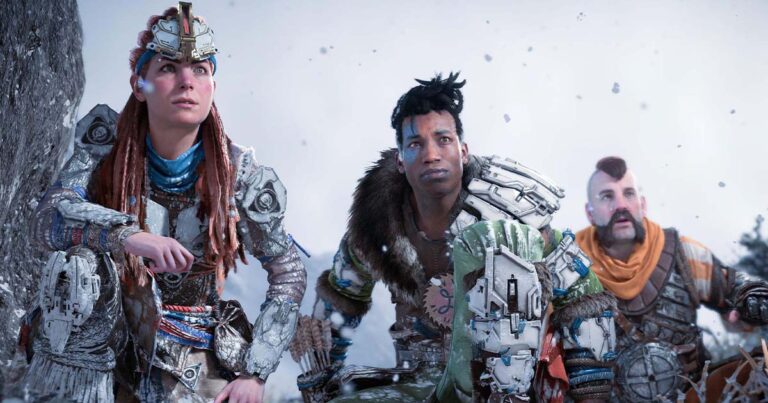 It's easier to think of Aloy as a ranged hunter first, and everything else second. You can invest in stealthy upgrades or machine-riding buffs, but the former is bare-bones and the latter is situational (outside of the godsend spike-thrower upgrades), not to mention mostly off the main path. How Guerrilla Games has made a big deal about improving the melee and hasn’t added a block ability, something human foes are quite adept at doing, is beyond me. Techland amended a similar oversight in Dying Light 2.

While they’re different perspectives and distinct takes on postapocalyptic worlds—one against zombies, the other against robots—it was painful to shift between Dying Light 2 and Horizon Forbidden West. While Horizon Forbidden West smashes Dying Light 2 on the world-building, writing and voice-acting front, it falls well short when it comes to the all-important gameplay loop: namely, the abundance of combat and platforming. 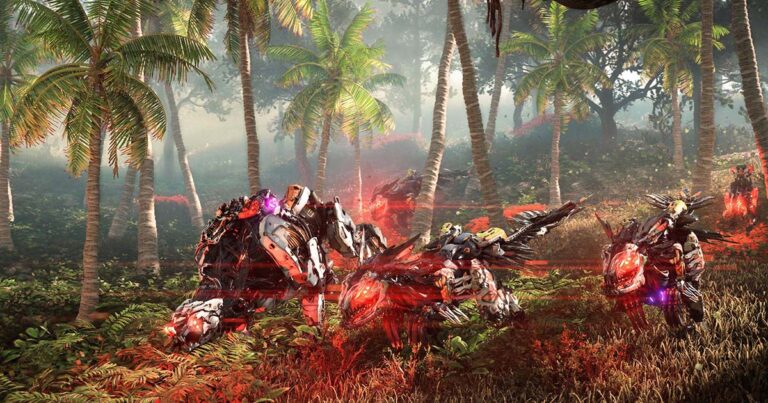 There’s great variety in the quests of Horizon Forbidden West, and it’s kept me coming back for more after the credits have rolled, but I loathe whenever there’s platforming and the main fun I’m having with endgame combat is abusing the power fantasy of annihilating lower-level foes in the starting areas. Before endgame, it was the opposite experience for me as I fervently stuck to the main path, where I was constantly up against spongey foes.

In fairness, the game reiterates the level requirements a few times during the campaign, and it does invite you to do more side stuff when you get to the 20-minute final stretch. For context, at the end of that final stretch, I was level 25 and the final boss was level 45, easily able to one-shot me with most of its attacks, and incredibly resilient to my weapons.

Initially, this boss wrecked me. Fair enough, right? After all, there’s a 20-level difference. But the most recent checkpoint is at the boss fight. In fairness, Horizon Forbidden West has a great save system that remembers a bunch of recent quick saves, manual saves and multiple auto-saves, so I could drop back to before the fight easily enough. Except I’d already fastidiously vacuumed up all of the pick-ups in this concluding section, and I couldn’t access my stash to nab my hoarded crafting items, so the only alternative was to wind it back to before the final section and do a whole lot of side content to get my level up.

I decided to tough out the fight and eventually won, despite how the tactics Aloy continually espoused didn’t seem to work too well, despite running out of ammo for my heavier-hitting weapons, and in spite of this final boss having cheat attacks that ignore cover and seemingly home in on you. It was more relief than elation by the time I won that fight. 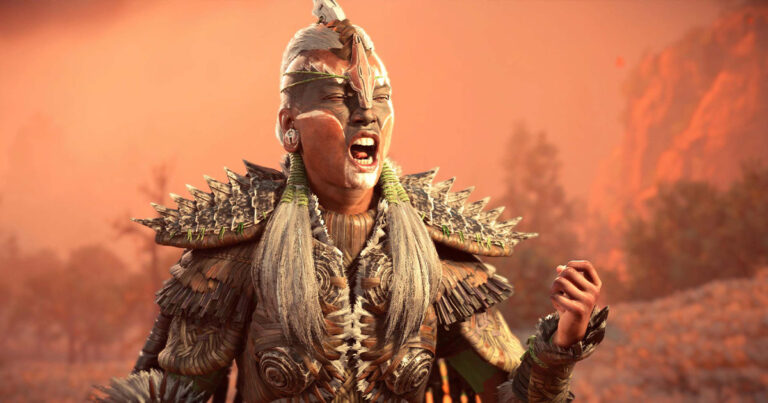 Depending on where you look, the numbers vary from around 30% to a lot lower of people who actually finish games. Asking players to not only tackle a 20-hour main campaign but effectively level-gatekeeping main quests and the final section behind what amounts to hours of side content to suitably level up feels like a strange design decision. I was playing on normal difficulty, which felt balanced for most fights except for the boss battles and bigger robots.

It's a bold choice that will surely pay off for the players who have the time and patience to tackle the game world as intended, clearing most or all of what’s on offer in each area (metroidvania requirements notwithstanding). But for the time-poor, story-focused gamer looking to stick to the main path and potentially tackle some of that side stuff later (which you can absolutely do, by the way), be warned you have a lot of frustrating bigger fights ahead of you that feel artificially elongated.

Ultimately, Horizon Forbidden West isn’t a terrible game—far from it—but it is one that’s missed the memo on the all-important refinement and escalation of its gameplay loop, confusing the expansion of what you spend most of the game doing with simply offering more to do in the game world. When it works, it’s a compelling game world. When it doesn’t, Horizon Forbidden West is frequently just as frustrating as it is fun.

I haven’t factored bugs into the score and, hopefully, you won’t get to experience any of these when you play Horizon Forbidden West. There was a patch that dropped before release that pledged to fix some of the jank, but I was still experiencing the jarring black loading screens, janky enemy AI when stealthing and even enemies stuck inside walls after the patch dropped.

I’ve honestly never played a PlayStation first-party game that’s felt like it needs more time in the oven. Days Gone had its issues, and Horizon Forbidden West certainly isn’t Cyberpunk 2077 or Battlefield 2042 in its lack of polish, but it does make you wonder why it’s being rushed out when more time could have refined bugs and potentially some of the gameplay issues.

Here’s a breakdown of the buggy weirdness I encountered during my 30-odd hours with Horizon Forbidden West:

Here are the best prices for Horizon Forbidden West in Australia

Here are answers to some of the most frequently asked questions about Horizon Forbidden West: