If you want to go wire-free for your daily earbuds there are few doing it better than Sony right now. 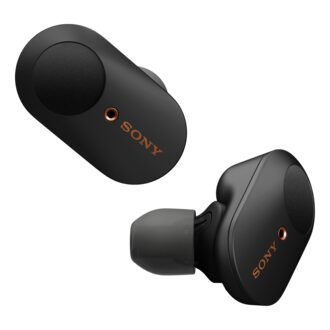 It's worth noting that the Sony WF-1000XM3's touch controls don't include volume control and while we love the copper/black combo that we reviewed, there's also a white/grey model available.

If you want to go wire-free for your daily earbuds there are few doing it better than Sony right now.

Sony has pumped up the volume on its range of audio products over the last few years. Its latest wireless over-ear effort, the Sony WH-1000XM3 entered the ring with audio heavyweights like Bose and came out on top. Its first few attempts at truly wireless earbuds didn’t have the chops to go toe-to-toe with Sennheiser, Bose or even Apple but its latest contender in the space, the 1000XM3 Earbuds, is ready to take the title belt.

We’ve spent several weeks with Sony’s WF-1000XM3 wireless noise-cancelling earbuds and while there were a few bumps along the way, we came out the other end completely floored by the earbuds’ battery life, comfort factor and next level noise-cancelling. 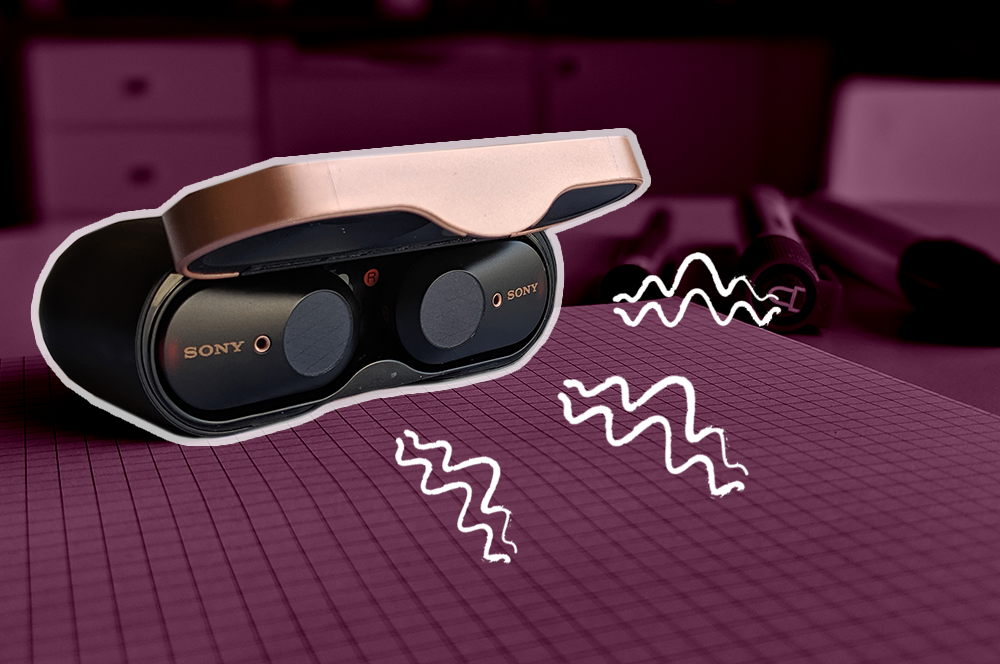 First up, let's talk about fit. For as long as I can remember, I’ve always struggled to find in-ear headphones that I can wear comfortably for extended periods. I’m always plagued with two main issues: after a few hours of use, my ears begin to throb with pain and my left ear seems to require a separate fit to my right. I can have a pair of headphones where the left bud fits like a dream and the right falls out at the drop of a hat (or more accurately when I bend over to picked up the hat). I’m like a stereo Cinderella searching for a pair of Prince Charmings to jam in my ear holes.

The Sony WF-1000XM3 earbuds come with six replacement earbud tips, each a different size and material. There are three pairs of silicon replacements and three pairs made from foam. This was nothing short of a dream for me. I’ve used a slightly larger bud for my tiny right ear and haven’t had any issues with the earbud falling out accidentally. And though I didn’t reach a conclusions on whether foam or silicon is more comfortable, I’ve found that the ability to switch it up halfway through the day has done wonders for my overall comfort.

To All The Noise I’ve Cancelled Before

The next best thing to love about the Sony WF-X1000M3 earbuds is its pint-sized crack at noise-cancelling. By their very nature, in-ear headphones can’t drown out ambient sound like a pair of over-ears can and the WF-X1000M3 Earbuds can’t compete with its full-sized counterpart, the WH-1000XM3s. Still, when it comes to wireless earbuds, Sony’s latest in-ear iteration does it better than any other in-ear option I’ve ever tested.

In a typical office environment, I get nearly no background noise from chatty colleagues or the communal Sonos speaker. And the thunderous rumble of my bus’s engine is almost completely muffled with noise-cancelling activated. I even managed to have a crystal clear conversation over the phone while riding my bike home (save for some wind interference on the in-built microphone).

Side-note for the audio nerds out there: the WF-1000XM3s don’t have LDAC support rather AAC and SBC; only the sharpest audiophiles should be able to tell the difference there. The reality is, the WF-10000XM3s sound sublime. I’ve been reviewing the Huawei Freebuds in tandem with the WF-1000XM3s and there’s a stark difference in clarity (though the Freebuds have their perks).

Thanks to my aforementioned picky ears, I tend to preference over-ears for day-to-day background music while I work but after switching back to a pair of HyperX cans, I’m already missing the crisp, isolated aural edge of the WF-1000XM3s. They are quite simply some of the best headphones I’ve ever tested, let alone some of the best in-ears.

Sony’s clever little HD Noise Cancelling QN1e processor claims to “cancel significantly less noise across almost all frequencies” while using less battery power. Based on my experiences so far, I feel that’s a completely valid claim. I almost always have noise-cancelling switched on and I’m yet to run the power completely dry.

If you’re more of a power user than I am, you’ll be happy to hear that the charging case takes a USB-C cable and only takes about 1.5 hours for a complete charge and holds a whopping 18 hours of charge for the Earbuds.

Over the last two weeks, I’ve only had to charge the case once, which was after I gave the headphones an absolute flogging on a long Sunday walk. 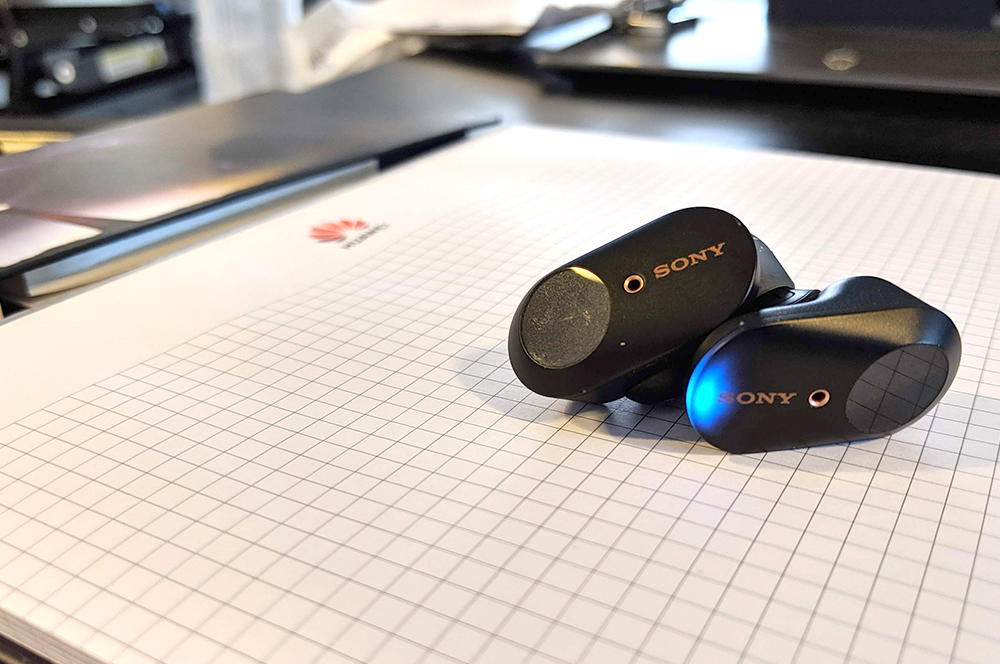 The not-so-goods: What we wish was better about the Sony WF-1000XM3s

There are only a few drawbacks to Sony’s powerful little buds but collectively, they can be quite a headache at times. Unfortunately, the only cons available are the product of some killer pros. For example, there’s the charging case.

18 hours of additional charge is a godsend and something I’m not sure if somebody like me, who can barely remember to charge their phone every night, could live without. But if you want to net that big battery life, you’re going to need a bigger case, which is what the WF-1000XM3s have.

In the grand scheme of things, the case is pretty compact and you’re not going to have any issues fitting it in most pockets. That said, compared to the pill-shaped Freebuds Lite case I’m using, or even Apple's slimmer Airpods case, it’s a little chunky. This was rarely an issue but in a pair of skinny jeans, with my wallet and Pixel 3 taking up most of the pocket real estate, I had to leave the WF-1000XM3s at home on a few occasions. 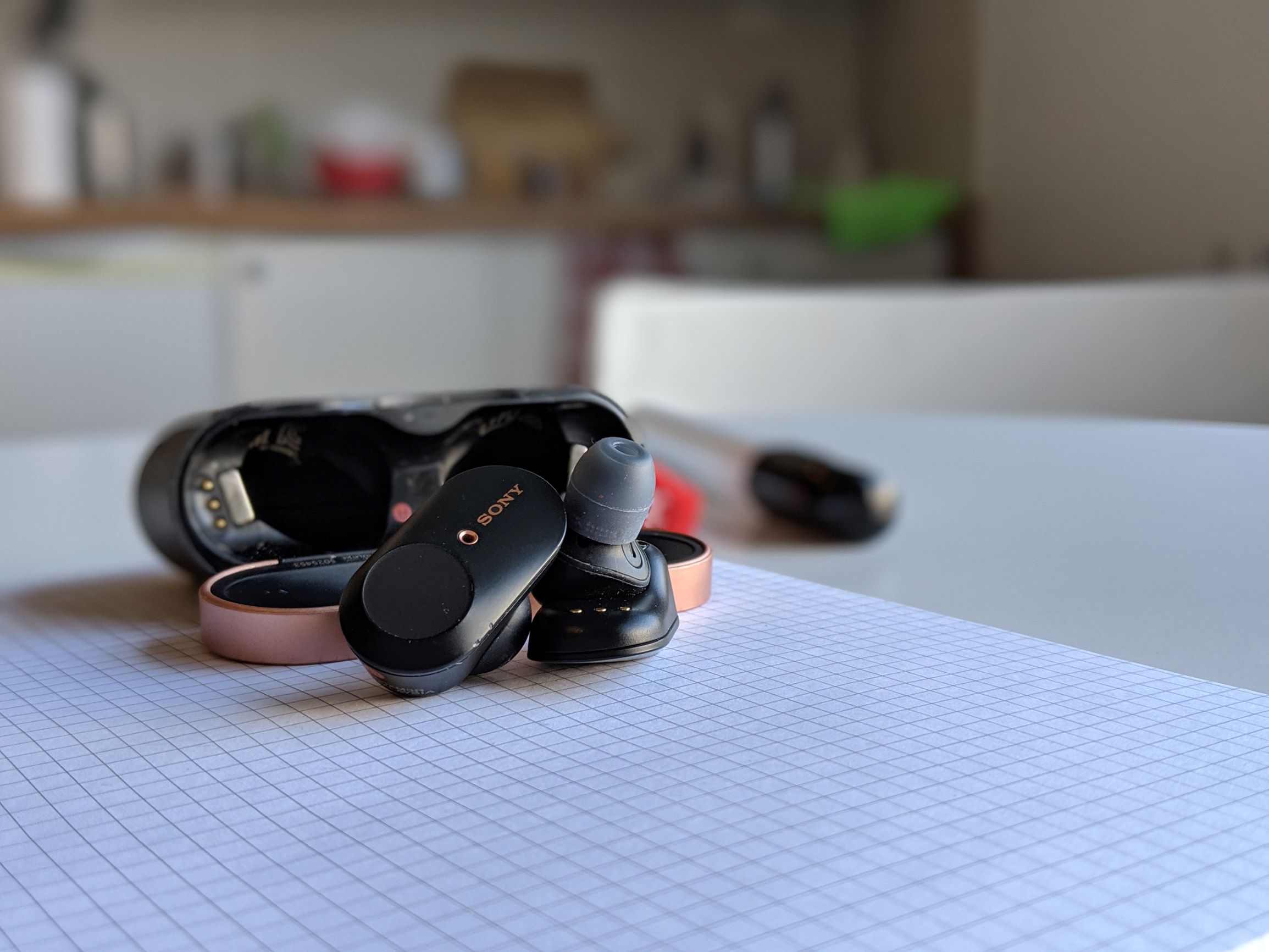 Speaking of extra bulk, the WF-1000XM3s earbud design isn’t as inconspicuous as the more traditionally-shaped buds (again, Airpods and Freebuds). Don’t get me wrong, these are some very classy earbuds. I reviewed the black variant, which has accents of bronze (there’s also a white model) and overall I think the WF-1000XM3s are more stylish than most earbuds. But they don’t sit as flush as I would like them too and they certainly drew more attention on the street than I would have hoped.

When I first saw a pair of Airpods out in the wild, I thought the hanging “tail” of the earpiece was pretty naff but after some time with the WF-1000XM3s thicker design, I prefer it the look of Airpods. The WF-1000XM3 have the sort of classic Bluetooth earpiece appeal that makes me feel like a late 90s investment banker.

Each earbud is around 8 grams in weight, which is twice as heavy as an Airpod earpiece. On a few occasions, I accidentally knocked one out of my ear and it hit the concrete with a mighty crack. There was no lasting damage but it does feel like I could do a number on them with a few more fumbles. 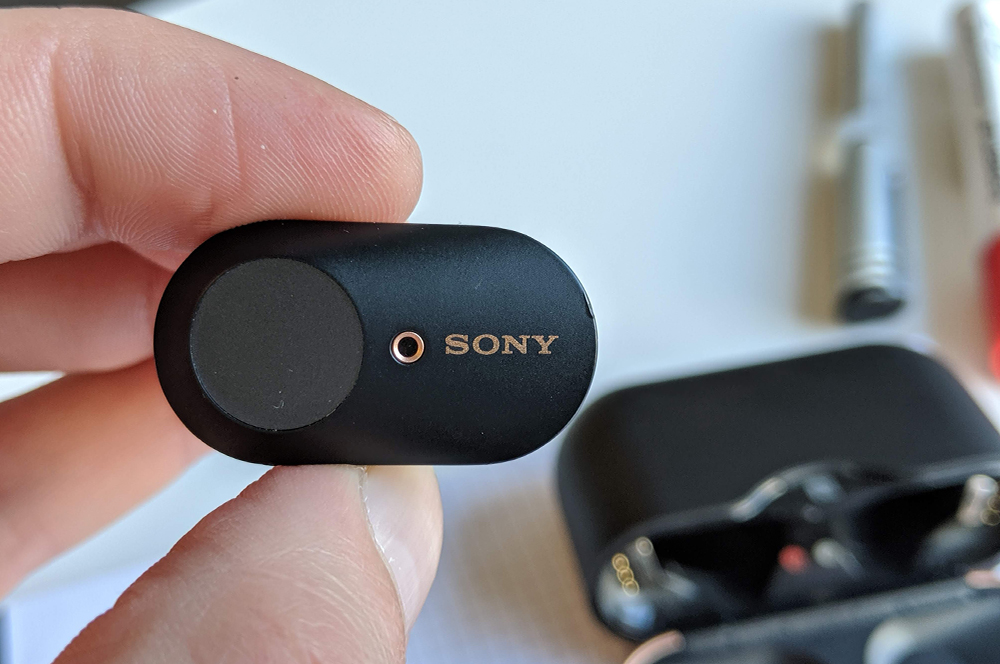 Long in the tooth

The WF-1000XM3s use Bluetooth 5.0. As the latest in Bluetooth technology, this has a lot of benefits. The short and skinny of it is this: Bluetooth 5.0 is faster, has better range and has Dual Audio.

The speed factor simply means you’re less likely to experience an audio delay while streaming video over Netflix and YouTube.

For distance, Bluetooth 5.0 can communicate up to 240 meters. I could walk the full length of our office building without any interruptions but any interference (from walls, devices etc.) dropped the connection like a hot potato, even in close range.

Lastly, there’s the Dual Audio component, which is most noticeable in the WF-1000XM3s. Bluetooth 5.0 lets you stream a single audio source to two separate devices (most commonly used in smartphones to connect to multiple Bluetooth speakers). With the WF-1000XM3s, Dual Audio means you can use one earbud at a time if necessary (while charging the other, for example). And you can remove one earbud without pausing the music.

Speed, Range, Dual Audio. Tick. Tick. Tick. These are all great features but what I want from a new Bluetooth technology is improved stability and easier connection management.

While using the WF-1000XM3s, I was repeatedly forced to turn the disconnect Bluetooth on previously connected devices when switching from my phone to my laptop, or vice versa. Otherwise, I’d experience consistent dropouts and scratchy audio.

There’s also no power or sync button on the earbuds or charging case. The idea is that shouldn’t need it. When you take your earbuds out of the case, they power on and enter pairing mode. That’s assuming everything goes to plan. When I first experienced connection issues with the WF-1000XM3s, the right earbud completely dropped out. It wouldn’t pair, it wouldn’t charge and I assumed it was dead on arrival. I left it on charge overnight and by some miracle, the right earbud was working again the next morning. But the whole time I was wishing for a power button so I could try a hard reset.