Those who attempt to reinvent the monitor often end up making the same old mistakes. 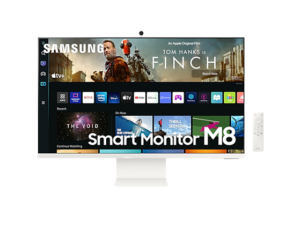 A focus on features rather than specs makes for a welcome change, but Samsung's latest attempt to reinvent the monitor ends up feeling like a solution in search of a problem. The Smart Monitor M8 is a jack-of-all-trades, but a master of nothing in particular.

It's easy to fall into the trap of seeing the Smart Monitor M8 as Samsung's answer to Apple's latest luxury display, but it's actually the continuation of an idea that's driven the company's product roadmap for the last decade or so.

With the Smart Monitor M8, Samsung are (again) trying to realise the dream of convergent computing. Growing out of the idea that it's better to have less tech with broader functionality in your life rather than lots of specialised hardware, the pitch here is that you can have one device to rule them all.

The Samsung Galaxy Note was once the torchbearer for this fantasy, but now the Smart Monitor M8 is here to carry the flame into 2022 and beyond. 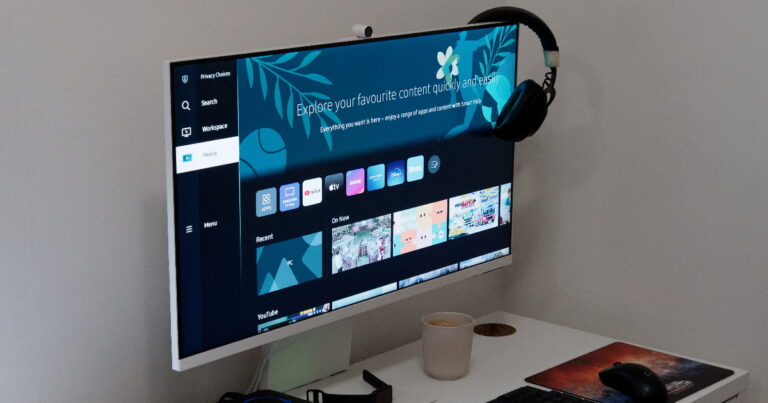 How much does Samsung Smart Monitor M8 cost in Australia?

Cheap for a TV, expensive for a monitor

In Australia, the Samsung Smart Monitor M8 can be found for around $1199. That's solidly middle of the field when it comes to 4K monitors. It's not quite budget-grade, but it's certainly cheaper than fare like Apple's Studio Display.

Check out the table below for a round-up of pricing from local resellers and retailers.

A creative canvas with a sleek setup 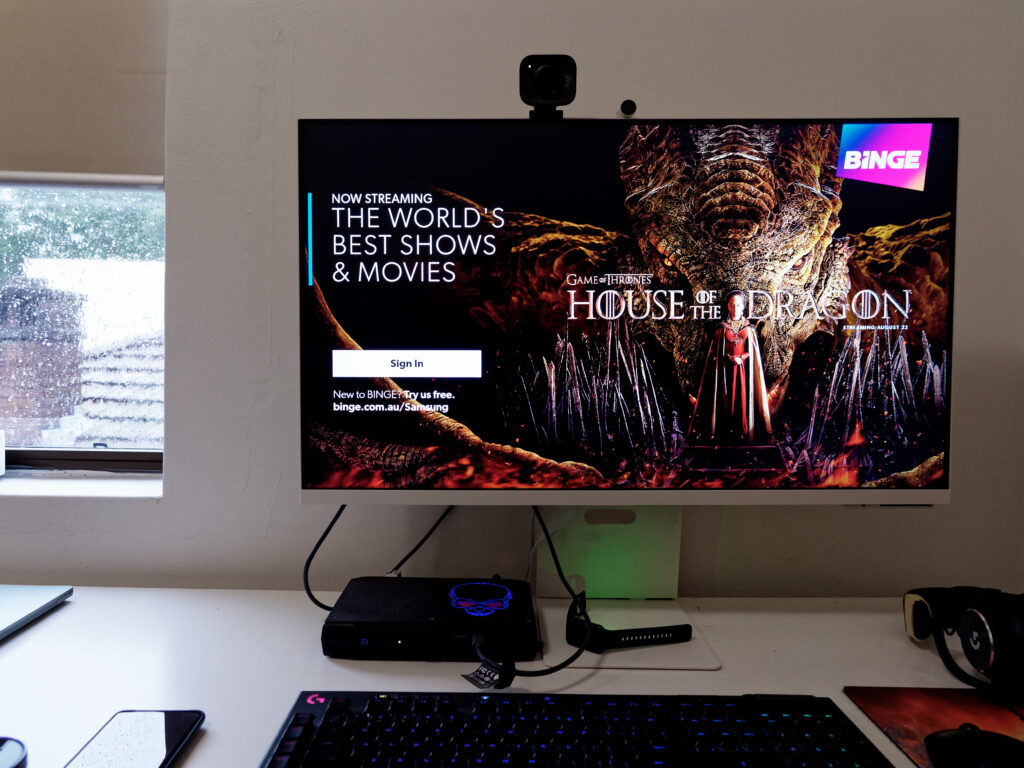 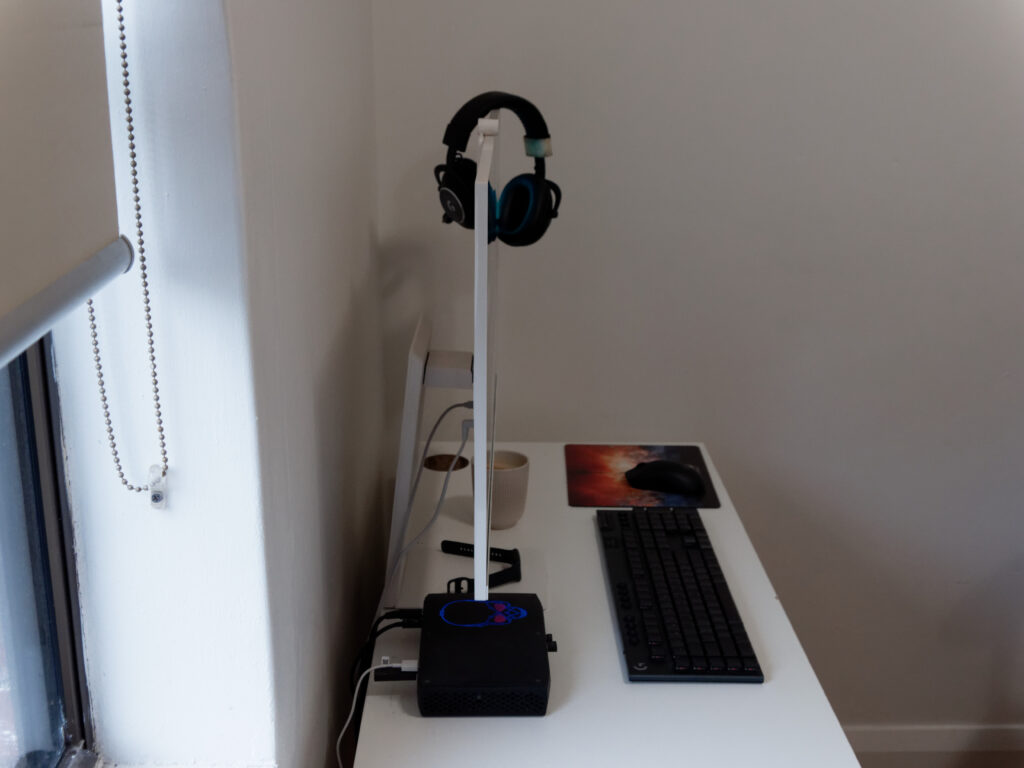 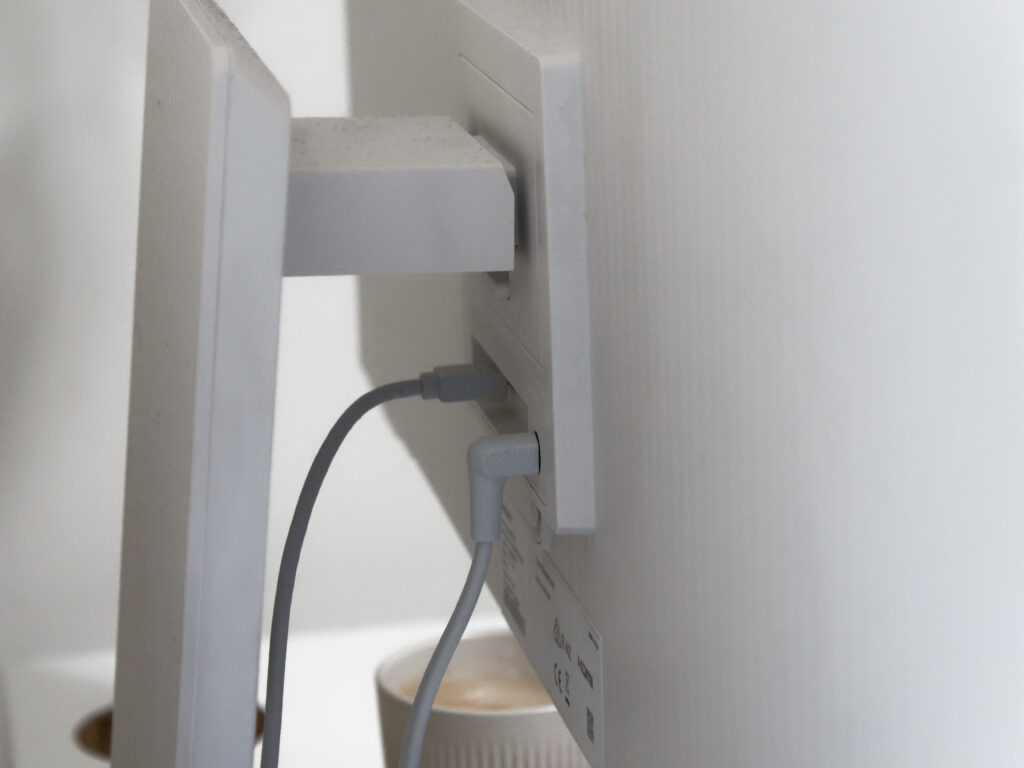 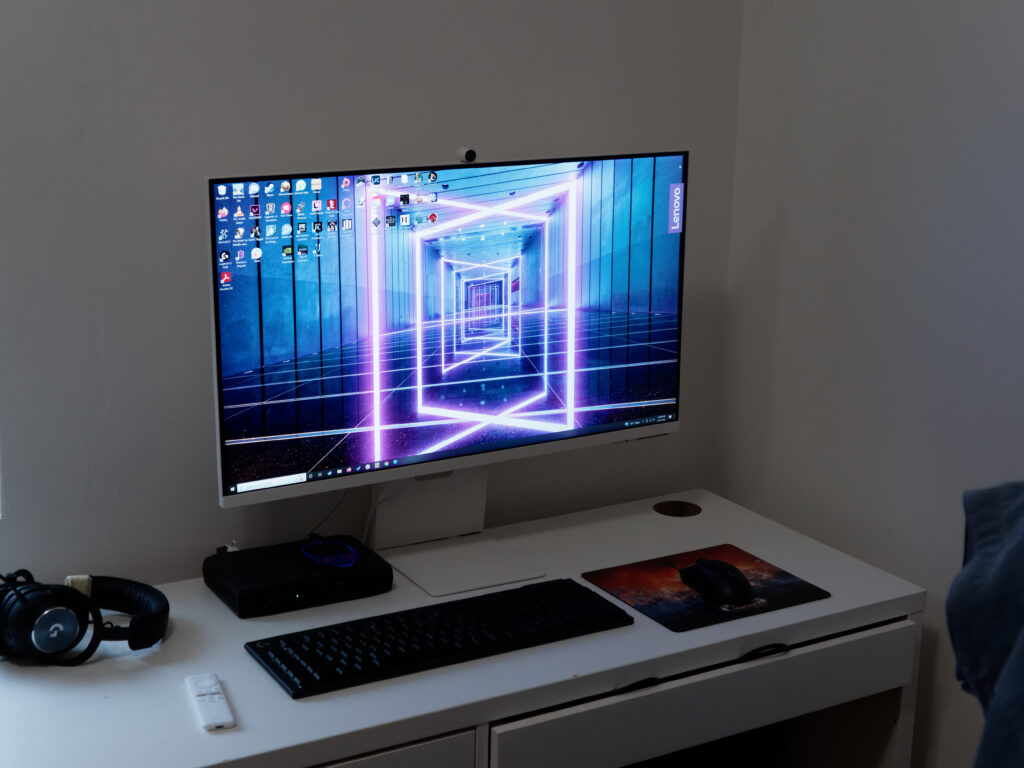 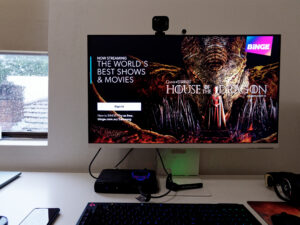 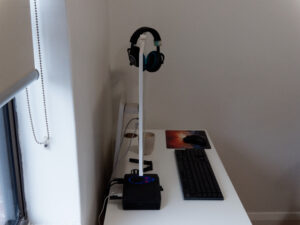 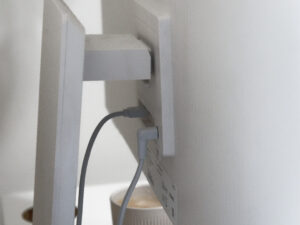 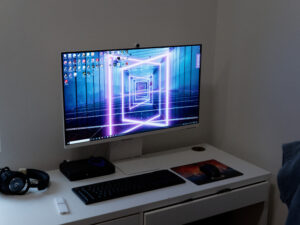 Available in a single 32-inch size, the Samsung Smart Monitor M8 combines the brains of a smart TV with the looks of a sleek desktop display.

With a panel that's just 11.4mm in terms of thickness, the monitor comes across as especially slim (even in comparison to previous Samsung's earlier efforts like the 2019 Space Monitor). The bezels are similarly slight, measuring approximately 6mm on the top-most and side edges of the screen.

The bottom-end of the monitor has even thinner bezels but more of a chin, which pads out the form-factor somewhat. Still, for the most part, there's little fat to be found here.

Setting up the Samsung Smart Monitor M8 is also blissfully simple. The stand comes in two parts, which require a screwdriver to assemble. The display itself then attaches neatly onto the upper half of the stand via a slide-in mechanism.

Despite the thinness of this hardware here, the foundation holding the Smart Monitor M8 aloft proved to be surprisingly sturdy. If you've got a smaller PC, gaming console or are looking to connect this thing to a laptop via a dock, there's more than enough room for it to sit underneath the M8.

That said, Samsung's Space Monitor has been my go-to throughout the last two years and I quickly found myself missing the extra flexibility it brought to the table. While the height at which the Smart Monitor sits can be neatly adjusted, the viewing angle on the stand itself is nowhere near as versatile as the arm on the Samsung Space Monitor.

On the other hand, one front where Samsung's latest creative canvas has a clear edge is in screen quality. While its packing the same 4K resolution found in its 2019 counterpart, the new Smart Monitor is brighter, has more contrast, and boasts support for HDR10+ content.

The back of the new Smart Monitor houses a handful of ports, but those looking for a conventional connection layout are likely to be disappointed. There's a pair of USB Type-C ports and a single Micro HDMI port for your convenience, but that's it when it comes to cables connectivity.

In addition to a set of built-in rear-firing speakers, the Samsung Smart Monitor M8 also comes with a web-cam accessory that incorporates similar face tracking and active-framing technology as Apple’s new monitor does. While attaching this webcam to the back of the monitor is easy enough, getting it to play nice with your PC is a little trickier.

The only way to utilise the detatchable webcam that the Smart Monitor M8 ships with is via the Google Duo app built into Samsung's smart interface. If that's not your video conferencing platform of choice, you're out of luck.

Putting the actual quality of the webcam (which isn't particularly great) to the side, the fact that you can't just wire the accessory directly into your PC, stick it on the top of the monitor and cuts deeply into the appeal of Samsung's do-it-all monitor. Honestly, it's baffling to see a blindspot this obvious from a monitor that's primarily positioned as a smarter alternative.

More smarts than I know what to do with 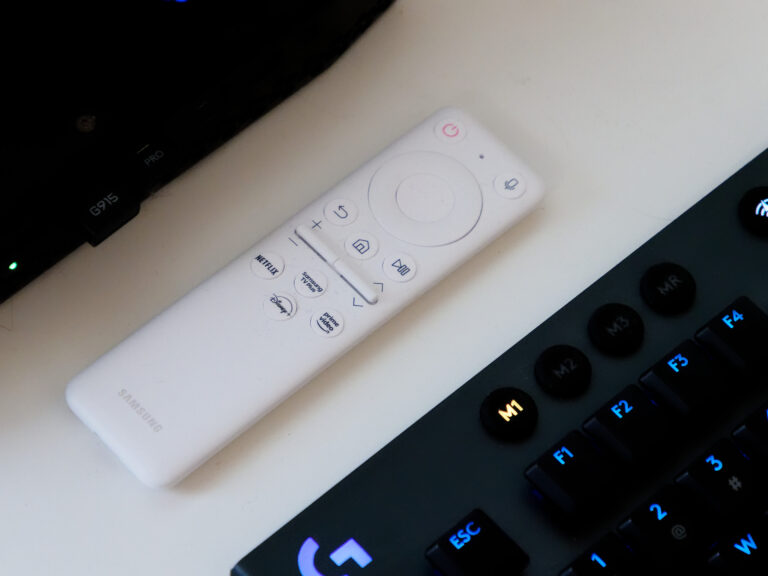 If the 5K resolution found on Apple’s Studio Display is more of a novelty than a necessity, there’s a decent chance that Samsung’s M8 Smart Monitor be able to hold its own as a half-decent substitute.

From regular web browsing to photo editing and gaming, everything we could throw at this screen looked as crisp and detailed as the specs would lead you to expect. What's more, as mentioned above, Samsung's latest has a lot more in common with its TV cousins that most other monitors.

Another key shift is the reliance on a remote rather than rely on a set of physical keys. Instead of the barebones menu found in other monitors, pressing the home key on the remote for the monitor will bring up the same Smart UI interface seen in Samsung's latest TV offerings.

Leaning on a tile-based layout, this interface allows for easy access to all the usual streaming services. It also allows for fast and easy access to a few other Smart Monitor specific functions, such as support for Samsung's DeX mode on compatible smartphones and tablets.

Depending on your desktop setup, this extra smidge of smarts is either the best or worst part of the Smart Monitor M8. If I had a home office setup with a games console connected to it or one where binging Netflix on this thing made sense, I could imagine that having a smart TV UI here might add something to it. However, in the absence of a setup like that, it feels like extra baggage and clutter to the everyday experience of using this thing.

If you're looking at this as a potential secondary monitor, there might be some legitimate advantages to offloading a video stream or two off your GPU. Unfortunately, using the Smart Monitor in the way it was intended is the fastest way to discover the limitations of having one monitor to rule them all. At a certain point, it just feels like you're paying to add extra steps to the process.

No amount of smart TV tech can change the fact that the last place I want to sit back and watch an episode of Stranger Things is the place I do my work.

All told, the Samsung Smart Monitor M7 looks a little worse when it comes to HDR content but offers a lot more options, which may make it a better fit for some users.

Is the Samsung Smart Monitor M8 worth buying?

Samsung's feature-first approach to monitors is fresh, even if it isn't the future 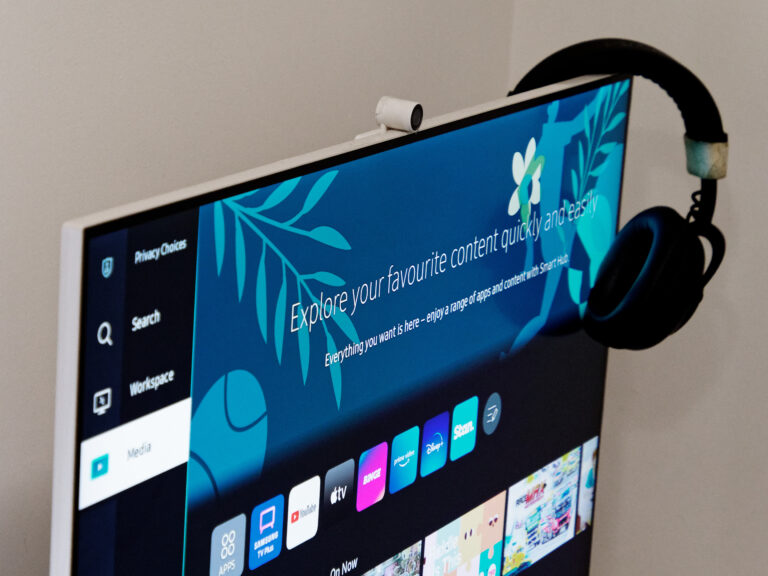 If the part of the Studio Display that appealed to you was that Apple made a monitor that offered more than just higher resolutions, Samsung’s Smart Monitor M8 might strike the same chord at a cheaper price.

As far as monitors go, it ticks a lot of boxes. What's more, many or most of those features can't be found in more traditional fare. This jack-of-all-trades approach to the category isn't without its drawbacks, but it is a sharp contrast for the competition.

Samsung's convergence hasn't quite arrived with the Smart Monitor M8, but if you fancy a taste of this particular future, it'll hold its own as an appealing appetizer. Just don't confuse it with the main course.