Samsung S95B OLED TV
See it at The Good Guys

Stress testing technology is an important part of my job, seeing how it holds up under the worst-case scenario. For the night I spent with Samsung's new S95B OLED TV, this meant packing my studio lighting and a blow torch.

OLED is often considered the gold standard TV technology type. OLED displays are self-lightning, where individual pixels are switched on as needed, and remain black otherwise. This means you get "perfect black"; when a pixel isn't being used, it's indistinguishable from when the TV is off. On a traditional LCD LED TV, the darkest you can go is a very dark grey, thanks to the backlight.

The main trade-off with OLED TVs is they tend to be dimmer, which makes them hard to watch if there's too much ambient light. I've owned an OLED TV for about five years, and on sunny days, I've got to close the blinds to ensure the screen doesn't get overpowered.

With its new OLED TVs, Samsung says its paired the panel with its Quantum Dot technology, resulting in what should be a brighter display that doesn't compromise on blacks. The panel maxes out at 1,500 nits of peak brightness, while LG's bright OLED panel currently sits at 1,100 nits. In theory, this could help solve OLED's biggest weakness. It could be the best of both worlds. 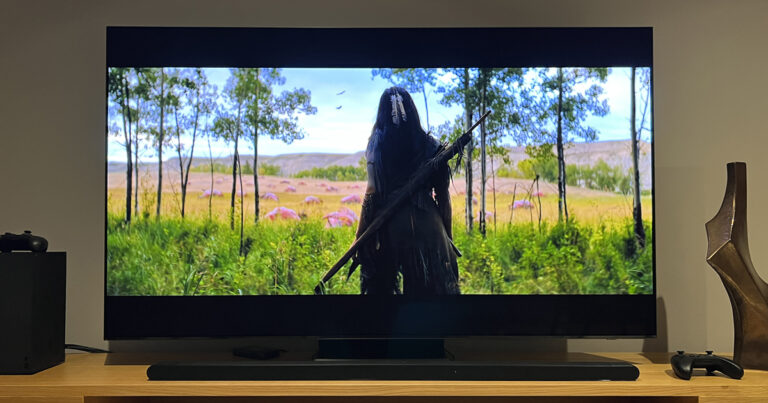 How much does the Samsung S95B OLED TV cost in Australia? 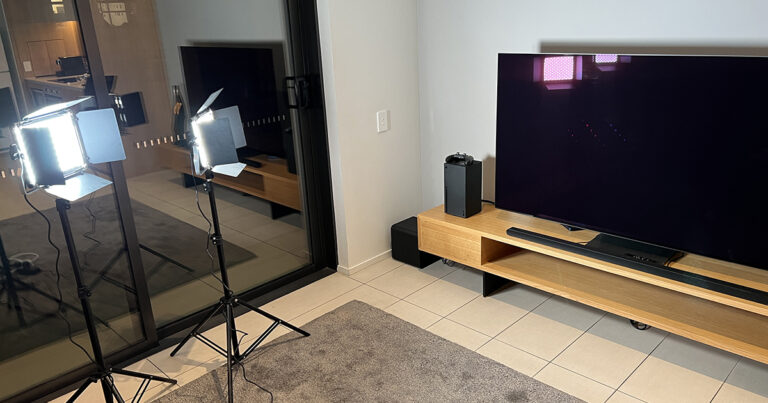 I was offered an overnight stay in a hotel room to test out the 65-inch model of the S95B OLED, as is fairly standard practice with more expensive TVs. A hotel room at night isn't the best option to test how a TV fares with sunlight, and from the forecast, I knew the following morning would be overcast and raining.

If I couldn't have actual sunlight to pit against the TV, studio lights were obviously the next best thing. As for the blow torch, well the sun is technically on fire. 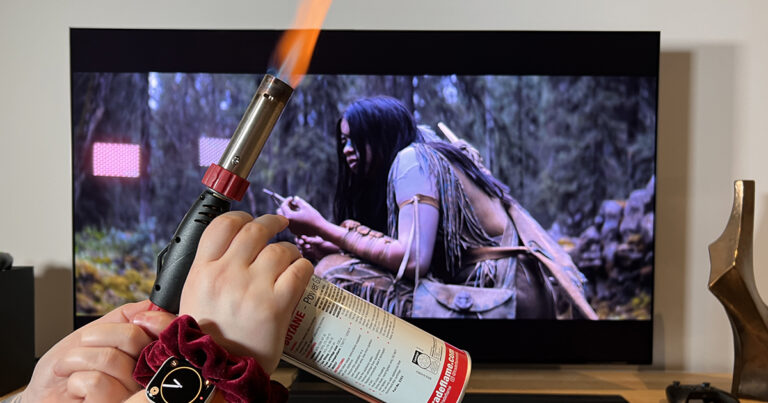 I did not actually put a blow torch to the TV. It’s nowhere near bright enough to be a proper test.

On the other hand, my studio lights are about 5,000 lumens each at maximum brightness. For comparison, a candle has a brightness of about 12 lumens, while light bulbs tend to be between 600 and 1,000 lumens. (My kitchen blow torch is definitely closer to the candle part of the spectrum.) While not exactly replicating sunlight, my two studio lights effectively added ten bright light bulbs to the room, directly angled at the TV.

So let's get this out of the way first, Samsung hasn't rewritten physics. Since OLED pixels are off when displaying black, extra brightness isn't going to do much. Short of making pixels tiny black holes that suck in all light, it makes sense that an OLED TV is going to perform best in a dark space.

The true level of black does however make OLED TVs ideal for dark scenes, revealing details that other TVs wouldn’t. As such, my first test was with one of the night time scenes from Prey.

I started by turning all the hotel lights off, and the picture was absolutely stunning. The contrast was top notch, there wasn't any reflection from the room, and the black cinematic borders all but melted into the room.

(Note that these photos are exaggerated due to how phones process photos, and are more so illustrative than presenting a true-to-life image of what I saw.) 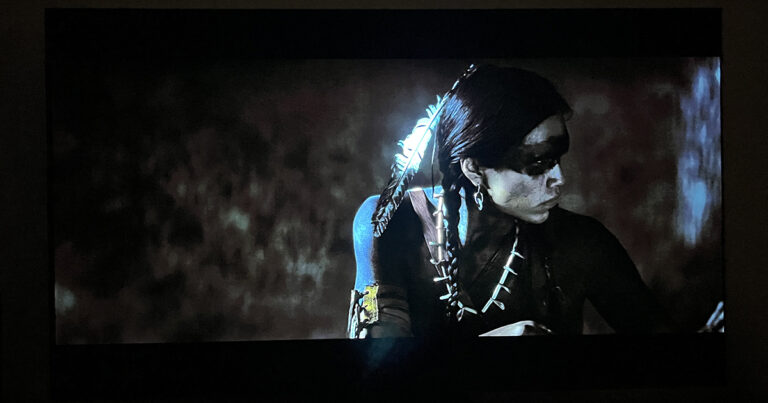 Switching the hotel downlights on cost the image a bit of contrast, and the TV started to pick up my reflection. 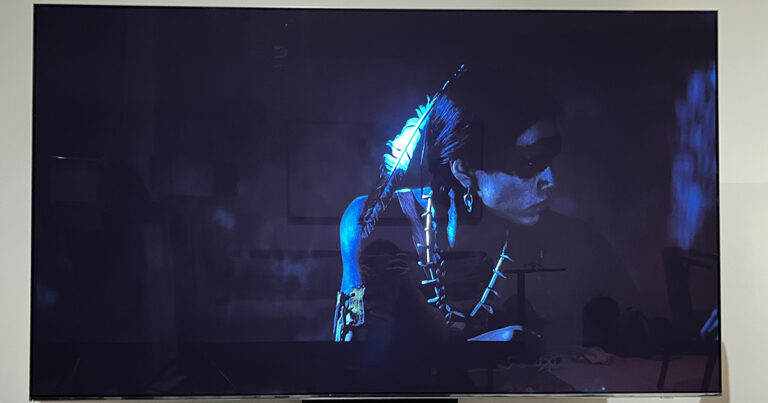 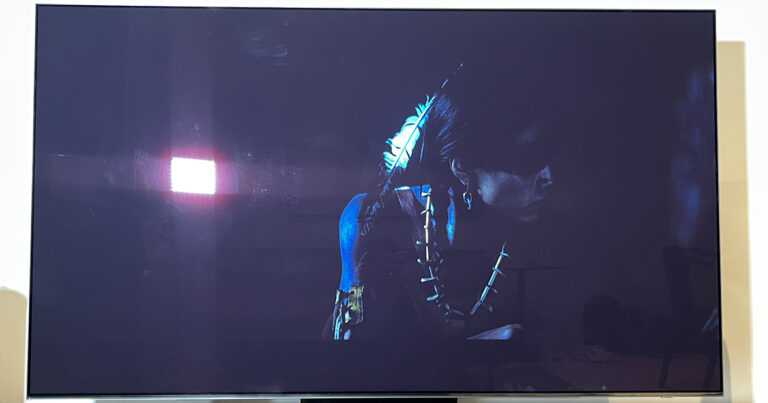 Adding the second studio light to the mix cost the shot all subtle details. I could still make out the overall, but it had none of the depth of when I was watching in the dark. 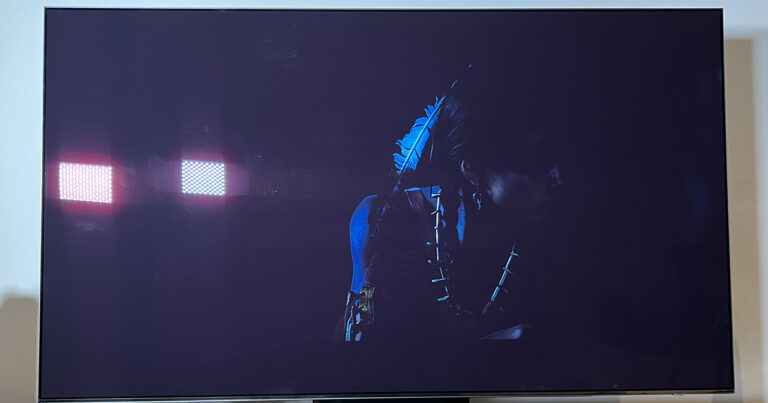 The increased peak brightness is nonetheless still important. I repeated the same torture test with my OLED at home, and blues in the shot are far dimmer (it only has a peak brightness of about 700 nits). While OLED TVs technically have infinite contrast due to being able to achieve true black, a higher peak brightness still allows for a more vivid and realistic image. You still just want to be in a dark room to experience it properly. 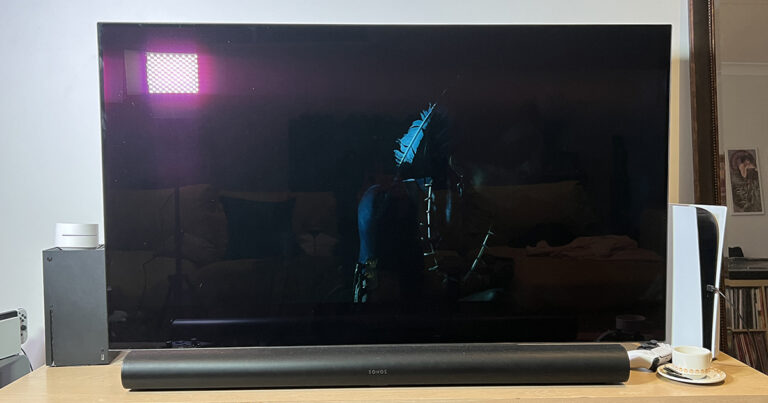 In less extreme situations, the S95B held up much better. When it came to brighter content (the Xbox Series X user interface, for example), the difference between using the TV in complete darkness and with two studio lights turned on was a lot less significant. Here's all the lights off: 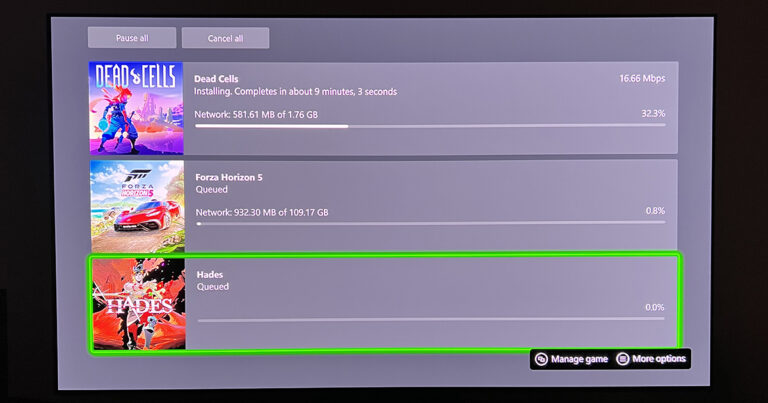 And here's what it looked like with them all switched on: 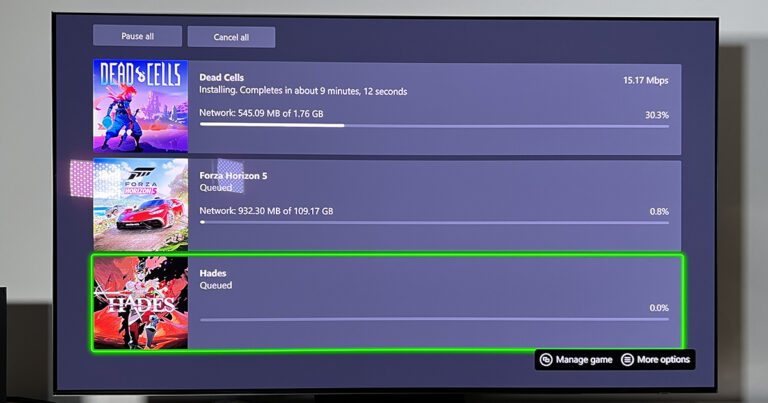 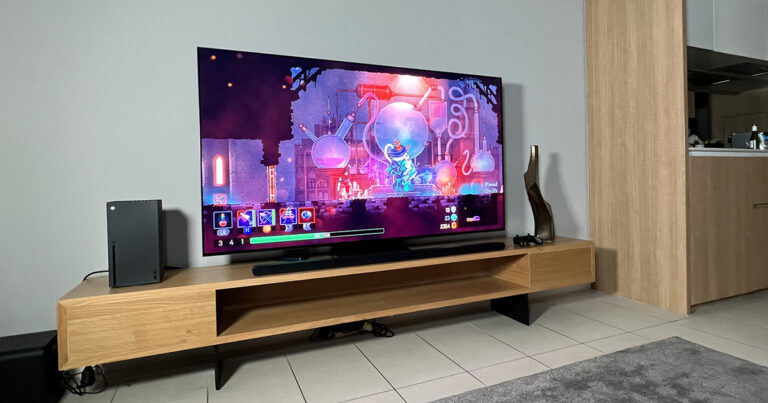 Looking more broadly, the S95B made a promising first impression. Colours seemed pretty natural on the "standard" setting, but I still had to turn off motion smoothing to get rid of the unnatural-looking "soap opera effect". The overall design is subtle and slim, but a back that juts out means the S95B isn't the best option for wall mounting. Samsung doesn't include its One Connect Box with S95B models, so cable management is also a bit trickier if you're intent on sticking it on your wall.

As with Samsung's other TVs, the S95B doesn't support Dolby Vision for HDR. That’s a shame given Dolby Vision is considered the best format for HDR video, making it a natural pairing for an OLED panel. You still get HDR10+ support, however.

The S95B OLED TV models are also part of Samsung's ecosystem play. If you pair one with a Samsung sound bar, the TV speakers work in conjunction with it to get an even larger sound. Samsung's new Galaxy Buds 2 Pro can automatically pair with it if you want a more personal audio experience. 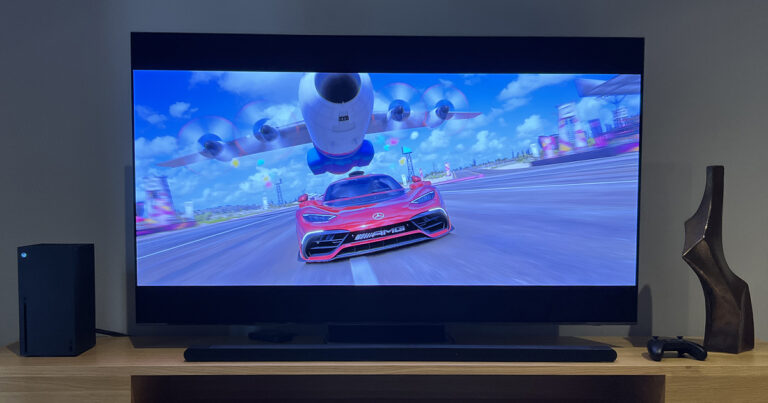 Samsung's S95B OLED is ultimately still an OLED TV. Even though it can offer higher peak brightness, you'll want to watch it in a dark room for the best possible experience. And that's fine. There are plenty of TVs that are more suited to bright environments, like Samsung's QLED range.

When it comes to the OLED front, Samsung's new models are exciting, even if from a competition perspective. For the last decade, LG has been the sole manufacturer of OLED TV panels. Samsung's presence in the space could lead to both better prices and further innovation, as we've seen with its Quantum Dot technology in the S95B.

While I didn't have quite enough time with the S95B OLED TV for a complete review, it certainly delivers on picture quality. Dolby Vision would have been nice to have, but otherwise, Samsung's S95Bs seem like a solid choice if you're predominantly watching in a dark environment. Less so if you’re illuminating a hotel room with studio lighting and fire.

Disclosure: This author tested the Samsung S95B OLED TV during an overnight stay in a hotel room as a guest of Samsung