You don’t need to be a security expert to make use of the easy-to-use Swann Xtreem Wireless Security Camera. 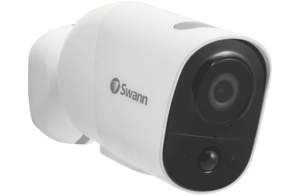 4
An easy-to-configure, easier-to-use smart security camera that won’t break the bank and can happily live inside or outside.
See price

By Nathan Lawrence
Editor-at-large
Read More
5 min read
Share Article
Quick verdict
There are a handful of quibbles that hold back the Swann Xtreem Wireless Security Camera from being wholly recommendable. But if you’re curious to try a wireless security camera that’s easy to set up and use, the price is right for the features you get with the Swann Xtreem.
Pros
Six months of battery life
Practical for inside, outside use
1080p camera
Included preinstall MicroSD card
Cons
No included charger
Muffled audio
Feed and standby delays
Long charging time

How much does the Swann Xtreem Wireless Security Camera cost in Australia?

The Swann Xtreem Wireless Security Camera is sold in a variety of configurations, which start at $199.95RRP for the single-camera version. This can be modified to include a solar charging panel, or the Xtreem can be bundled in three-packs or four-packs. In terms of the single-camera configuration that I was sent for review, there wasn’t a lot of money to be saved off the RRP at the time of writing, which you can see in the pricing table below.

It may be a relatively compact package, but it comes with a lot. Pop the lid to reveal (almost) everything you need to get going. There’s the Swann Xtreem Wireless Security Camera, which has an internal rechargeable battery and a preinstalled 16GB MicroSD card. You’ll also find a Micro USB charging cable, the magnetic mount, screws, documentation and stickers. The main thing it’s missing is a wall charger, but you can connect the Micro USB cable to a USB wall charger (from a smartphone or tablet) or charge it via a USB port on a computer. 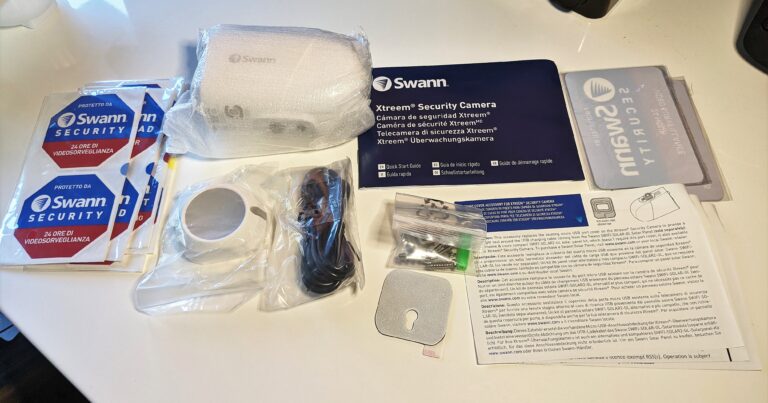 On the topic of charging, you’ll want some patience. I charged the Swann Xtreem Wireless Security Camera review unit via PC USB, which equates to an overnight wait if you want it fully charged. You’ll know it’s charged once the solid blue light on the front of the camera turns off. To get to the charging port, you’ll pop one of two rubber covers that are there to waterproof the device.

Outside of power, all the Xtreem really needs to get online and auto-configure itself is the details of your WiFi network. It’s a shame the Xtreem only supports the 2.4GHz WiFi band as including 5GHz support might have addressed some of the delay issues (more on these later). In fairness, it’s understandable that Swann would opt for the more ubiquitous, farther-reaching 2.4GHz wireless band, but it still feels like a missed opportunity.

When that blue charging light is finally off, your next step is to place the Xtreem. It needs to be in range of your router or modem-router, but you shouldn’t have to worry about power for a long time because Swann rates the fully charged battery life in the Xtreem for up to six months. For more permanent placement, snap the Xtreem onto the magnetic cradle then attach that cradle to the wall with a screw.

If you live in an apartment like me and aren’t allowed to make holes in things or have cameras placed on your balcony, the Xtreem happily sits inside on any flat surface. While the 110-degree field of view isn’t as wide as our 130-degree baseline for wireless security cameras, it’s still wide enough to cover a decent amount of space even when placed inside on a table, atop a cabinet or on shelves.

You can see a full list of the Swann Xtreem Wireless Security Camera specs below. For the price point, this is a particularly impressive array of specs, most noticeably the rechargeable battery, Full HD resolution and weather tolerance.

Security cameras aren’t as prevalent on or inside Australian homes as they are in other countries, but the Swann Xtreem Wireless Security Camera makes it easy to test the waters without having to worry about calling in an expert. For outdoors use, the function is more obvious—security—but the Xtreem has features that make non-security applications possible inside the home, too.

For starters, the inbuilt motion detecting means it’s viable for keeping an eye on little ones or furrier littler ones, as long as you have it set to alert you when something moves. Be warned, if this is in a high-traffic area, expect to be bombarded with push notifications. Setting the camera to Home mode rather than Away will fix this, but you can also tweak the motion-detecting sensitivity if you like. This functions mostly the same at night, albeit with the benefit of infrared night vision that’s rated to around eight metres of range.

If you’re trying to catch movement with immediacy, the Xtreem may disappoint because some patience is required. It takes a few seconds to load the Swann Security app, then up to 10 seconds to bring the Xtreem out of standby (and that’s if you don’t get the sporadic ‘device disconnected’ error). On top of this, if you’re doing any live interactions—listening to incoming audio or activating the microphone to communicate via the camera’s speaker—there’s a one-second delay between what you say and it actually transmitting.

Speaking of quality, the 1080p resolution feels closer to a lower bit-rate Full HD video stream rather than something with optimised quality. While this helps with preserving internal storage—it’s about 100KB per picture and roughly 1MB per 15 seconds of footage—pictures in particular have noticeable visual noise, even if faces are identifiable.

On the whole, this is an easy-to-use and convenient wireless camera system, but it’s a wee bit trickier on Android 11 devices (like the Google Pixel 5), which blocks easy in-app access to pictures and videos. These can be found in the Files app easily enough, though, which isn’t as convenient but is also only a couple of extra taps away.

It doesn’t feel like so long ago that the concept of upping home security came at the expense of a great monetary expense and either professional installation or confidence with power tools. Fast-forward to more recent times and the smart home revolution has mercifully bled into the security space, with all of the positive trimmings that implies.

Case in point, the Swann Xtreem Security Camera. This smart gizmo is appropriately priced, a cinch to set up and, by design, you can get away with placing it somewhere instead of having to drill. Naturally, if you own your home and don’t mind a smidge of power-tool handiwork, the Swann Xtreem is a drilled hole away from watching your home outside.

The Swann Xtreem is just at home sitting on a shelf inside as it is hanging on its magnetised housing outside, protected by robust waterproofing. In terms of cons, there’s no included charger and it takes a hefty amount of hours to fully charge, but you’ll technically only need to charge it twice a year. The camera audio is a bit muffled when placed on a flat surface and there’s a noticeable delay whether bringing the camera out of standby or watching the feed live, which likely could have been helped by including 5GHz band WiFi support alongside 2.4GHz. Outside of those cons, the Swann Xtreem is an otherwise great product.